15 year old girl from the Incan Empire who has been frozen for 500 years. (She was a sacrifice)

Most People know South America has the most beautiful women in the world. Sure, you can find 10s on any continent (there’s probably even...
Read more
Sports

Argentine footballer Lionel Messi who plays for Spanish club FC Barcelona has scored a whole lot of mesmerising goals. And right up there with...
Read more

A 500-year-old frozen Incan mummy known as ‘The Maiden’ was suffering from a bacterial infection when she died – and being able to ‘diagnose’ the disease could lead to new insights into diseases of the past.

The discovery could help defend against new illnesses – or the re-emergence of diseases of the past.

The mummy was suffering from an illness similar to tuberculosis when she was sacrificed on the Argentinian volcano Llullaillaco, 22,100 feet above sea level.

The find – using a new technique of swabbing the lips and comparing the swabs with those of current patients – is the first time a disease has been ‘diagnosed’ in such an ancient body. 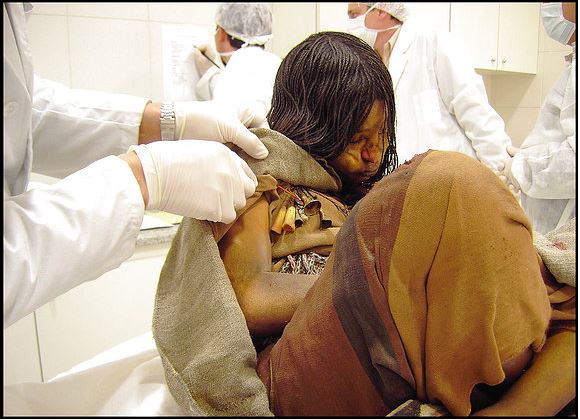 Ritual killings were common within the Incan culture. In 1999 three Children of Llullaillaco, who found deep frozen were found with an extraordinary collection of elaborate gold, silver and shell statues, textiles and pots containing food The children included a 13-year-old known as the ‘Llullaillaco Maiden’

‘Pathogen detection in ancient tissues isn’t new, but until now it’s been impossible to say whether the infectious agent was latent or active,’ says Corthals.

‘Our technique opens a new door to solving some of history’s biggest mysteries, such as the reasons why the flu of 1918 was so devastating. It will also enhance our understanding of our future’s greatest threats, such as the emergence of new infectious agents or re-emergence of known infectious diseases.’ 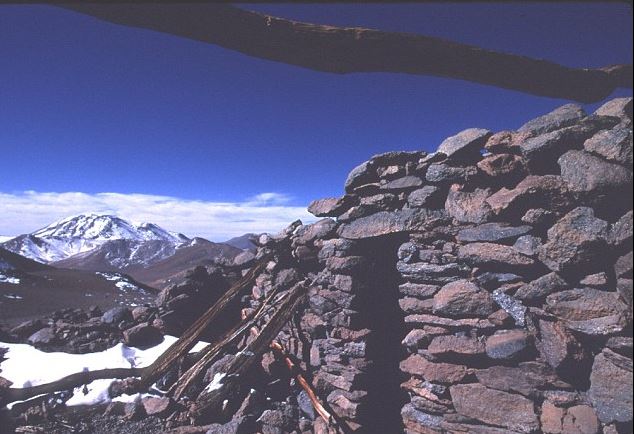 The place of sacrifice: The burial site of the three children on top of Llullaillaco Volcano

The analysis was possible because of the incredible preservation of the mummy, which is so well-preserved there were still lice in her hair.

The team swabbed the lips of two Andean Inca mummies, buried at 22,000-feet elevation and originally discovered in 1999, and compared the proteins they found to large databases of the human genome.

They found that the protein profile from the mummy of a 15-year old girl, called ‘The Maiden,’ was similar to that of chronic respiratory infection patients, and the analysis of the DNA showed the presence of probably pathogenic bacteria in the genus Mycobacterium, responsible for upper respiratory tract infections and tuberculosis. 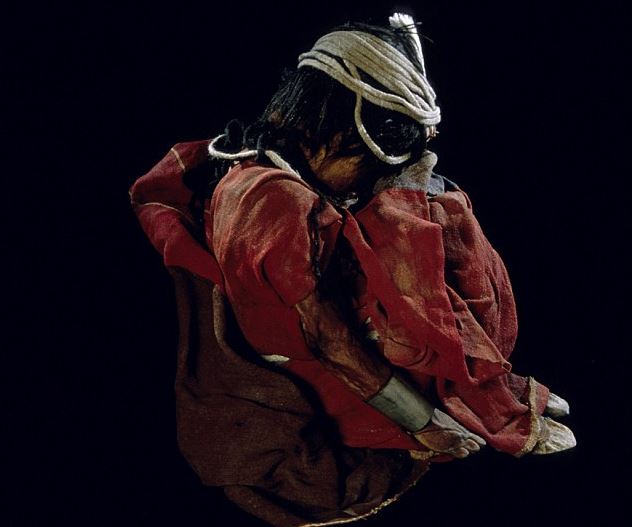 Child sacrifice was called capacocha. The process of capacocha could begin years before the selected person was killed. A mummified body of a child who was killed during one such sacrifice is pictured here

In addition, X-rays of the lungs of the Maiden showed signs of lung infection at the time of death.

‘The doctors have been shaking their heads and saying they sure don’t look 500 years old but as if they’d died a few weeks ago,’ said U.S. archaeologist and expedition member Johan Reinhard at the time.

‘And a chill went down my spine the first time I saw her hands because they look like those of a person who is alive.’

It’s thought that the children were chosen by the Incas for their beauty and sacrificed in a ceremony called a capacocha.

‘The Incas didn’t do this very often,’ according to Reinhard.

‘The sacrifices were children because they were considered to be the most pure.’

They were not sacrificed to feed or appease the gods but, rather, ‘to enter the realm of the gods and live in paradise with them. It was considered a great honour, a transition to a better life from which they would be expected to remain in contact with the community through shamans (holy men).

The Incas believed that by scaling the snow-topped heights of the mountains they could get closer to the heavens and communicate better with the gods.

Detecting diseases in ancient remains is often fraught with difficulty, especially because of contamination.

Techniques based on microbe DNA can easily be confused by environmental contamination, and they can only confirm that the pathogen was present, not that the person was infected, but the researchers behind the study, led by Angelique Corthals of the John Jay College of Criminal Justice, City University of New York, found a way around this problem.

They used proteomics, focusing on protein rather than DNA remains, to profile immune system response from degraded samples taken from 500 year-old mummies.

Proteomics, DNA, and x-rays from another mummy found together with the Maiden did not show signs of respiratory infection.

‘Our study is the first of its kind since rather than looking for the pathogen, which is notoriously difficult to do in historical samples, we are looking at the immune system protein profile of the ‘patient’, which more accurately tells us that there was indeed an infection at the time of death.’ or

‘Our study opens the door to solving many historical and current biomedical and forensic mysteries, from understanding why the plague of 1918 was so lethal, to finding out which pathogen is responsible for death in cases of multiple infections.’

THE ICE MAIDEN: MYSTERY OF THE THREE UNIQUE MUMMIES FOUND FROZEN HIGH IN THE ANDES

Along with the remains of two younger children, the teenager was plucked from the slopes of a cloudswept volcano in 1999 by a team who battled for three days through driving blizzards and 70mph winds to reach the summit 22,000ft above sea level.

There, the archaeologists spotted a rectangular walled area, dug down through five feet of rocks and soil and finally uncovered an Incan burial platform.

One of the team was lowered headfirst into the icy pit, his colleagues hanging onto his ankles, so that he could scrape away the soil and pull the dead children out with his hands.

The three Children of Llullaillaco, as the mummies came to be known after the mountain on which they met their death, were found with an extraordinary collection of elaborate gold, silver and shell statues, textiles, pots containing food and even an extravagant headdress made from the white feathers of an unidentified bird.

But it was the state of the bodies, preserved not by embalming, like Egyptian mummies, but simply by the natural deep-freeze in which they were abandoned, that scientists found most remarkable.

The U.S. came within seconds of booking their place in the round of 16 of the 2014 World Cup after Varela scored just before...
Read more

They Quit Their Job And Took A Moto...

These are pictures from their journey with two motorbikes to Mongolia. Pieter and Mandy and in early 2014 quit their jobs to left their home...
Read more

Belarus? It's a former Soviet Republic located in Eastern Europe. For this top ten article we are showcasing some of the most beautiful, hot...
Read more

How to make a good student business card

Today, a business card is the most powerful advertising tool of many successful companies. Most firms use business cards...
Read more

12 Pictures Which Are A Photographic Celebration Of...

London based photographer duo Amit and Naroop recently embarked on an ambitious project titled "Singh" to capture and celebrate the identity and magnificence of British Sikh...
Read more

How to file an RTI plea?- Step By Step Procedure The Act prescribes a simple procedure to obtain information. Though some public authorities have their...
Read more
Load more