19 Real Places on Our Planet That Don’t Look Real !

Most of us are so used to our surroundings, we have no idea that there are fantastic and unreal places in other parts of the world. Whether it’s natural formations like Mount Roraima and the Black Forest or man-made wonders like the Tunnel of Love or Rådhuset metro station, these places have to be seen to believe.

Don’t let your eyes deceive you, though. While these places may look like something out of a fairytale or sci-fi movie–or even something wholly Photoshopped–we assure you: they’re real. And, best of all, you can visit most of them. File away this list if you’re planning world travel soon.

Read on for therichest's list 19 places on Earth that don’t look real–but are!

These pretty hills couldn’t be real, right? Well, they are! You can find them in the Zhangye Danxia National Geographic Park in the northwestern Gansu province of China. The hills feature colorful deposits of sandstone, called Danxia landforms, that have been forming for 24 million years. Although these aren’t the only Danxia in China, they were voted the most beautiful according to Chinese National Geography. 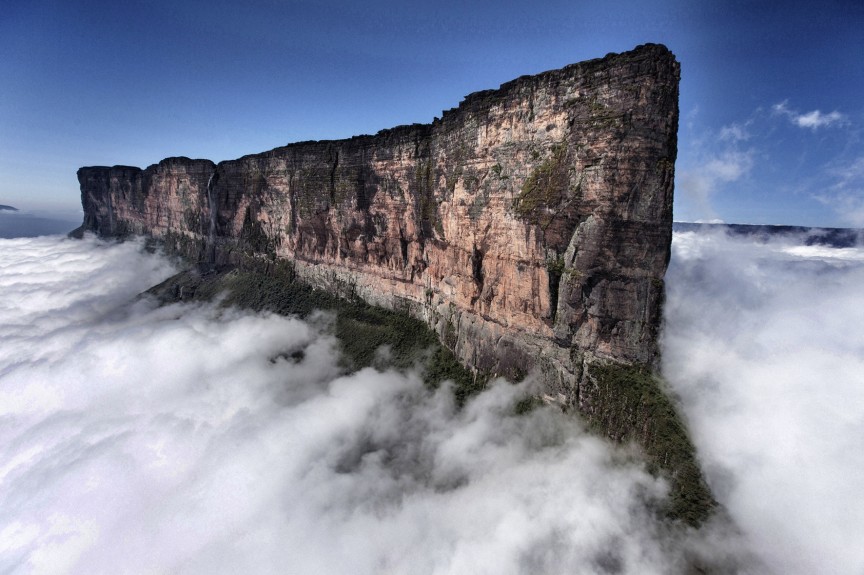 Like something out of a fantasy novel, the flat summit of Mount Roraima hovers above the clouds, 1,300 feet from the lands below. Though over 80% of this mountain–a part of a chain of plateaus–resides in Venezuela, it’s actually at the point where Venezuela, Brazil and Guyana meet. Still, if you want to hike up to the summit with the other hardcore backpackers, you’ll have to come up from the Venezuelan side. While you’re in Klevan, Ukraine, visiting the historic Klevan Castle or the Church of Nativity, don’t miss the Tunnel of Love. Tourists can take a walk through this lush, overgrown tunnel as they whisper sweet-nothings into each others’ ears. The tunnel is 3 kilometers long–just enough time to propose. 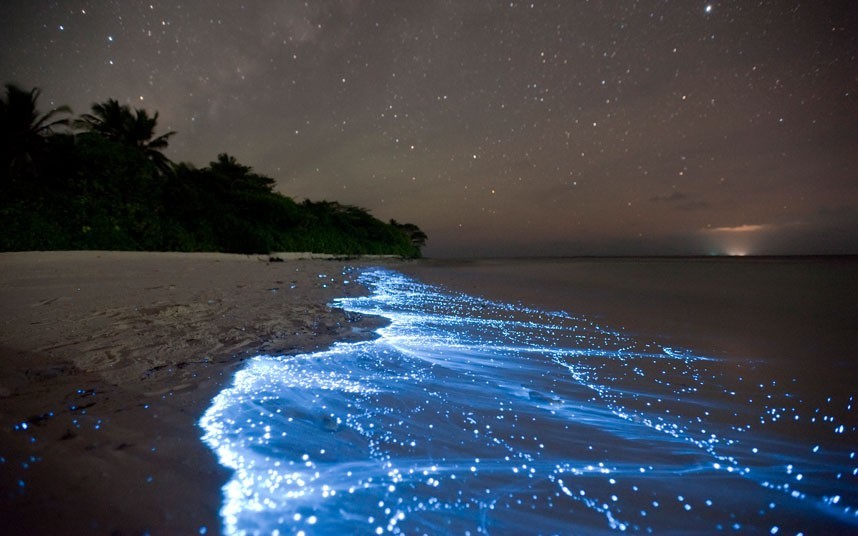 No, this isn’t a scene from Life of Pi. Located in Vieques, Puerto Rico, the Bioluminescent Bay features real micro-organisms that glow neon blue at night, especially when the water is jostled. You can even rent a kayak to float through the glowing sea at night. Don’t forget your camera! 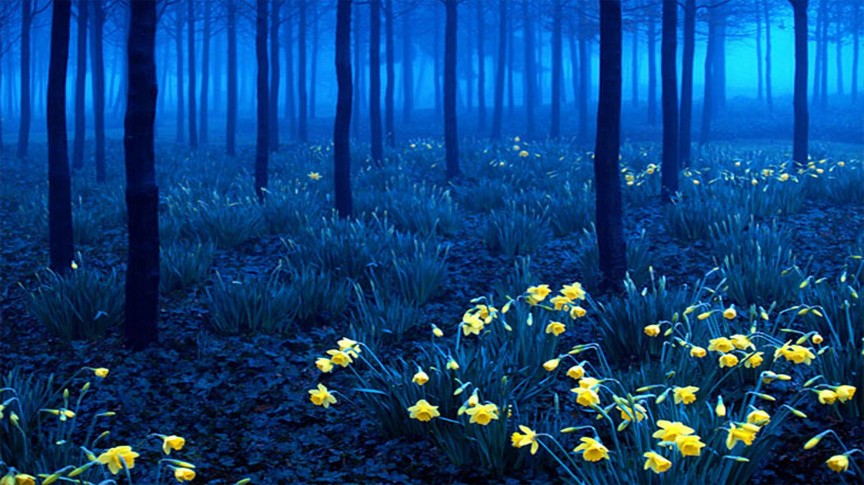 There’s a lot to do in the Black Forest mountain range located in the southwest corner of Germany. But, if you’re dazzled by the colorful picture above, then you’re probably there for the forest itself. Spring, summer and autumn are the best times for hiking, although you’ll only see flowers like these in the spring. 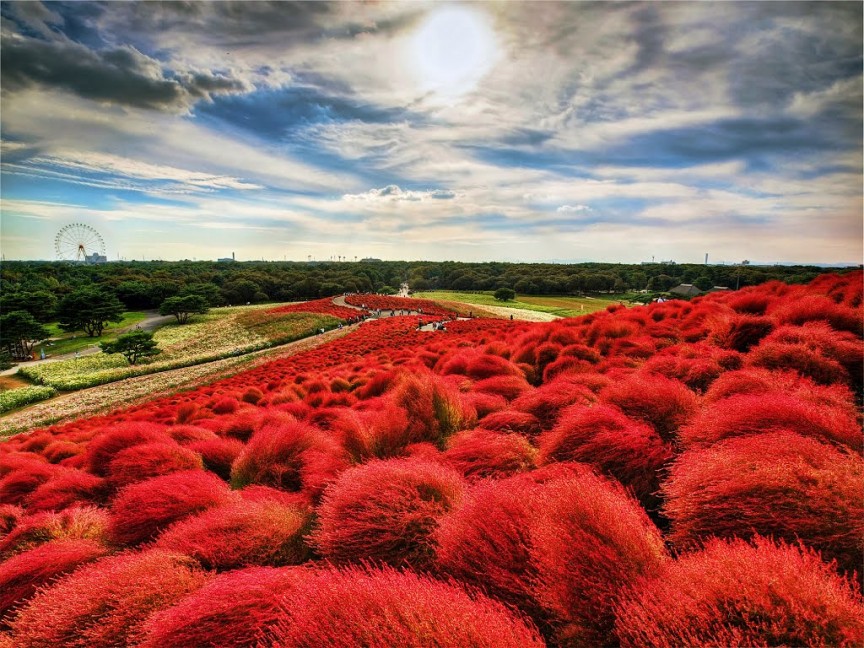 As a visitor of Hitachi Seaside Park, you can walk among the Bassia scoparia, colorful bushes that turn bright red in the fall. It doesn’t get much more colorful than the daffodils and tulips that brighten up the park. Visitors that aren’t into walking can see the colorful plants from atop the amusement park ferris wheel. New Zeland is known for its beautiful landscapes as well as for the filming of the Lord of the Rings. Even though the original set was destroyed after the conclusion of the trilogy, the set was rebuilt and is now open to the public to visit. You can wander the gardens and visit the Hobbiton, home to Frodo and the Shite. This wonder located in Matamata is one of the most magical places to see. 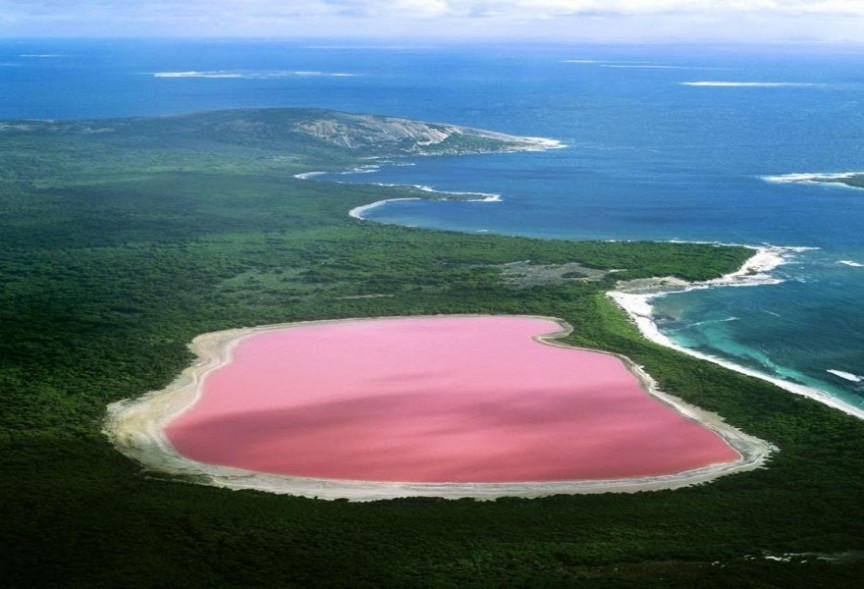 No, this isn’t a camera trick or a healthy dose of Photoshop magic–this pink lake is real! The Australian lake, 600 meters long, is a bit of a mystery. Scientists haven’t come up with a definitive reason why this salt lake is pink, but they do have plenty of theories.

Fun fact: This isn’t the only pink lake in the world, many countries such as Senegal, Canada, Spain and Azerbaijan also have pink lakes. 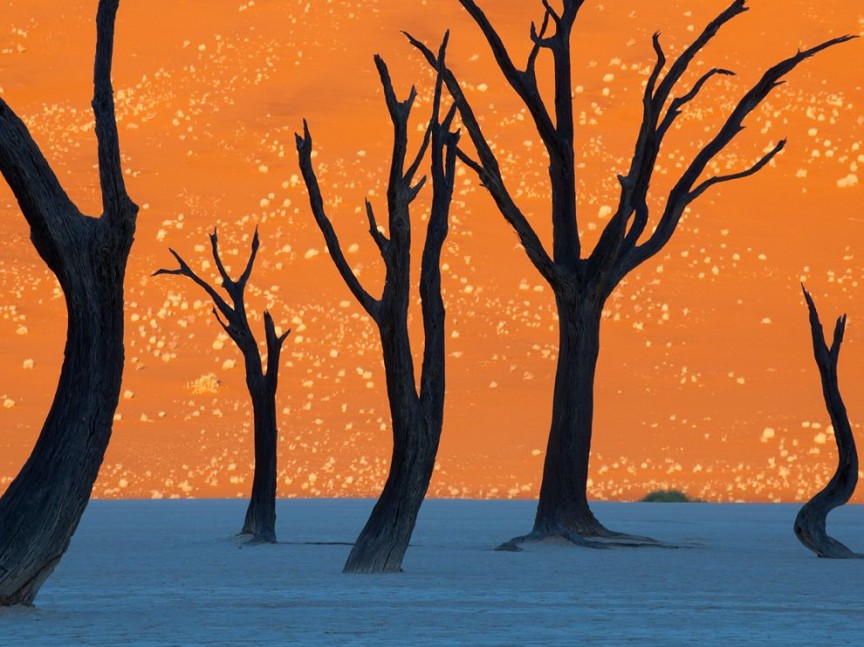 This picture looks like a painting. After all, how could something so colorful and graphic be real? But it is! This shot, taken by National Geographic photographer Frans Lanting, shows the camel thorn trees in Naukluft Park, Namibia. The dune beyond these shaded trees is bright orange from the light of the morning sun. 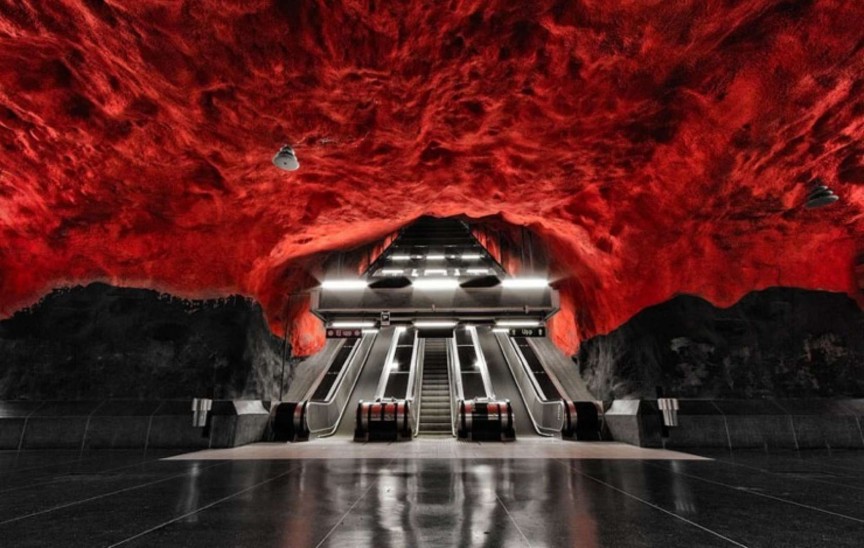 Imagine going into the subway train station on your way to your next destination–and all of a sudden you’re shocked that you are in an underground cave. That was the reaction designers were looking for when they designed the Rådhuset metro station, located in Stockholm, Sweden, to look like a colorful and artistic cavern. Do you think the locals are used to it by now? 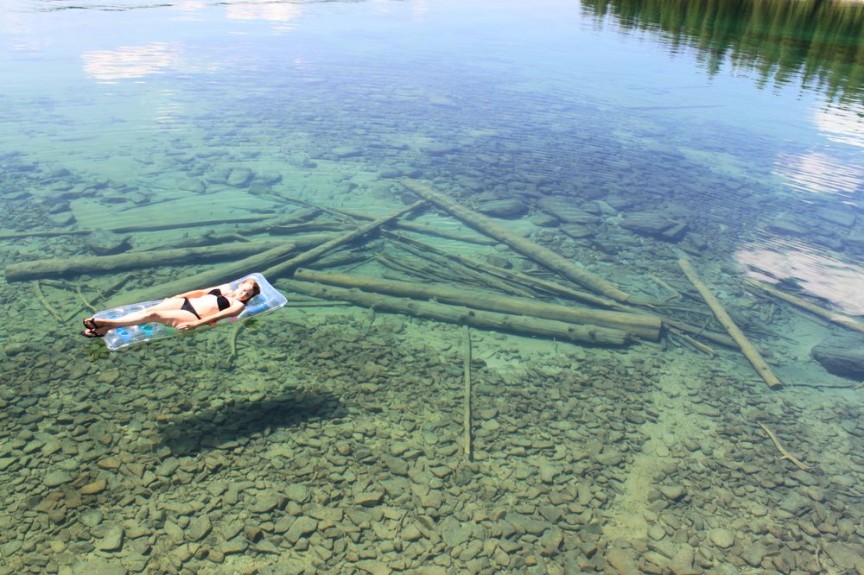 The largest American freshwater lake west of the Mississippi River happens to be located in Northwest Montana. Flathead Lake has a surface area of nearly two miles. When the water is still, the water is so clear that you can see all the way to the bottom–hence why these lady looks as if she’s floating in mid-air. If you want to swim in a trippy place, this is always a good choice. 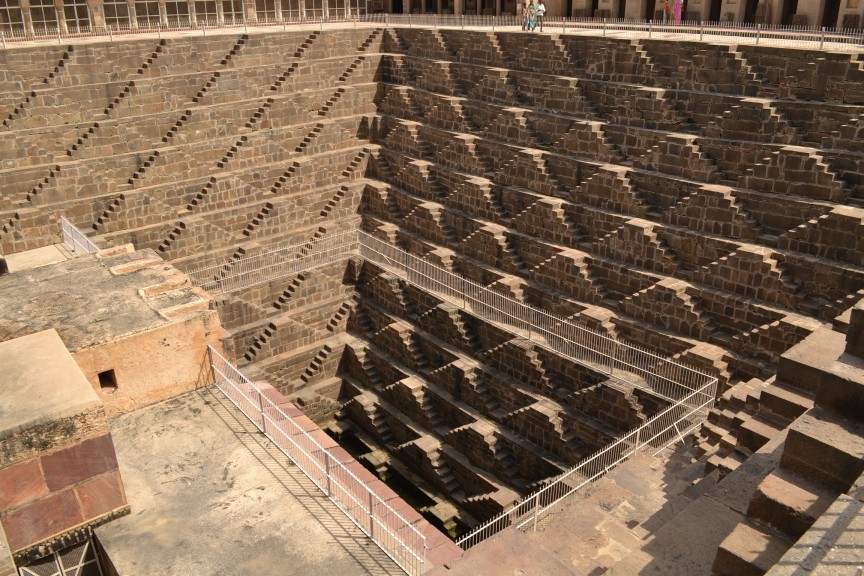 Your eyes aren’t playing tricks on you. Chand Boari in Abhaneri, India is just as epic as it seems. With 3,500 steps and 13 stories, this super deep stepwell was built between 800 and 900 AD by King Chanda. While it was originally used as a well, it’s now a popular attraction for tourists. 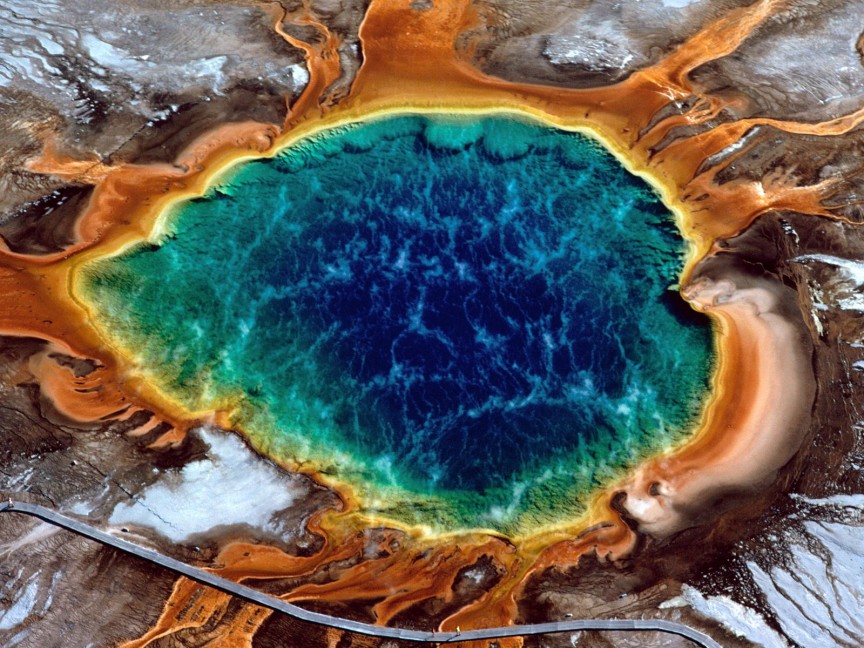 Though it looks like something you’d find on another planet, the Grand Prismatic Spring is located right here on Earth. Visit Yellowstone National Park in Wyoming, USA to see this colorful and steamy hot spring. 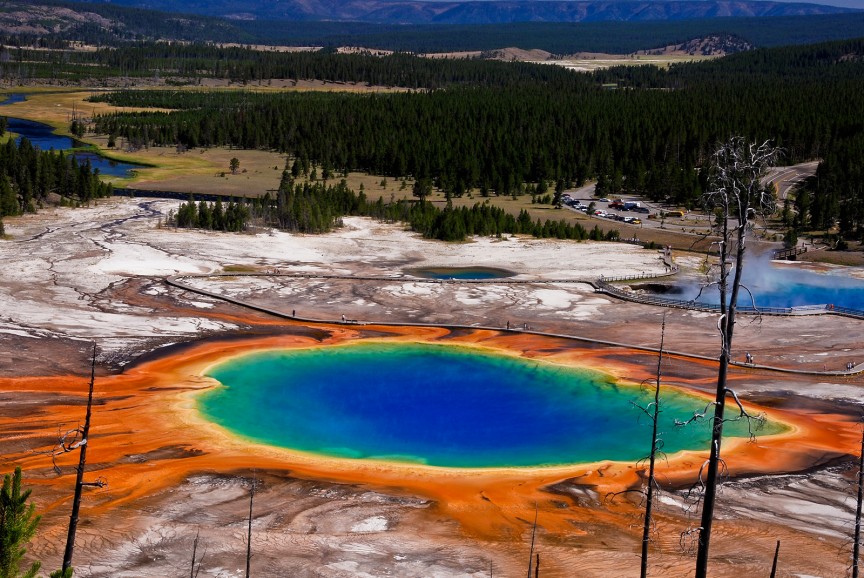 In fact, it’s the largest hot spring in the United States and the third largest in the world. Sometimes mistakes can be beautiful (and scary). The locally-named Door to Hell near Derweze, Turkmenistan is a fiery hole in the ground that has been burning steadily for over four decades with no signs of stopping. That’s because the workers in charge of the underground natural gas fields thought it was safer to burn it off in 1971 rather than risk workers trying to extract it. Fans of the video game series Silent Hill are well aware of the spooky atmosphere of the foggy town where some serious horrors occur. But, you may be surprised to know that the fictional town of Silent Hill is actually based on a real near-ghost town Centralia, Pennsylvania. Why all the smoke seeping out of cracks around town? A local underground coal mine caught on fire in 1962 and wasn’t fully extinguished, causing the roads to be smoking ever since. One look at the Crystal Caves of Skaftafell, Iceland, and you’ll think you’re in another world. But don’t let the name fool you. These beautiful formations aren’t made of crystal–they’re ice! You can see these ice caves in person during the winter months. There are tours that give you all the winter gear you need, as well as a guide. This is just one of many colorful and amazing pictures of the tulip fields in Holland. Holland has a huge business when it comes to tulip farms, and anyone who comes by can get the benefit of seeing them grow (or snapping an unbelievable picture). The flowers are at their peak in mid-April. We’ve all seen scenery like this before, right? Usually on the cover of a fantasy book or in some pivotal nature-based fight scene in a movie. But, guess what? It’s real! These are the Tianzi Mountains in the Hunan Province of China. The huge marble spires soar thousands of feet from the ground below. Visitors can take a cable car if they want to see it up close and personal.