The ultra rich keep getting ultra richer. Shouldn’t we start to worry?

Machine Learning and Big Data – How to disrupt markets with it?

The past buzz words "big data" and "machine learning" are incredibly powerful now and have immense future potential. We treat “big data” and “machine...
Read more

Yesterday the Boston Consulting Group released its 15th annual Global Wealth Report entitled "Winning the Growth Game" that reads like a series of steamy vignettes in wealth management porn. Although the Asia-Pacific region hogged the headlines with news that it has overtaken Europe as the second-largest repository of private wealth and will likely overtake North America in 2016, the ultra-high-net-worth households (with more than $100 million in wealth) are the real winners in the growth game, adding 11% to their wealth in 2014. A compound average growth rate of 12% is expected through 2019 that will take the bounty of the ultra rich to $18 trillion or 212,000 Kim Kardashians.

Oxfam predicts that in 2016, unless trends in inequality are checked, the combined wealth of the richest 1 percent will overtake that of the other 99 percent of people.

The ultra rich are getting ultra richer and it seems that no one can stop it. In fact, many of us are cheering them on. Every time we give a thumbs up to another ultra-rich money shot on LinkedIn–a superyacht or a megadiamond or a private jet that would make Marie Antoinette swoon–we are rooting for the team that needs only a few well-placed likes, people who think of the rest of us as an amorphous blob of shiftlessness festooned with garlands of gauche.

All those smelly people… (Barbara Amiel vows that she will never go to a public cinema again!)

Last week, billionaire Johann Rupert, the founder and chairman of Richemont–which counts Cartier, Piaget and Montblanc among its business holdings–regaled an ultra-rich audience at the Business of Luxury Summit in Monaco with these unwelcome words…

We cannot have 0.1 percent of 0.1 percent taking all the spoils. It’s unfair and it is not sustainable.

Rupert predicts that artificial intelligence and robotics will cut a swathe through the work force rendering many unemployable and dangerously widening the gap between the ultra rich and ultra poor. This is what keeps Johann Rupert awake at night…

Yeah! Yeah! Usher is United against Poverty. Leave the Jag and take the Rolls, I got over three hundred thousand on my pinky. Don't you worry, Shawty. Usher's going to solve the problem of inequality. He's such a good kisser.

Funny how fast the conversation goes from dystopian visions of class warfare to sexy supersonic jets, $40,000 aspirational televisions and Usher. That's what happens when you look for objective commentary on income inequality from an optimistic former advisor to the Saudi royal family who is stuck like a barnacle to the ultra rich. According to the 2015 Wealth Report from Knight Frank, 21% of the ultra rich will increase their philanthropic activities this year while 30% will increase their purchases of luxury goods.

Here's a bit of context: 40% of ultra-high-net-worth philanthropic donations go to education–mostly Ivy League schools such as Harvard where the donor feels an "affinity for the brand"–and only 9% to organizations of public or social benefit.

So if Johann Rupert's dire warnings don't alarm them and philanthropy gives them the warm fuzzies, is there anything that scares the ultra rich? Seeing a Ford Focus, a Wal-Mart or a pair of Dockers, perhaps? No, no, no… 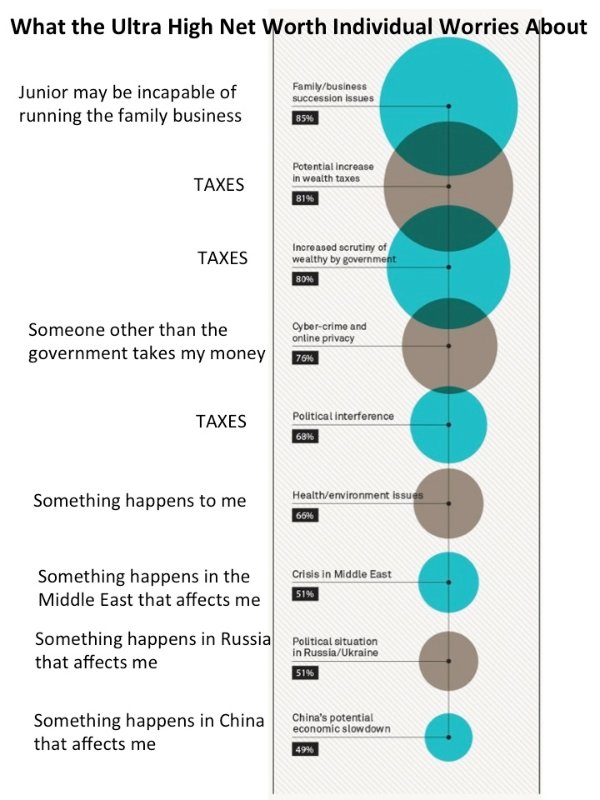 According to Knight Frank, what the ultra rich fear is taxation. Just as some of us applaud the beauty of their passion purchases, many more side with the mega-monied class in an aversion to taxes. We complain that the roads are falling apart, hospitals are in ruin and schools are crumbling and in the next breath complain about taxes as if taxes are the penalties that the government levies for the crime of being a citizen and not the means to make a country liveable for everyone. Taxes are not too high. They are too low.

I wish that I paid more taxes and that the ultra wealthy paid more too so that the widening gap of inequality can be bridged with the creation of a more robust and skilled middle class. As Johann Rupert warns, an uprising is brewing, but if it comes it's not going to affect the ultra rich in their impenetrable castles surrounded by moats of money and barbed comments.

Yeah! Yeah! When the class war breaks out we can call Usher.

About the Author: Lynne Everatt is a former Globe and Mail Careers columnist, canfitpro-certified personal trainer and the author of two books, Drink Wine and Giggle and Emails from the Edge (nominated for the Stephen Leacock award for humour). She's bummed that the ultra rich are driving up the price of Picassos.

Children are very nice, but when they are young they are more than adorable, and this has been proven repeatedly in videos that have...
Read more

Time travel's been one of man's wildest fantasies for centuries. It's long been a popular trend in movies and fiction. Time travel is one...
Read more

Neha Sharma is an Indian film actress and model. A native of Bihar, Sharma attended the Mount Carmel School in Bhagalpur and pursued a...
Read more

23 Photos Of Animals And Their Parents That...

The “Violence Against Women” Ad That Will Haunt...

Help us put an end to one of the most painful aspects of violence against women: silence.   The Instituto Maria da Penha is a non-profit...
Read more