Mystery of Sea Monster Found In New Zealand is Solved

Time travel’s been one of man’s wildest fantasies for centuries. It’s long been a popular trend in movies and fiction. Time travel is one of the most mysterious science fiction theories that people have. Many believe the government hast the ability to time travel but aren’t yet sharing it with the public. Others believe that there’s no way time travel is possible and that if it were, we would know by now because we would have been contacted by someone from the future! But perhaps we have! Every so often, someone might notice a picture that just doesn’t seem right throughout history. Here is a collection of those pictures that prove that time travel exists! You won’t believe that these aren’t fake! 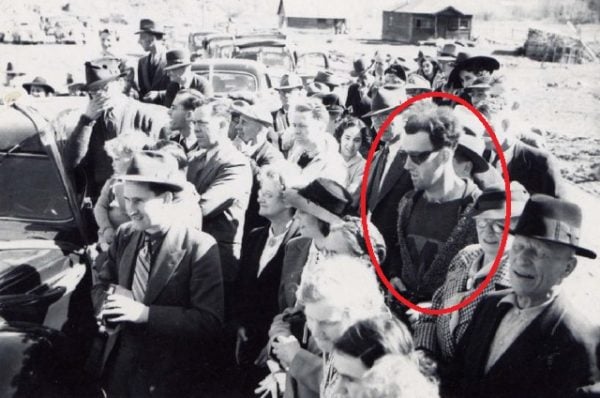 This was one of the first photographs to appear that made people really think that time travel is possible. Many of the men are wearing hats and professional looking clothing while this guy has a sweater and a t-shirt on. He’s also rocking some seriously modern shades and even has a pocket sized camera around his neck! Is that woman holding a cell phone? This picture was taken behind the scenes of a Charlie Chaplin movie. The woman is acting pretty secretive and holding something like we would hold a cell phone today. However, if she really did have a phone, I’m sure she’d have terrible, reception during a time that there aren’t cell towers in every city. 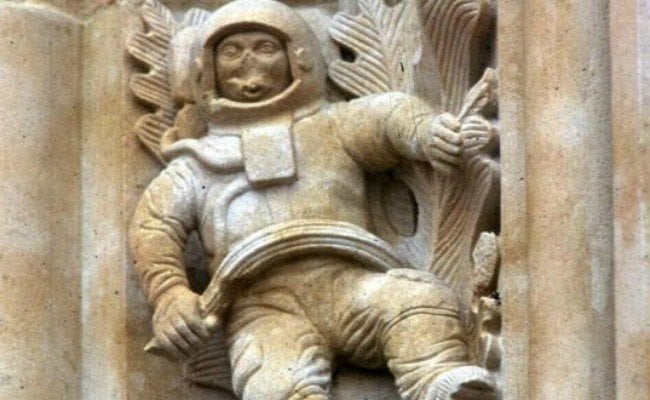 This sculpture of an astronaut can be seen on a church building that was built between the 1600s and 1800s. Why on Earth would they have such a sculpture on this building? Were they visited by a time travelling astronaut? Or did someone have a wild imagination about space travel ahead of their time? If you thought that was weird, you will really freak about on this next one… 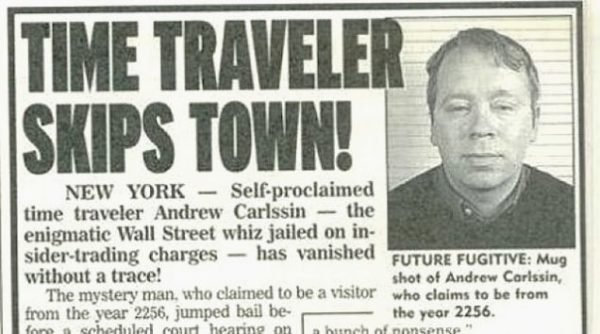 This newspaper covered a story of an investor who claimed to be from the year 2256! He was jailed on sider-trading charges but then suddenly vanished! The man does even look to be a bit more modern looking than his time, but we may never know! Or maybe we will in 2256 when someone comes back from the past to tell the tale! The picture on the left is of the well-known actor Nicolas Cage, and many believe the picture on the right to be that as well! The picture surfaced on eBay claiming to be proof that the actor is able to travel time! The evidence could be yours as well for just the low price of one million dollars. 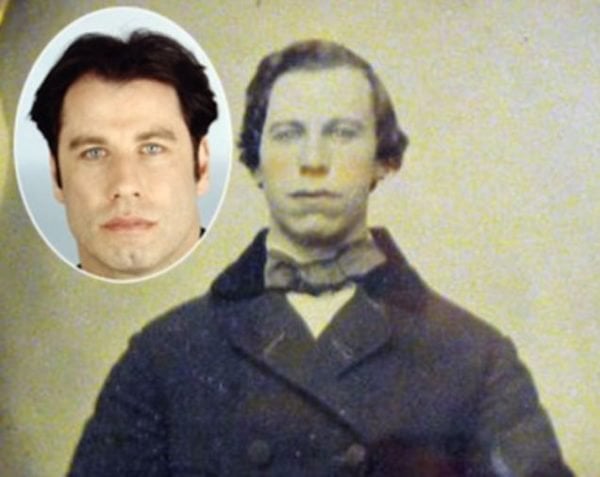 This picture surfaced online of the actor John Travolta as well. Aside from time travel, it could also just be proof that John has some pretty strong genes in his family. If not that either, then he’s some sort of vampire or other mythological timeless being. Either way, this is one freaky picture, time travel or not. 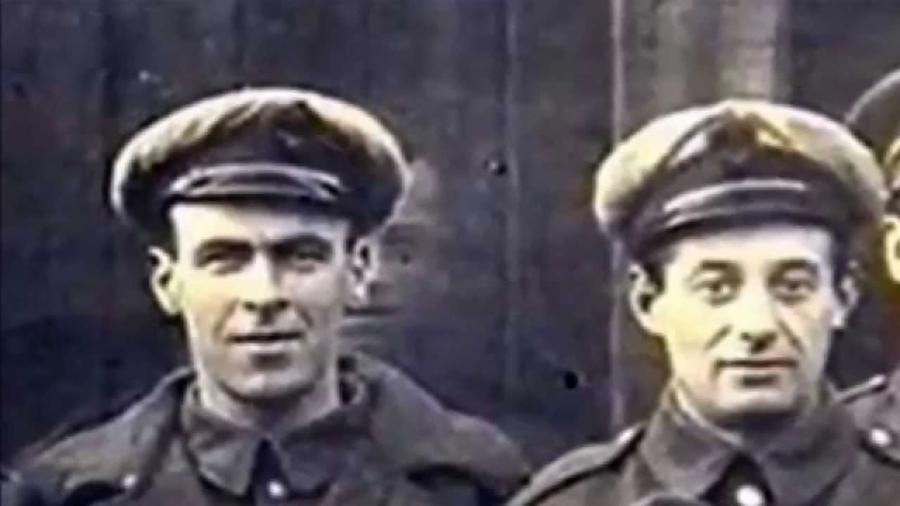 Sir Victor Goddard was a respected person who claimed to the public that he had travelled to 1935. There, he saw a vision of an airfield as it would be in the future! He either was telling the truth or had a serious case of deja vu! It is still pretty spooky! If you thought that was spooky, check out this time travel story involving a tattoo… 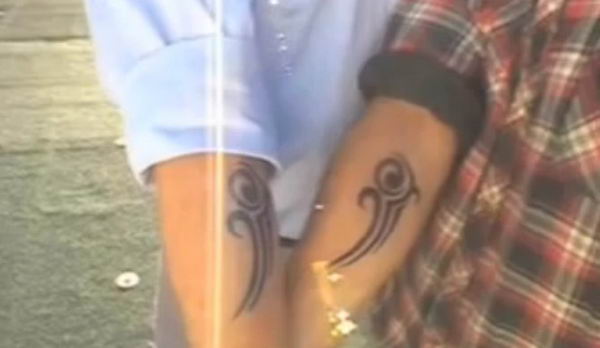 A Swedish man claimed that in 2006, he was able to travel to the future through a portal under his kitchen sink! Because that’s where most time travel portals exist. He met his future self, taking a picture of their matching tattoos as proof of their real meeting! Funny he didn’t take a picture of their faces, though… If you’ve seen the movie, Safety Not Guaranteed, then you’ll recognize this newspaper clipping. But before the movie, this actually was a real ad in a newspaper with no explanation! The movie was based on the actual 1997 classified ad! No other news was reported on the ad, but the movie was pretty good. 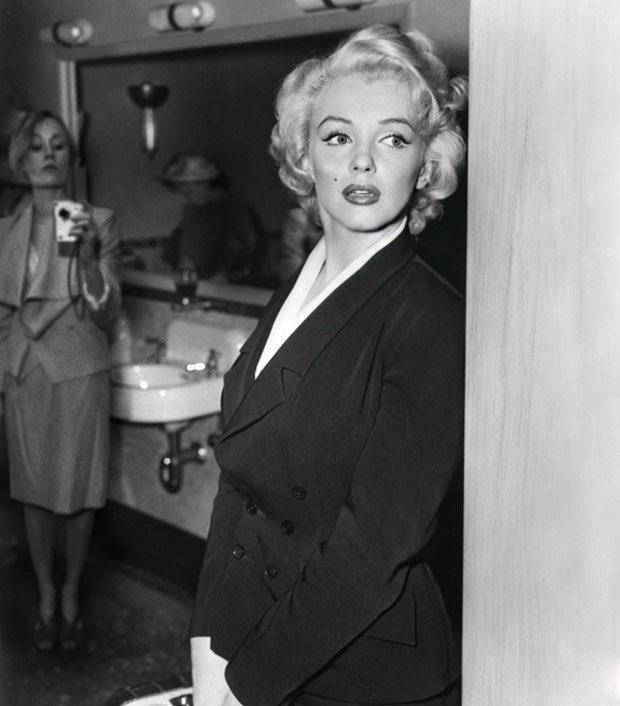 The woman in the above image is seen attempting to take a photograph of Marilyn Monroe. The spooky part? That’s a pretty modern device for her time! In fact, it even looks like an iPhone! Not like she could travel back and Instagram it, though, cause, you know, she’d have to tell people how she got the pic in the first place!

One strange unexplained story about time travel happened in 1901 in a small chateau in Versailles. During an August evening, two academics claimed that Marie Antoinette herself joined them for the night! Either they spent time with a ghost, or Marie has been enjoying time traveling around since her death! Next, a military tactic with a strange twist as the result… 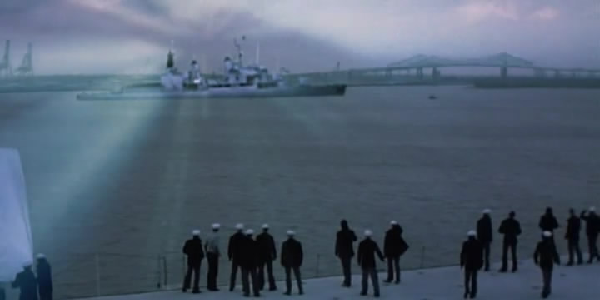 The Philadelphia Experiment was an experiment that took place in 1943. The purpose was to attempt to make the USS Eldridge invisible to enemy radar. Instead, it is rumored that the ship was sent to a different time for ten whole seconds! The ship even had a crew on it that are said to have time traveled as well! 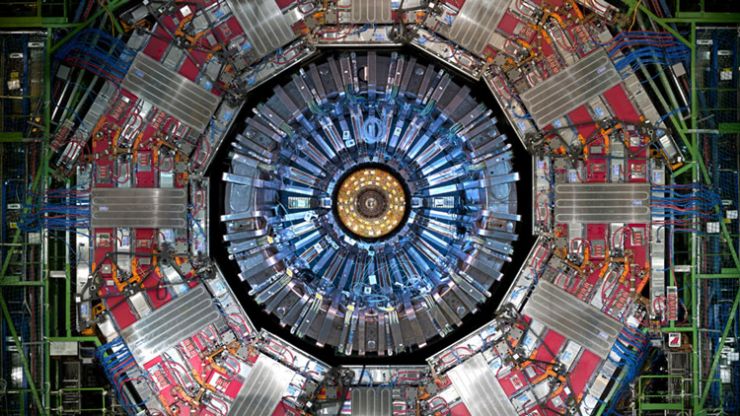 The LHC is one of the most complex pieces of machinery ever made by man. it has a 17-mile circumference, goes over 500 feet underground, and is the most powerful atom smasher that has ever been created in the world. It is said to have the ability to create a black hole, and might also have the capability to time travel! 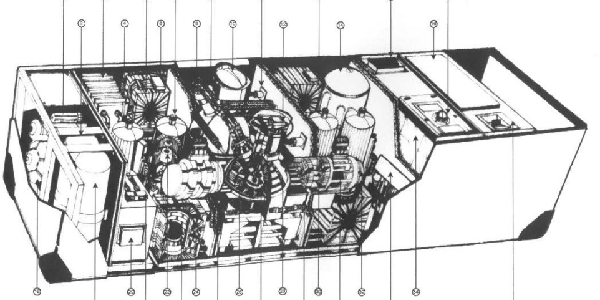 John Titor is known as the world’s most famous time traveller! He had some very vague predictions but also some specific ones as well! He claimed that America was on its way of breaking into five smaller regions. In the future, the environment and infrastructure become devastated by nuclear attacks, while most of the rest of the other world powers have been destroyed. 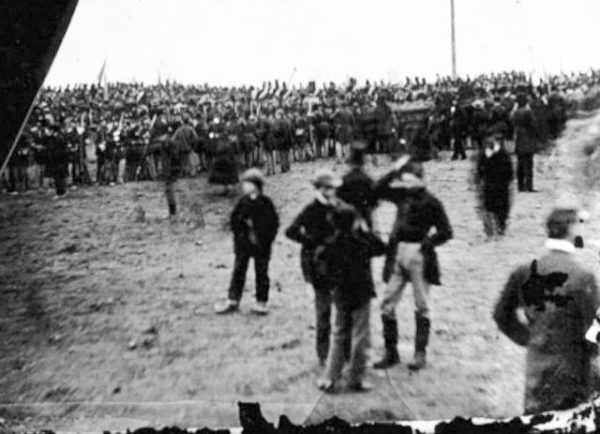 This photo was taken during Abraham Lincoln’s famous 1863 Gettysburg Address. The boy standing at center left looking to his right is a man named Basagio, who claimed he time travelled all the way back from 1970s New Jersey. He also claims that he lost his shoes while travelling the quantum plenum. Remember to bring an extra pair of shoes the next time you time travel. 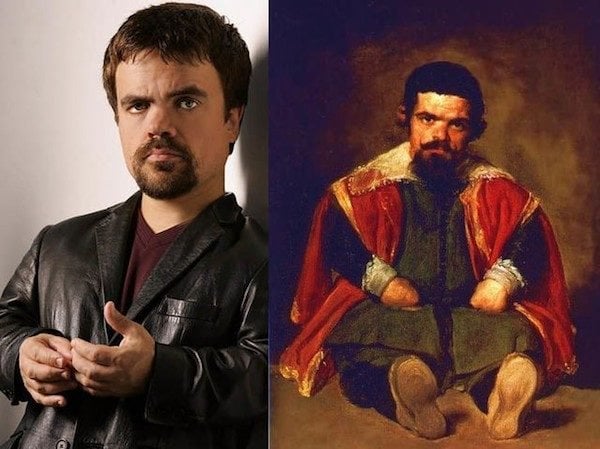 Yet again we see ourselves with another time travelling actor! There is no denying that these two are almost identical! Perhaps Peter Dinklage is so good at his role on the HBO series “Game of Thrones” because he actually lived through a monarchy at some pint in his life! What are these actor’s secrets? Now for an even spookier time traveler… 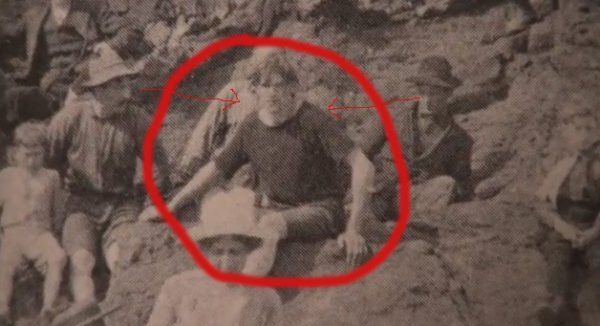 The man circled in the photo appears to no doubt be out of place. He is wearing a t-shirt and has long disheveled hair while everyone around him is wearing typical 1917’s pioneer clothes. The photo is published in the book, “The Cape Scott Story.” No one knows who the man is and the case has been a mystery! 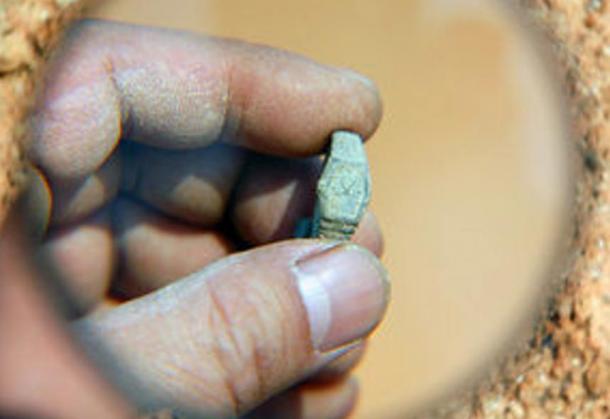 Chinese archaeologists found a small metal watch after opening a giant coffin they discovered in 2008. The coffin was that of Si Qing and had been undisturbed for 400 years. The most shocking part of the discovery? The watch was stopped at 10:06 and had ‘Swiss’ engraved on the back! What do you think? Real, or not?

Some of these photos may not be time travel, but the mysteries around them are no doubt enough to make us definitely question the process. Some people claim they have travelled time, which is enough to make us think about it, but they can certainly be hard to believe. Finding strange objects and carvings of futuristic items might be the most chilling of all the possible pieces of evidence of time travel. These 18 instances certainly won’t be the last time we get a glimpse of what time travel might actually be like, and these pictures definitely give us hope that we might someday jump into the future or past of our lives.

YouTube Video of 10 Possible EVIDENCE OF TIME TRAVEL Throughout History