Even as Indian Vice President Hamid Ansari is in China to mark 60 years of the Panchsheel agreement, the Chinese government has stirred a new controversy. China has released a new map showing Arunachal Pradesh as a part of it.

This is the latest in a routine dispute between the two nations which have differing perceptions of the 3,488-km long Line of Actual Control. China also continues to give residents from Arunachal stapled visas.

The Chinese government, in a new vertical map of the country, has shown Arunachal Pradesh as part of its territory, triggering controversy even as India called it its "alienable part".

The new map of China, unveiled some days back, shows the Northeastern state as part of Tibet. China has always staked claim on parts of Arunachal.

Reacting to the new map, the Indian government has said Arunachal Pradesh was an "inalienable part of India".

"Arunachal Pradesh is inalienable part of India, which has been conveyed to Chinese authorities on several occasions including highest level," the Ministry of External Affairs said.

The Arunachal Pradesh government condemned the claim of China over the state, and said the Centre should look for a solution to this territorial dispute.

"We objected and condemn this claim of Arunachal. We want the government of India to talk to China and look for solution for this," Chief Minister Nabam Tuki was quoted as telling ANI.

The controversy comes as India's Vice-President Hamid Ansari is on a trip to China. He was in Beijing on Saturday and called for India and China to narrow down differences and build on convergences by exploiting the potential of Panchsheel, the five principles of peaceful coexistence propounded by the two countries along with Myanmar in 1954.

The map also gives greater play to its claims on the South China Sea making the disputed waters and its numerous islets and reefs more clearly seem like national territory, Reuters added.

Previous maps published by the government already include China's claims to most of the South China Sea, but in a little box normally in a bottom corner to enable the rest of the country to fit on the map.

The new, longer map dispenses with the box, and shows continental China along with its self-declared sea boundary in the South China Sea – stretching right down to the coasts of Malaysia, Vietnam and the Philippines – on one complete map.

"The islands of the South China Sea on the traditional map of China are shown in a cut-away box, and readers cannot fully, directly know the full map of China," the ruling Communist Party's official People's Daily said on its website.

Old maps make the South China Sea's islands appear more like an appendage rather than an integral part of the country, which the new map makes "obvious with a single glance", the report added.

"This vertical map of China has important meaning for promoting citizens' better understanding of … maintaining (our) maritime rights and territorial integrity," an unnamed official with the map's publishers told the newspaper.

China's foreign ministry said people should not read too much into the issuing of the new map.

"The goal is to serve the Chinese public. As for the intentions, I think there is no need to make too much of any association here," ministry spokeswoman Hua Chunying told a daily news briefing.

"China's position on the South China Sea issue is consistent and extremely clear. Our stance has not changed."

Beijing claims about 90 per cent of the South China Sea, but parts of the potentially energy-rich waters are also subject to claims by the Philippines, Vietnam, Malaysia, Brunei and Taiwan.

Tensions have risen sharply in the region in recent months, especially between China and both Vietnam and the Philippines.

China's positioning of an oil rig in waters claimed by both Beijing and Hanoi last month has led to rammings at sea between ships from both countries and anti-Chinese violence in Vietnam.

China, it said, claimed most of the state was part of southern Tibet.

The new map has been made by Hunan Map Press and Hubei Bureau of Surveying, Mapping and Geo-Information, said a Wall Street Journal report citing Chinese media.

It is the first official map of China to be stretched vertically to include all of islands it claims in the South China Sea, said China's Xinhua news agency, according to WSJ.

Not just India, China is currently also locked in maritime disputes with Japan in the East China Sea and with Vietnam, the Philippines, Malaysia and Brunei in the South China Sea. According to Chinese officials, China has settled border disputes with 12 of its 14 neighbours except India and Bhutan. 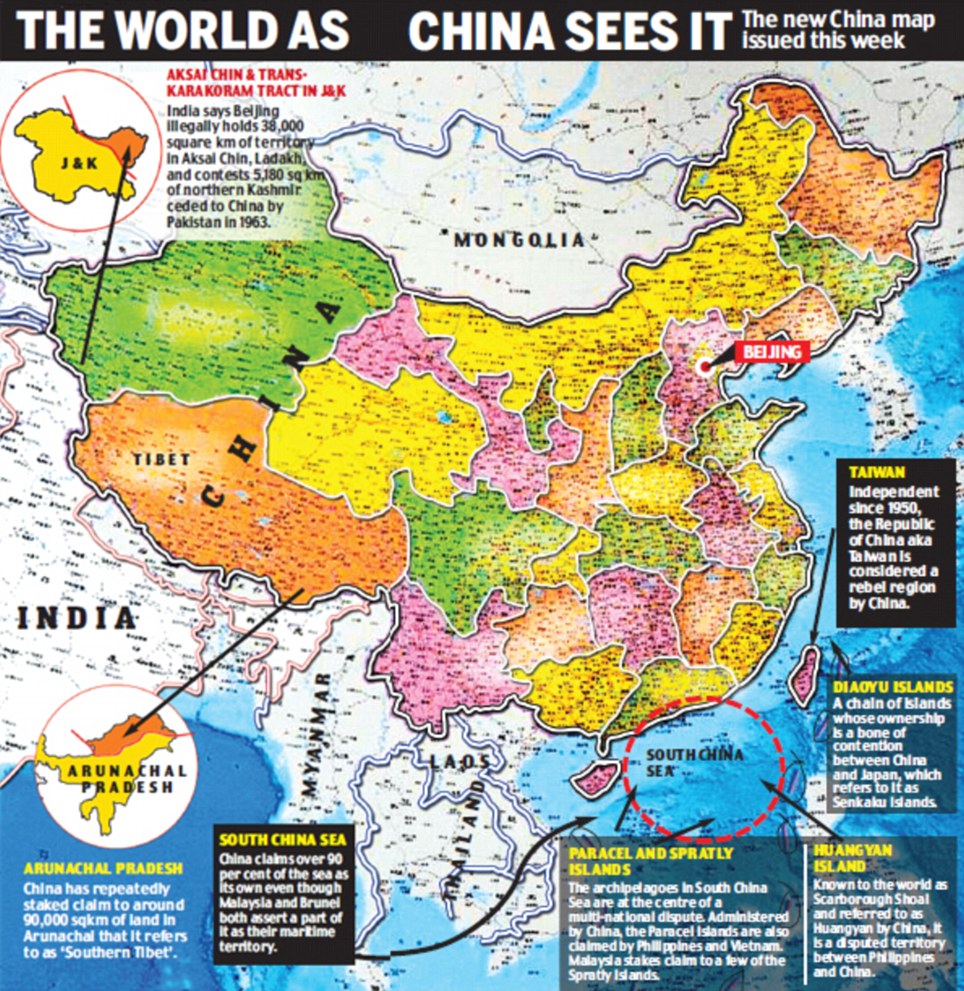 With input from Reuters

14 Reasons Being A Short Girl is Actually...

Everybody knows short is the new tall
Read more

The “Violence Against Women” Ad That Will Haunt...

Help us put an end to one of the most painful aspects of violence against women: silence.   The Instituto Maria da Penha is a non-profit...
Read more

Inspiring Story Of A Double Amputee Warrior Who...

Temur Dadiani is a double-amputee soldier injured in Afghanistan. He lost both his legs to the landmine but didn’t give up and made unbelievable...
Read more

Voice calling on WhatsApp is reportedly out for testing, but in a limited release WhatsApp has finally begun the testing phase of its much anticipated...
Read more

Delhi Girls On Marrying An Entrepreneur? Yes but...

Indiepreneur did a social experiment in Delhi to know more about how the general junta perceives of an ‘Entrepreneur’. They asked, "Would you mind...
Read more
Load more