How the Student Debt Alters Grads’ Choices Throughout Their Lives

America has gone through a rapid social experiment over the last 20 years. We have created a system, in large part through public disinvestment, where our young people take on large amounts of student debt in order to achieve a college degree. The sea change has been so quick it’s been difficult to gather even basic, solid numbers on it, making the consequences of such massive student debt subject to intense debate.

A new report from Beth Akers and Matthew M. Chingos of the Brookings Institution has further fueled that debate, arguing that the conventional story of escalating debt burdens due to student loans are overstated. Even though the number of young households with debt has increased from 14% to 36% between 1989 and 2010, the percentage of monthly income those people put toward their student debt payments is largely the same. Even though student loan debts are going up, they’ve been accompanied by rising incomes, largely balancing out the burden. The focus shouldn’t be on student loans broadly, and instead on more targeted solutions like focusing on those who drop out of college but still have debt.

But this study, like many arguments along these lines, suffers from a major problem: It focuses on a month-to-month comparison. When we look at the effects of a major economic change — whether it’s government debt, taxes, or replacing a system of publicly funded free colleges with a system of debt for a diploma — we can’t just look at what immediately happens. We need to also consider how people behave in the long run. And when we look at student loans from the point of view of a lifetime, the results are more worrisome. 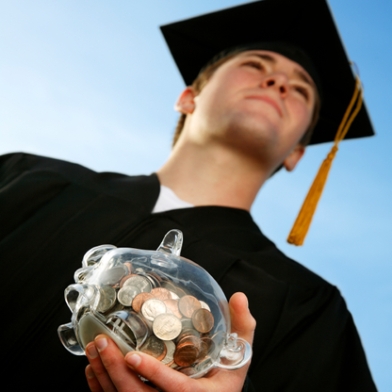 How could this matter? An infamous study on student debt by Jesse Rothstein of the University of California, Berkeley, and Cecilia Elena Rouse of Princeton looked at the results of a highly selective university replacing loans with grants. It concluded “that debt causes graduates to choose substantially higher-salary jobs and reduces the probability that students choose low-paid ‘public interest’ jobs.'”

Let’s imagine two scenarios. In the first you have high student loans, so you work for a corporation in the private sector for high wages. And in the second you have virtually no student loans, and you work for less wages in a job focused on the public interest, say as an educator or at a nonprofit. In both cases your student loan payment would be the same as a percentage of your income. The Brookings result would hold. However your lifetime choices will have radically changed as a result.

We see this with other lifetime measures, such as how entrepreneurial people are. A recent study by Brent W. Ambrose of Pennsylvania State University, and Larry Cordell and Shuwei Ma of the Federal Reserve Bank of Philadelphia, found “a significant and economically meaningful negative correlation between changes in student loan debt and net business formation for the smallest group of small businesses.” This makes sense. You can keep your high student loan burdens low if you stay with an established employer. But if you strike out on your own, you’ll have less and more volatile income when you start. This is harder to manage with student loans, which also impacts your credit rating. Again, we can see the short-term student loan burdens staying the same, even though lifetime choices are much more limited as a result.

The lifetime framework also puts front and center something the Brookings study largely hand-waves: The rapid increase in how long people are paying off their student debt. Though the percentage of income that student-loan debtors pay stays the same, the length they are paying those loans is up 80%. What was once an average length of 7.4 years in repayment in 1992 is now 13.4 years. All things equal, a large increase in the length you will be paying student loans means you will dedicate a larger portion of your lifetime income to student loans. This burden goes missing by narrowly looking at a month-to-month basis.

This has major consequences for people’s ability to build wealth. Indeed, much of the current energy in analyzing student loan burdens are looking at this longer dynamic, and how it interplays with the ability for people to amass savings. As Richard Fry of Pew found, using the same data set as Brookings, “households headed by a young, college-educated adult without any student debt obligations have about seven times the typical net worth ($64,700) of households headed by a young, college-educated adult with student debt ($8,700).” Fry also finds that those who took out loans are less satisfied with their financial situation compared to people without loans. Similar results have been investigated and found by the Federal Reserve Bank of St. Louis.

This, in turn, has major consequences for how young people will ultimately transition into adulthood. According to Dora Gicheva of the University of North Carolina at Greensboro, student debt decreases the long-term probability of marriage by a significant amount. In a result that should make social conservatives gasp, Gicheva found that an additional $10,000 in loans decreases the probability of marriage by at least 7 percentage points. Meanwhile, the Federal Reserve Bank of New York found that young student debtors are retreating from those traditional markers of adulthood, homeownership and owning a car. These effects reflect the long-term consequences of student debt on a young person’s economic security just as much, if not more, than their monthly bill.

This system of student debt has happened so fast that proper analysis is hard to do. But what’s most interesting is research showing how student debt threatens fundamentally American ways of life. Student debt chips away at the ability to be a risk-taking entrepreneur, a homesteader who has amassed enough wealth to be self-sufficient, or someone who has dedicated their craft to working in our rich civil society. These are three very real versions of the American Dream, and contrary to what studies like Brookings’s might show over the short term, they are all being weakened by the way we saddle young people with student debt burdens.

This article originally published at The New Republic.

5 Tips to Work Smarter, Not Harder

The more efficiently you run your day-to-day business affairs, the more time you have for other important tasks. Chris Ridd, managing director of small...
Read more

The one person whom we all love and to whom we are always innocent is our MOM. They are the only person in this...
Read more

Man and Family of Gorillas: An amazing Encounter

This photographer traveled to Uganda in hopes of capturing Mountain Gorillas in their natural habitat. Little did he know that this trip would be...
Read more

What India Wants from Mr. Narendra Modi?- A...

‘Modi wave’ has truly diverted the political scenario of the country in the 2014 elections. A major role is, however, played by the youth...
Read more
Load more