Serbs vs Albanians: Why Do They Hate Each Other? | Albania–Serbia Relation

The period in the 20th century when India attained its freedom is perhaps one of the most unforgettable ones in world history. The 1947 partition of India and Pakistan led to the largest mass migration in human history of some 10-15 million people with Muslims migrating from present day India to present day Pakistan and Bangladesh (which was then known as East Pakistan) and Hindus migrating to present day India although many decided to stay in their ancestral lands.

Over one million civilians died in the accompanying riots and local-level fighting, particularly in the western region of Punjab which was cut in two by the border. The riots were a result of a lack of military and political control on the part of the British who had colonised India.

Here are 20 rare images from that horrific period in 1947, the eventful year when India and Pakistan were separated.

1. Thousands of people migrated from India to the new formed nation along with their families and belongings. The sight was just horrific for many to even imagine.

2. The father of the nation Mahatma Gandhi meets Muslim refugees who have gathered at a camp in New Delhi. These individuals belonging to the minority group were proceeding to the newly formed nation, Pakistan. 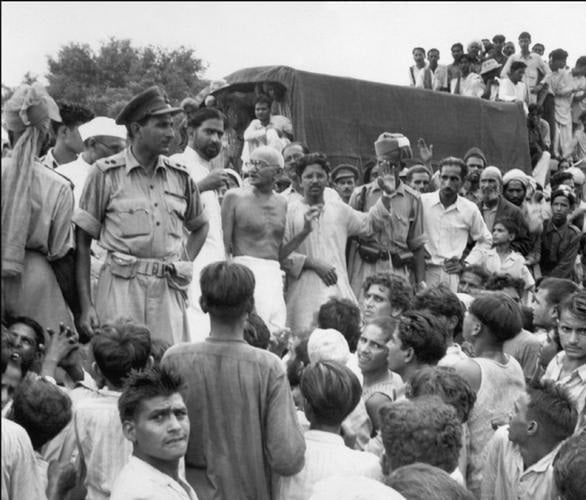 3. Ground being excavated to accommodate the dead bodies of those who lost their lives in the partition battle. 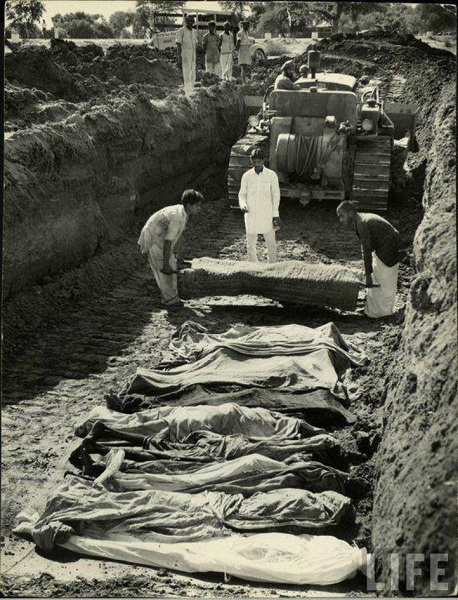 4. A Muslim couple, along with their grandchildren, lies on the roadside after being exhausted by the travel. Hundreds walked past them, but none of the refugees attended to the plight of this family. 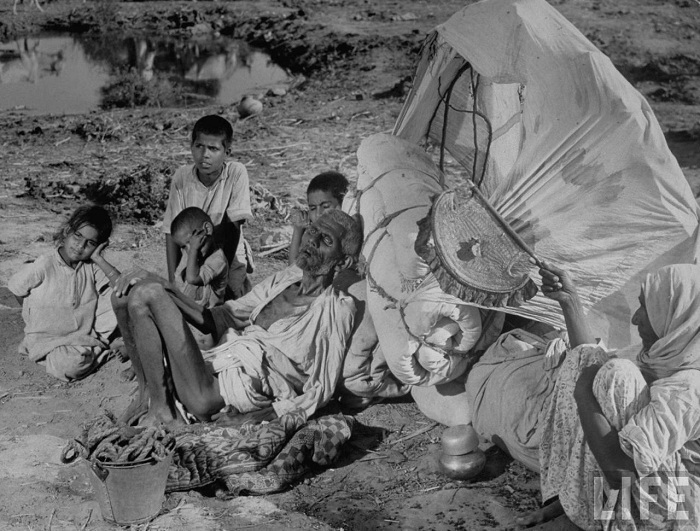 5. A young boy sits on what looks like a ruined wall of a fort. 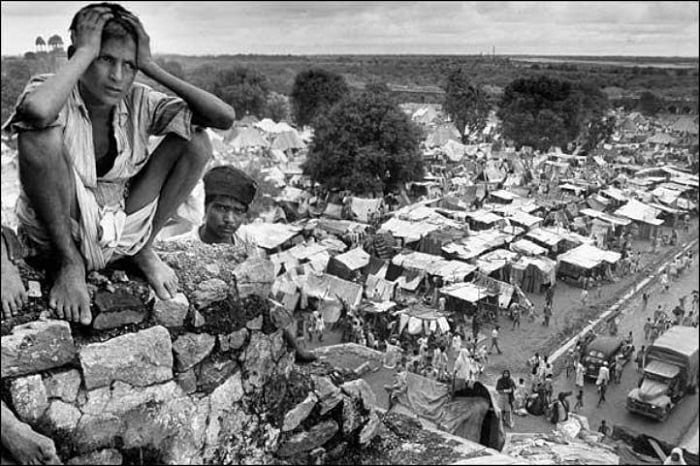 6. Those who were tired of walking had to be carried on the shoulders by the stronger members of the family. 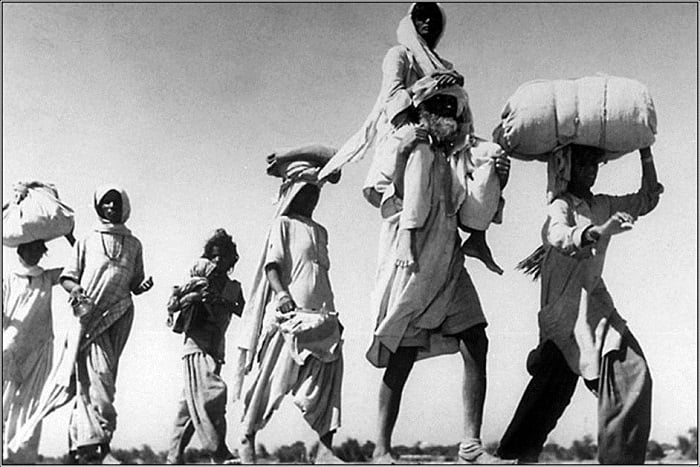 7. The partition also paved way for riots, which killed hundreds of people belonging to the Hindu and Muslim religions. Scores of dead bodies were thrown in ponds as well as streams in the border regions of India and Pakistan. 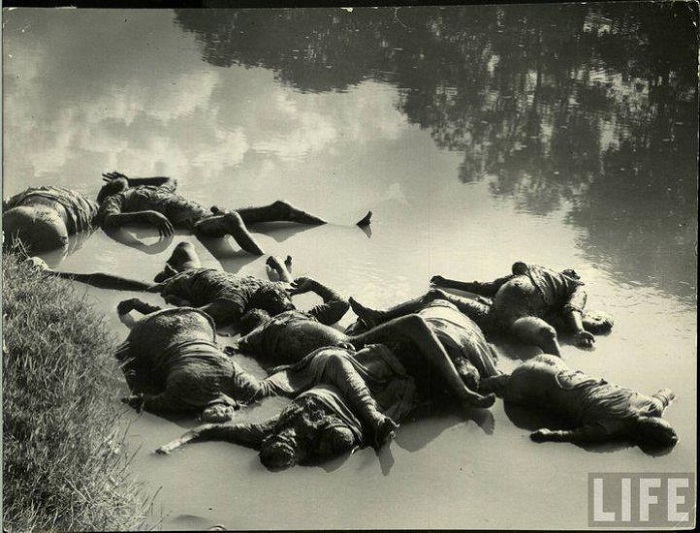 8. Many miscreants used this turbulent political situation to the best of their advantage and created chaos across the cities, which included setting vehicles ablaze and ransacking shops. 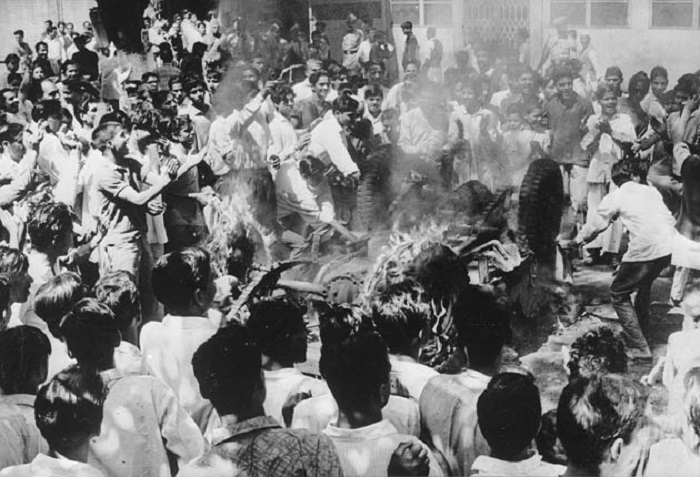 9. Another important event of the partition was the riot which occurred at Calcutta, also known as the ‘Calcutta Mass Killings’. Many were killed and vultures fed themselves on the corpses of the deceased. 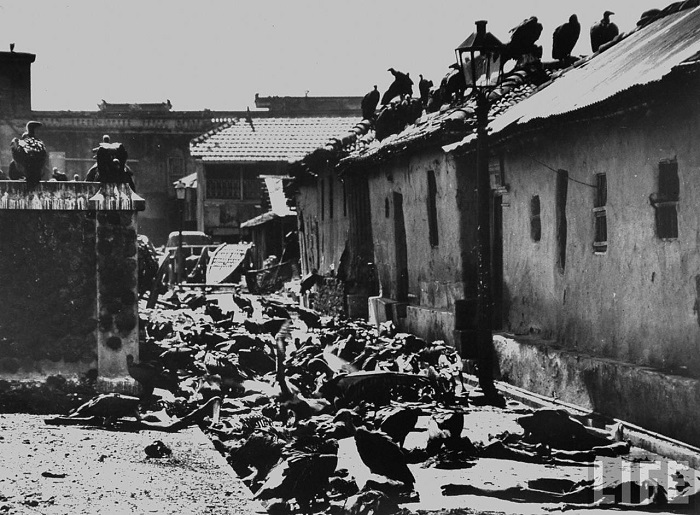 10. Thousands boarded the ‘North West Railways’ express trains to travel towards Pakistan. While travelling, many of them were attacked at stations such as Attari, near Punjab, located by the border region between the two nations and butchered to death. 11. People even accommodated themselves on train tops to reach their destinations. 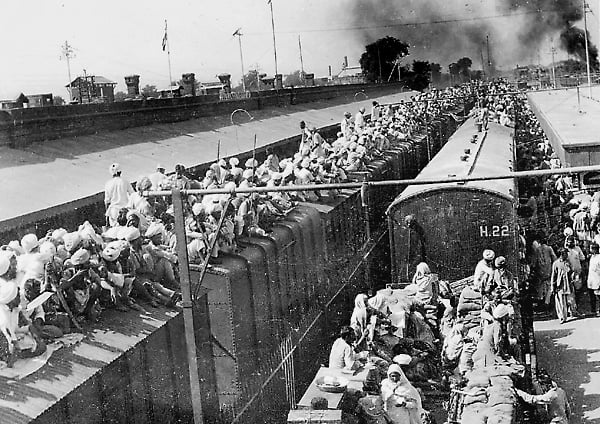 12. Peasants using bullock carts as transport to ferry themselves across the border. 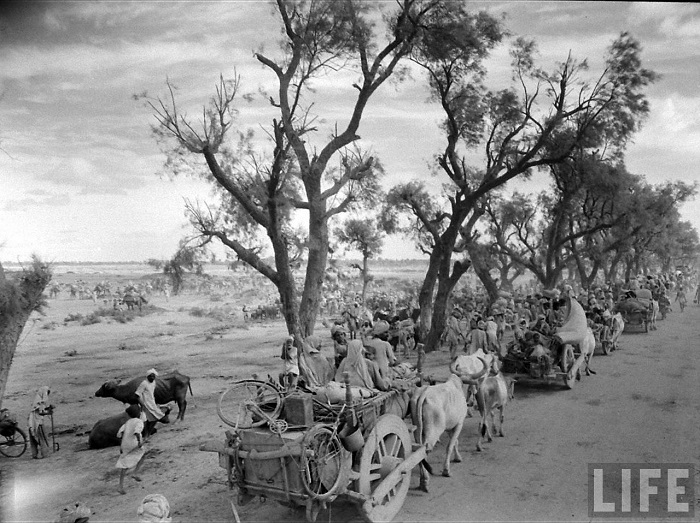 13. As a result of the massacre in Calcutta, many were butchered and their arms and legs lied buried under pieces of wood. 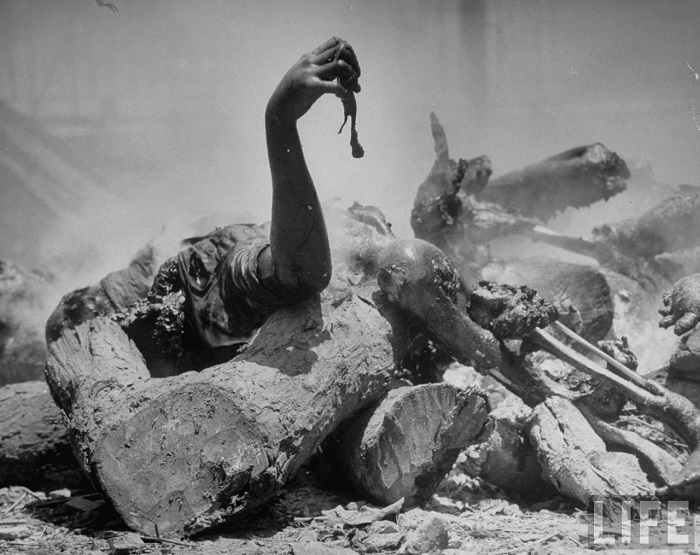 14. This couple lost their little bundle of joy as a result of the infamous partition of 1947. Many people, especially those living in the border regions of India and Pakistan had to pay a heavy price. 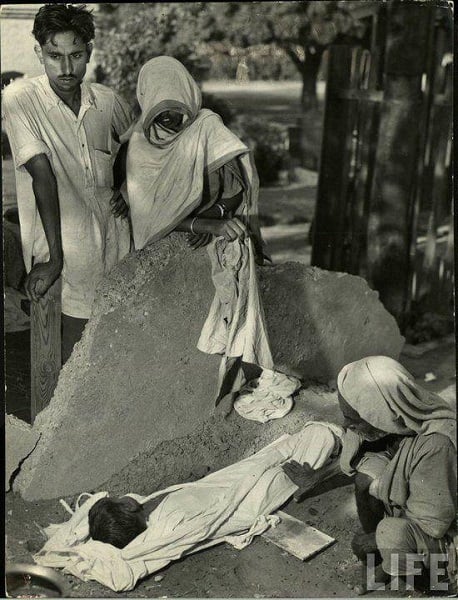 15. A scene from a day in September 1947, when millions of people belonging to the Muslim community had gathered at this place. All of them intended to travel towards the Dot Purana Qila, an ancient fort in Pakistan which had become a refugee camp of sorts. 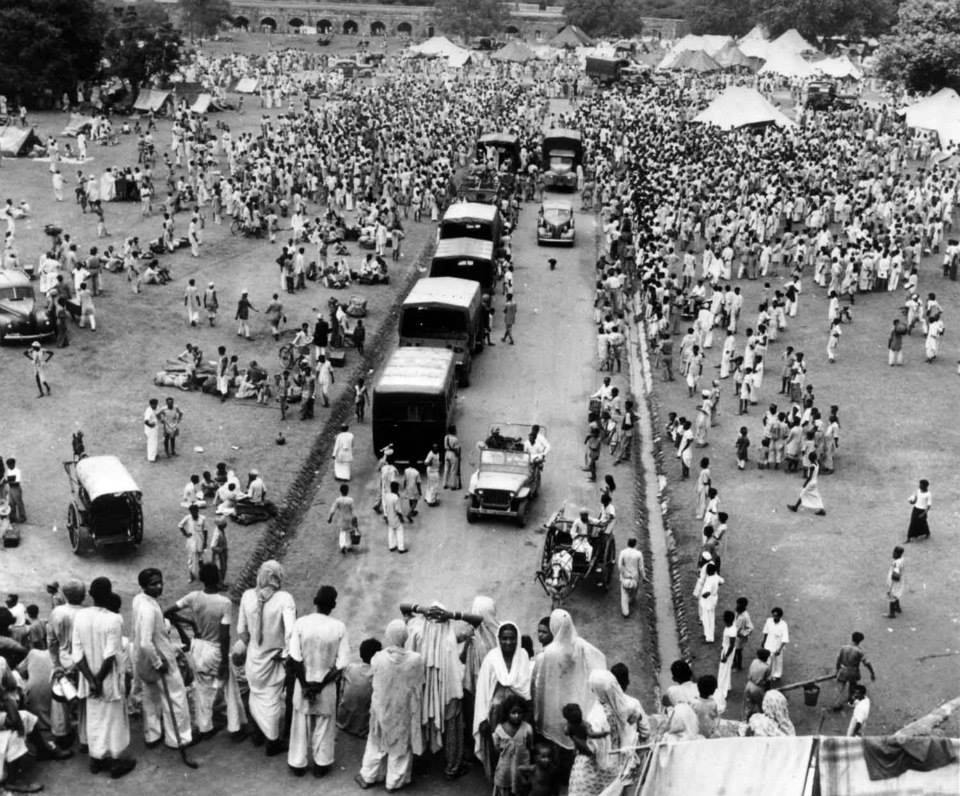 16. This is how families managed to survive the wrath of those difficult days. 17. It’s not confirmed whether he was run over by a train or killed by the mobs. However, this was one deeply disturbing moment from the bygone era. 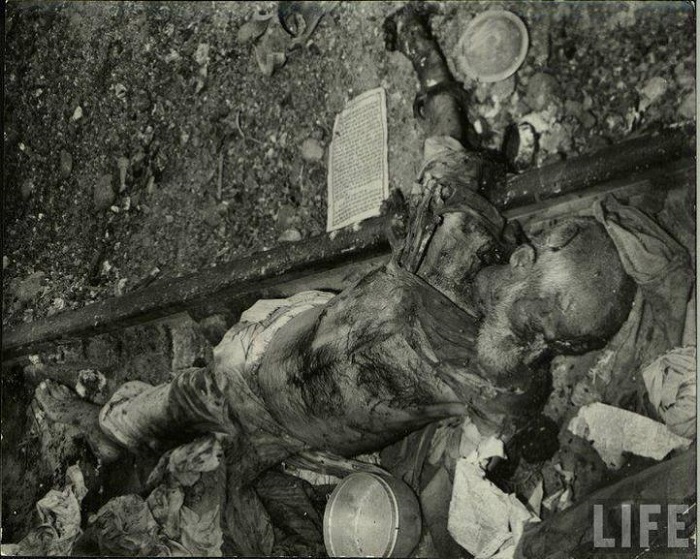 18. A bottle of re-hydration solution helps an ill refugee overcome her poor state of health. 19. Many refugees belonging to the Hindu community arrive at a dockyard in a bid to board a ship. All these individuals were headed to Bombay to start life afresh. 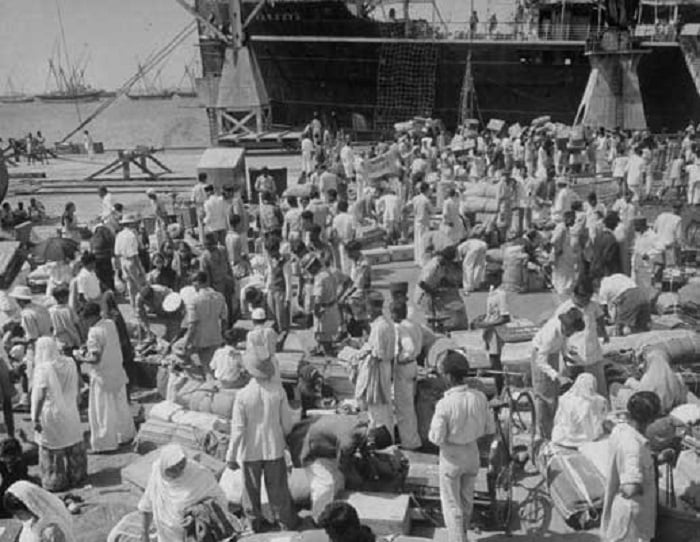 20. An infant who became a victim of the horrendous set of events in 1947. 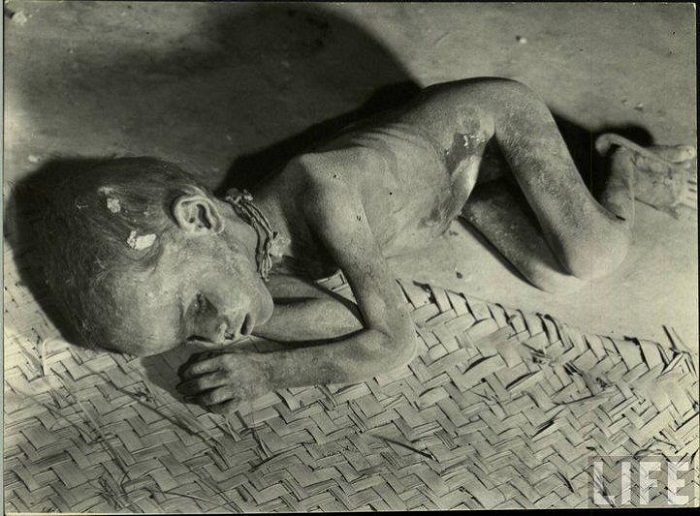 Rarely known facts about the partition of India after independence: