Deep sea creature refers to organisms that live below the photic zone of the ocean.

These creatures must survive in extremely harsh conditions, such as hundreds of bars of pressure, small amounts of oxygen, very little food, no sunlight, and constant, extreme cold. Most creatures have to depend on food floating down from above.

The sea is full of many mysteries, and most of the creatures that live in there are not yet known to the human world.

From the giant jelly fish to the 100 foot alien like sea creature. These strange sea animals will interest and inspire you. We bring you Top 10 unexplained and mysterious deep sea creatures that are caught on camera. 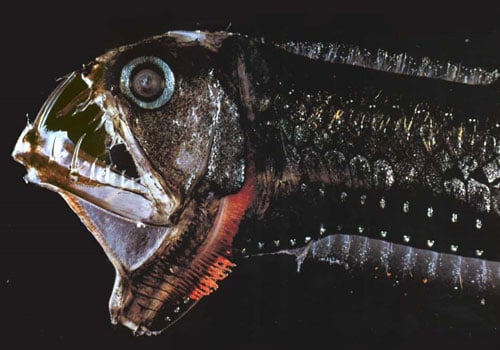 The Viperfish (Mesopelagic – found at 80-1600 meters – about a mile down) is one of the most wicked looking sea monsters. Some of them are black as night all over with light organs (called photophores) in strategic places on their bodies, including one on a long dorsal fin that serves as a lure for the fish it preys upon. Some viperfish (and many other deep ocean fish species) don’t have any pigment (color) at all – they’re transparent. 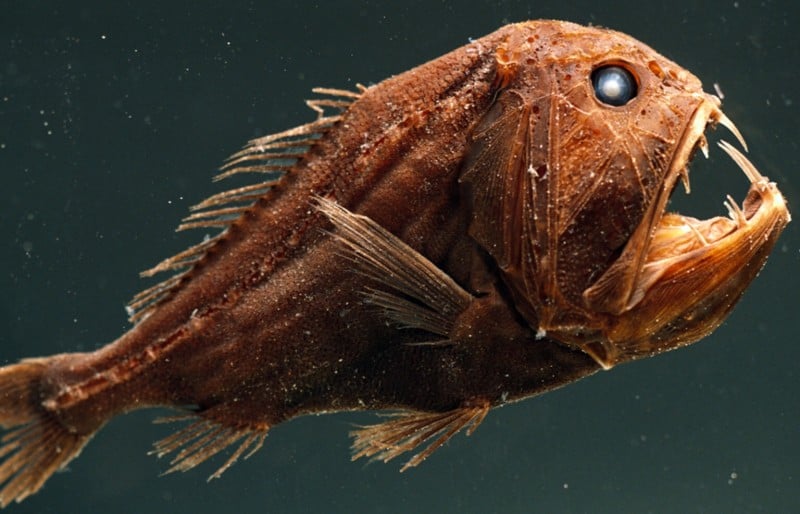 The fangtooth, also known as Anoplogaster cornuta, is another menacing looking creature that inhabits the deep waters of the ocean. Although it may look like a monster, it only grows to a size of about six inches in length. It has a short body and a large head. The fangtooth gets its name from the long, sharp, fang-like teeth that line its enormous, over-sized mouth. Its gruesome appearance has earned it the name, “ogrefish”. The fangtooth is an extreme deep-water species that lives at depths of about 16,000 feet. The fangtooth is found throughout the world in temperate and tropical ocean regions including the waters off the coast of Australia. 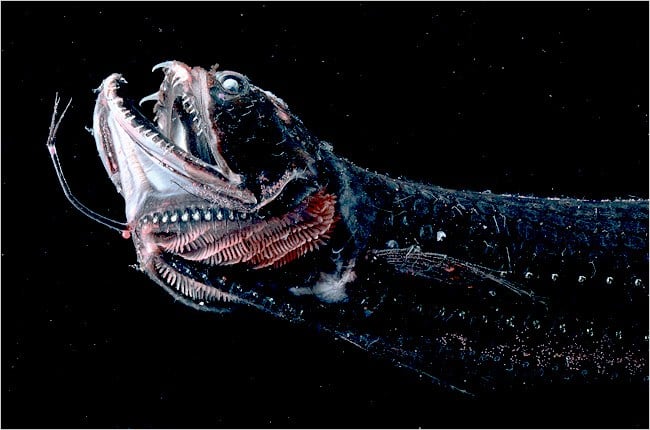 The Deep Sea Dragonfish, or Grammatostomias flagellibarba, is a ferocious predator in spite of its small size. It is one of many species known to inhabit the deep oceans of the world. This fish grows to about six inches in length. It has a large head and mouth equipped with many sharp, fang-like teeth. The dragonfish has a long barbel attached to its chin. This barbel is tipped with a light-producing organ known as a photophore. The dragonfish uses this organ like a fishing lure, flashing it on and off and waving it back and forth. Once an unsuspecting fish gets too close, it is snapped up in the dragonfish’s powerful jaws. The Dragonfish lives in deep ocean waters at depths of up to 5000 feet (1,500 meters). They are found in most tropical regions around the world. 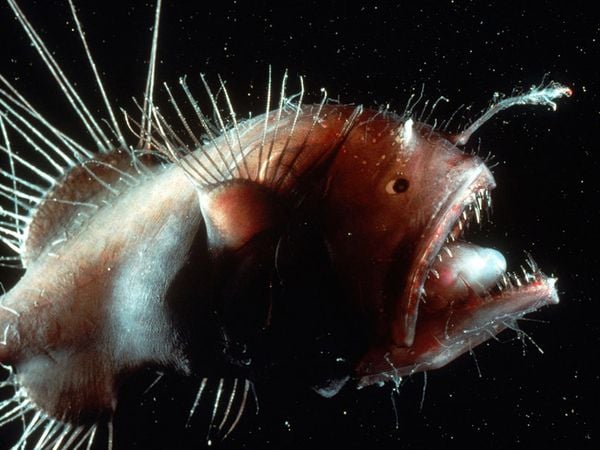 The deep sea angler, known also as Melanocetus johnsoni, is a grotesque-looking fish that lives in the extreme depths of the ocean. Its round body resembles a basketball, and indeed, it looks like it could easily swallow one. It has a large mouth likes with sharp, fang-like teeth. Its appearance has earned it a second name of “common black devil”. Despite its ferocious appearance, the angler only reaches a maximum length of about five inches. A strange fact about the deep sea angler is the fact that the male is smaller and different in appearance from the female, which is pictures above. The deep sea angler is found throughout the world at depths of over 3000 feet. 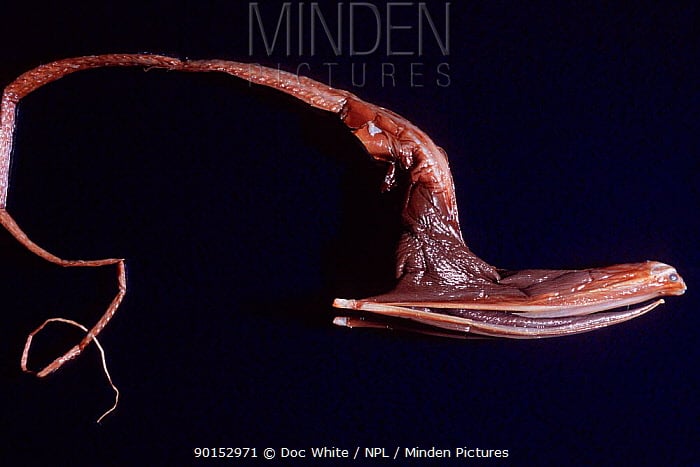 The gulper eel, known scientifically as Eurypharynx pelecanoides, is perhaps one of the most bizarre looking creatures in the deep ocean. Its most notable attribute is the large mouth. The eel’s mouth is loosely hinged, and can be opened wide enough to swallow an animal much larger than itself. The hapless fish is then deposited into a pouch-like lower jaw, which resembles that of a pelican. The gulper eel grows to a length of about two to six feet and is found in all of the world’s oceans at depths ranging from 3000 to 6000 feet. 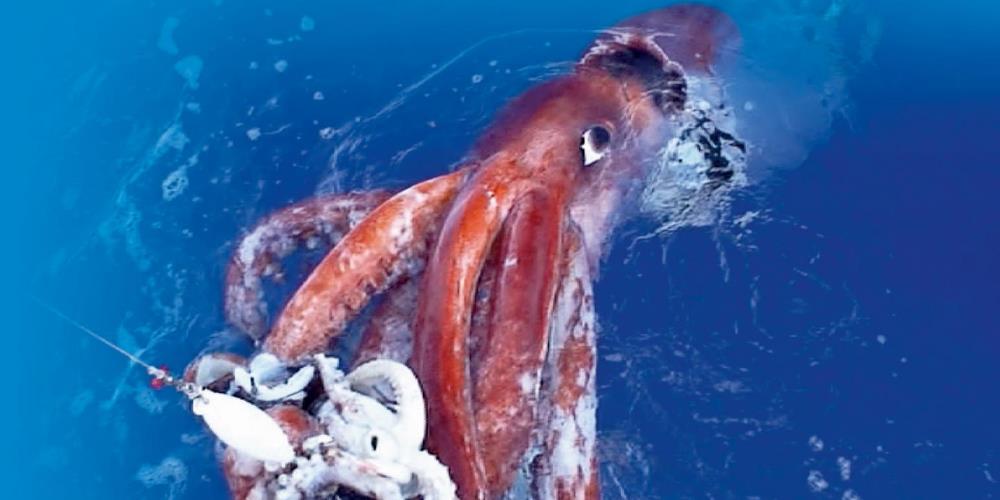 The elusive giant squid, known to science as Architeuthis dux, is one of the world’s largest animals, reaching a length of up to 60 feet. It is the largest known Invertebrates in the world. The giant squid is a mollusk and is member of the cephalopod class, which includes the octopus and other squids. Very little is known about these mysterious animals because none have been seen alive in the wild. Most of what we know about them comes from the bodies of dead squid that have washed ashore or been pulled up in fishermen’s nets. 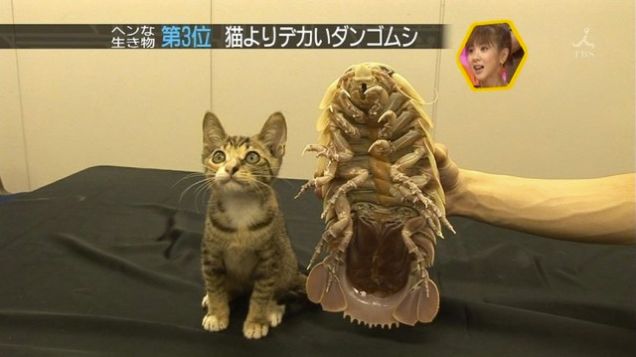 The giant isopod, known scientifically as Bathynomus giganteus, is the largest known member of the isopod family. It is very closely related to the small pillbugs that you can find in the garden. It is a carnivorous crustacean that spends its time scavenging the deep ocean floor. Food is extremely scarce at these great depths, so the isopod has adapted to eat what ever happens to fall to the ocean floor from above. Giant isopods are all over the world at depths of over 2000 feet. 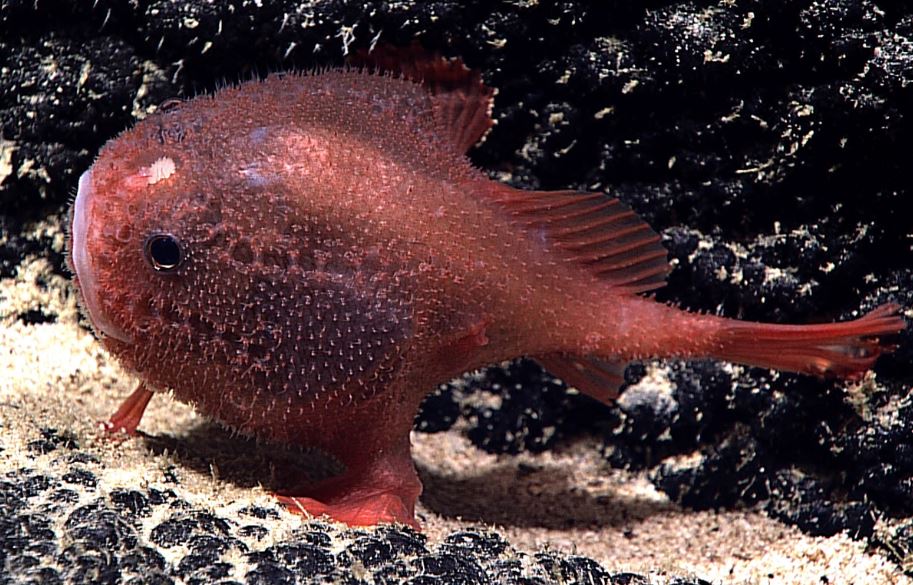 The coffinfish (B.melanostomus) has a flabby body and long tail that are both covered with small spines. It has a black mouth lining and an illicium (glossary) on the snout that can be lowered into a groove. This species grows to at least 10cm in length. B.melanostomus has been trawled in the Central to Eastern Indian Ocean at depths ranging from 1320m to 1760m. The name melanostomus comes from the Greek melanos meaning black and stoma meaning mouth. 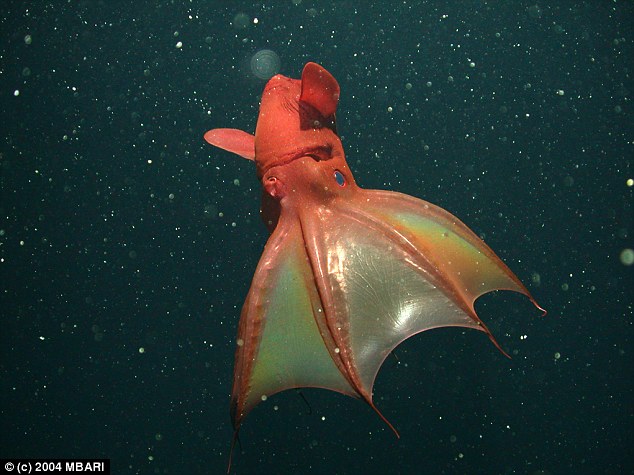 The vampire squid, known to scientists as Vampyroteuthis infernalis, looks more like something that swam out of a late-night science fiction movie. The squid has large fins at the to of its body that resemble large ears. It is very gelatinous in form, resembling a jellyfish more than the common squid. The vampire squid has the largest eyes of any animal. It is a small animal, growing to a length of about six inches, bit it has globular eyeballs as large as the eyes of a large dog. The vampire squid’s body is covered with light-producing organs called photophores. These squid live as deep as 3000 feet. 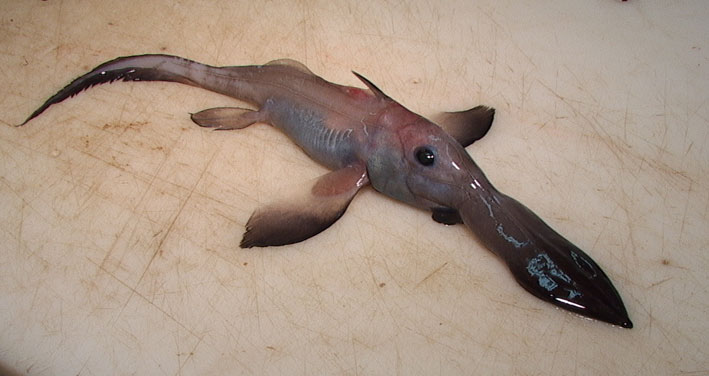 Biologists have gone to great lengths to describe the long-nosed chimaera, Harriotta raleighana, whose kind can reach five feet in length. Its stiletto-like nose reminded one of “the nose contour of a supersonic jet aircraft.” Others have dubbed it “rattail,” for obvious reasons. In South Africa, it is known as the “ghost shark,” though it is only distantly related to sharks. A touch of the venomous spine on the first dorsal fin can kill a person, though such a fate is unlikely given the 8,000-foot depths at which this creature lives.