What is an Earthquake, How it is measured, Its Causes, Types, Earthquake Safety Tips, Countries Prone to earthquake most

When the Earth’s plates move against each other, it causes stress that is put on the lithosphere layer. When this stress is increases, the lithosphere breaks or shifts. And this shift in the rock masses, usually near tectonic plates, causes Earthquake. Lets go in detail discussion, about what is earthquake, its causes, its types, most prone countries and how can we save ourselves if encountered with earthquake.

What is an Earthquake?

An earthquake is caused by shock waves produced when deep within the Earth’s surface there is a shift in the rock masses, usually near tectonic plates. The results of an earthquake can be as simple as tremors, and as devastating as tsunamis and mass destruction. Earthquakes are one of the many natural events that can happen at any time. Sometimes scientists can predict an earthquake, but it’s not always the case, or is it always accurate.

Earthquakes may be assessed by observing the movements of the Earth using a seismometers. Earthquakes usually last only for a few seconds, but aftershocks can last much longer depending on the magnitude of the earthquake. In fact, aftershocks can take place for days or even weeks after the initial earthquake.

The crust of the earth is constantly moving. This movement can create stress that can change the shape of a body of rock. Sometimes stress builds up between two bodies of rock and they can slide past, over, or under one another fairly quickly. This sudden release of stress can cause earthquakes.

How Does Earthquake Occur -3D explanation:

Type Of Earthquakes happen all around the world:

There are four different types of earthquakes: Tectonic, volcanic, collapse and explosion. The type of earthquake depends on the region where it occurs and the geological make-up of that region.

1. A tectonic earthquake is one that occurs when the earth’s crust breaks due to geological forces on rocks and adjoining plates that cause physical and chemical changes.

2. A volcanic earthquake is any earthquake that results from tectonic forces which occur in conjunction with volcanic activity.

3. A collapse earthquake are small earthquakes in underground caverns and mines that are caused by seismic waves produced from the explosion of rock on the surface.

4. An explosion earthquake is an earthquake that is the result of the detonation of a nuclear and/or chemical device.

Earthquakes have different movements and occur in three different ways:

The Strike-Slip, The Normal , The Thrust.

When earthquakes are strong, they may create aftershocks that can last a while and cause more damage than the initial earthquake, depending on the magnitude of the earthquake.

Earthquakes are always happening somewhere in the world. Magnitude 2 and smaller earthquakes occur several hundred times a day world wide. Major earthquakes, greater than magnitude 7, happen more than once per month. “Great earthquakes”, magnitude 8 and higher, occur about once a year. 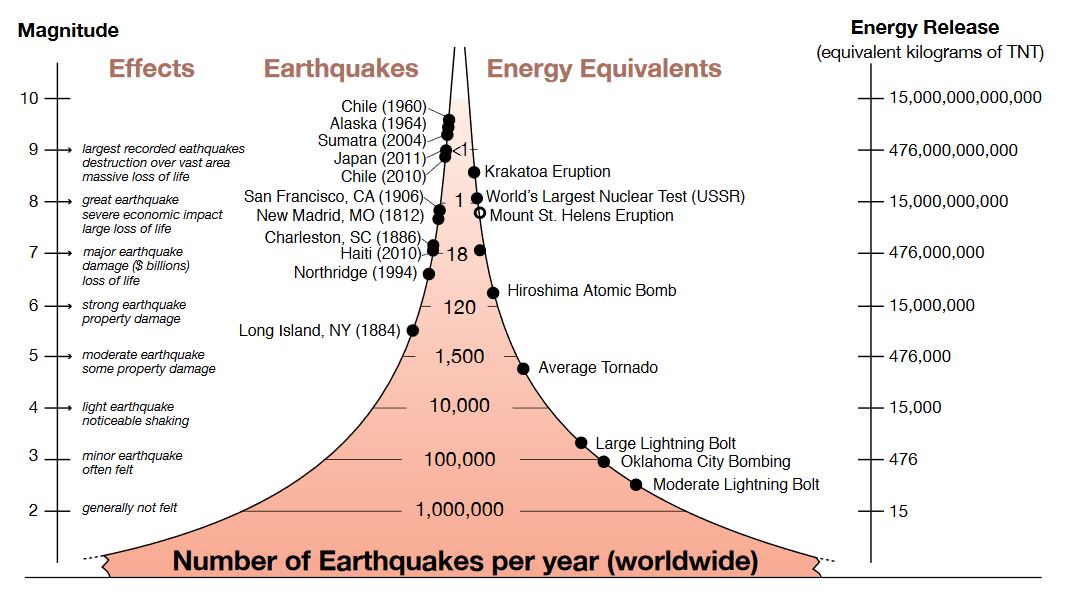 Here we have listed only top 10 countries prone to earthquake.

How Earthquake are measured, How the Magnitude and Intensity are determined.

Earthquakes are recorded by a seismographic network. Each seismic station in the network measures the movement of the ground at the site. The slip of one block of rock over another in an earthquake releases energy that makes the ground vibrate. That vibration pushes the adjoining piece of ground and causes it to vibrate, and thus the energy travels out from the earthquake in a wave.

There are many different ways to measure different aspects of an earthquake.

In short Magnitude refers to the amount of energy releases by an earthquake; intensity refers to how much damage was done.

The following table gives intensities that are typically observed at locations near the epicenter of earthquakes of different magnitudes. 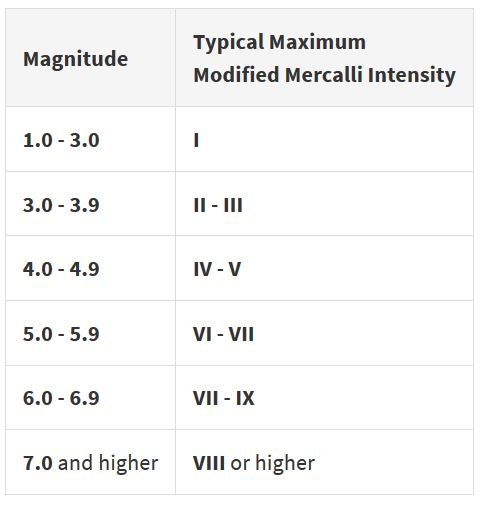 I. Not felt except by a very few under especially favorable conditions.

II. Felt only by a few persons at rest, especially on upper floors of buildings.

III. Felt quite noticeably by persons indoors, especially on upper floors of buildings. Many people do not recognize it as an earthquake. Standing motor cars may rock slightly. Vibrations similar to the passing of a truck. Duration estimated.

VI. Felt by all, many frightened. Some heavy furniture moved; a few instances of fallen plaster. Damage slight.

XII. Damage total. Lines of sight and level are distorted. Objects thrown into the air.

Magnitude 2.5 to 5.4. This is mostly felt, but usually results in minor damages. It commonly occurs about 30,000 times per year.

Magnitude 5.5 to 6.0. This magnitude causes slight damage to infrastructures. It also causes damage to highways and roads. In a year, it is not unusual for the Earth to experience these 500 times or more.

Magnitude 6.1 to 6.9. This causes destruction in populated areas and often ends up with several casualties. This magnitude is felt an estimated number of 100 times each year.

Magnitude 7.0 to 7.9. This is a major earthquake that causes series damage to the affected area. It may cause the destruction of buildings and homes, wreak havoc on roads, highways and bridges, and may cause a great number of casualties. This kind of earthquake occurs approximately 20 times per year.

Magnitude 8.0 or more.
This is a huge earthquake that often causes massive destruction. It can completely destroy the community or the place it’s centered around. Large numbers of casualties have always being recorded when this kind of earthquake strikes. 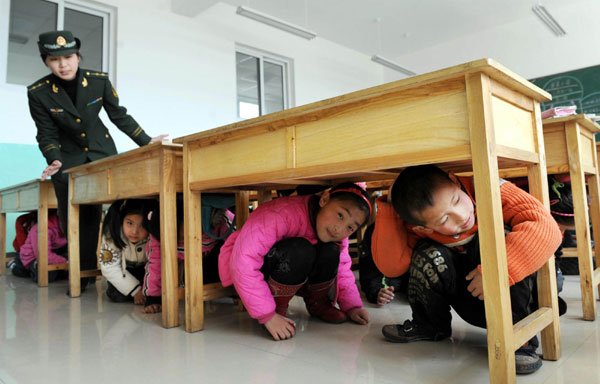 1. Be prepared to act. Know how to act so your response is automatic.

2. Identify safe places in your work area to Drop, Cover and Hold On.

3. Know at least two ways to exit the building safely after an earthquake.

5. Coordinate supplies with your work group or department.

6. Plan as if food and water may not be available for about 24 hours and other supplies for up to 3 days.

7. Arrange your work area for safety.

10. Use normal work order process to get furniture anchored.

11. Remain calm as the quake occurs –others will respond to your actions. A cool head can prevent panic.

12. If you are indoors when the shaking occurs, stay there. Move away from windows and unsecured tall furniture.

13. Drop, cover and hold on under a desk, a table or along an interior wall. Protect your head, neck and face. Stay under cover until the shaking stops and debris settles.

14. If you are outdoors, move to an open area away from falling hazards such as trees, power lines, and buildings. Drop to the ground and cover your head and neck.

15. Remain calm and reassuring. Check yourself and other for injuries.

16. Do not move injured people unless they are in danger. Use your training to provide first aid, use fire extinguishers, and clean up spills. In laboratories, safely shut down processes when possible.

17. Expect aftershocks. After large earthquakes, tremors and aftershocks can continue for days.

18. Be ready to act without electricity or lights. Know how to move around your work area and how to exit in the dark.

19. Know how to access and use your emergency supplies. Be aware of objects that have shifted during the quake.

20. If you must leave a building, use extreme caution.

21. Continually assess your surroundings and be on the lookout for falling debris and other hazards.

22. Take your keys, personal items and emergency supplies with you if safe to do so.

23. Do not re-enter damaged buildings until an all-clear is given.

24. Use telephones only to report a life-threatening emergency. Cell and hard-line phone systems will be jammed.Text messages take less band width and may go through when voice call can’t be made.

Share this article with your friends and family living in earthquake prone area, your little effort can save someone.