5 Facts about Muslim Population In Europe | You Should Know

The Western world is in decline. Low birth rates, mass immigration and increase of muslims and mosques are signs of of a dark era. The rapid growth of the Muslim population in Europe has given way to Sharia Law, which portends toward the same results given the rise of the Muslim population in America. Recent killings in Paris as well as the arrival of hundreds of thousands of mostly Muslim refugees in Europe have drawn renewed attention to the continent’s Muslim population. In many European countries, including France, Belgium, Germany, the United Kingdom and the Netherlands, concerns about growing Muslim communities have led to calls for restrictions on immigration. But just how large is Europe’s Muslim population, and how fast is it growing?

What Muslims in the US and around the world believe, and other key data points 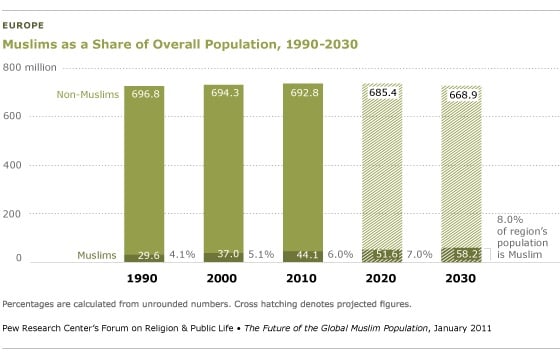 4. How Europe views MuslimsViews of Muslims vary widely among European countries. A Pew Research Center survey conducted this spring found that majorities in France, Britain and Germany had favorable views of Muslims. Opinion was on balance favorable in Spain while negative views prevailed in Italy and Poland. Views about Muslims are tied to ideology. While 36% of Germans on the political right give Muslims an unfavorable rating, just 15% on the left do so. The gap between left and right is also roughly 20 percentage points in France and Italy. And significant differences are found in the UK as well.

5. As of 2010, the European Union was home to about 13 million Muslim immigrants. The foreign-born Muslim population in Germany is primarily made up of Turkish immigrants, but also includes many born in Kosovo, Iraq, Bosnia-Herzegovina and Morocco. The roughly 3 million foreign-born Muslims in France are largely from France’s former colonies of Algeria, Morocco and Tunisia.

1. Also Watch YouTube Video “The European countries with the highest % of muslims”

2. When The Muslim Population Of Any Country Reaches 20% Freedom Disappears – Wake Up Europe!