How Budapest Became A “City of Smiles” From The “City of Suicides” in 1930’s?

An epidemic of suicide sweeps through Budapest, and the city tries to stop it in an odd way: by creating a “Smile Club”, where people are taught to smile again.

The initiative is covered in the 17 October 1937 issue of Sunday Times Perth:

Although a magnet for tourists from all over the world, Budapest has for several years been known to its own people as The City of Suicides.

Budapest suffered badly after the war and has received unpleasant publicity from the number of cases of self-destruction occurring every year within its boundaries. Some of them are alleged to have been inspired by the Budapest song, “Gloomy Sunday”, but, be that as it may, the suicide rate in Budapest is definitively very high.

The favorite method adopted by most Budapest melancholics is drowning, and patrol boats are stationed along the boundary near the bridges to rescue citizens who seek consolation in the dark waters of the Danube.

Now, however, a “Smile Club” has been inaugurated to counteract the suicide craze. It was originally began more as a joke by a Professor Jeno and a hypnotist named Binczo, but somehow it caught on. The organisers have now a regular school and guarantee to teach the Roosevelt smile, the Mona Lisa smile, the Clark Gable smile, the Dick Powell smile, the Loretta Young smile, and various other types, the rates varying according to the difficulties encountered.

Jeno says the methods employed at his school, aided by better business conditions in Budapest, are making smiling popular, and before long it is hoped that the name of Budapest will be change to the City of Smiles.” 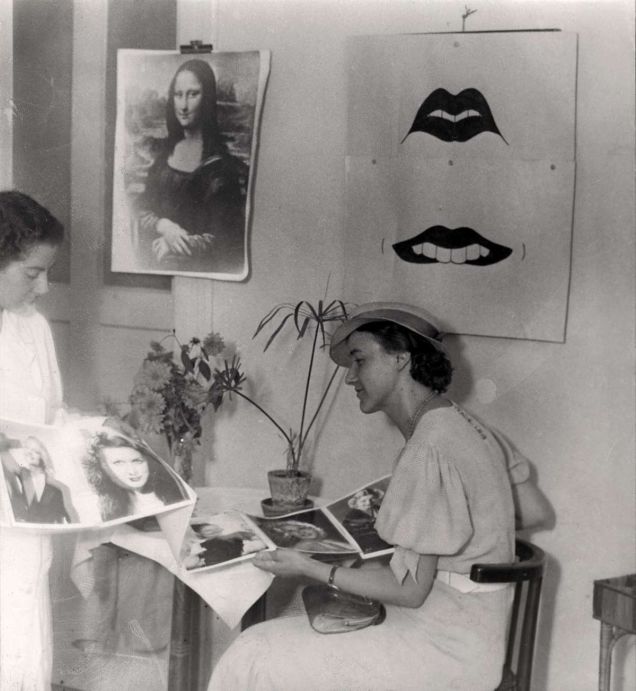 “In the Smile School of Budapest, a woman looks at the smiling woman’s faces held in front of her. On the wall, two smiles and the picture of Mona Lisa.” Het Leven, 1937

Gloomy Sunday, the popular 1933 hit of Rezső Seress was in fact propagated by the press as “the Suicide Song” or simply “the Killer Song” in more than a hundred languages all over the world, claiming that dozens, or even hundreds of people committed suicide because of it. It is, however, probable that this was one of the largest, deliberately constructed hoaxes of the century. The lyricist, László Jávor, who was also the criminal reporter of the 8 O’Clock News, mentioned in his reports on seventeen consecutive suicides, that the scores of Gloomy Sunday were found next to the corpse. What is more, this same newspaper attacked the song as inherently inspiring suicide, and demanded it be banned. An unprecedented international press career started on the wake of these articles. All this at a time, when the song, with a privately published score, was not played at all, had no recording at all, and was unknown in Hungary, so much so that even the fashionable bar pianists did not know what it was when foreign guests asked them to play it. So it is very strange that in Budapest they had to guard against the epidemic caused by it.


But the news is also supported by another source. The Dutch tabloid Het Leven published in the same year, 1937 a series of five photos – the five illustrations of this post –, which show you how the clients are taught how to smile in the “Smile School of Budapest”. 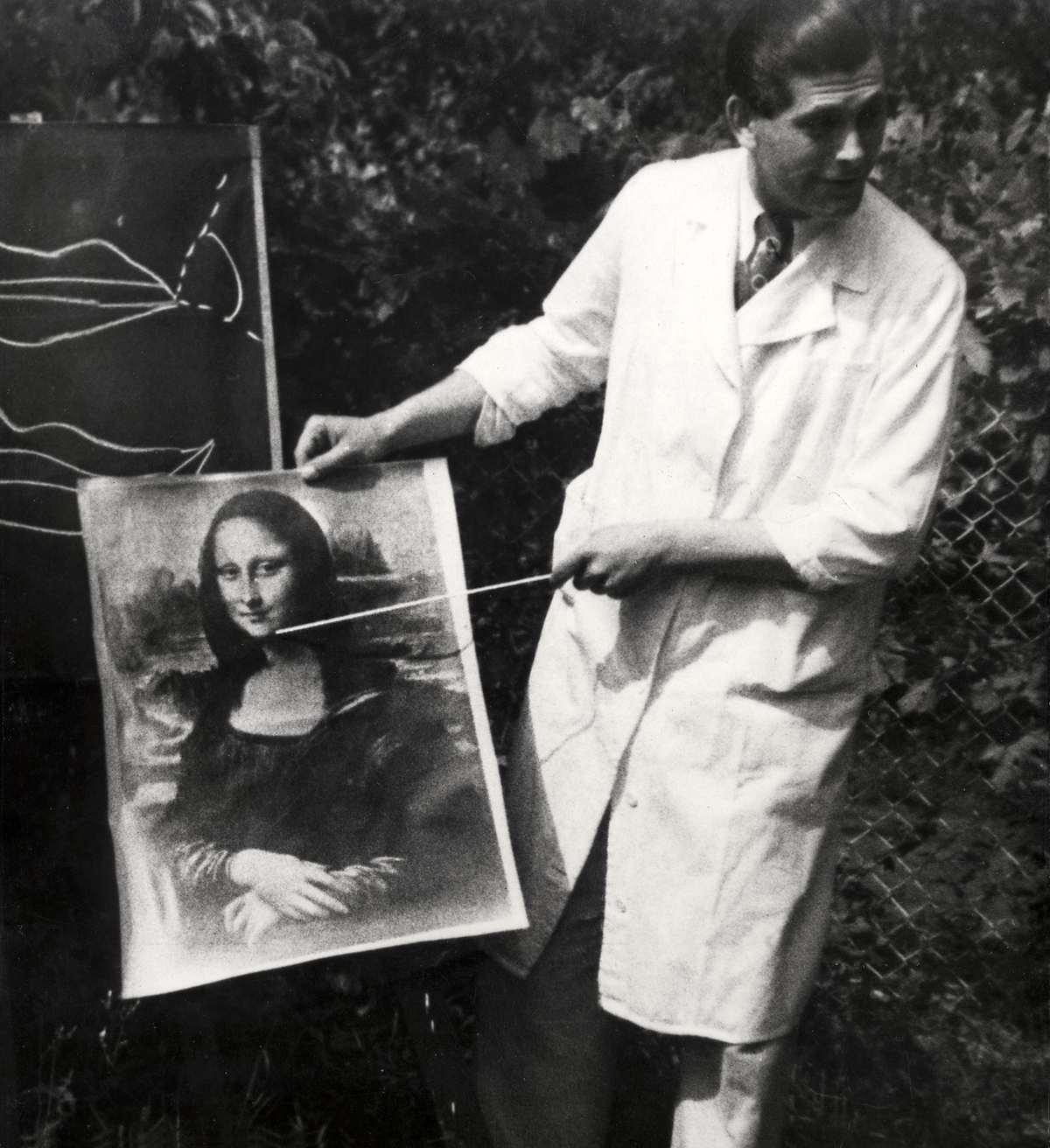 “In the Smile School of Budapest, a white-robed teacher points on the smile of Mona Lisa with his pointer.” Het Leven, 1937

But what was this Smile School?

The reporting on the school is quite similar to that of Gloomy Sunday. The photos from Het Leven started to spread at the beginning of this year from the photo archive of Het Leven, which was recently digitized and made public by the Dutch National Archive of The Hague. The photos first joined the text of the Australian newspaper in April on Retronaut, and since then they have only migrated together. They were also presented in the Hungarian blog of photo history Mai Manó, and finally, a few days ago, Miklós Vincze kneaded it all together into a striking and coherent story in Englisn for io9. The story keeps spreading, and now it even has a Russian version. In Hungary, however, I think there is no living person who has ever heard of such a school. 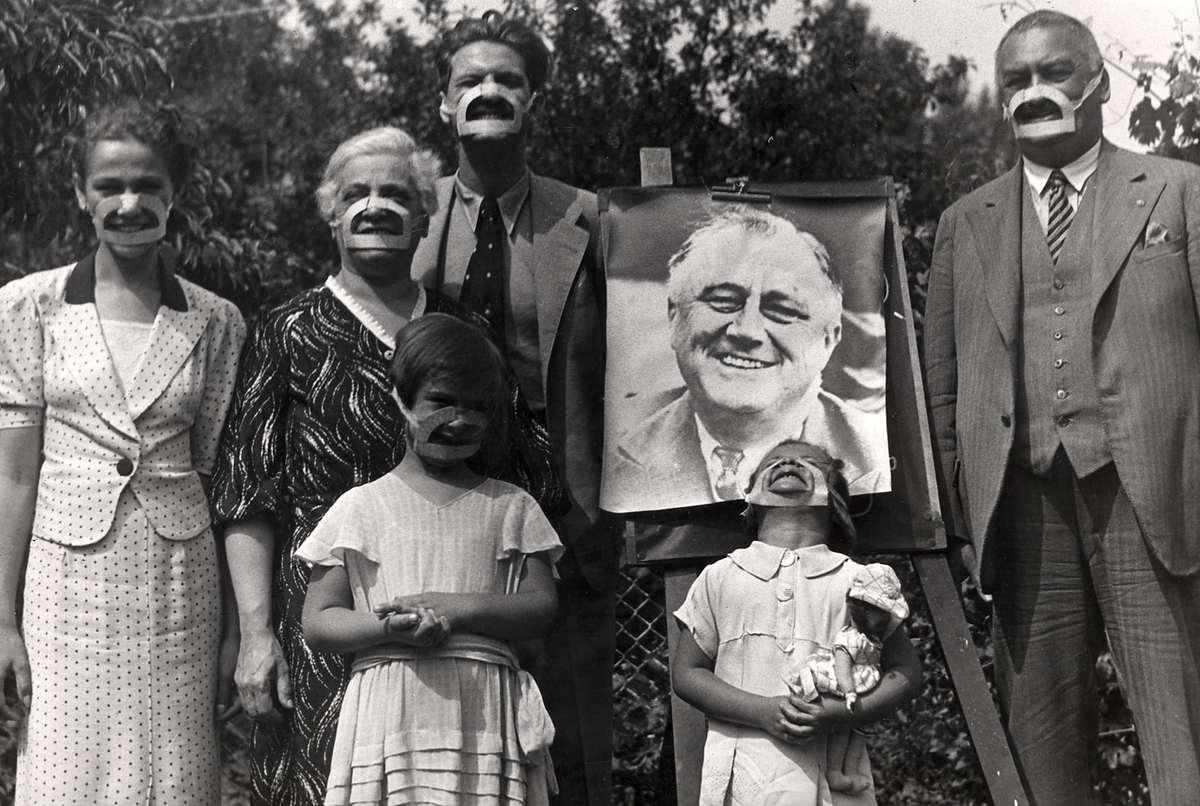 “Outside of the Smile School of Budapest, six people wearing masques which forces smile on their faces. In the midst of them, the portrait of a laughing man.” Het Leven, 1937 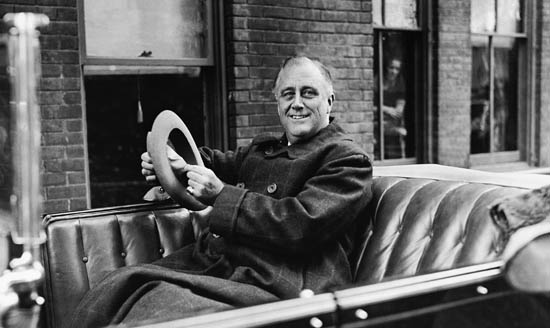 The laughing man is President Franklin D. Roosevelt, who was an award-winning champion of smiling indeed, but I do not know how many people would recognize him in 1937 in Budapest, and how much it was appropriate to teach his smile there in that year. But it is clear that the Australian newspaper listed the same smile models who also figure here, as if they collected them from these photos. 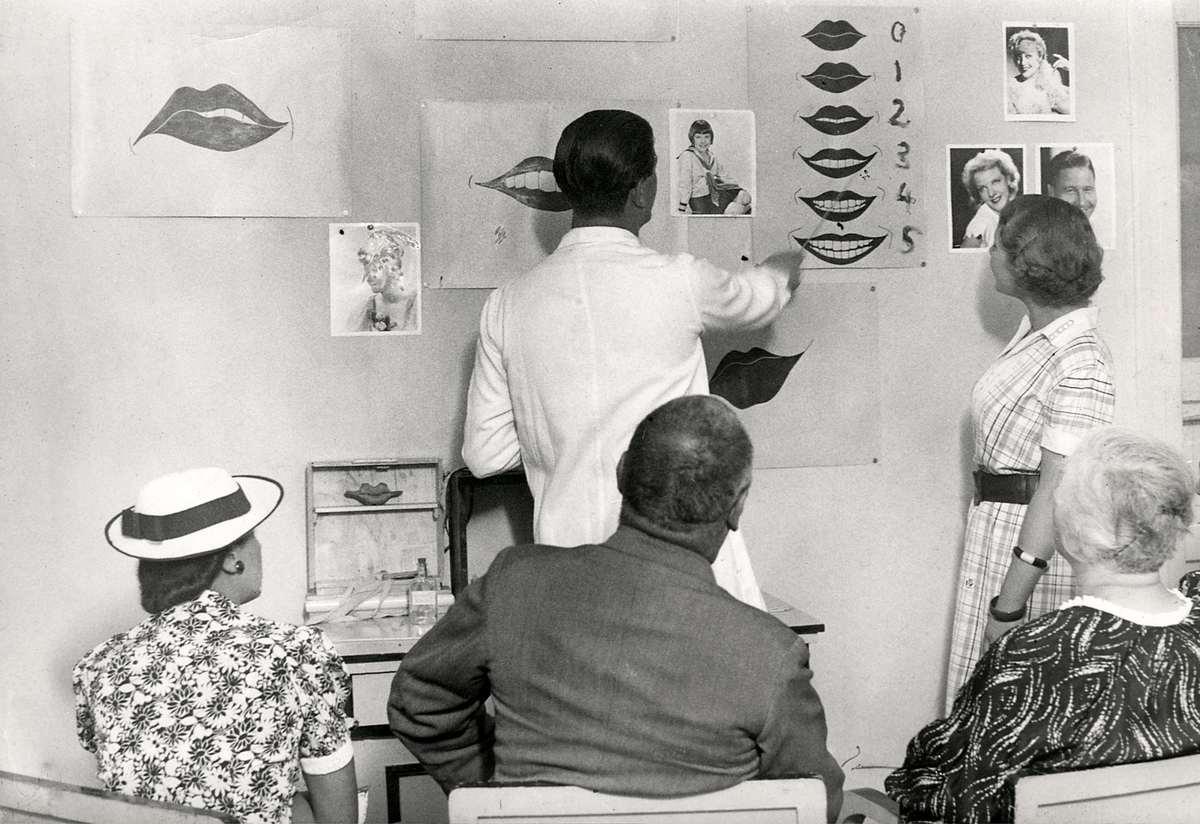 “In the Smile School of Budapest, the clients watch the white-robed teacher pointing out the five phases of a smiling mouth.” Het Leven, 1937

But Budapest did not belong to the most important themes of Het Leven. In their photo archives from 1916 to 1941 we only encounter the city six times. It is therefore strange, that now they publish such a well-informed report from the Hungarian capital. The other five occasions also include one more City of Suicides topic, which surely excited their readers, when in 1937 they published an obviously staged photo series about a woman jumping from the second floor of a building in Budapest.

Het Leven, as is written in the introduction to their photo archive, was a tabloid, which was characterized as “hard news photography, paparazzi photographers, aggressive, penetrating and sensational style”, and they did not shrink from staged photos or open hoaxes in the interest of quelling the hunger for sensation of their readers. Is it possible that this time the same thing happened?

The key to the solution is probably a third site, not quoted by anybody, where the same pictures figure: in the archive of Het Leven’s American namesake, Life. On 6 September 1937 this magazine also published a short article on the Smile School in Budapest. 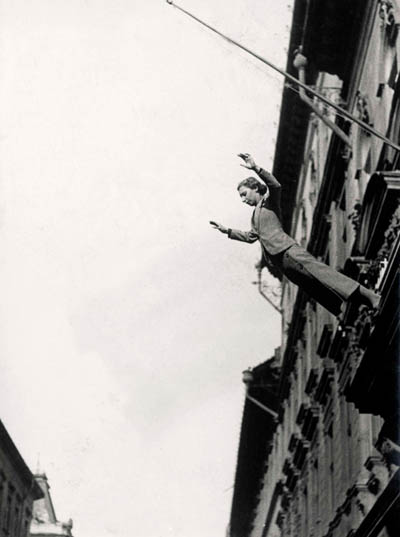 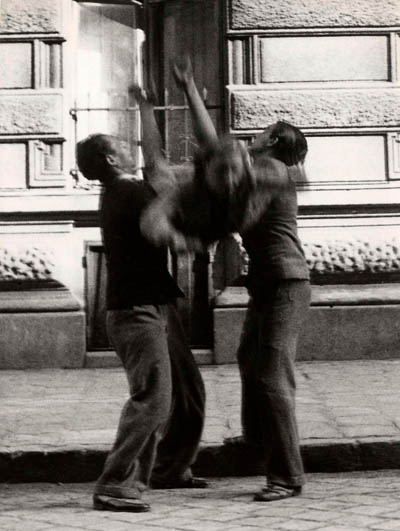 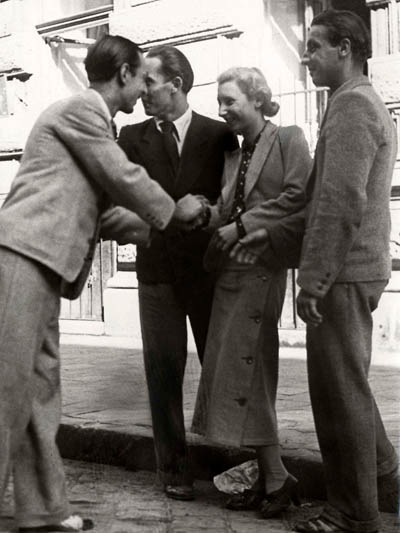 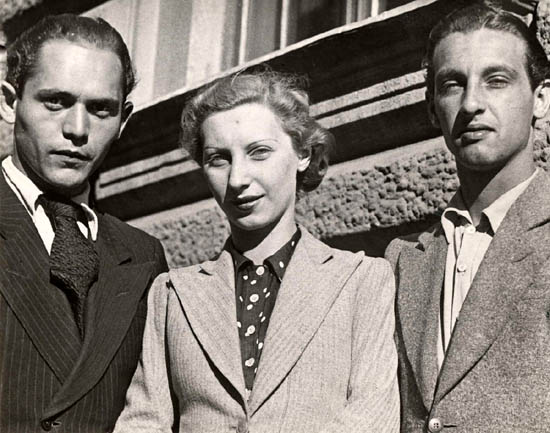 “BUDAPEST, “CITY OF SUICIDES,” IS TAUGHT TO FORCE A SMILE

A joker in Budapest, Hungary lately evolved the “smile school” shown on these pages. The idea was to counteract the bad publicity Budapest has gotten from the number of suicides supposedly inspired by the Budapest song, Gloomy Sunday. The suicide rate in Budapest is actually very high. Patrol boats are stationed day and night along the Danube, near the Budapest bridges, to rescue citizens who try to do away with themselves by drowning.

The smile school is a hoax backed by “Prof.” Jenö and a hypnotist named Vincze. They claim to charge up to $500 for teaching the Roosevelt smile in six weeks. The Mona Lisa smile is more difficult but cheaper. Jenö now has 45 students. He says better business is enabling pupils to smile naturally.”

If a hoax, then a hoax. The only question is whether it was a hoax arranged in Budapest, or rather in America. I vote for the latter. This is suggested by the clothes, the faces, the environment. It was the American public, rather than the Hungarian, who was responsive to Roosevelt’s portrait, and in general to the whole story, because it was in America that the earlier hoax prepared the field for this later one.

The beginning and ending key wording of the Australian article is the City of Smile. Maybe it is not too bold an assumption that as the first, and so also the second hoax were inspired by Hungarian song: this one The Land of Smile by Ferenc Lehár, which was presented in 1929 with great success in Berlin, and was at this time at the peak of its popularity. Both the title and the basic thesis of this operetta – an opposition of forced smiles and disappointment in love –, set in an exotic Eastern European and Chinese environment, may have paved the way to the idea of “Prof. Jenö and the hypnotist named Vincze”. 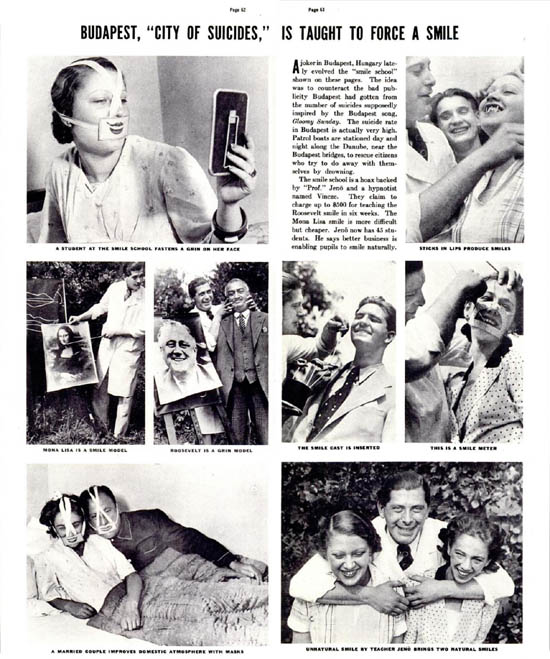 By the way, whence the names of these early Borats, Jenő and Vincze? The simplest answer is that the two Hungarians creating this undertaking – or hoax – were, indeed, named this. But what if they were not even Hungarians? Even then, some Hungarian names had to be found for them. I do not think it unlikely that both of them borrowed his name from the Hungarian world champion footballer Jenő Vincze, during these years at the top of his career.

Unless our whole theory, as it is, is a mistake, and in fact the truth is what was written by sancane, an author of extraordinary fantasy, under the five photos of Het Leven in the May issue of da Parte. His inspired text, which fills the gaps in the sparse documents presented above, erects a monument more lasting than bronze to the genial Hungarian hypnotist Sarkady Jenő (1894-1965), about which, unfortunately, we do not have any other data aside from this epitaph, and it is no longer probable that any will ever pop up:

Sarkady Jeno (1894-1965)
a Hungarian hypnotist with great practical geniality and prompt treatment.
Founder of the School of Smile.
With his special genius, in the years following World War I, he confronted
the grave sadness etched on the faces of the people living along the Danube.
To counter the stricken appearance and the suicidal epidemic, the anxieties
and disturbing thoughts of his contemporaries, he founded the “Smile Club”,
this society of scientists to train the human face to show the signs of joy,
the act of smiling, to burst forth in mockery, to extrinsic complacency,
thus opposing the ignoble semblance of modern age.
The reward was quantified according to the types of smiles to
learn, which varied in intensity and depth of devotion.
The price-list included the smiles of Roosevelt, Mona Lisa,
Clark Gable, Dick Powell, Loretta Young, and many others.
Smile on the lips, to heal the ancient disease of Budapest!

The heroic enterprise of the undeservedly forgotten Doctor Sarkady is today more topical than ever.

The song Gloomy Sunday (also known as the Hungarian Suicide Song), mentioned above, was composed by Rezső Seress and published in 1933. It became well-known after Billie Holiday covered it eight years later.

There have been several urban legends regarding Gloomy Sunday, because the number of Hungarian suicides peaked in the 1930s and press reports linked them to the song. There were also stories about radio networks banning the song, but only BBC did it with the Billie Holiday version in 1941, which was "detrimental to wartime morale." Here is the original version:

Lithuania is mainly known for being a 1/3 of the Baltic States and for fantastic basketball players. Yet there’s so much more to this...
Read more

Mobile phone has been a status symbol for a long time now. However, the one phone that soars above the rest is of course...
Read more

Olive oil is a fat obtained from the fruit of the Olea europaea (olive tree), a traditional tree crop of the Mediterranean region, where...
Read more

Most Beautiful Girl Selling Street Food. A sexy stall vendor in Taiwan has become an internet sensation after a video and pictures of her...
Read more
Load more