The thylacine was the largest known carnivorous marsupial of modern times. It is commonly known as the Tasmanian tiger (because of its striped lower back) or the Tasmanian wolf. Native to continental Australia, Tasmania and New Guinea, it is believed to have become extinct in the 20th century. It was the last extant member of its family, Thylacinidae; specimens of other members of the family have been found in the fossil record dating back to the late Oligocene.

Like the tigers and wolves of the Northern Hemisphere, from which it obtained two of its common names, the thylacine was an apex predator. As a marsupial, it was not closely related to these placental mammals, but because of convergent evolution it displayed the same general form and adaptations. Its closest living relative is thought to be either the Tasmanian devil or the numbat.

we have 12 facts that you may or may not have known about Tasmanian Tiger.


1. RESEMBLANCE TO DOGS WAS TOTALLY SUPERFICIAL. 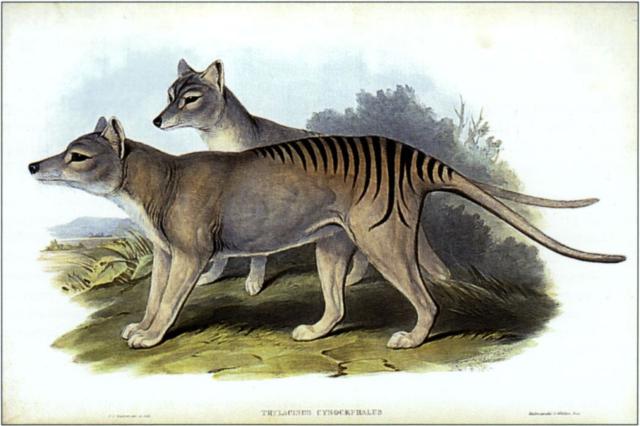 A classic painting of the Tasmanian Tiger (John Gould)

The thylacine got the nickname the “Tasmanian tiger” or the “Tasmanian wolf” because it looked and acted like a strange combination of the two animals. As marsupials, however, they were only distantly related to felines and canines. These very different carnivores independently evolved similar features and even (more or less) assumed the same environmental niche. This phenomenon—when near-identical traits appear in two unrelated organisms—is known as "convergent evolution" and takes place all the time. 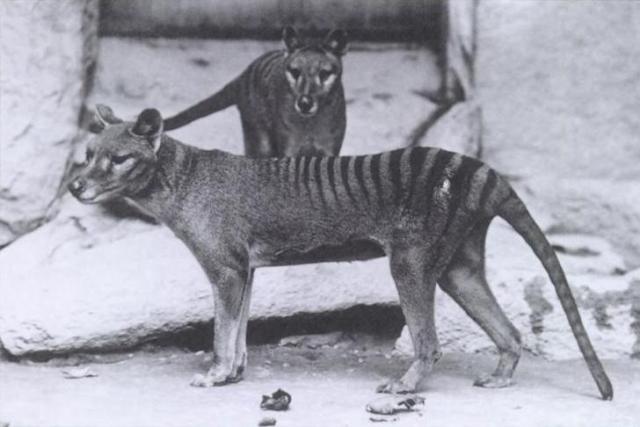 The Tasmanian Tiger earned its name because of the distinctive stripes along its lower back and tail, which were actually more reminiscent of a hyena than a big cat. In fact, though, this "tiger" was a marsupial, complete with a characteristic pouch, and thus more closely related to wombats, koala bears and kangaroos. (Another nickname, the Tasmanian Wolf, is a bit more apropos, given this predator's resemblance to a large dog.)


3. The Tasmanian Tiger Is Also Known as the "Thylacine" 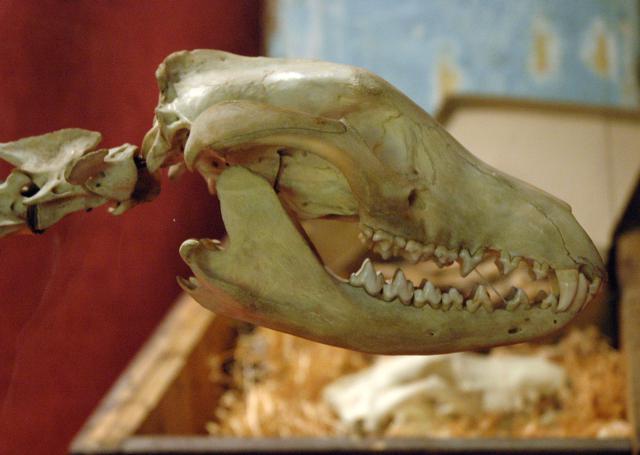 If "Tasmanian Tiger" is a deceptive name, where does that leave us? Well, the genus and species name of this extinct predator is Thylacinus cynocephalus (Greek for "dog-headed pouched mammal"), but experts more commonly refer to it as the Thylacine. If that word sounds familiar, it's because it contains one of the roots of Thylacoleo, the "marsupial lion," which vanished from Australia about 40,000 years ago.


4. The Tasmanian Tiger Went Extinct in the Mid-20th Century 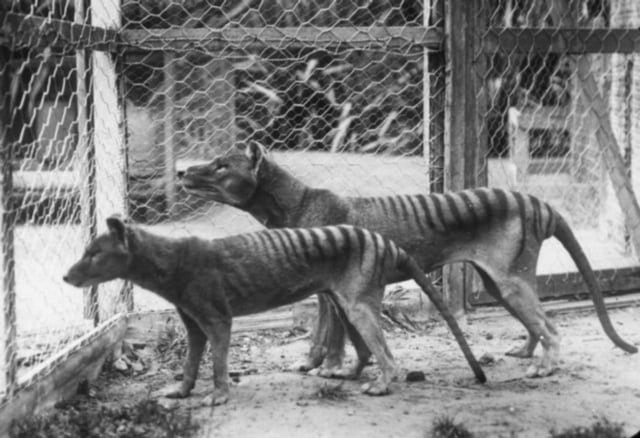 About 2,000 years ago, Australia's Thylacine population dwindled rapidly. The last holdouts of the breed persisted on the island of Tasmania, off the Australian coast–until the late 19th century, when the Tasmanian government put a bounty on thylacines because of their predilection for eating sheep. The last Tasmanian Tiger died in captivity in 1936, but it may yet be possible to de-extinct the breed.


5. Both Male and Female Tasmanian Tigers Had Pouches 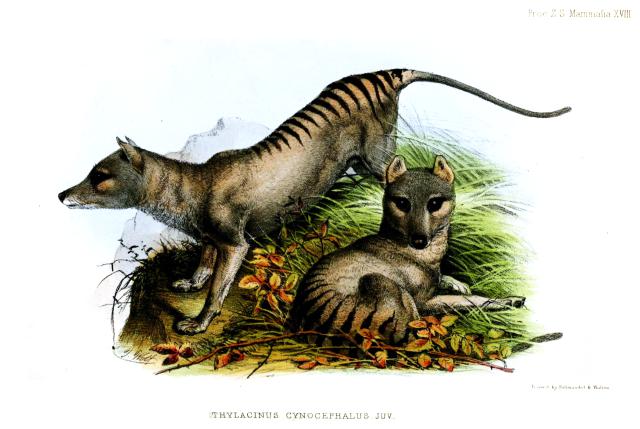 In most marsupial species, only the females possess pouches, which they use to incubate and protect their prematurely born young. Oddly enough, Tasmanian Tiger males also had pouches, which covered their testicles when circumstances demanded (presumably when it was bitterly cold outside or when they were fighting with other Thylacine males for the right to mate with females). 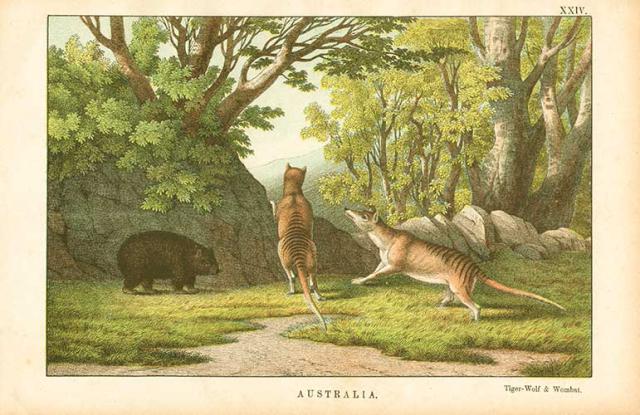 Although Tasmanian Tigers looked like dogs, they didn't walk or run like modern canines. When startled, Thylacines briefly hopped on their two hind legs, and eyewitnesses attest that they moved stiffly and clumsily at high speeds. Presumably, this lack of coordination didn't help when Thylacines were mercilessly hunted by Tasmanian farmers or chased by their imported dogs!


7. The Tasmanian Tiger Is a Typical Example of Convergent Evolution 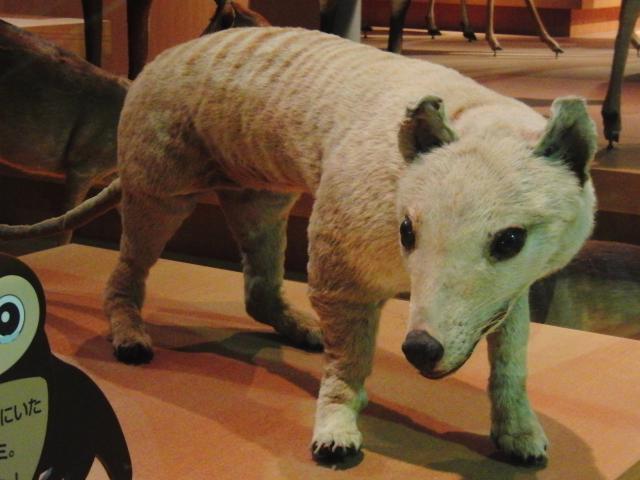 Animals occupying the same ecological niches tend to evolve the same general features; witness the similarity between ancient, long-necked sauropod dinosaurs and modern, long-necked giraffes. For all intents and purposes, the role the Tasmanian Tiger played in Australia, Tasmania and New Guinea was "wild dog"–to the extent that researchers have a hard time distinguishing dog skulls from thylacine skulls! 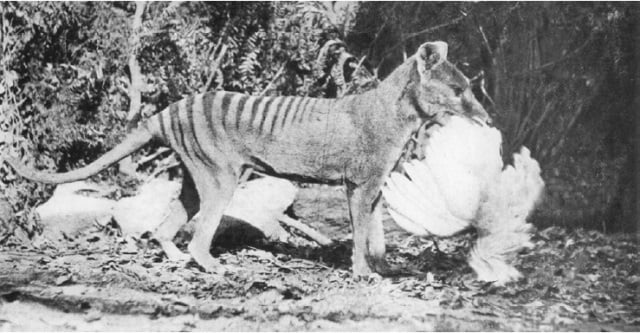 By the time the first humans encountered the Tasmanian Tiger, the Thylacine's population was already dwindling. Hence, we don't know whether the Tasmanian Tiger hunted at night as a matter of course, or if it was forced to rapidly adopt a nocturnal lifestyle because of human encroachment. In any case, it would have been much harder to find, much less shoot, a sheep-eating Thylacine in the middle of the night!


9. The Tasmanian Tiger Had a Surprisingly Weak Bite 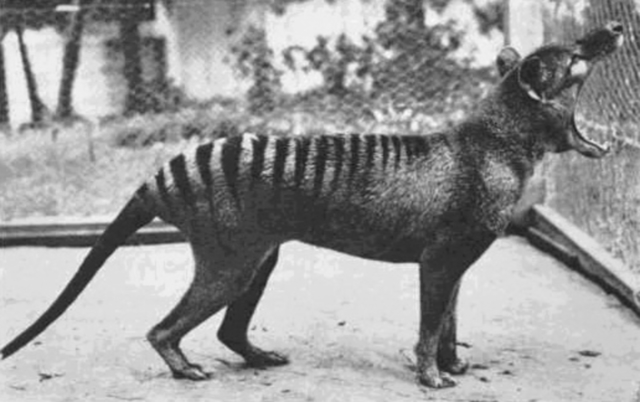 Until recently, paleontologists speculated that the Tasmanian Tiger was a pack animal, capably of hunting cooperatively to bring down much bigger prey–such as, for instance, the SUV-sized Giant Wombat. However, a recent study has demonstrated that the Thylacine had comparatively weak jaws, and would have been incapable of tackling anything bigger than a small wallaby or baby ostrich.


10. The Thylacine's Closest Living Relative Is the Banded Anteater 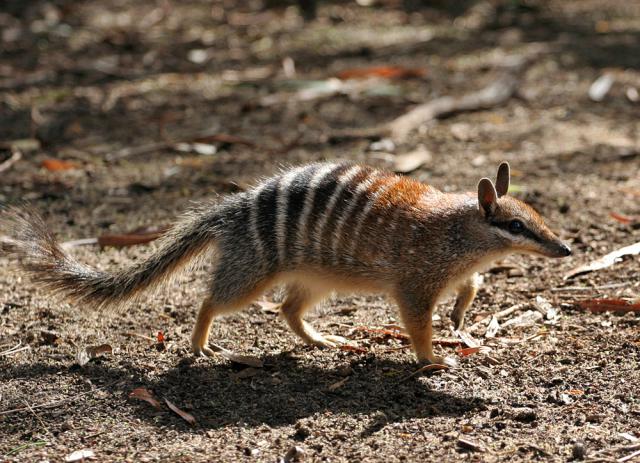 The Numbat, the closest living relative of the Tasmanian Tiger (Wikimedia Commons).

There were a bewildering variety of marsupials in Australia during the Pleistocene epoch, so it can be a challenge to sort out the evolutionary relationships of any given species. It was once thought that the Tasmanian Tiger was closely related to the still-extant Tasmanian Devil, but now the evidence points to closer kinship with the Numbat, or banded anteater, a smaller and much less exotic beast. 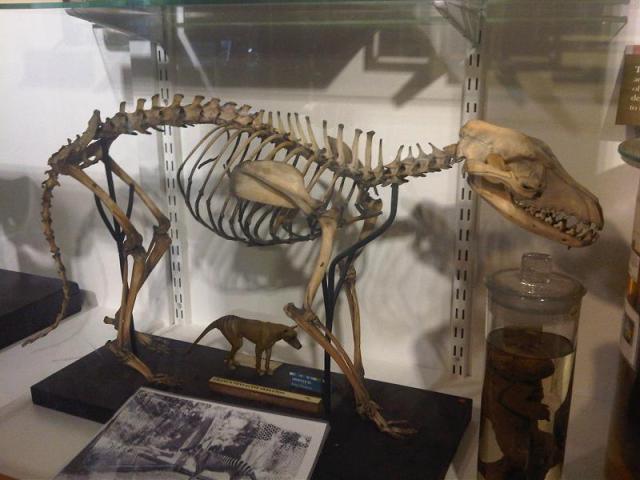 Given how recently the last Tasmanian Tiger died, it's reasonable to assume that scattered adults roamed Australia and Tasmania into the mid-to-late 20th century–but any sightings since then are doubtless the result of wishful thinking. The American media tycoon Ted Turner offered a $100,000 bounty for a living Thylacine in 1983, and in 2005, an Australian news magazine upped the prize to $1.25 million. 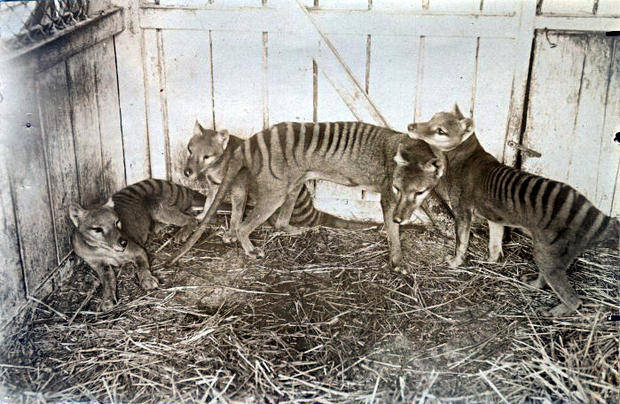 Thylacines are often mentioned in the same breath as Bigfoot and the Loch Ness monster. Since Benjamin’s abrupt demise, more than 3000 unconfirmed “sightings” of live specimens have been reported. In 1983, CNN’s founding father raised the stakes by promising $100,000 in exchange for proof of the thylacine’s survival (he later revoked the offer).