Lithuania's national treasure, the Hill of Crosses, has a troubled and mysterious history. The Soviets repeatedly tried to destroy it. Now, it's become a symbol of the nation's struggle and spirituality. The Hill of Crosses — a small mountain of approximately 100,000 crosses — is a curious phenomenon. No one manages or organises it — it just is. The Soviets razed it again and again, only to have the crosses reappear. As Prof Viatanis Rimkis explains: "During the struggle for our freedom, the crosses became a weapon that was invincible." 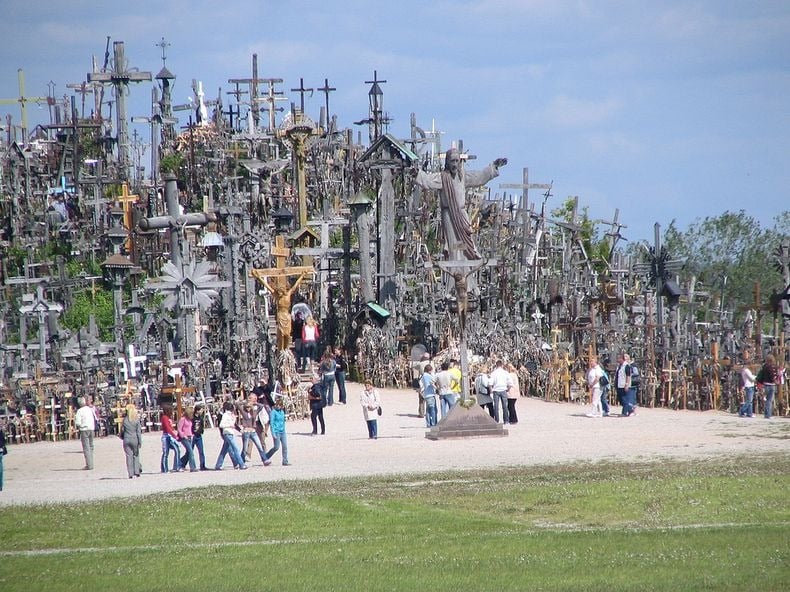 The precise origin of the practice of leaving crosses on the hill is uncertain, but it is believed that the first crosses were placed on the former Jurgaičiai or Domantai hill fort after the 1831 Uprising. 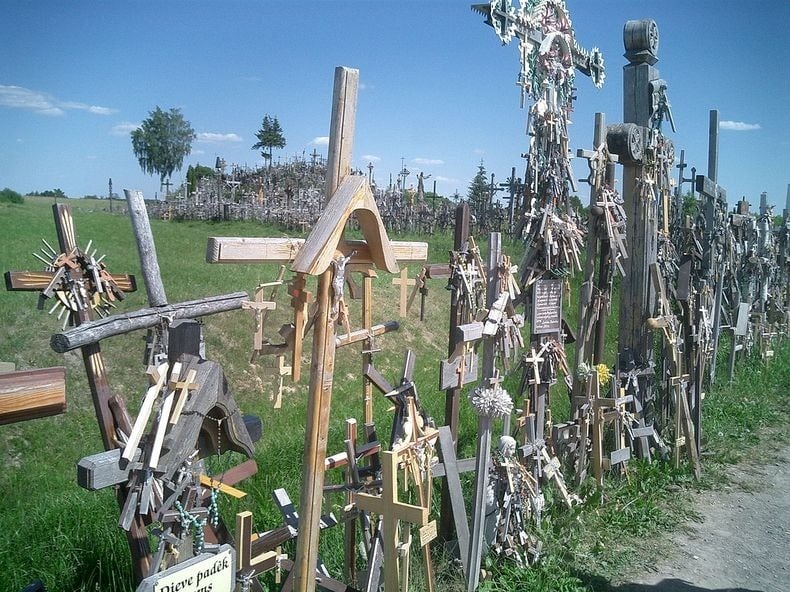 Over the centuries, not only crosses, but giant crucifixes, carvings of Lithuanian patriots, statues of the Virgin Mary and thousands of tiny effigies and rosaries have been brought here by Catholic pilgrims. It is estimated that there are over 100,000 crosses on the hill. 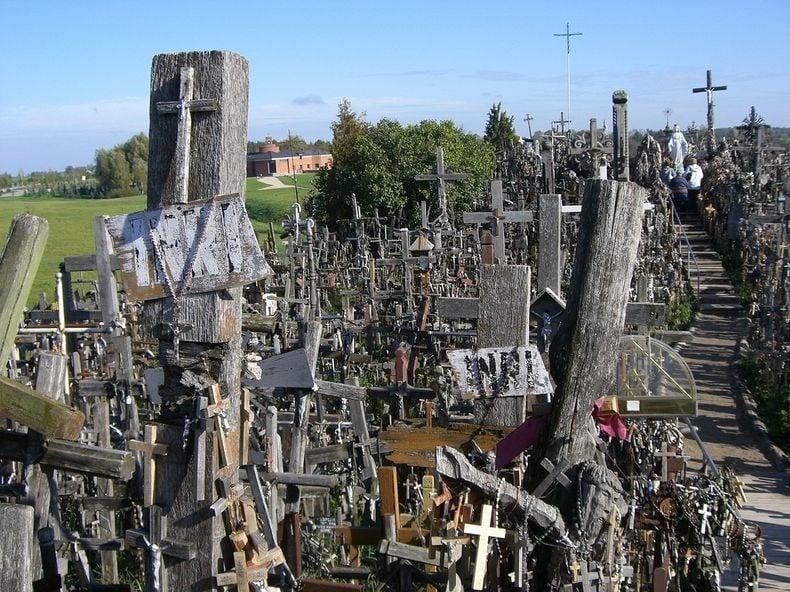 Sources vary as to when the crosses first started appearing on the hill near Siauliai. One story is that in the thirteenth century, when Lithuania was mostly Pagan and before it had been Christianized, a group of Pagans burned down a church on that spot. 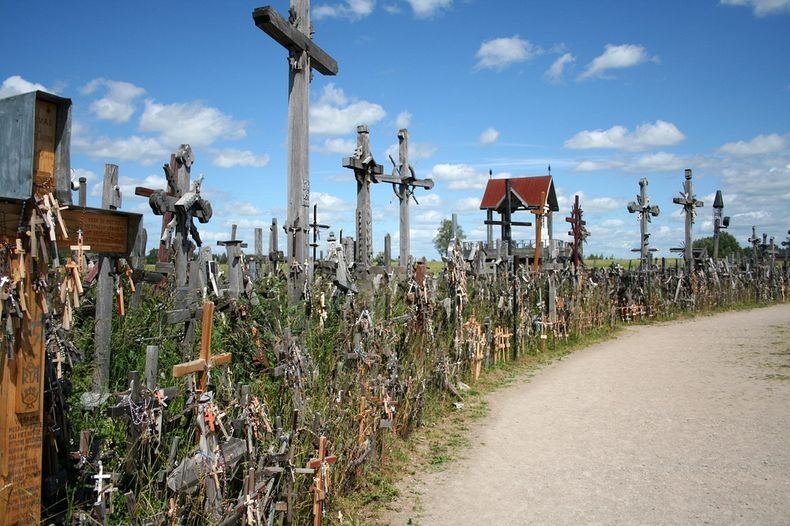 The remnants formed two hills and as a memorial to the priests of that church people started placing Crosses there. Many variations to this story exist, such as two Christian crusaders were passing by and were killed at that spot, as opposed to there ever being a church there. 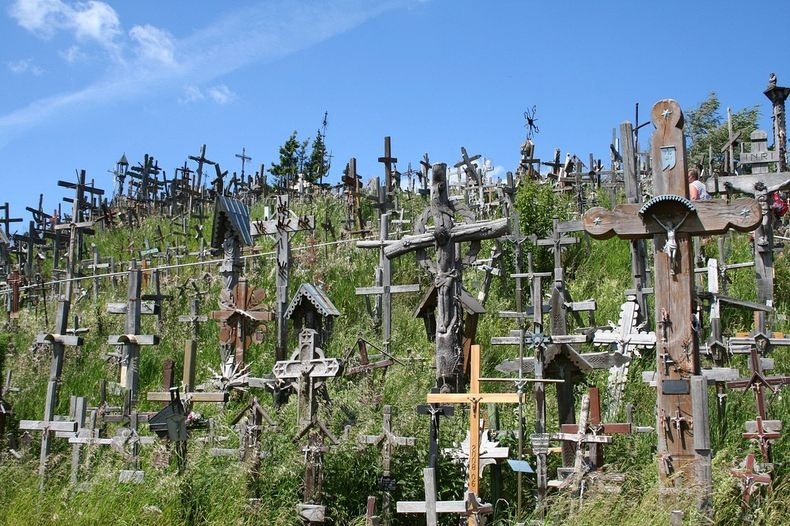 The site was first mentioned as early as the 14th century. In more recent times, the Hill has become a source of national pride. This occurred during 1831 and 1863, when anti-Soviet uprisings occurred, and once again during the 50 year Soviet occupation of Lithuania, which began with the second world war. 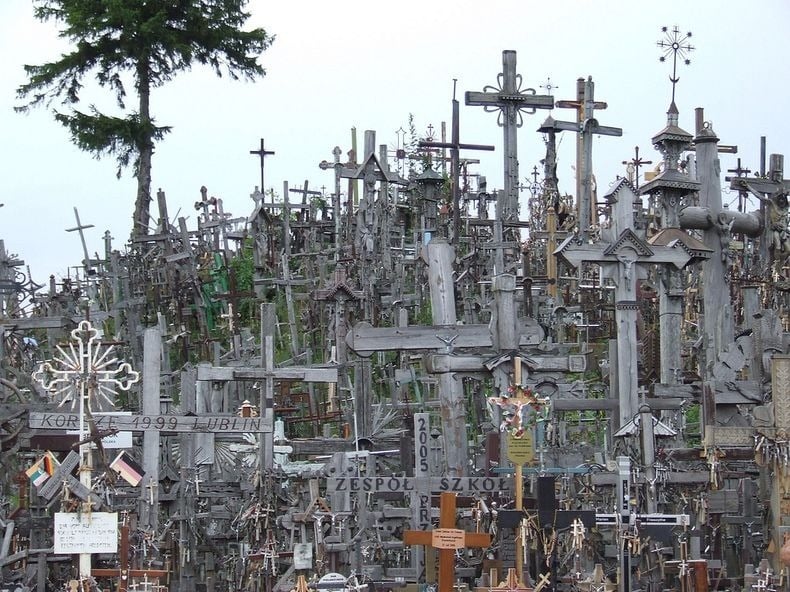 The Soviets bulldozed the hill three times and dug a ditch around the hill to stop anyone from entering this site. Yet people continued to plant crosses. Planting a cross was considered a punishable crime by the Soviets, yet crosses continued to appear. 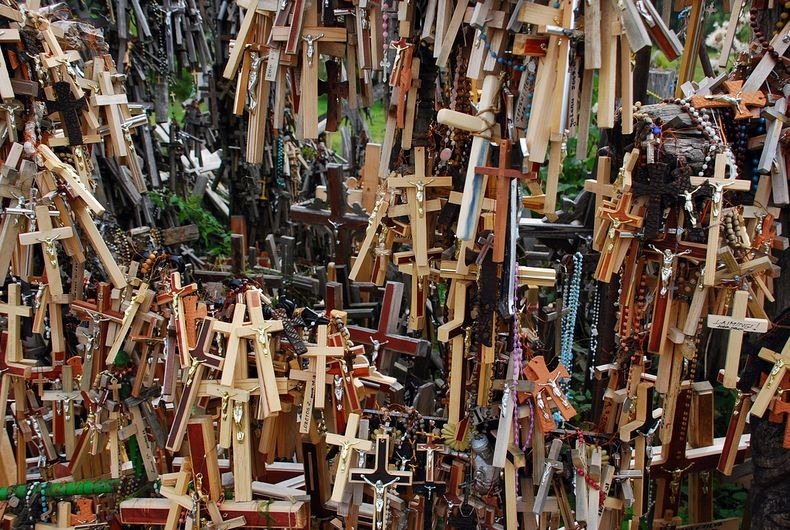 In 1991, with the advent of Lithuanian independence, the Hill of Crosses became a national symbol of the fight for independence. At that time, an estimated 35,000 crosses were already laid, varying in size from a few centimetres to 4 meters. The Pope John Paul II paid homage to the site in 1993 and donated a statue of the crucified Christ. 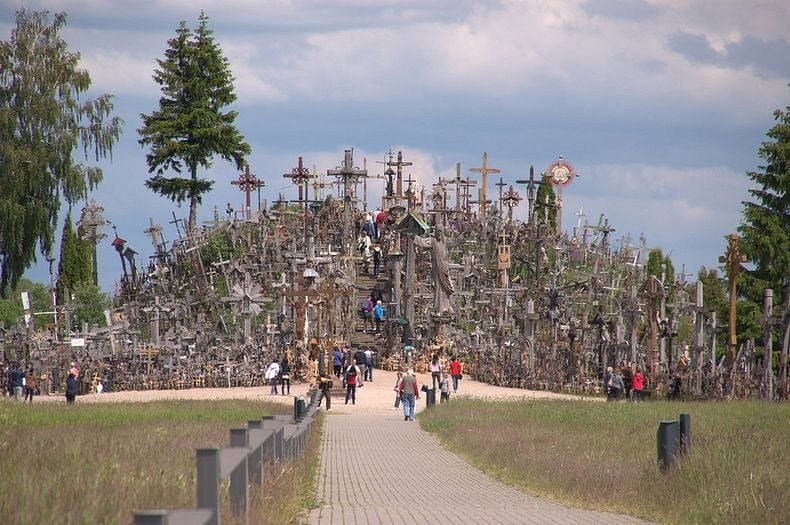 Today, the crosses number in the hundred of thousands and is visited by many thousands of visitors and pilgrims from all over the world.

Tell us more about your favourite places in comments below!

5 Most Terrifying Creatures of the Night !

The 10 Greatest Conquerors in the History of...

The history of mankind is one sculpted by the results of epic wars. From the earliest forms of society through to the modern day,...
Read more

What’s The Difference Between utf8_general_ci and utf8_unicode_ci ?

There are at least two important differences: Accuracy of sorting utf8_unicode_ci is based on the Unicode standard for sorting, and sorts accurately in a very wide...
Read more

A collection of 20 super cute and adorable photo memes! These babies may melt your heart lol. If Babies Could Talk! 20 Hilarious Baby...
Read more

Video that Will Move Your Heart | Do...

My mother is a sex worker. So Does it make me a sex worker too. Does it give you right to treat me differently. we call...
Read more

This video tells how it is important to take that first step overcoming you fears and inhibitions. Destination will seem clear all you need to...
Read more
Load more