Black is not an uncommon color in the animal world; bears are black, gorillas are black, there are breeds of dogs and...
Read more
Photos

In 1970, only two mosques existed in the country, but now more than 200 offer sanctuary to Japan’s Muslims.

The history of Islam in Japan is relatively brief in relation to the religion’s longstanding presence in other nearby countries. Islam is one of the smallest minority faiths in Japan, having more adherents in the country than the Bahá’í faith, but fewer than Christianity. Muslim population is Japan is around 100,000 which includes less than 10,000 of them as Japanese and the rest being foreigners (Majority of them are nationals from Southeast Asian countries).

There are isolated records of contact between Islam and Japan before the opening of the country in 1853, possibly as early as the 1700s; some Muslims did arrive in earlier centuries, although these were isolated incidents.

Tokyo, Japan – Tokyo Camii, or the Tokyo Mosque, is a curious sight, both stunning and subtle. Despite the grand Turkish design, the mosque hides between apartment blocks in the quiet residential neighbourhood of Yoyogi Uehara.

Construction of the current incarnation of the mosque was completed in 2000, but the mosque has a much longer history. It was in the 1930s when Japan first saw a significant resident Muslim population and the first mosques were established. The Nagoya Mosque was built in 1931 and the Kobe Mosque in 1935 by Indian-Muslim migrants.

Tatar Muslim migrants escaping the Russian revolution made the largest ethnic group in Japan by the 1930s and established the original Tokyo Mosque in 1938.

Hans Martin Kramer, a professor of Japanese Studies at the University of Heidelberg and an expert on religion in Japan, considers this to be the most prominent mosque in Japan, one that was “not only supported by the Japanese government, but also financed by Japanese companies, most notably Mitsubishi, and its opening ceremony was attended by dignitaries and diplomats from both Japan and the Islamic World”.

While the Tokyo Camii does not have the same support and contacts with Japanese government and large conglomerates in contemporary times, the mosque was rebuilt using funds from the Turkish government and is both a religious venue and an ethno-cultural space hosting wedding ceremonies, fashion shows, plays, exhibitions and conferences.

Away from the tourists, marble floors and ornate interiors in a small alley around the corner from Tokyo Camii is Dr Musa Omer at the Yuai International School. The school is loud, unpretentious, chaotic and teeming with children. It is a Saturday and the school has activities and classes from 10am until 8pm. While the leadership at the school is looking towards offering full-time education in the near-future, it is currently limited to offering Saturday classes ranging from Islamic studies and Arabic, to karate and calligraphy.

The school is run by the Islamic Centre of Japan (ICJ), a post-WWII Muslim institution established in 1966. Omer – an advisor to the Saudi Ambassador and who has twice served as the Sudanese Ambassador to Japan – is its acting chairman.

On this day, Omer is preparing to marry a young couple in his small office – a Saudi man and a Japanese woman. Omer works on the marriage certificate and answers questions simultaneously. Like the atmosphere in the school, the wedding is informal and relaxed with both the bride and groom dressed casually. She is converting to Islam and will move to Saudi Arabia soon.

In a brief interlude, the woman is asked whether this is her first introduction to Islam, and she replies that it isn’t. Her relationship with the Saudi man started online two years ago and they decided to get married. Omer, with long-established links to the Saudi embassy, was contacted to assist the couple in arranging the wedding.

As the Japanese bride converts, she joins a tiny group of Japanese Muslims. In the absence of official statistics on Muslims in Japan, demographic estimates range from between 70,000 to 120,000 Muslim residents with about 10 percent of that number being Japanese, in a country with an overall population of more than 127 million.

According to the International Organisation for Migration (IOM), the population of foreign workers in Japan has nearly doubled in the last 20 years, and reached more than two million at the end of 2011. 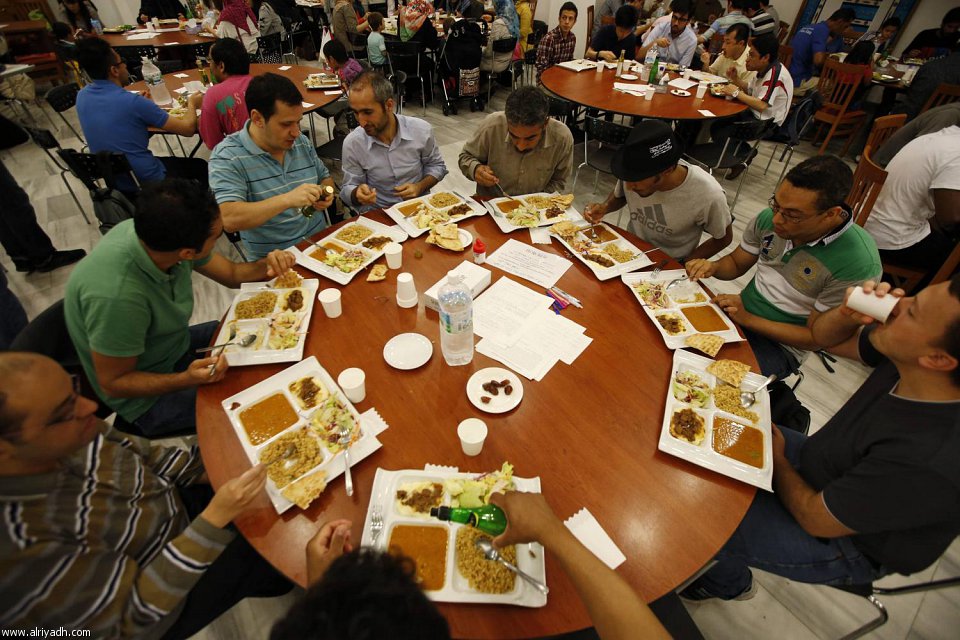 Muslim men in Japan have iftar, breaking of fast meal, during the holy month of Ramadan at Tokyo Camii in June [Reuters]

Yoshio Sugimoto describes how the population of foreign workers, which includes Muslims from Pakistan and Bangladesh for example, increased in the late 1980s and early ’90s as visa waiver programmes were introduced by the Japanese government to address an ageing workforce and a shortage of labour.

Omer, on the other hand, came to study architecture on a Japanese Embassy scholarship in 1970 after founding the Japan-Sudan Friendship Society in 1964 in Khartoum, Sudan. He speaks with pride at how Islam has grown and laid institutional foundations in Japan.

“There were just two mosques in Tokyo when I came over in 1970,” he says. Now there are 200 mosques and musallahs, or temporary sites used to pray.

Omer is an influential figure in the institutionalisation in post-WWII Japan with deep roots in the country, privileged position as a former diplomat, and contacts in the Gulf. He has helped various groups raise funds to establish mosques and institutions. Despite that, the Islamic Centre of Japan itself does not have a mosque of its own.

Activities for children in the school, which was established in 2011, are far more important than a mosque, he says. “You can pray anywhere.”

The ICJ has had to cut its annual spending by almost half since the early 1990s, and currently only employs one full-time staff member, down from 25, with its funds coming primarily from donations by individuals in the Gulf.

Some researchers have highlighted negative stereotypes of Islam that Muslims have been confronted with in Japan since the September 11, 2001, attacks on the United States. 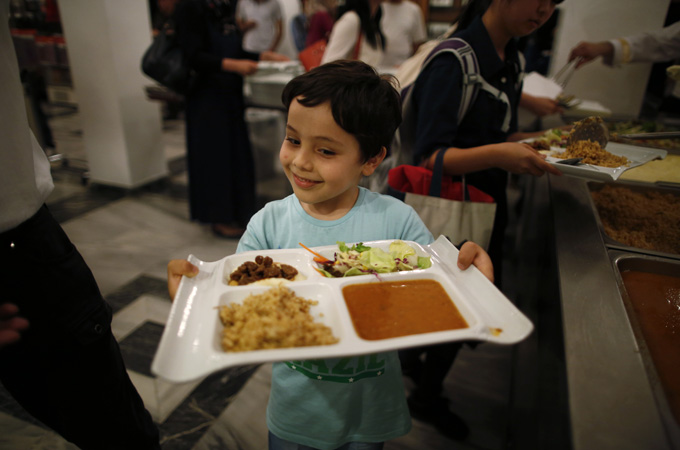 Despite the Tokyo Metropolitan Police being absolved of any wrongdoing by the Tokyo District Court in January, the UN Human Rights Committee has expressed concerns in a recent report about the systematic surveillance of Muslims and mosques in Japan.

“Police stationed agents at mosques, followed individuals to their homes, obtained their names and addresses from alien registration records, and compiled databases profiling more than 70,000 individuals,” according to an article in the Asia-Pacific Journal Japan Focus. “In some cases, the police actually installed surveillance cameras at mosques and other venues.”

Omer says he prefers to look at the environment in the aftermath of the 9/11 attacks as one that “opened doors to speak to people” in Japan about his faith with heightened “interest” in Islam.

While Islam may not have the same footprint in Japan as other religions such as Buddhism and Christianity, knowledge of it and the Prophet Muhammad here can be traced back to the 8th century.

Serious and sustained engagement with the Muslim world began for Japan as a part of its global outreach in the early Meiji period (1868-1890), with trade and information gathering missions sailing towards the Ottoman Empire and the Middle East.

Verifiable accounts of Muslims entering Japan can be placed in the same period with records of Indian merchants and Malay-Indian sailors working in ports in the Japanese cities of Yokohama and Kobe.

The Tokyo Mosque, Omer, the Islamic Centre of Japan, and the children of the Islamic school are the contemporary chapter of this old and under-researched history of Islam and Japan.

What Do Japanese People Think About Muslims?

Lena Headey transforms into Cersai as she teaches...

Lena Headey plays Cersei Lannister on Game of Thrones and Jimmy is obsessed with the show. He thinks that no one drinks wine like...
Read more

Mumbai Metro- Get Ready For The Ride |...

Finally, Mumbai gets its Metro Jaws will drop, the traffic will stop, when the Metro goes from the top. Watch the magic of Mumbai Metro...
Read more

What If Christopher Nolan Directed The Incredibles Film...

Bobby Burns imagines the Pixar classic as if it were helmed by Christopher Nolan may be the closest we will ever get to seeing...
Read more

Baby is Bollywood's most grown-up action drama yet. Its scale is lavish, zipping between India, Nepal, Turkey and the Middle East, and its performances...
Read more