Not long ago, Malcolm Gladwell made a bold prediction. Fifty years from now, Apple will be around and Microsoft will be gone, but Bill Gates will be remembered—and Steve Jobs won’t.

As surprising as it seems, Gladwell might be right. To investigate what shapes a legacy, researchers Scott Allison and Dafna Eylon led a series of studies. They found that when judging leaders, we care as much about their generosity as their accomplishments.

In his time, Andrew Carnegie was best known as a steel tycoon; today, he is remembered more for building a university, a public library, and a music hall. In the same way, the Gates name won’t stand for computers; it will symbolize advancing health, fighting poverty, improving education, and creating access to information technology in the developing world—as well as motivating other billionaires to become philanthropists. Beyond what they achieve, leaders and entrepreneurs are remembered and revered for what they give.

Many great entrepreneurs don’t wait until they’ve succeeded to start giving back; they give right from the start. But for those who don’t begin their careers as givers, there’s still hope. Research shows that the motivation to help others tends to spike around midlife. By that point, we’ve accumulated the expertise, influence, and resources to feel that we can make a meaningful difference. It’s also when we become especially concerned about future generations.

Instead of paying back the people who have helped them, entrepreneurs dedicate their energy to paying it forward to those who aspire to follow in their footsteps. As network experts Wayne Baker and Nat Bulkley found in a new study, people “pay it forward by using a simple rule: ‘What has the group done for me’?” When entrepreneurs are grateful for receiving help in the past, they help younger entrepreneurs by mentoring, making introductions, sharing ideas, and investing. Along with building a legacy, this transforms the communities around them.

Consider Argentina, which is ranked 126 of the 189 countries in the World Bank’s index that measures the ease of doing business. It’s one of the hardest places on earth to start a company, deal with construction permits, register property, afford taxes, and trade across borders. Yet Buenos Aires is one of the most productive hubs of entrepreneurship on the planet, boasting a tech sector that may be the best in all of Spanish-speaking Latin America.

To find out why, Linda Rottenberg, the cofounder and CEO of Endeavor, studied more than 200 entrepreneurs in Argentina. Her team asked tech entrepreneurs who inspired them, invested in them, and mentoring them, and mapped the network. Endeavor’s director of insight, Rhett Morris, sums up the results: “One of the drivers behind the growth of the tech sector in Buenos Aires was that successful entrepreneurs were paying it forward.”

Here’s the network map. Connections are lines; companies are bubbles: 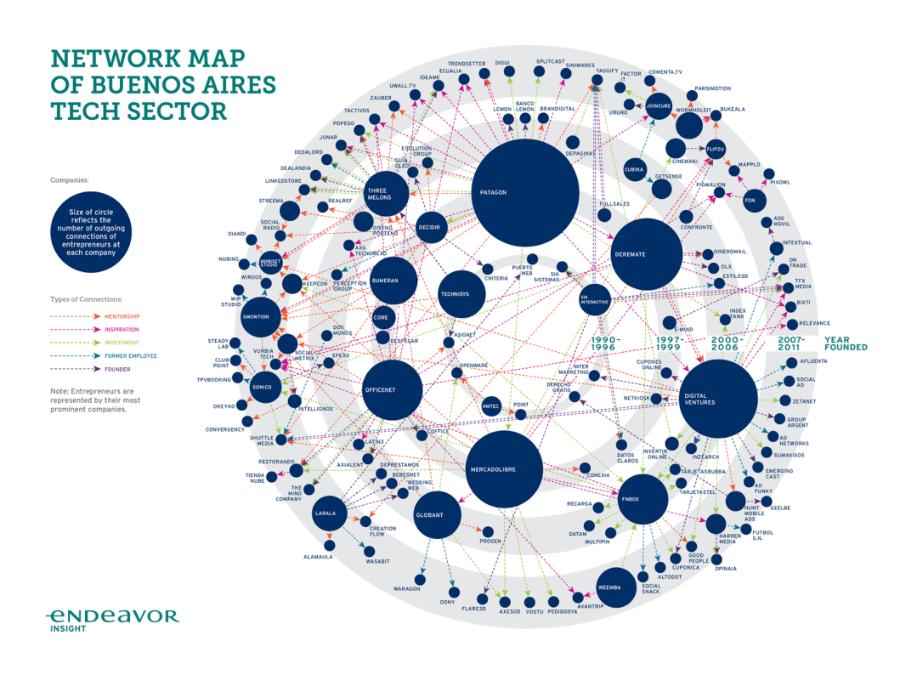 The larger the bubble, the greater the founder’s contributions to entrepreneurship. “What this graphic shows is that most of the companies trace their inspiration—and in some cases their existence—to a handful of more established companies,” explains Rottenberg (whose forthcoming book Crazy is a Compliment is a terrific read on high-impact entrepreneurship). “Fewer than ten entrepreneurs helped spawn a community more than 20 times their size.”

This is the stuff that legacies are made of. And it’s why Bill Gates will be remembered: he has opened doors for many entrepreneurs and individuals to contribute to their own communities.

If Jobs had lived longer, would he have given more? Maybe. Is it possible that he was already a philanthropist but did it anonymously? Maybe. With the limited window that he had, was inventing and perfecting new technologies a more important contribution than giving his time and money away? Maybe.

When 1,000 Argentinian entrepreneurs identified the person who inspired them most, Bill Gates came in third. Steve Jobs was first. But research demonstrates a death positivity bias: our evaluations of great leaders become more favorable when they’re no longer alive. I’m willing to bet that over time, their positions will reverse.