Yes, apple cider vinegar (or ACV) is known to be one of the most helpful healthy tonic. Diluted with some water, ACV can be swallowed easily to treat a number of infections, fevers, or improve digestion. It is also used for a variety of beauty reasons and surprisingly, as a disinfectant too.

Hippocrates was probably the first doctor in the ancient times to use vinegar for its medicinal purposes like disinfecting wounds and research has proven those properties to be true.

Even back then Hippocrates discovered that it had a lot of healing properties and used it when treating wounds. Chinese also used vinegar as to treat ailments as early as 1,200 B.C.

The ancient Babylonians discovered Vinegar at 5,000 BC. And they discovered it by accident!

The French calls it vin aigre which means sour wine. This accidental discovery turned out to be great because it was an extremely versatile product even during the ancient times.

Superfoods are incredible for our health. They are all around us and only because we are unaware of their benefits, we don’t utilise them wholly. Whether it is dry fruits, avocados or apple cider vinegar.

Have your heard the term “an apple a day takes the doctor away”?

After reading this article you may want change that to “an apple cider vinegar a day takes the doctor away”.

This is that one product that you must use, if you are not already. These benefits will surely make you run to your super mart now.

Acid Reflux affects 25 to 40% of the adult population in the United States. One of the symptoms of acid reflux is a burning sensation of the esophagus which is located just behind the heart, hence the term “heartburn”.

There are several factors that trigger this – alcohol, poor diet rich in fatty foods, overeating, being overweight.

Tip: After taking a teaspoon of ACV and a glass of water, do not brush your teeth immediately because ACV being acidic will soften the enamel and the toothbrush will abrade this protective layer. Wait an hour after taking this remedy before brushing your teeth. 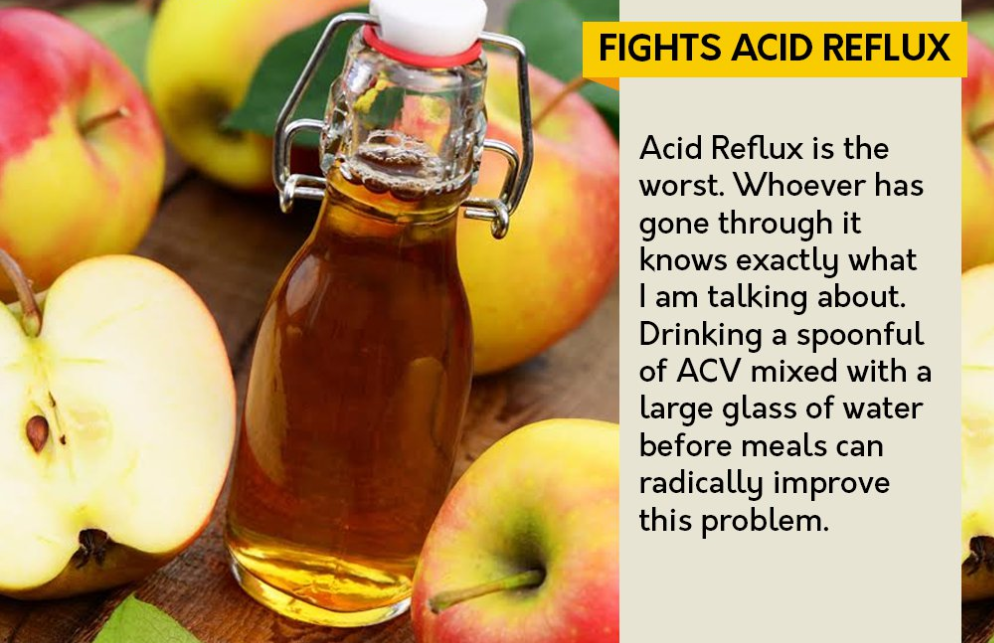 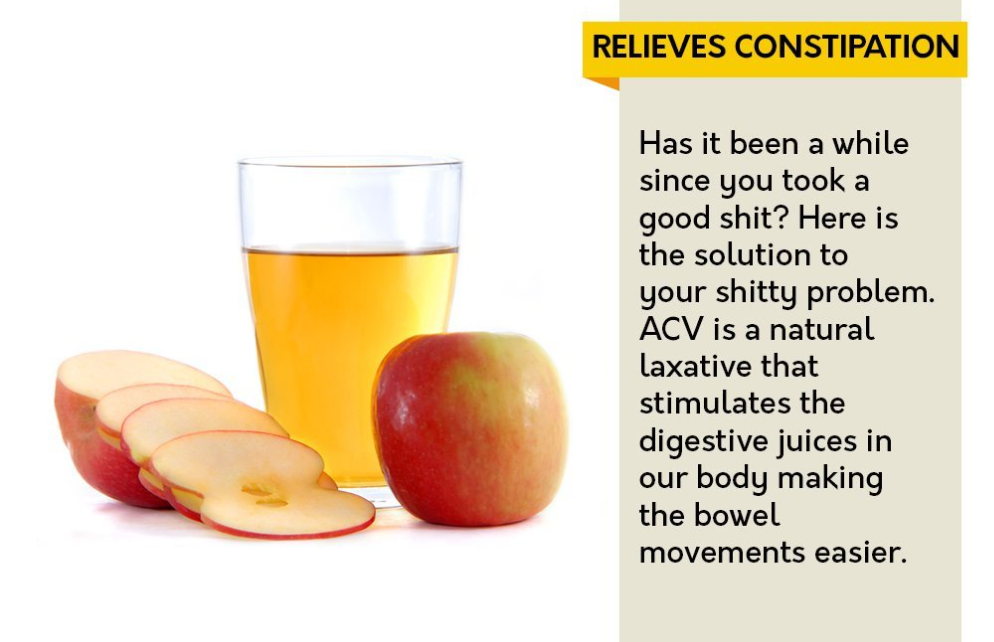 Another reason why natural health supporters like to use ACV is because it has the same pH level as the skin – this helps balance pH and acidic mantle. #4. Detoxes the body & Improves the Gut

The key to a health body is a healthy stomach. It was Hippocrates who said that all “disease begins at the gut”. So it makes sense to take this seriously. 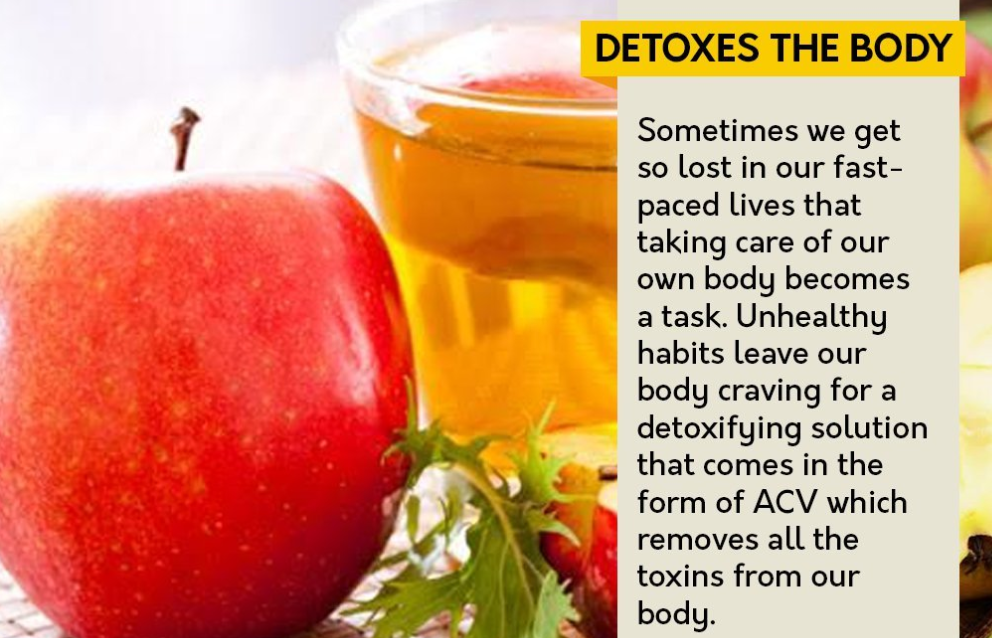 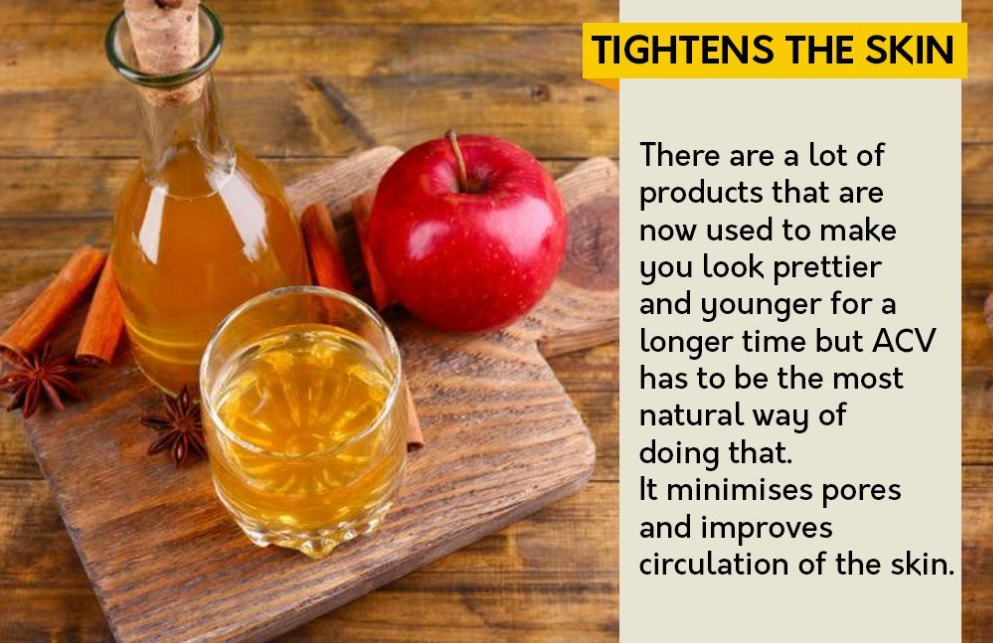 Cancer is a silent killer in that the symptoms don’t manifest itself until it is in a stage where there is little that you can do to cure it.

Research has shown that vinegar can at least shrink and kill some types of cancer cells. 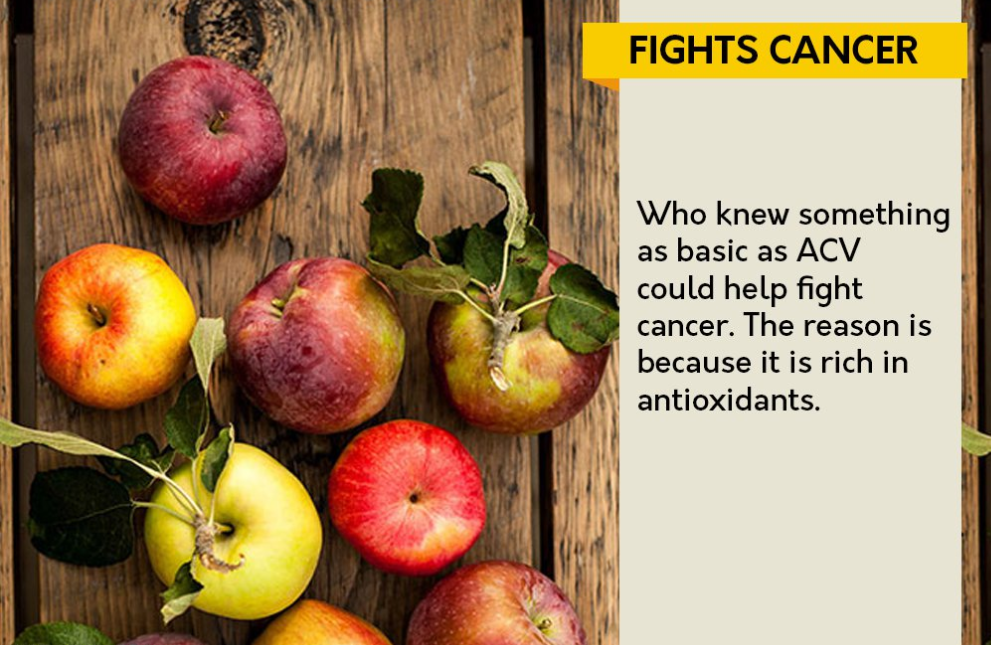 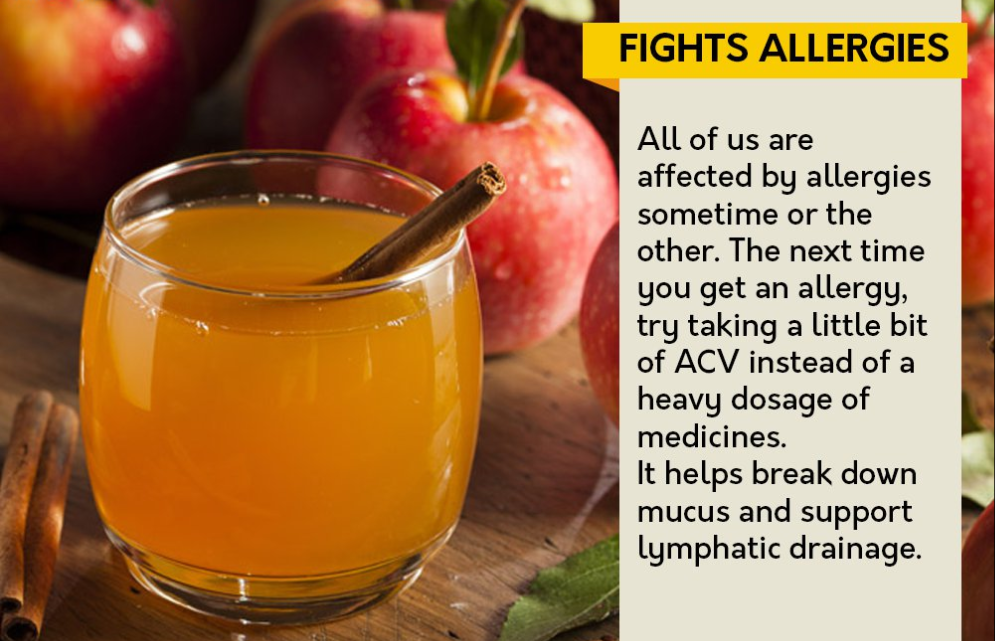 #8. Vinegar Can Help in Losing Weight

Japanese researchers found that acetic acid can prevent the accumulation of body fat.

Two studies were done. One on mice another on people.

The test done on mice (the latest study)

In their study laboratory, scientists fed two groups of mice with a high fat diet. One group were give acetic acid, another group wasn’t. Mice that were given acetic acid had less body fat compared to mice that weren’t give any.

175 obese but health people were divided into two groups. One group took water and the other vinegar along with their diets (they had similar diets). At the end of 12 weeks the people who took vinegar lost an average of 1 to 2 pounds.

While vinegar may have properties that can break down fats, nothing beats exercise and eating the right food. 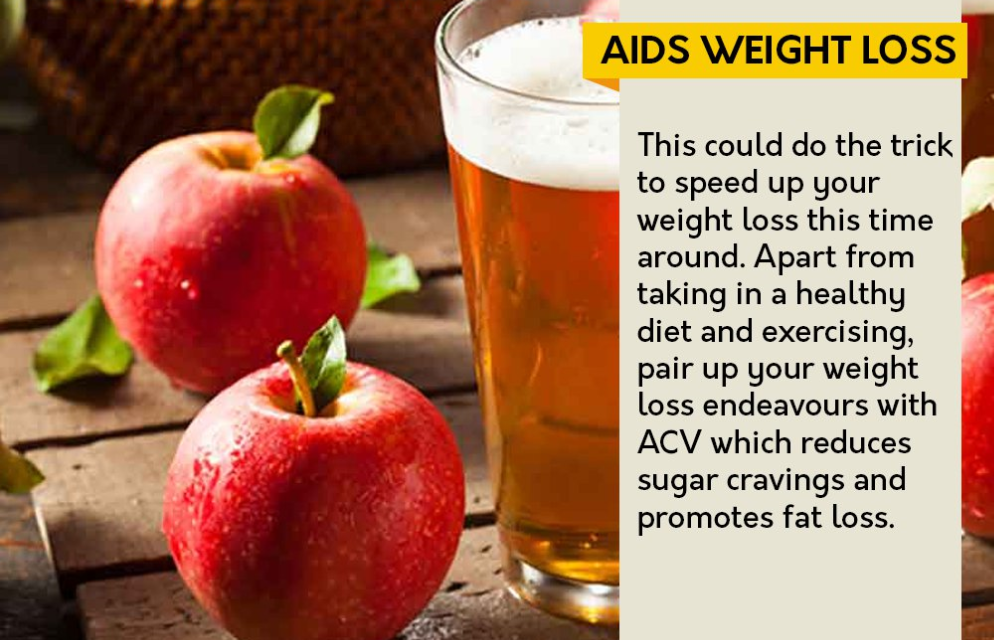 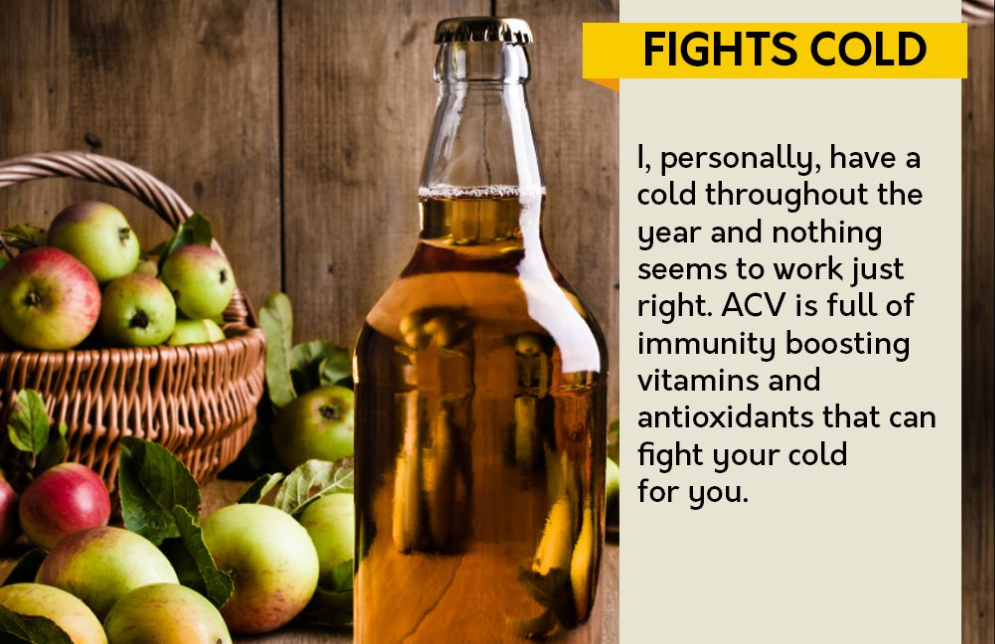 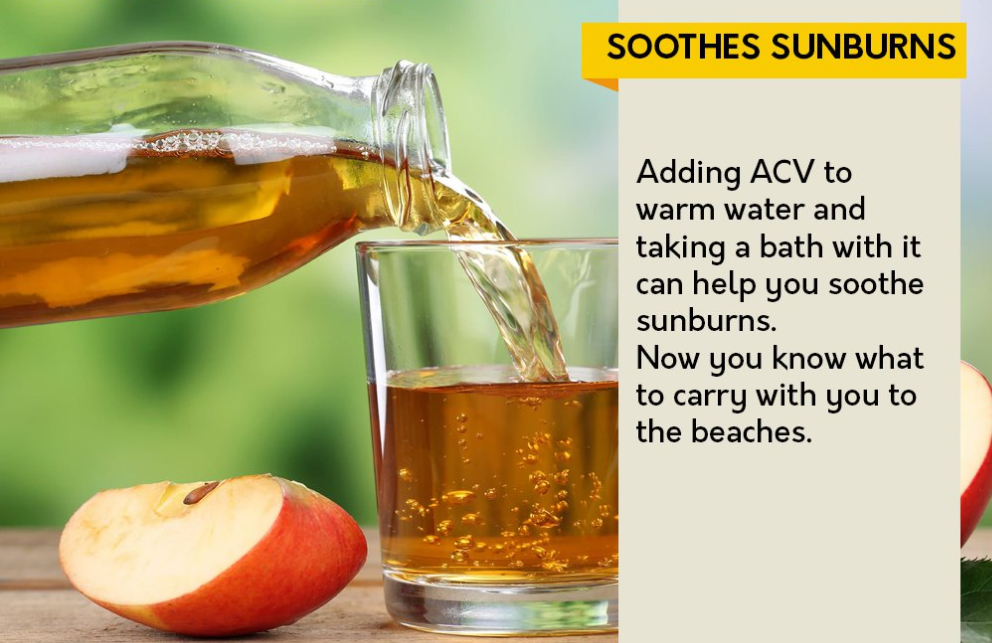 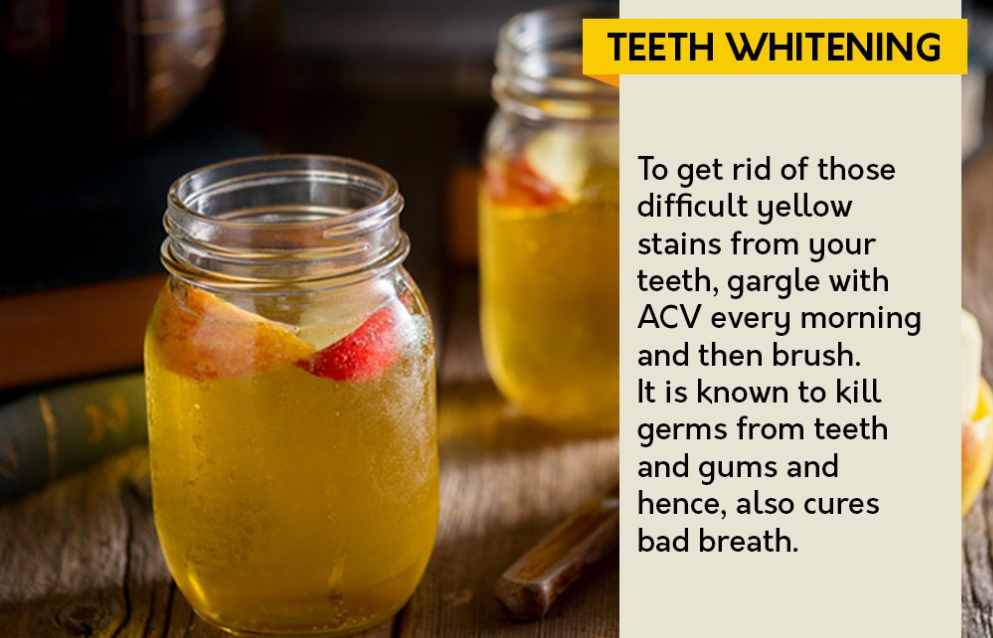 #12. Prevents the onset of Diabetes by lowering Postprandial Glycemia

For those who don’t know postprandial glycemia simply refers to the elevated blood sugar levels that occur after a meal – this is a big factor why pre-diabetics progress to type 2 diabetics.

The term pre diabetes means that an individual has elevated blood glucose levels but not high enough to be considered as type-2 diabetes. If left undiagnosed it can lead to type 2 diabetes in 10 years or less.

Researchers from Arizona University found out that drinking vinegar juice that included 20 grams of apple cider vinegar, 49 grams of water and 1 teaspoon of saccharine after a meal (bagel and orange juice) resulted in a 35% decrease.

Another way to lower down postprandial glycemia is walking around for 15 minutes after a meal instead of sitting down like most of us do.

Acetic acid isn’t vinegar per se rather it is the bacteria in it. It is a by product of the fermentation process. This bacteria is the primary contributor to the other benefits below.

People call it the “mother”. For me it looks like tiny bits of worms floating around the liquid.

There are vinegar manufacturers that remove the “mother” using a filtration process but if you’re thinking of consuming this or adding it to a juice recipe, avoid using distilled vinegar but opt for the raw, unfiltered variety that contains the mother.

Women will go through a lot when prepping for a big party – have their makeup done, fix their hair and put on that nice gown. The after party cleanup is also as tough, they’ll have to remove their makeup and wash their hair.

One great way to remove styling products from your hair is using ACV. This holistic expert recommends diluting a third of a cup of ACV into 4 cups of water then pouring that mixture on your hair after shampooing then rinsing afterwards with cold water. In short this is an all-natural replacement for a conditioner.

If you want to be bolder, try this “no poo” method.

Apple cider vinegar could also helps you to delay your mensuration cycle.

Read also: How to postpone periods? Natural and proven remedies

How to consume apple cider vinegar?

Maybe you will not believe it, but drinking apple cider vinegar before bedtime can significantly improve your health and life in general!

Never drink apple cider vinegar in its purest form, it is highly acidic and can cause the teeth’s enamel to erode. The high acidic nature of ACV can also damage the tissues in your mouth and throat as well as the digestive tract.

Also avoid consuming too much of this as it can also lead to low potassium levels and low bone density.

A straightforward approach in consuming ACV is diluting it in water. Mix in one to two tablespoons of vinegar with a glass of water. You can also add honey for added flavor but I’d recommend drinking it without honey.

Add it to salad dressings

If you eat a lot of salads, adding ACV to your homemade dressings is another great way of integrating this to your diet.

Apple Cider Vinegar Dose – How much should you take?

If you want to consume this as a part your daily health routine there is no hard scientific study on how much is ACV is safe. Bragg (an ACV manufacturer) recommends individuals to take 3 “cocktails” or a mixture of 1 to 2 teaspoons of vinegar along with 1 to 2 teaspoons of raw honey to a glass of distilled water.

You could also add this when making homemade vinaigrettes or as a meat seasoning when cooking Asian dishes.

Maybe you will not believe it, but drinking apple cider vinegar before bedtime can significantly improve your health and life in general!

A Natural Treatment for Itchiness Caused by Bees, Mosquitos and more

It isn’t fun to be bitten by a mosquito or a bee, their stings itches like crazy. If you’re in an unfortunate situation where you are stung by one of these insects there’s apple cider vinegar to the rescue. ACV is effective because it balances the skin’s pH levels and less acidic than other types of vinegars.

A synthetic deodorant works by blocking your sweat glands and preventing it from sweating which is one way our body naturally detoxes. Notice that if you’ve used a deodorant that your armpit feels dry even if you shower.

This debilitating condition that affects over 50 million Americans is painful. My mother has it and she has trouble writing or using her fingers for long periods of time.

There is no scientific research that has been done to prove that vinegar works on arthritis, there have been success stories of people using cider vinegar and feeling better afterwards – from not being able to walk for more than 30 minutes to walking as long as they want.

ACV isn’t rich in calcium per se but one of the ingredients in it, acetic acid can increase the body’s ability to absorb more minerals like calcium This would be beneficial to people (especially women) who are lactose intolerant still get their daily requirements of calcium through other sources like vegetables.

Gets Rid of Warts

A wart is caused when a virus (the human papilloma virus) gets through the topmost protective layer of skin usually through a cut. This nasty skin condition is highly contagious and can grow on any part of the body.

Tip: One effective way of treating this skin condition is using a cotton ball soaked in apple cider vinegar. Apply the soaked cotton on the wart then hold it place with a band aid.