This Wolf Hunting By Mongolian Eagle Is Really Unbelievable

In western Mongolia, an ancient tradition of Hunting Wolves with Eagles is still alive. We know from history that Genghis Khan had 1,000 hunting birds – eagles, falcons and gyrfalcons – and so did Kubla Khan. There were protected areas in the steppe marked with stones where only the khans were allowed to hunt. Hunting wolves with eagles was the “sport of kings”.

The Kazakhs of Mongolia train their eagles to hunt wolves and here the bird of prey is often considered a family member. The Berkutchi is a falconer who hunts with the Golden Eagle. The training of this bird was seen as difficult and even perilous even by the experienced Synchy. The bird is never a slave of its owner, only a partner in hunting. 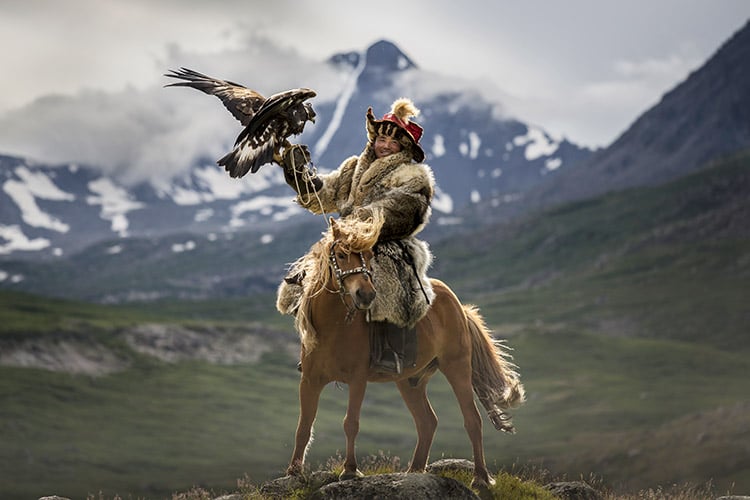 Hunting with birds of prey is impressive, but it’s usually only effective for small game. However, That’s not the case if you have access to Mongolian golden eagles. This video highlights the incredible Mongolian tradition of hunting wolves with a golden eagle. That might sound unbelievable until you realize that golden eagles bred for falconry purposes can have wingspans over nine feet and can weigh over 27 pounds. That impressive size allows them to take down central Asian wolves.

This ancient hunting technique has been used by Mongolians for thousands of years, and Genghis Khan reportedly had over 1,000 hunting birds. That proud tradition is on full display in this video, which features several eagle wolf hunts and traditional Mongolian throat singing.

From ancient times, berkutchi-falconers in the nomadic herder societies had the role of preserving and stocking furs. The high social status of the berkutchi and his family was conditioned by the climate, as warm strong and durable clothing for the people during the winter seasons was a vital necessity. Best-suited for this were the pelts of wolves and foxes.

Berkutchi falconers hunting wolves with eagles Apart from hunting, berkutchi can give spiritual support to pregnant women, who experience or may experience difficulties in childbirth. Through the owner of the bird, which in the imagination of Asian peoples is a symbol of well-being and power. According to folk wisdom, a berkutchi is the indisputable authority in the sphere of childbirth or of renewing fertility. In the cultures of many nomadic and semi-nomadic peoples of Asia, it is said that a berkutchi, regardless of age, can make pregnant a woman who for a long time had not had children. 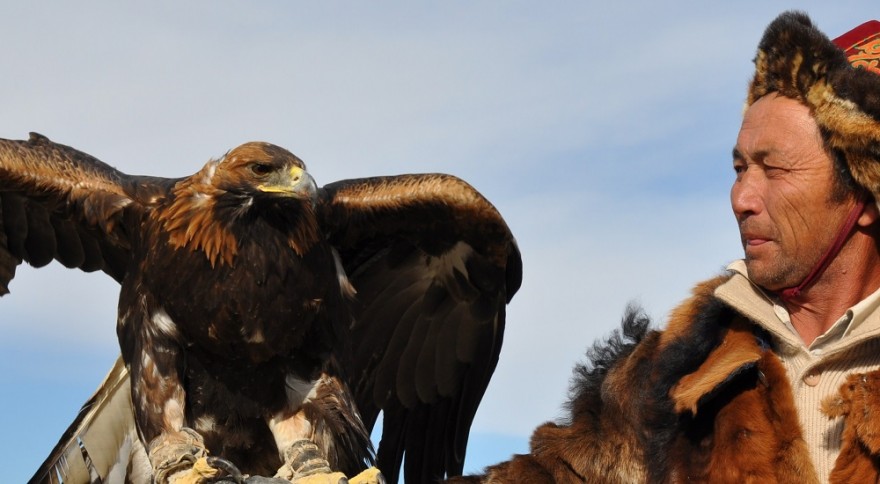 Hunting with eagles – A brief history

Hunting with eagles is a traditional form of falconry found throughout the Eurasian steppe, practiced by Kazakh and Kyrgyz people in contemporary Kazakhstan and Kyrgyzstan, as well as diasporas in Bayan-Ölgii, Mongolia, and Xinjiang, China. Though these Turkic people are most famous for hunting with golden eagles, they have been known to train northern goshawks, peregrine falcons, saker falcons, and more.

In Kazakh, both qusbegi and sayatshy refer to falconers in general. Qusbegi comes from the words qus (“bird”) and bek (“lord”), thus literally translating as “lord of birds.” In Old Turkic, kush begi was a title used for the khan’s most respected advisors, reflecting the valued role of the court falconer. Sayatshy comes from the word sayat (“falconry”) and the suffix -shy, used for professional titles in Turkic languages. The Kazakh word for falconers that hunt with eagles is bürtkitshi, from bürkit (“golden eagle”), while the word for those that use goshawks is qarshyghashy, from qarshygha (“goshawk”).

In Kyrgyz, the general word for falconers is münüshkör. A falconer who specifically hunts with eagles is a bürkütchü, from bürküt (“golden eagle”).

In 1207, the Kyrgyz nomads surrendered to Genghis Khan’s son Jochi. Under Mongol rule, the Kyrgyz preserved their nomadic culture as well as eagle falconry tradition until the 1990s. Archaeologists trace back falconry in Central Asia to the first or second millennium BC.

During the communist period in Kazakhstan, many Kazakhs fled for Mongolia, settling in Bayan-Ölgii Province and bringing with them their tradition of hunting with eagles. There are an estimated 250 eagle hunters in Bayan-Ölgii, which is located in the Altai Mountains of western Mongolian. Their falconry custom involves hunting with golden eagles on horseback, and they primarily hunt red foxes and corsac foxes. They use eagles to hunt foxes and hares during the cold winter months when it is easier to see the gold colored foxes against the snow. Each October, Kazakh eagle hunting customs are displayed at the annual Golden Eagle Festival. Although the Kazakh government has made efforts to lure the practitioners of these Kazakh traditions back to Kazakhstan, most Kazakhs have remained in Mongolia.

What do you think About mongolian hunters ? Wanna Try some Eagles ?
We want to hear from you ! Share your comments below.

Is it possible to make a drift-choreography in a rotary traffic? BMW took some hollywood stunt driver and added the same amount of BMW M235i...
Read more

We took you back in time with our list of 90s unforgettable wrestlers, but we bet you loved nothing more than those divas. Yeah,...
Read more

Bollywood’s mainstream actress Radhika Apte, who is known for her intensive roles, has recently done a hot photoshoot for the upcoming edition of GQ...
Read more

The Israeli American Council held a community-wide rally in support of Israel on Miami Beach on Sunday July 24, 2014.   Wrapping Israeli flags around their...
Read more