Newly developed "smart glass" technology that mimics the shutter capabilities of a traditional camera could improve the pictures you snap on your smartphone. Researchers in Germany have developed a camera component for smartphones that helps adjust light, exposure and focus.

Traditional cameras have what photographers refer to as an aperture — overlapping blades around the inside of a lens that move mechanically to change the size and focus of the lens. The aperture is sometimes referred to as an "iris." Much like the iris of the human eye, it controls how much light enters the mechanism, which affects the image that is eventually produced. When it comes to cameras, the amount of light that touches the camera's sensors affect the overall focus of the picture you take.

"The [smartphone] cameras would benefit from an iris, because it allows [the camera] to change the depth of focus, which is not possible right now, and would further close the gap in functionality between smartphone cameras and conventional digital cameras," Deutschmann told Live Science. "In addition it would be an option to create larger optics for the smartphones to increase the picture quality in bad light situations, like at night, while the iris would decrease the amount of light that reaches the sensor in bright environments." 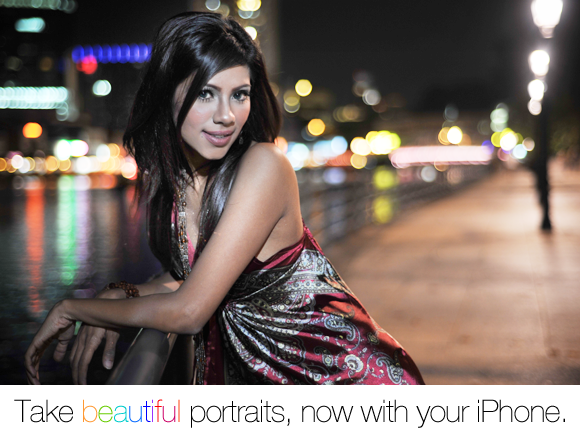 Deutschmann and his colleagues developed a mechanism to make up for the need for better focus — a "micro-iris." The thin device, made of electrochromic material sometimes referred to as "smart glass," can be placed on the smartphone camera lens. Electrochromic material controls how much light passes through itself by changing its transparency in response to light or heat. Smart glass has been used in sunroofs, windows and skylights, and the material changes in opacity from transparent to translucent when heated or when voltage is applied to it.

But in smartphone cameras, the smart glass in the micro-iris could function as an aperture — it can adjust how much light enters the camera, preventing too much exposure and helping to focus the image. The micro-iris is also incredibly low-powered, requiring only 1.5 volts of electricity, which means handheld smartphones are well-suited to handle it, the researchers said.

Deutschmann said the smart glass is still in its early stages of development, which means the idea works in principle but isn’t quite ready for commercial products just yet. Future research will look at how well electrochromic materials can control camera focus — an important parameter that will determine whether smart glass will be a key feature for next-generation smartphones.

The study was published June 19 in the Journal of Optics.

Meow Meow Mumbai: You Have Got Mephedrone As...

Costa Rica booked their place in the round of 16 with a 1-0 victory over Italy as they became the first side to qualify...
Read more

Photographer Suciu Cristian captured the unique beauty of Transylvania. Photography challenged him, made him expand his boundaries. It triggered his wish to show his...
Read more

The movie 2 States and 3 Idiots were big bollywood hits and both were based on Chetan Bhagat's books "2 States" and "5 Point...
Read more

This guy is walking around with a sign, blatantly saying "Kiss me" and see what happen next.   Some YouTube Comments: "can someone tell me, why i'm...
Read more