We can not imagine life without Sun. Sun is important in providing solar energy not to the outer world but to our inside body. Lets learn how to use this natural resource to make our life healthier and beautiful. One of the best way is doing Sun salutation.

Sun Salutation is an ancient technique also known as Surya Namskar. It is considered a complete body workout.It is a set of 12 yoga poses (288 yoga poses within 12 to 15 minutes) which bring your body, breath and mind together. When performed in the morning, it revitalizes your body and refreshes your mind, leaves you feeling energetic throughout the course of the day.

Regular practice of Sun Salutation improves the functions of the heart, liver, intestine, stomach, chest, throat, and legs – basically, the whole body. The process purifies the blood and improves blood circulation throughout the system and ensures proper functioning of the stomach, bowel, and nerve centers.

People who are overweight or obese have tried many ways to lose a lot of weight fast. Surya Namskar or Sun Salutation is one the best way to burn your calories faster. Here are comparison made with the most popular calories burning exercises.

Now this comparison could give an idea that for Healthier, Efficiencies & Long life Surya Namskar (Sun Salutation) is on of the best exercise to perform.

1. It reduces obesity and gives long and healthy life.

2. It improves strength of body by strengthening the neck, shoulders, arms and wrists.

3. It will help you to look and feel younger.

5. It improves skin health by enabling it to eradicate toxic impurities through profuse respiration and to absorb vital energy from the atmosphere.

6. It gives long and healthy hair. It reduces falling of hair and its tendency to grayness and prevents baldness by increasing nutrition to the hair and scalp. It boosts blood circulation to the scalp.

7. It improves health and functionality of heart and will cure and prevent blood pressure, palpitation.

8. It improves health and functionality of liver and lungs, gives you wind and prevents tuberculosis.

9. It improves health and functionality of intestine and stomach.

10.It improves health and functionality of chest and breast.

11. It improves health and functionality of knees and legs.

12.It helps in reducing labor pain.All discomforts from menopause vanish.

13.It improves the uterus (womb) and ovaries removes menstrual disorders such all dysmenorrhea and consequent pain and misery.

14.It helps control the pituitary and adrenal glands, which in turn ensure regularity of the menstrual cycle and reduce pain during menstruation.

15.It destroys the offensive odor of perspiration.

16. It improves knock-knees in walking.

17. It helps in increasing height of the body.

18.It helps in strengthening your immune system.

19. It takes you step by step quickly, easily, surely, from your present condition to the very height of physical perfection.

20. It will help you to boost your confidence.

21.It will generate optimistic positive thoughts in you.

22.It will keep you away from sins, for it is the proud act of wellness and disease.

23. It helps in reducing thyroid problem.

25.It increases size of plexus(also know as second brain of the human body), expansion of plexus helps us develop our intuitive ability.

Surya Namaskar is an ancient technique to reduce weight and give long and healthy life bu performing this technique on daily basis 10-12 times for 15-20 min. Lets learn how to practice all the 12 poses of Sun Salutation.First and foremost keep a small carpet or a small piece of cloth to stand on it. But it should be clean and kept safely after the entire activity is over. If you are performing outside of home try to choose cleaner and peaceful place, now start practicing all 12 poses.

Pose 1# Prayer pose (Pranamasana) : Stand in an erect position. Join your hands and keep them against your chest. Concentrate on standing straight, steady and in a meditative mood. This posture helps to induce a state of introversion, relaxation and calmness. 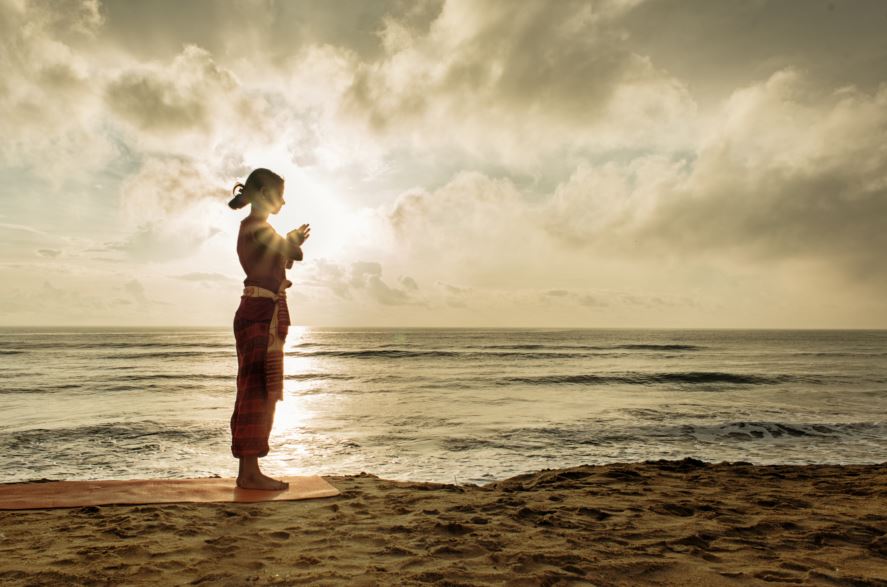 Pose 2# Raised arms pose (Hasta Uttanasana): Take a deep breathe in and raise your arms upwards. Arch your body backwards while face the sky.Stretches the chest and the abdomen and lifts the prana (energy) upwards to the upper parts of the body. Breathing: Start inhaling as you stretch both arms, and hold breath (kumbhaka) in the stretched arm position. 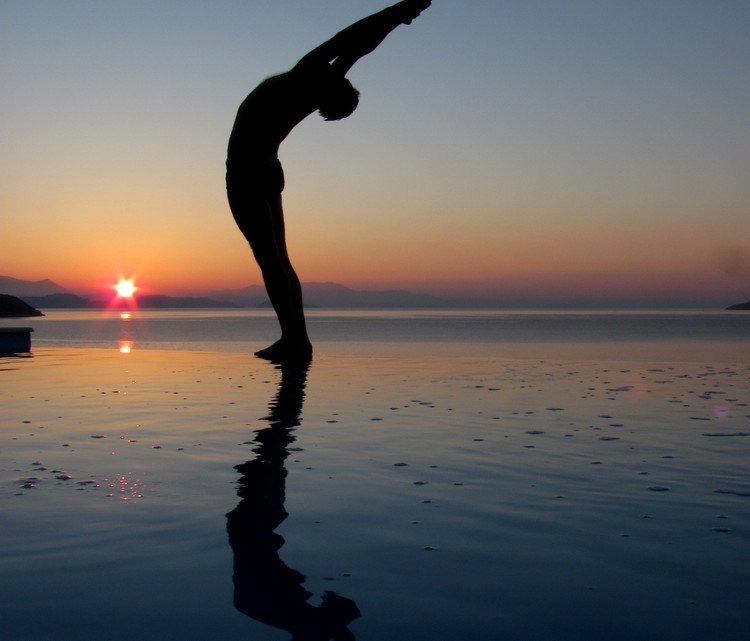 Pose 3# Hand to foot pose (Pada Hastasana) : Bend the body forward and down, keeping the spine straight. Avoid collapsing the chest or over-rounding the upper back. Keep the legs straight and perpendicular to the ground. The knees may be allowed to bend a little, if needed. This posture massages the abdominal organs. The power of digestion increases and female disorders such as menstrual irregularities are relieved. 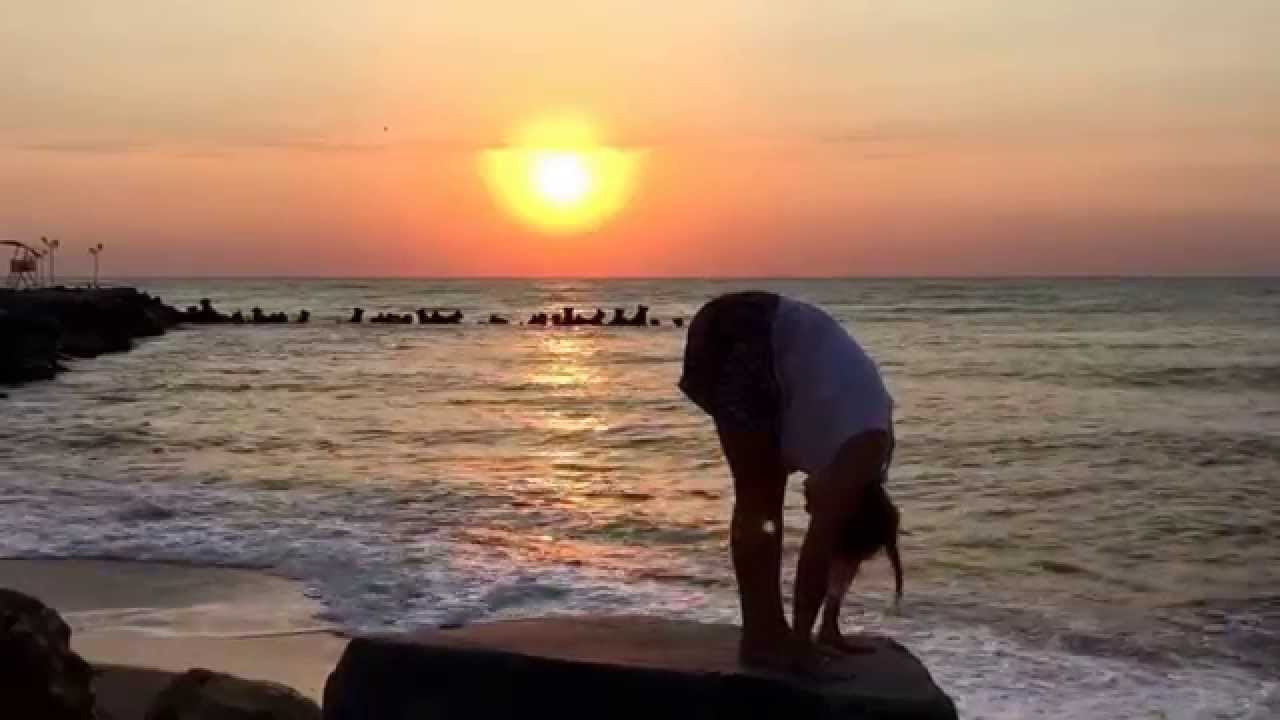 Pose 4# Equestrian pose (Ashwa Sanchalanasana) :  Push your right leg back, as far back as possible. Bring the right knee to the floor between the palms and lift the spine and expand the chest. Look straight and concentrate at the centre of body. 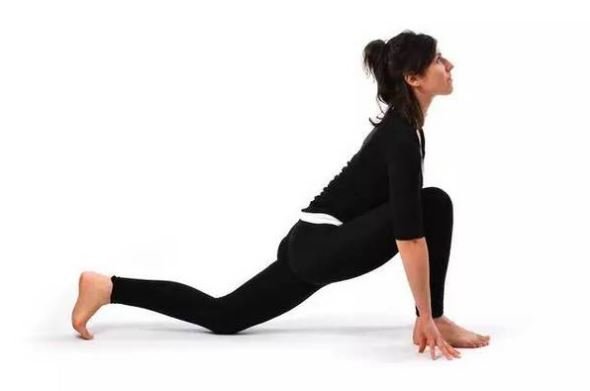 Pose 5# Stick pose (Dandasana) : Breathe out and release your left leg and keep it parallel to the right leg. The position of palm remains unchanged. 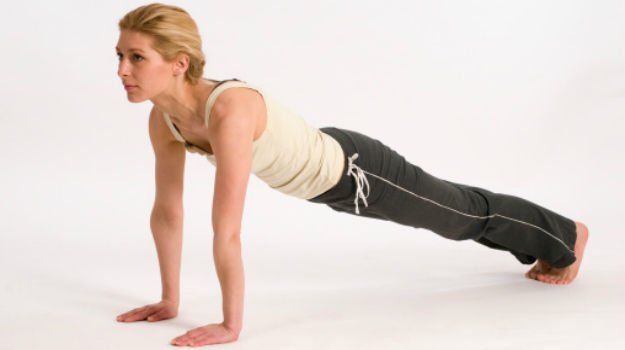 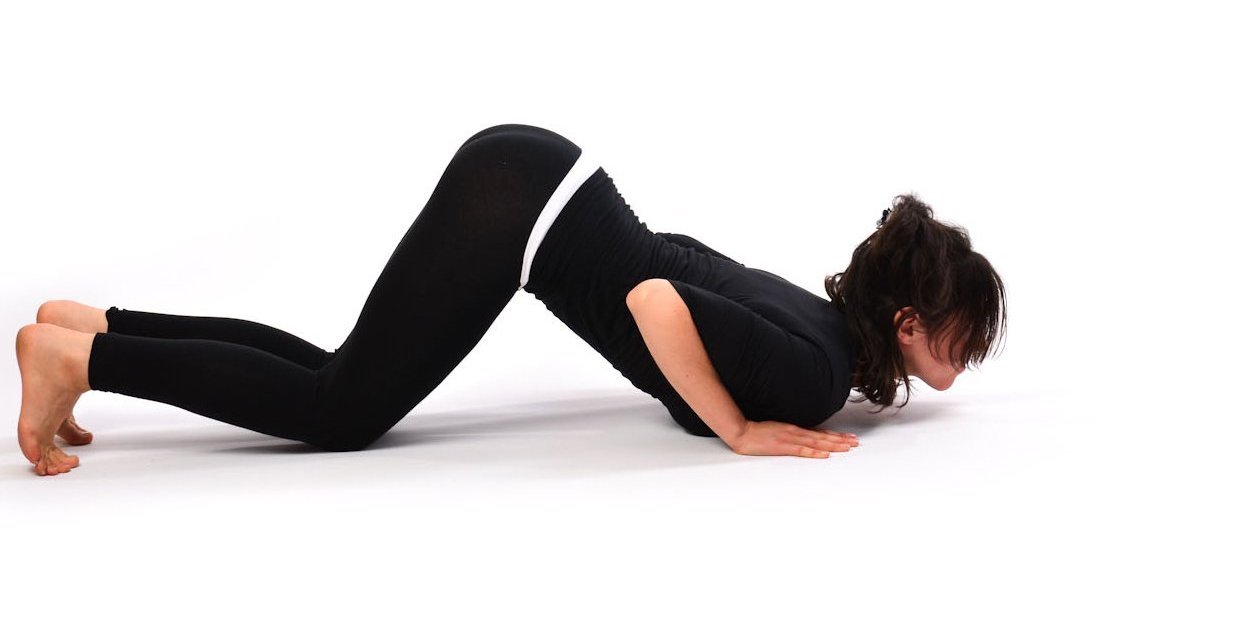 Pose 7# Cobra pose (Bhujangasana) : Slide forward and raise the chest up into the Cobra posture.You may keep your elbows bent in this pose, the shoulders away from the ears. Look up straight.

Pose 8# Mountain pose (Parvatasana) : Lift the hips and the tail bone up, chest downwards in an inverted “V” posture.Keep the heels on the ground and make a gentle effort to lift the tailbone up, going deeper into the stretch. 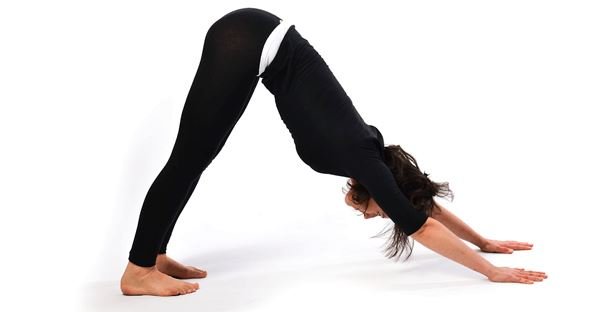 Pose 10# Hand to foot pose (Hasta Padasana) : Bring the left foot forward. Keep the palms on the floor. You may bend the knees, if necessary.Gently straighten the knees and if you can, try and touch your nose to the knees. Keep breathing.

Pose 11# Raised arms pose (Hasta Uttanasana) : Repeat this step again, roll the spine up, hands go up and bend backwards a little bit, pushing the hips slightly outward.Ensure that your biceps are beside your ears. The idea is to stretch up more rather than stretch backwards.

Pose 12# Prayer pose (Pranamasana) : Stand in an erect position. Join your hands and keep them against your chest. You can perform Tadasana at last step, in this first straighten the body, then bring the arms down. Relax in this position, observe the sensations in your body. 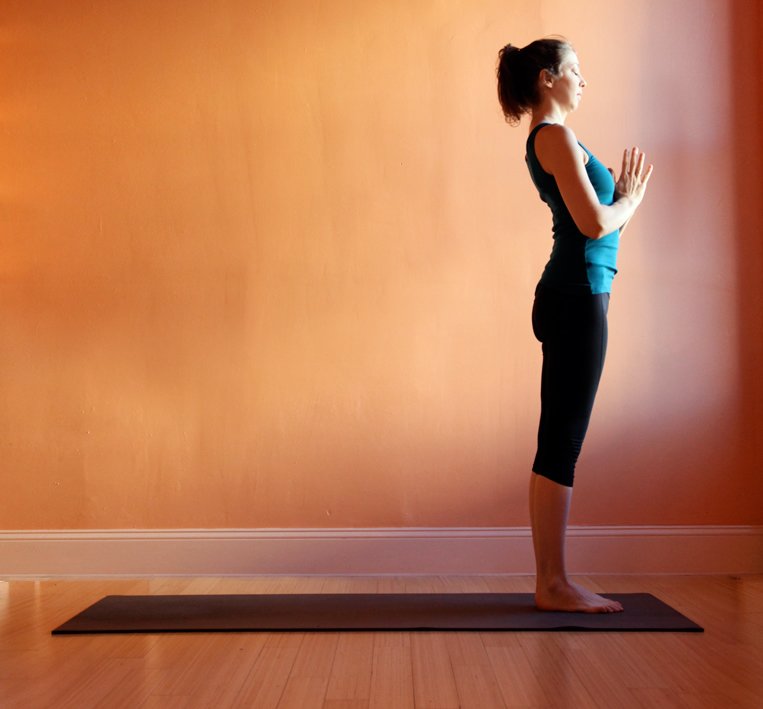 We know now how important it is to include Surya Namaskar in our daily routine. Lets talk about its origin, this technique is used in by Indian saints since ages. Now it is popular worldwide.

There’s some disagreement among authorities over the origins of Sun Salutation. Traditionalists contend that the sequence is at least 2,500 years old (perhaps even several hundred years older), that it originated during Vedic times as a ritual prostration to the dawn, replete with mantras, offerings of flowers and rice, and libations of water. Skeptics of this dating maintain that Sun Salutation was invented by the raja of Aundh (a former state in India, now part of Maharashtra state) in the early 20th century, then disseminated to the West in the 1920s or 1930s.

Some scholars attribute modern Surya namaskar practice to Tirumalai Krishnamacharya teachings. It includes modern day Ashtanga Vinyasa Yoga and the Visesha Vinyasa Sun Salutation subroutine from Vinyasa Krama Yoga, as well as a host of other popular forms of yoga.

In his work The Yoga Body, Mark Singleton states Sūryanamaskāra may have been invented by Patinidhi Pant, the Rajah of Aundh. He adds that there is no evidence that the Sūryanamaskāra sequence was practiced prior to the early 20th century. According to Alter, while Pant Pratinidhi of Aundh called the warm up routine as surya namaskar, how exactly Sūrya Namaskāra came to be included in the yogic practices of Hatha and Ashtanga Yoga in India remains unclear.

However old Sun Salutation is, and whatever it may originally have looked like, many variations have evolved over the years. Janita Stenhouse, in Sun Yoga: The Book of Surya Namaskar, illustrates two dozen or so adaptations (though several are quite similar). Our sequence here consists of 12 “stations” composed of eight different postures, the last four being the same as the first four but performed in reverse order. In this sequence, we’ll start and end in Tadasana.