Costa Rica offers some of the finest and most varied wildlife viewing on the planet.  This rain forest-cloaked Central American country is home to more than 500,000 different species that is about 4 percent of all plant, insect and wildlife species on Earth.

Costa Rica is a small Central American country with a coastline on either side, the Pacific to the west, and the Caribbean to the east, with a ribbon of mountains and volcanoes down the middle. A country that has escaped the political upheavals of its regional neighbors, Costa Rica positively glows with pride. Education, including at the university level, and health care is free to all, funded by the dismantling of the military post-Second World War, and the country has a stated goal of achieving carbon neutrality by 2021.

If you’re planning a trip, make sure to look out for some of these weird and exotic animals: 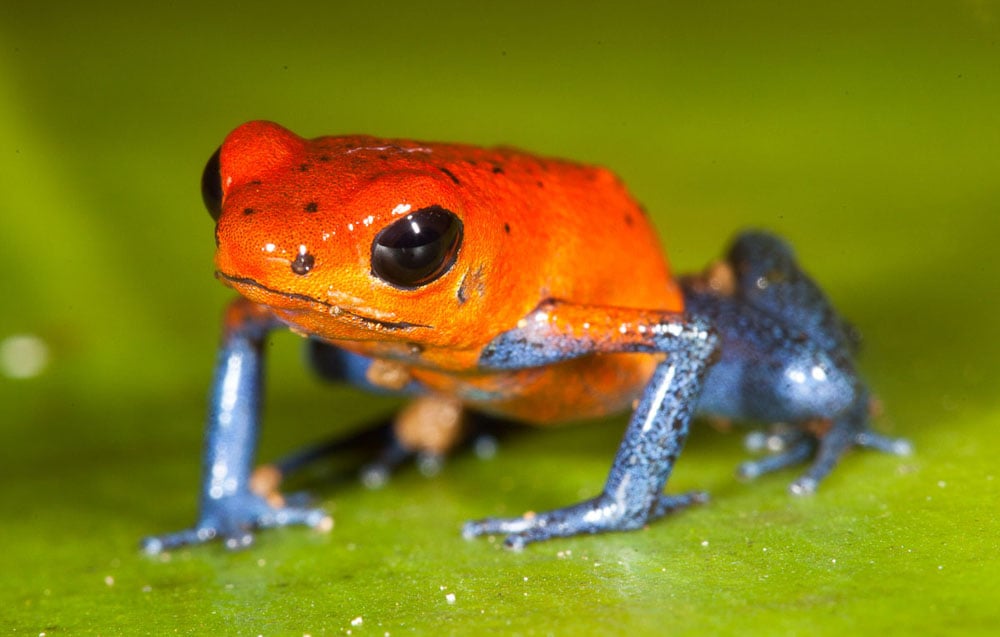 The strawberry poison dart frog is a unique creature for many reasons but in particular, because of its ability to morph. It can change from red bodied with blue legs to green with black spots to navy blue. These frogs, found all throughout Central America and Puerto Rico, are only toxic in the wild, creating its poisonous defenses from natural elements found in the jungle. Once domesticated, a diet of fruit flies and store-bought goodies doesn’t quite do the trick. Despite their small size, strawberry poison dart frogs have been quite a successful species and are in no danger of becoming extinct. 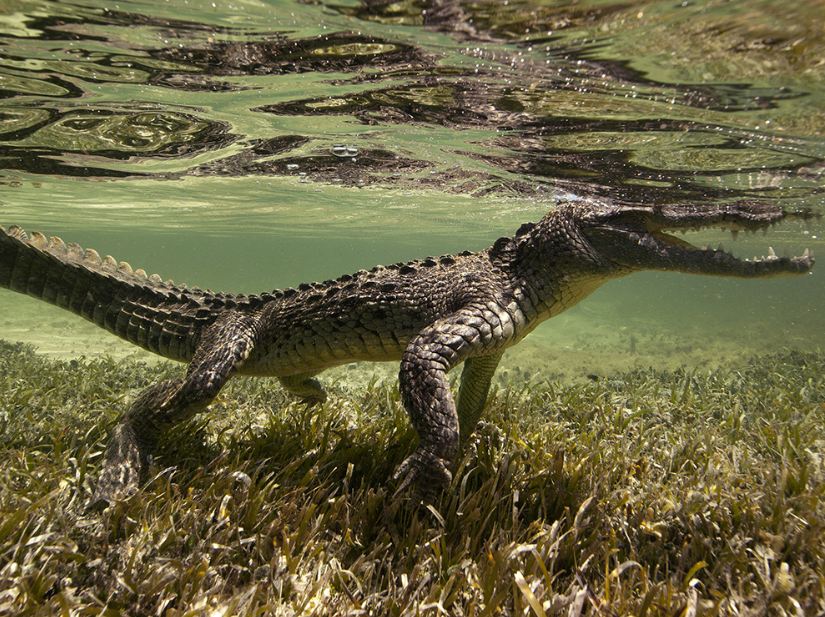 The American crocodile, found in southern Florida and all the way down to Ecuador is well populated in Costa Rica. The average crocodile is 10 to 13 ft. long, but in Costa Rica they measure about 13 to 16 ft. long. They can often be seen congregating by bridges where unenlightened tourists toss them food for photos. This species is currently threatened and now only about 1,500 American Crocodiles live in Mexico, Central and South America. The biggest threat to their existence is loss of habitat. 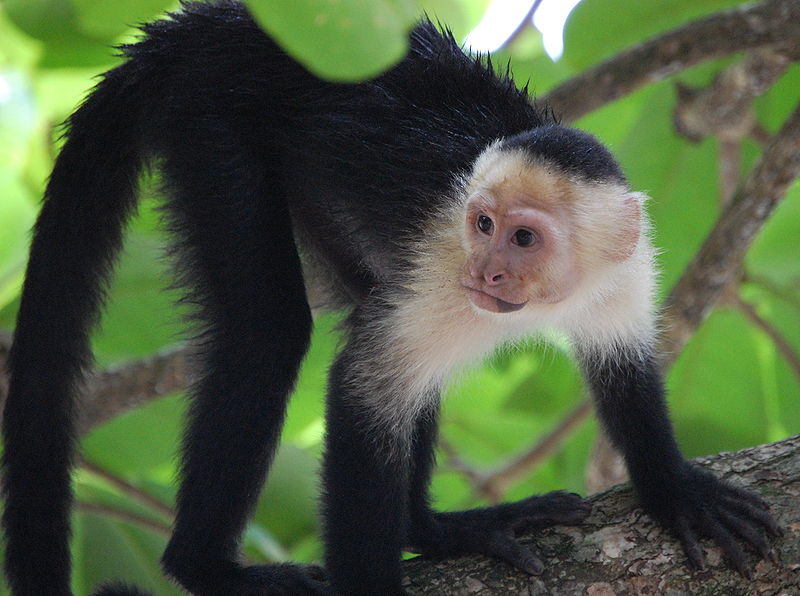 Quite the clever animal, white headed capuchin monkeys are known to use tools as weapons and as a means of getting food. They also will rub plants over themselves for what appears to be herbal medicinal use. This could be one of the reasons for their long life and high population. These monkeys hang out in groups of up to 40 monkeys and can live to be over 54 years old. They are found in southern Central America, Columbia and Northwestern Ecuador. In Costa Rica, the intelligent primates are easy to enjoy as they are among the most commonly seen animals in the National Parks. 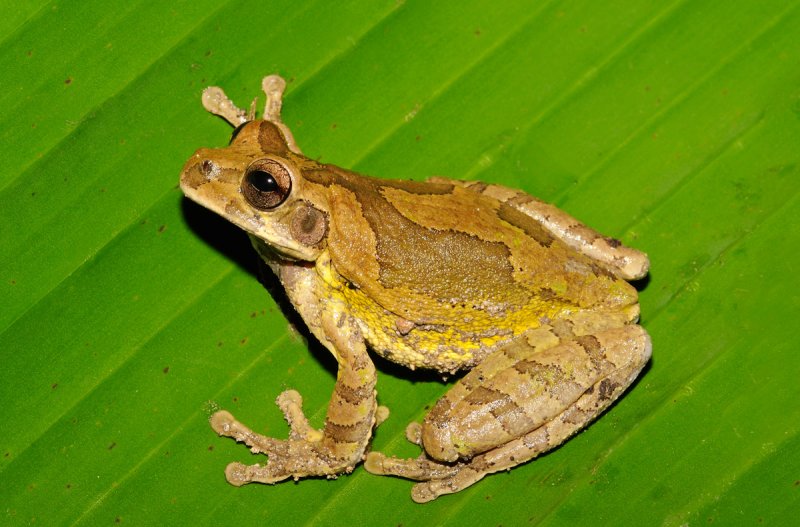 Tree frogs account for about one third of the frogs in Costa Rica.  This tree frog in particular (Smilisca baudinii) is unique because of the sound it makes. It sends out a loud series of deep honks that might make you think you had crossed paths with a clown. Mexican tree frogs can be found in parts of the southwestern U.S. and down to Costa Rica. They are in no danger of becoming extinct but there is no known data as to their actual population count. 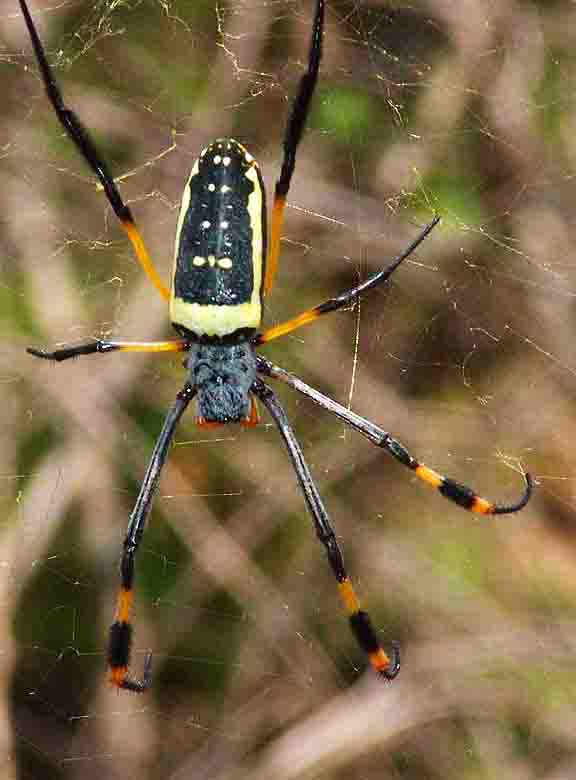 The golden orb weaver is an amazing spider. The spider spins gold silk to attract bees and to blend in with the foliage. Extremely strong, the spiders’ webs have even been known to catch small birds. There has been promising research to suggest that the silk could be used for engineering nerve regrowth. The golden orb weaver is also the oldest surviving spider species, with a fossilized specimen found that dates back to 165 million years ago. Existing in most warm parts of the world, these creepy looking spiders are quite venomous (it hurts but you’ll live), but aren’t aggressive toward humans. 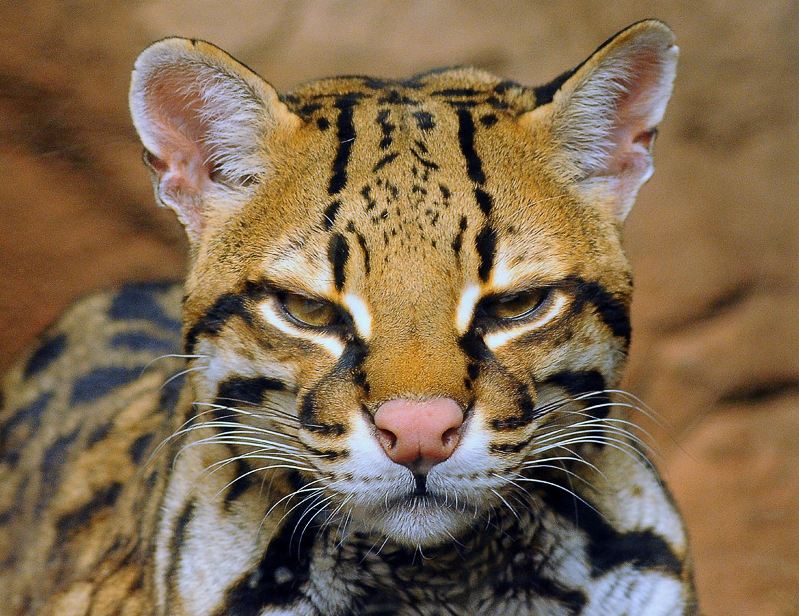 Ocelots are nocturnal cats and are about twice the size of a normal house cat. They can be found in every country south of the U.S., except Chile. They range in length from 38 to 60 inches long but only weigh 20 to 35 pounds. Their light weight and massive feet make them excellent tree climbers. Once listed as vulnerable due to hunting (mostly for their fur), ocelots have had a resurgence and are now not considered a threatened species. However a serious threat comes from the commercial development of its habitat. 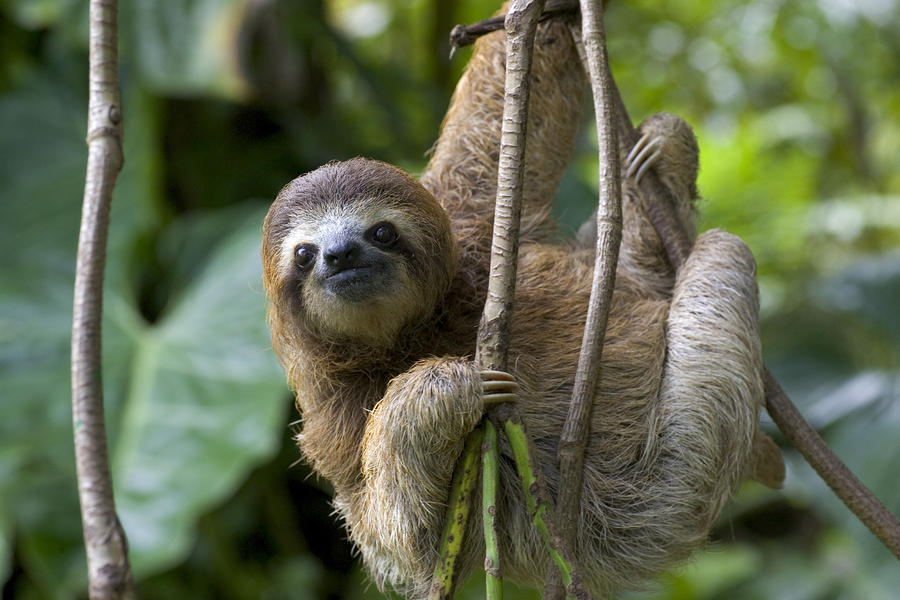 Sloths are among the more unique animals in the world. Known for being incredibly slow, three-toed sloths sleep 16 to 18 hours each day and live high in the jungle canopy, coming down only once a week or so to go to the bathroom. While they walk and move along trees very slowly they are actually strong swimmers. When in the trees they do not travel very far usually staying in their home range of about 12 acres and will even spend about 20 percent of its time in one tree. While sloths will actually fight for their territory using their long claws, females will give up their territory to their young after caring for them for their first nine months. 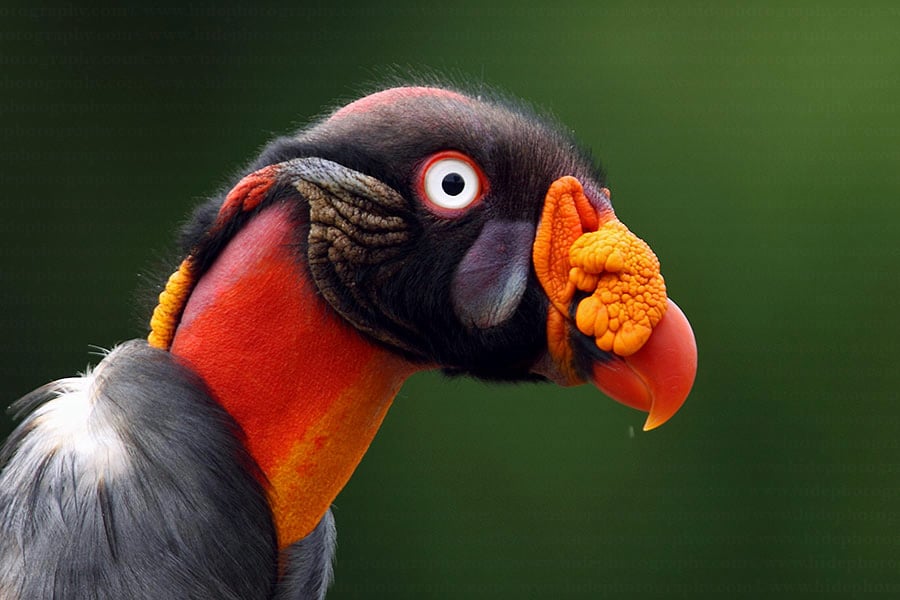 The king vulture is the last remaining member of its genus. They are strong scavengers and will usually be the first to arrive at a fresh kill. Other than its distant cousins, Andean and California Condors, it is the biggest of all vultures. Its length ranges from 27 to 32 inches and its wing span can be up to 6 feet 6 inches wide. These birds are spread out from Southern Mexico all the way to Northern Argentina. With somewhere between 10,000 and 100,000 individuals in the wild, the king vulture is a healthy species with its only threat coming from loss of habitat. 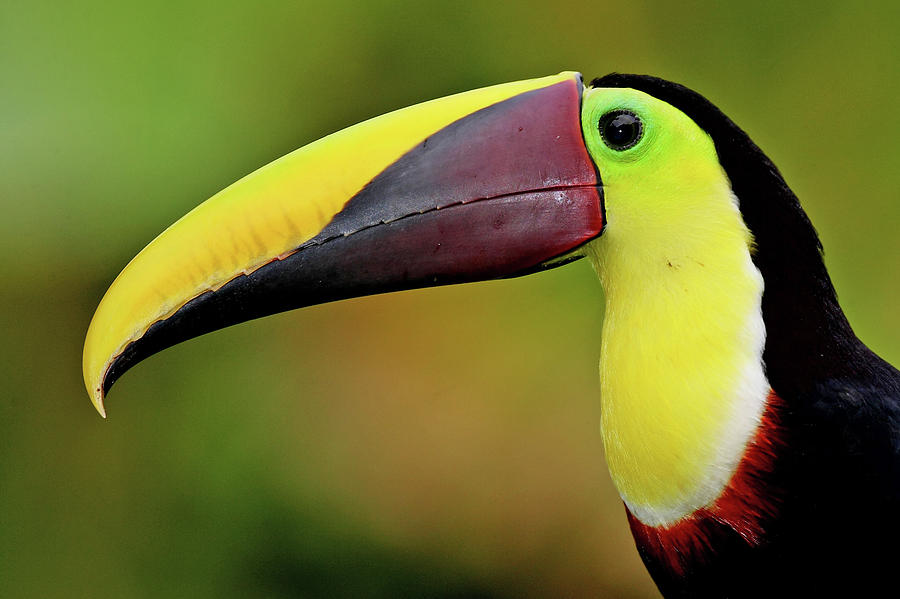 If you are walking through the Costa Rican rainforest and hear “yo-YIP, a-yip, a-yip” you are likely eavesdropping on this big-beaked bird telling its friends to follow him. The chestnut-mandibled toucan is the biggest toucan in Central America and is a prominent member of the habitat. Despite the big bill, toucans mostly eat fruit though will make do with insects and small snakes when the opportunity presents itself. These toucans live between Eastern Honduras and Northern Colombia. In Costa Rica, you will find them in the wet forest lowlands of the Caribbean and on the Pacific side along the Cordillera de Talamanca up to Carara. 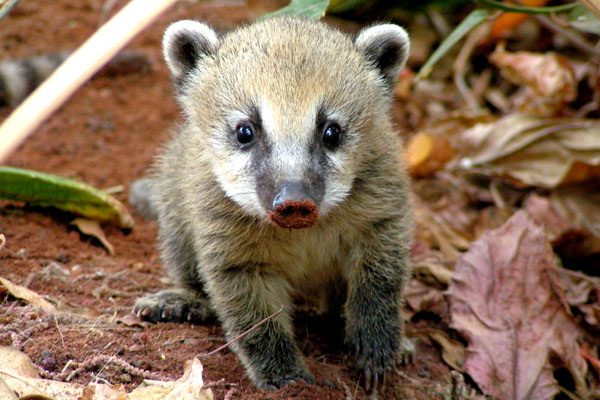 This long-nosed brother of the raccoon is also known as the “Snookum Bear.” Coatis are widespread and can be found as far north as Southern Arizona and stretch down into Northern Argentina. Though not aggressive when provoked or when defending itself, these creatures can be fierce fighters. They have strong jaws, sharp teeth and can swipe quickly with their paws. There is little data on this animal regarding its population. Hunting them is still unregulated and while, like most animals, it suffers from loss of habitat, they are listed as being un-threatened.

About Author: Dan Austin is the owner and director of Austin Adventures, a travel company specializing in guided adventure tours.

Hope you like the article share this with other social media platforms and let all come to know about these weird but interesting animals of Costa Rica.

Amazing facts about Animals that you probably you don’t know

How does animals look in the womb | Ultimate Pictures

10 Crazy bridges made for animals for crossing

11 Giant creatures around the world

A father and daughter filmed aged two years after he noticed that only shaved a considerable portion of the hair . The movie was hilarious...
Read more

This video is absolutely catchy!  this is soooo funny, but theres something oddly sweet about it at the same time lol﻿..   http://www.youtube.com/watch?v=Cvfvn27Akxk Credit : Bhim Niroula Source:...
Read more

More and more, English is a global language; speaking it is perceived as a sign of being modern. But -- what do we lose...
Read more