Magnus Wennman, an award-winning photo journalist from Stockholm, has published a Heartbreaking photo series revealing what is happening to the children in the Middle East and on Europe’s doorstep as they flee the conflict in Syria. To create “Where The Children Sleep,” he traveled throughout the regions where these children and their families are fleeing to to tell us their stories.

In an interview with CNN, Wennman, who took the photos for the Swedish newspaper Aftonbladet, said that the conflict and the crisis can be difficult for people to understand, “but there is nothing hard to understand about how children need a safe place to sleep. That is easy to understand,” he said“They have lost some hope,” Wennman added. “It takes very much for a child to stop being a child and to stop having fun, even in really bad places.” 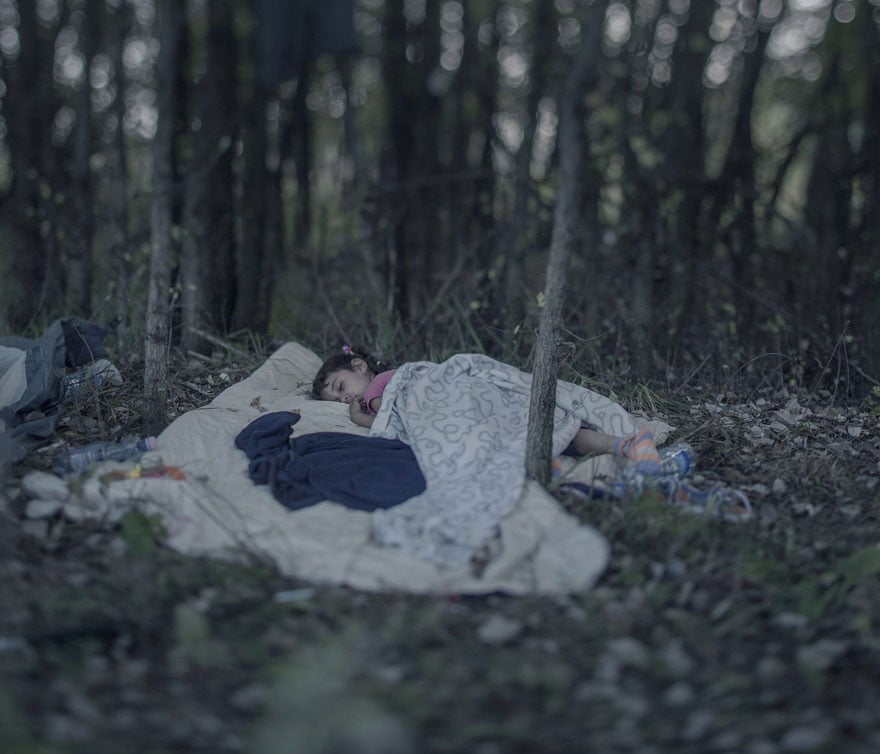 Back home in Baghdad, the dolls, the toy train, and the ball are left; Lamar often talks about these items when home is mentioned. The bomb changed everything. The family was on its way to buy food when it was dropped close to their house. It was not possible to live there anymore, says Lamar’s grandmother, Sara. After two attempts to cross the sea from Turkey in a small, rubber boat, they succeeded in coming here to Hungary’s closed border. Now Lamar sleeps on a blanket in the forest, scared, frozen, and sad. 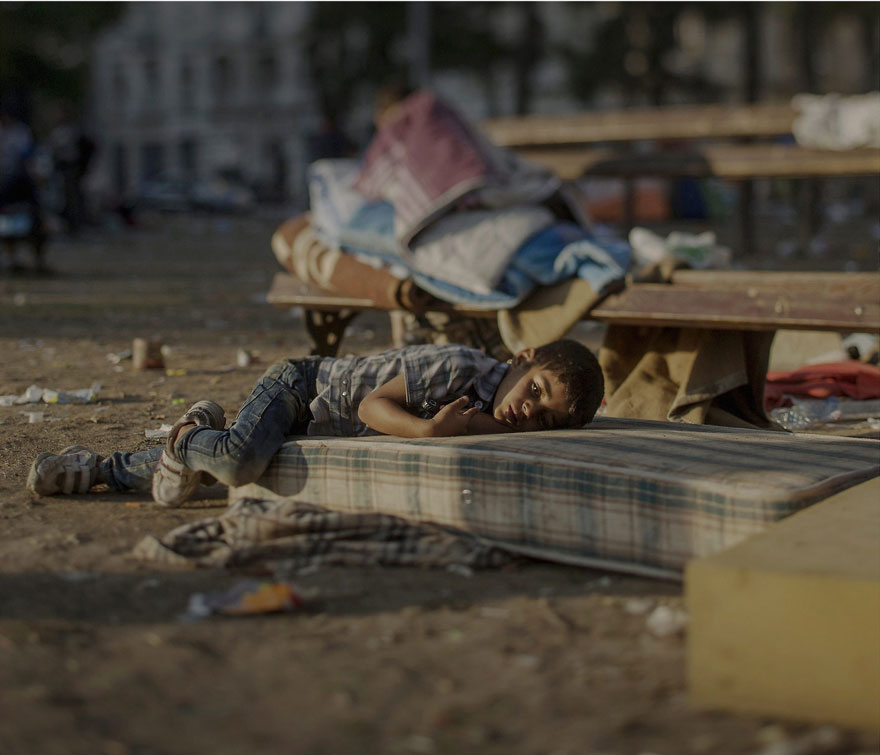 Abdullah has a blood disease. For the last two days, he has been sleeping outside of the central station in Belgrade. He saw the killing of his sister in their home in Daraa. “He is still in shock and has nightmares every night,” says his mother. Abdullah is tired and is not healthy, but his mother does not have any money to buy medicine for him. 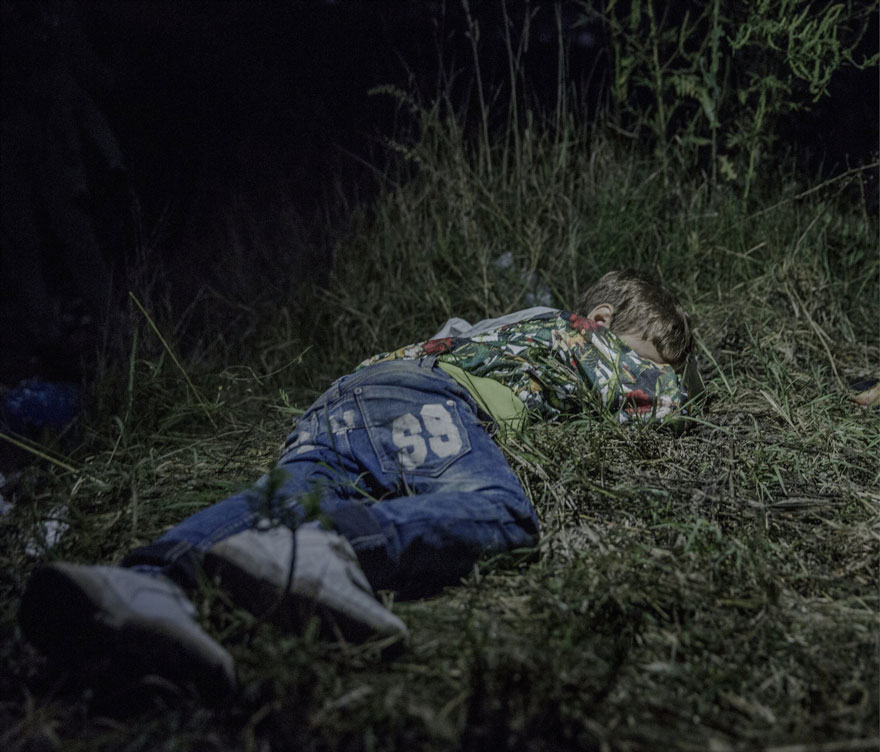 It is after midnight when Ahmed falls asleep in the grass. The adults are still sitting around, formulating plans for how they are going to get out of Hungary without registering themselves with the authorities. Ahmed is six years old and carries his own bag over the long stretches that his family walks by foot. “He is brave and only cries sometimes in the evenings,” says his uncle, who has taken care of Ahmed since his father was killed in their hometown Deir ez-Zor in northern Syria. 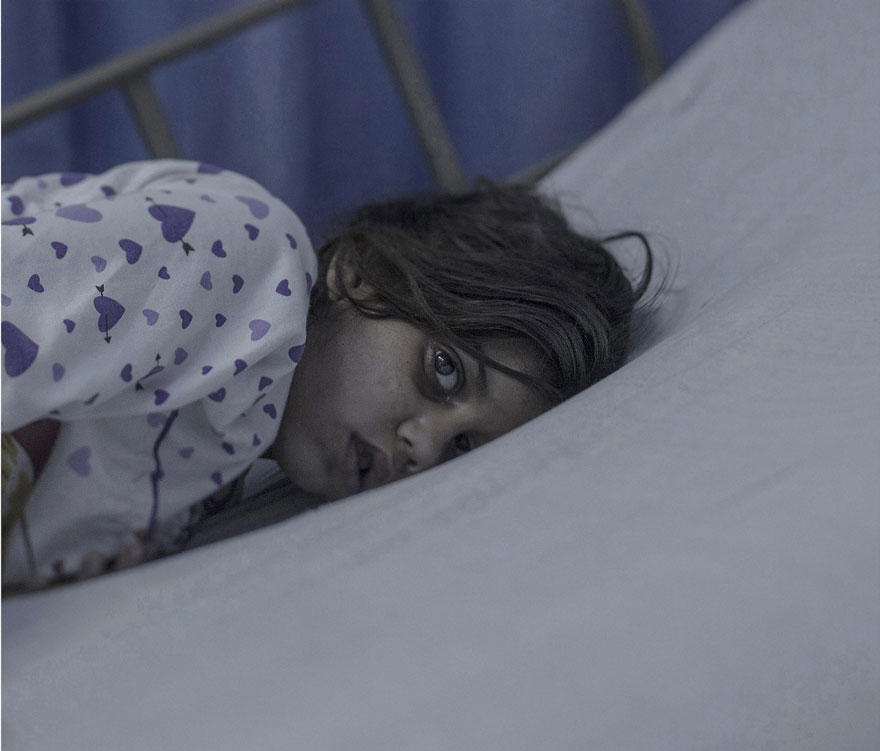 Eight-year-old Maram had just come home from school when the rocket hit her house. A piece of the roof landed right on top of her. Her mother took her to a field hospital, and from there she was airlifted across the border to Jordan. Head trauma caused a brain hemorrhage. For the first 11 days, Maram was in a coma. She is now conscious, but has a broken jaw and can’t speak. 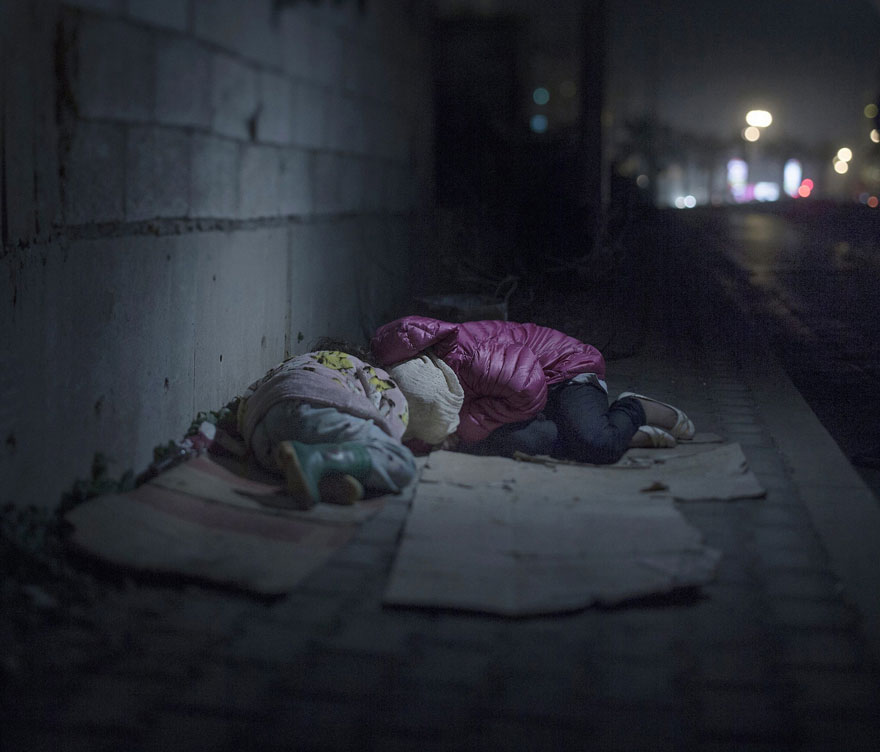 Ralia, 7, and Rahaf, 13, live on the streets of Beirut. They are from Damascus, where a grenade killed their mother and brother. Along with their father, they have been sleeping rough for a year. They huddle close together on their cardboard boxes. Rahaf says she is scared of “bad boys,” at which Ralia starts crying. 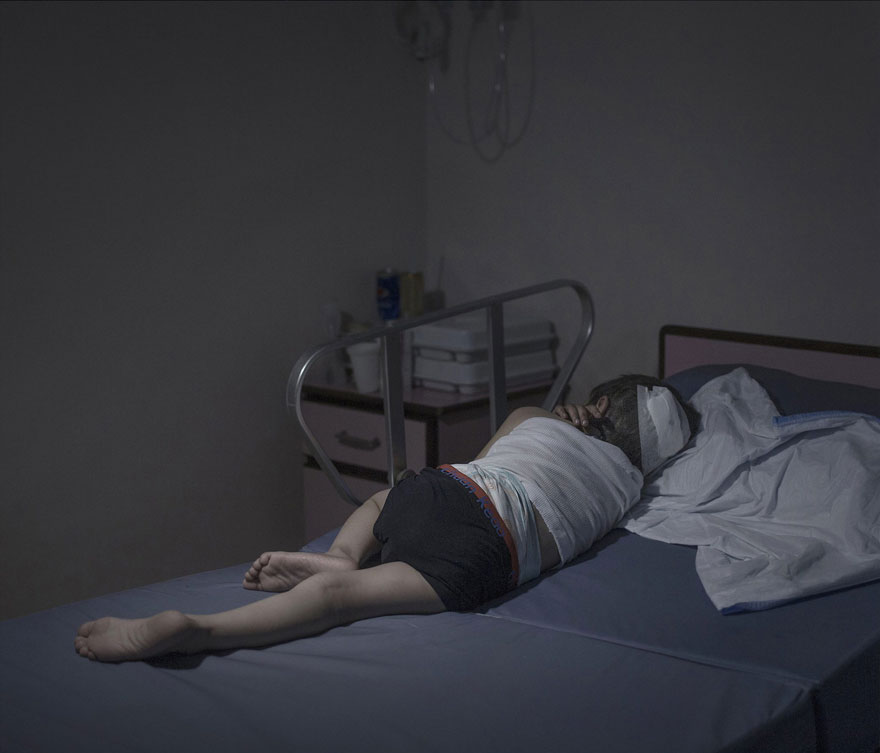 Moyad, 5, and his mother needed to buy flour to make a spinach pie. Hand in hand, they were on their way to the market in Dar’a. They walked past a taxi in which someone had placed a bomb. Moyad’s mother died instantly. The boy, who has been airlifted to Jordan, has shrapnel lodged in his head, back and pelvis. 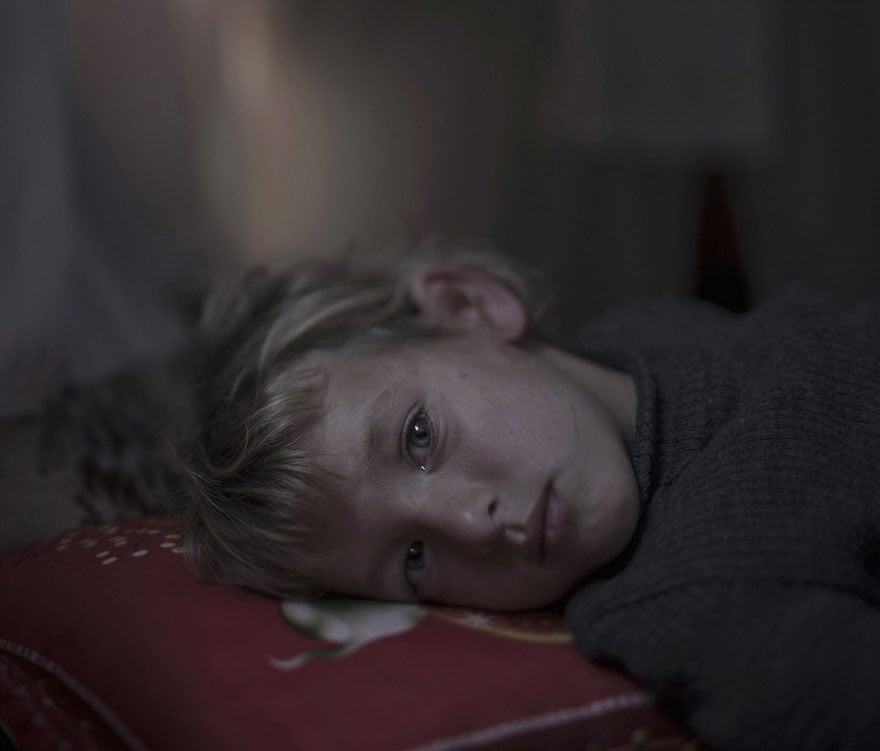 Walaa, 5, wants to go home. She had her own room in Aleppo, she tells us. There, she never used to cry at bedtime. Here, in the refugee camp, she cries every night. Resting her head on the pillow is horrible, she says, because nighttime is horrible. That was when the attacks happened. By day, Walaa’s mother often builds a little house out of pillows, to teach her that they are nothing to be afraid of. 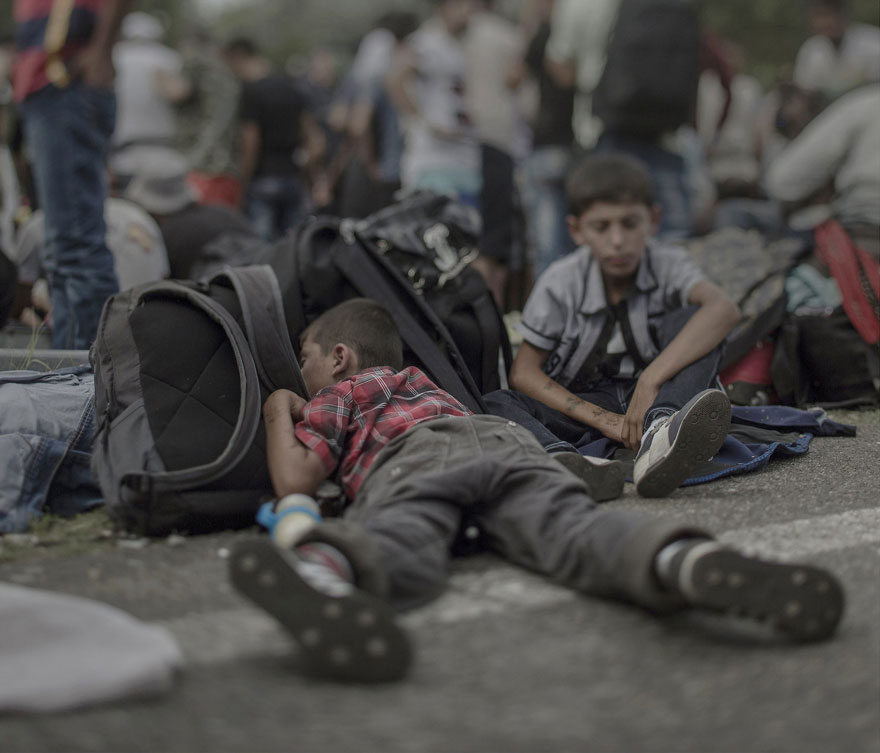 Ahmad was home when the bomb hit his family’s house in Idlib. Shrapnel hit him in the head, but he survived. His younger brother did not. The family had lived with war as their nearest neighbor for several years, but without a home, they had no choice. They were forced to flee. Now Ahmad lays among thousands of other refugees on the asphalt along the highway leading to Hungary’s closed border. This is day 16 of their flight. The family has slept in bus shelters, on the road, and in the forest, explains Ahmad’s father. 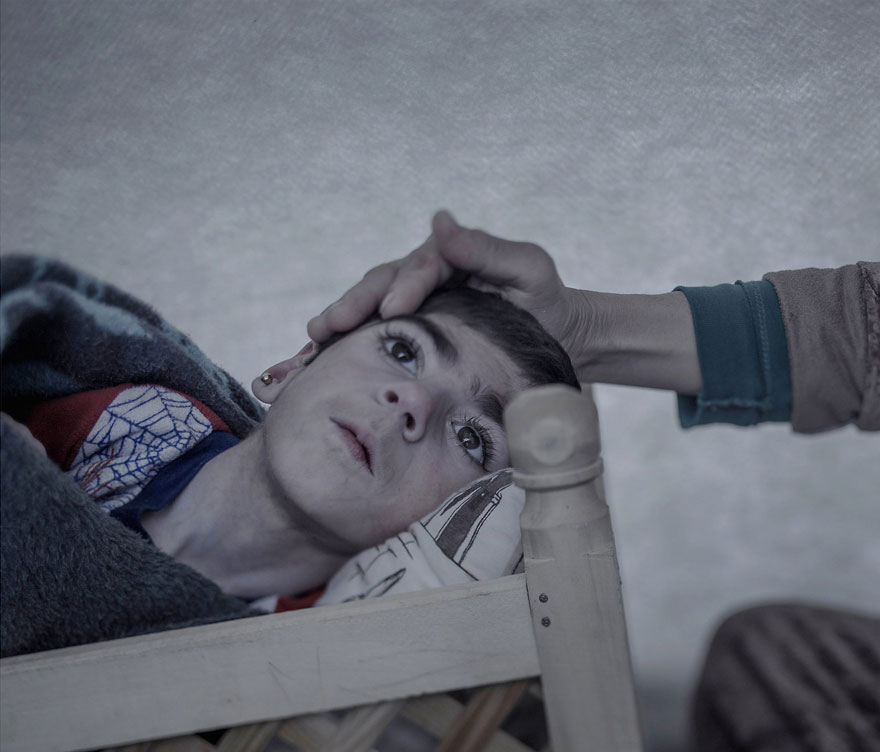 Shiraz, 9, was three months old when she was stricken with a severe fever. The doctor diagnosed polio and advised her parents to not spend too much money on medicine for the girl who “didn’t have a chance.” Then the war came. Her mother, Leila, starts crying when she describes how she wrapped the girl in a blanket and carried her over the border from Kobane to Turkey. Shiraz, who can’t talk, received a wooden cradle in the refugee camp. She lies there. Day and night. 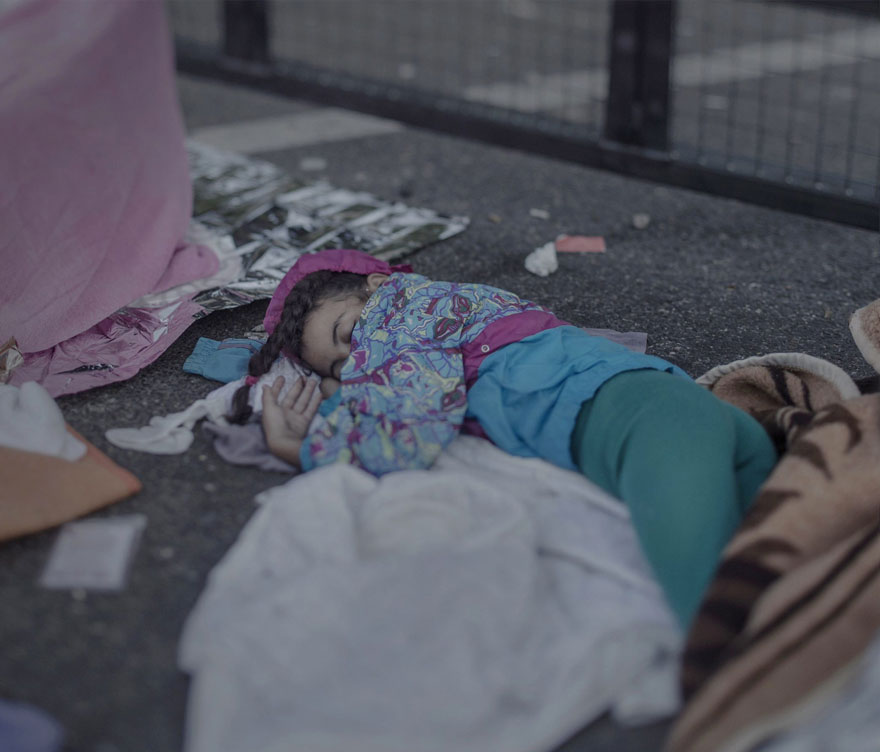 Shehd loves to draw, but more recently, all of her drawings have had the same theme: weapons. “She saw them all the time, they are everywhere,” explains her mother when the little girl sleeps on the ground alongside Hungary’s closed border. Now she does not draw at all. The family brought neither paper nor crayons with them on their flight. Shehd does not play anymore either. The escape has forced children to become adults and share concern for what happens in an hour or a day. The family has had difficulty finding food during their wandering. Some days, they have had to make do with apples they were able to pick from trees along the road. 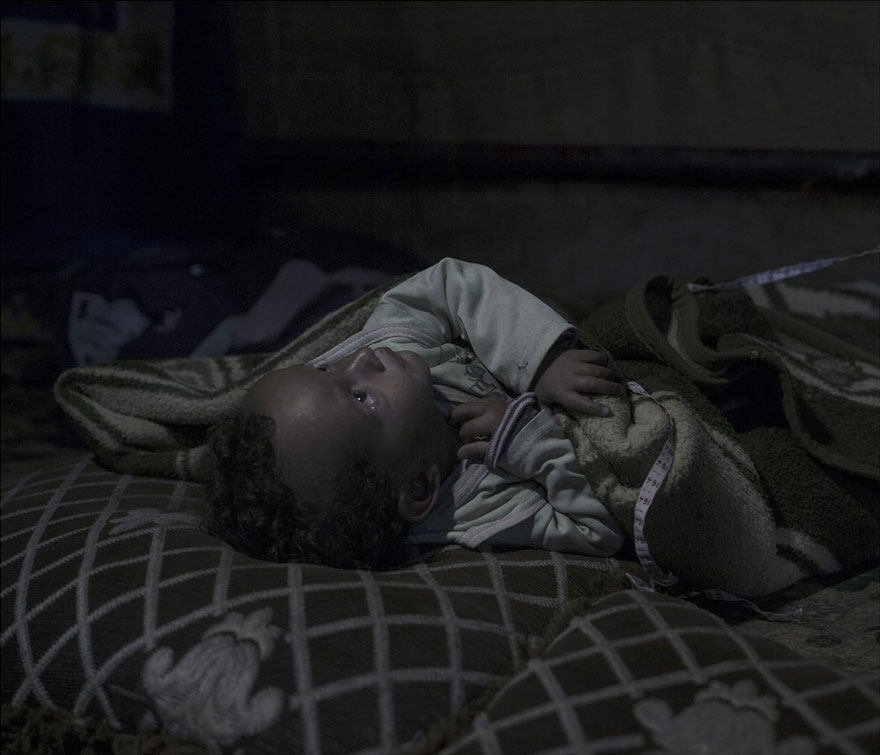 Amir, 20 months, was born a refugee. His mother believes her son was traumatized in the womb. “Amir has never spoken a single word,” says Shahana, 32. In the plastic tent where the family now lives, Amir has no toys, but he plays with whatever he can find on the ground. “He laughs a lot, even though he doesn’t talk,” says his mother. 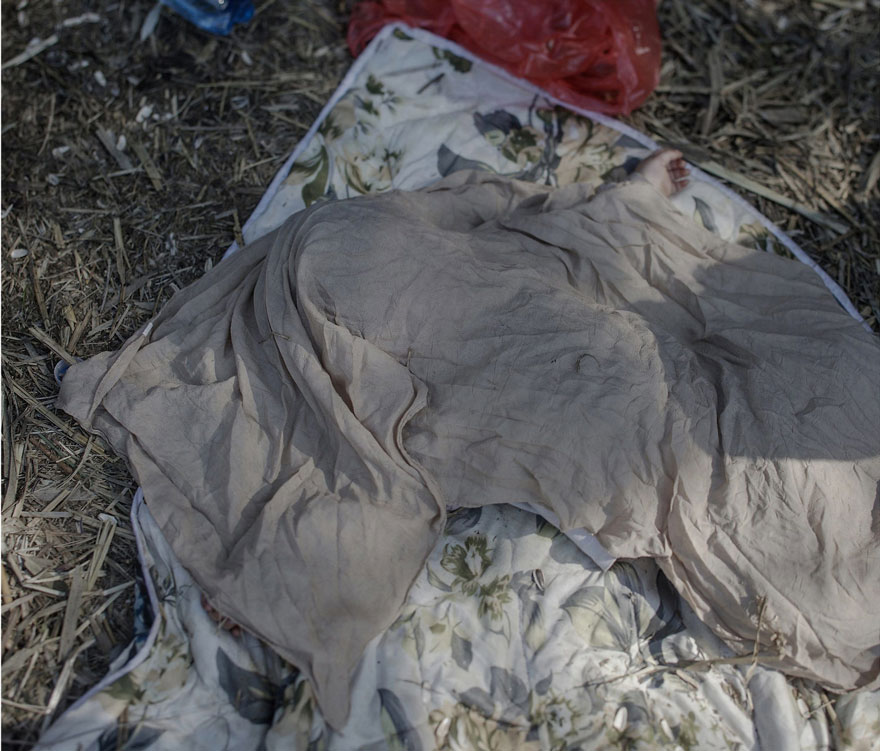 It is 34 degrees Celcius. The flies crawl on Juliana’s face and she shifts uneasily in her sleep. Juliana’s family has been walking through Serbia for two days. This is the latest phase of a flee that started three months ago. The girl’s mother lays her thin shawl over her daughter on the ground. Fatima calms down. A few meters away from their resting place, feet are tramping by in a never-ending flow of people. It is the end of August and Hungary is about to barricade themselves with barbed wire to shut out this stream of refugees. But for a few more days, it is possible to pass through the border city of Horgos. As soon as evening comes, Juliana’s family will go for it. 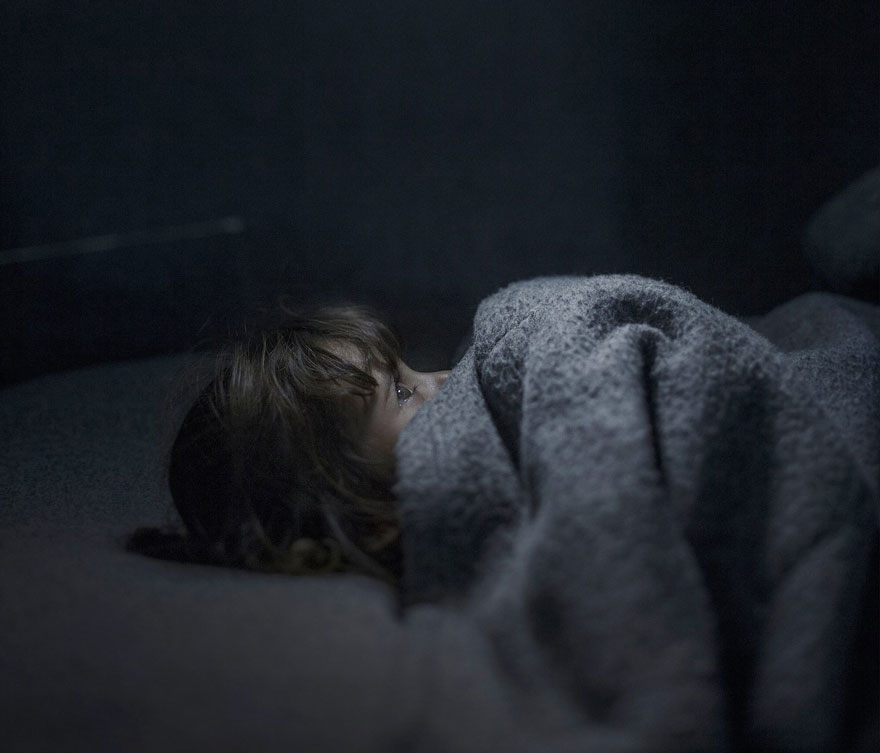 Fara, 2, loves soccer. Her dad tries to make balls for her by crumpling up anything he can find, but they don’t last long. Every night, he says goodnight to Fara and her big sister Tisam, 9, in the hope that tomorrow will bring them a proper ball to play with. All other dreams seem to be beyond his reach, but he is not giving up on this one.