Top Christian Baby Names Starting with ‘B’ – Inspired from The Bible

Top Christian Baby Names Starting with ‘A’ – Inspired from The Bible

Russians are no strangers to cold, and most of them cope pretty well with it, especially after a few shots of vodka, but under -35 degrees is extreme, even for them. Winter swimming is very popular in Russia, and the ritual of the Epiphany has thousands of people bathing in ice-cold water to purify their bodies, but this particular group of swimmers, from the Siberian city of Krasnoyarsk, did it simply for fun. That’s right, they stripped down to their bathing suits and dived into the Yenisei River at -36 degrees Celsius, because that’s what they call a good time. 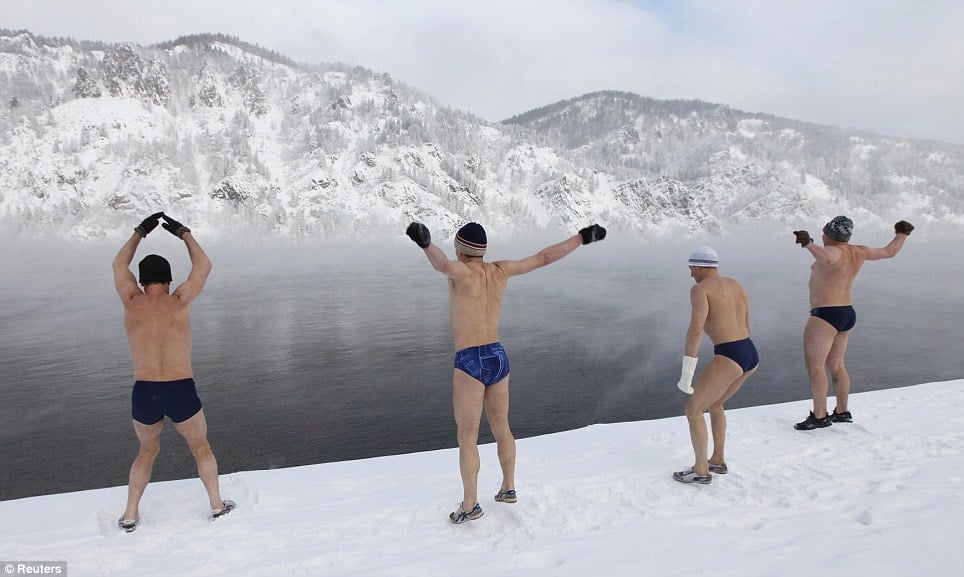 Krasnoyarsk, Russia: Members of a local winter swimming club warm up on the bank of the Yenisei River in the town of Divnogorsk

Winter swimming is the activity of swimming during the winter season, typically in outdoor locations (open water swimming) or in unheated pools or lidos. In colder countries it may be synonymous with ice swimming, when the water is frozen over. This requires either breaking the ice or entering where a spring prevents the formation of ice. It may also be simulated by a pool of water at 0 °C (32 °F), the temperature at which water freezes. In Eastern Europe and Russia winter swimming is part of the celebration of the Epiphany. Competitions for winter swimming also exist.


Religious ice swimming(celebration of the Epiphany): 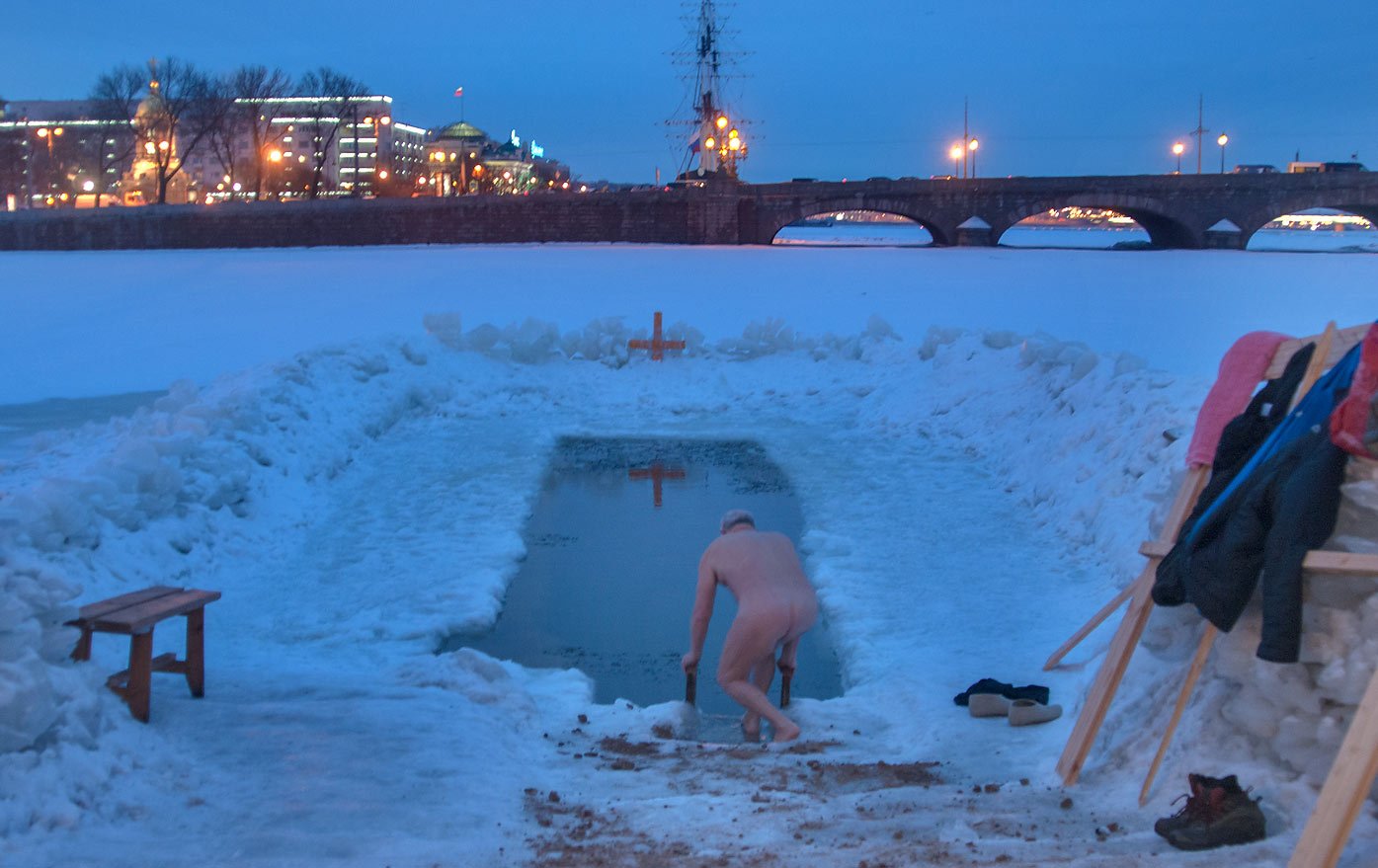 In Russia and other Eastern European countries where Eastern Orthodox Christianity is the prevalent religion ice swimming is connected with the celebration of the Epiphany. The Epiphany is observed on 19 January according to the Julian calendar of the Russian Orthodox Church. The day marks the baptism of Jesus in the River Jordan. To celebrate this, holes are cut in the ice on rivers, lakes or other bodies of water, usually in the form of a Christian or Orthodox cross. Around midnight, believers submerge themselves three times in the water to honour the Holy Trinity, after a priest says a prayer. 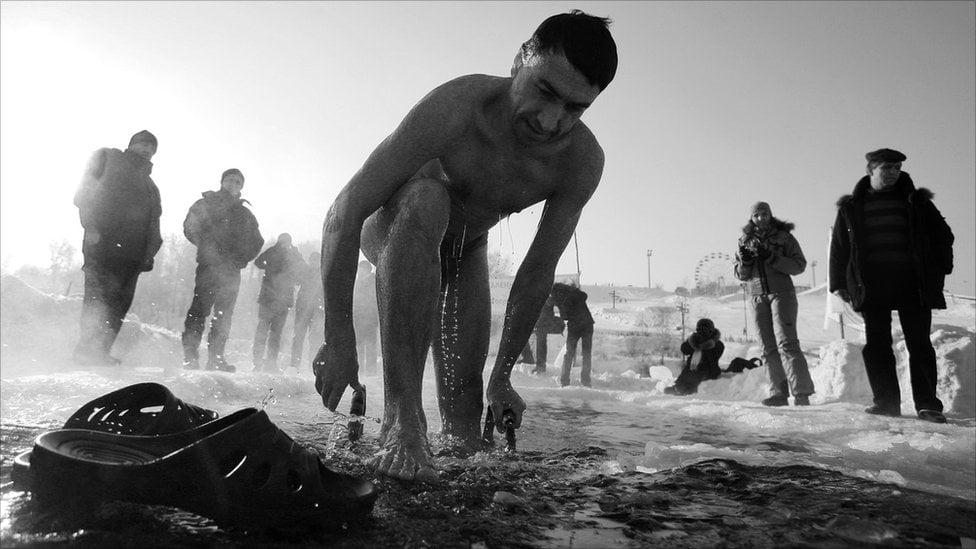 A winter swimmer comes out of the water as he takes part in an ice swimming.

Ice swimming on the Epiphany is relatively new. It was practised by only a few before the October Revolution of 1917 and occurred even less frequently in the time of the Soviet Union, when Christians were persecuted. However, the ritual became very popular in the 1990s since the Dissolution of the Soviet Union. In Moscow alone, 30,000 believers swam in ice holes in 37 fonts during the Epiphany of 2010. There is a popular belief that the practice erases a person's sins, but this is not endorsed by the Russian Orthodox Church. The ritual is also performed in Belarus, Ukraine, Kazakhstan and Kyrgyzstan. 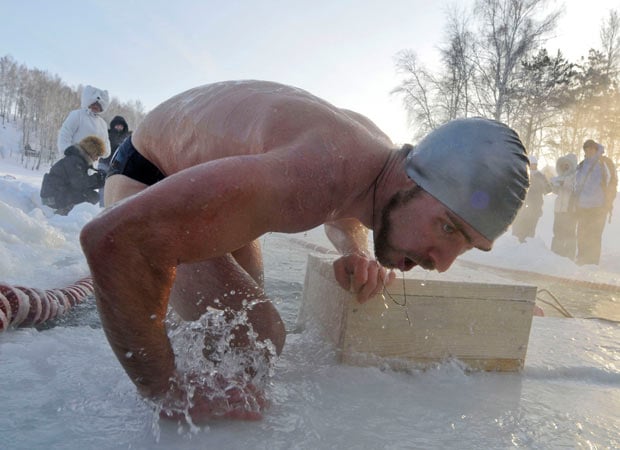 Ice swimming is also practised during the entire winter by Walrus Clubs, whose members are called "walruses". In other Eastern European countries such as Bulgaria and Romania, the Epiphany is celebrated on 6 January. There it is tradition for Orthodox priests to cast wooden crosses in the water, which are then retrieved by the believers. It is popularly believed that the person who finds the cross is freed from evil spirits. Other countries where this is done include Serbia and Montenegro.


How to ice swim: 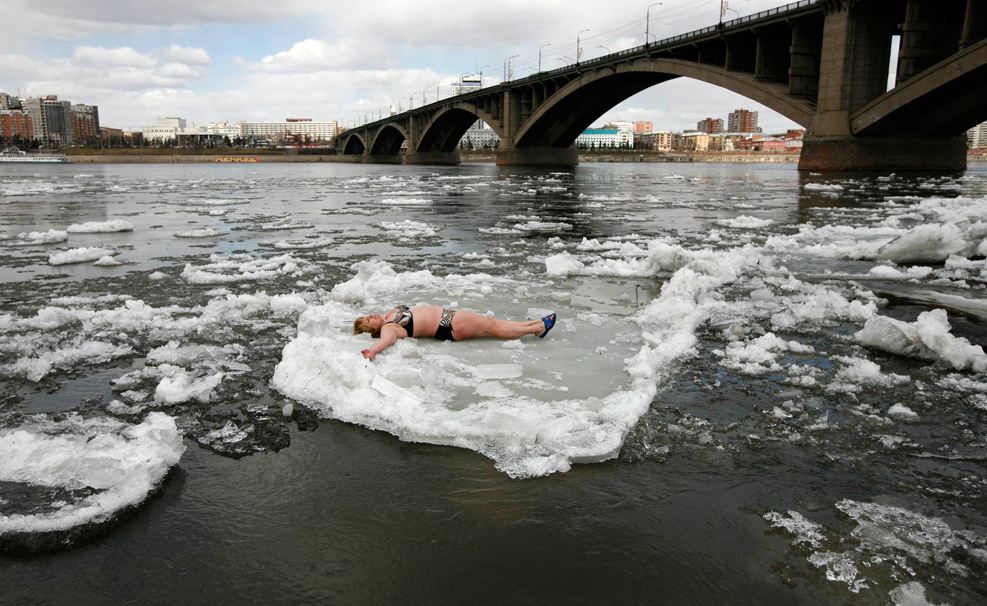 A member of the Cryophil winter swimmers club lies on floating ice from the spring melt on the Yenisei River in the Siberian city of Krasnoyarsk.

The main thing to remember when ice swimming is that unless you are a very experienced 'walrus' more than 3 minutes spent in the water will prove extremely dangerous or even life-threatening for the body. Body heat is lost 25 times faster in water than in air and it is largely the body’s increased adrenaline which keeps it functioning during the plunge into cold water. Rapid cooling of the skin triggers various heart and breathing responses, usually manifesting in gasping and an increased heart rate.

Enthusiasts participate in a winter swimming competition in Vladivostok

During a dunk under, the heart rate can increase by 50% and blood pressure increase can rise to around 175/93. Although a substantial strain on the heart, these changes are not likely to be a problem for a healthy, fit person but may be dangerous for those with underlying heart disease or hypertension. 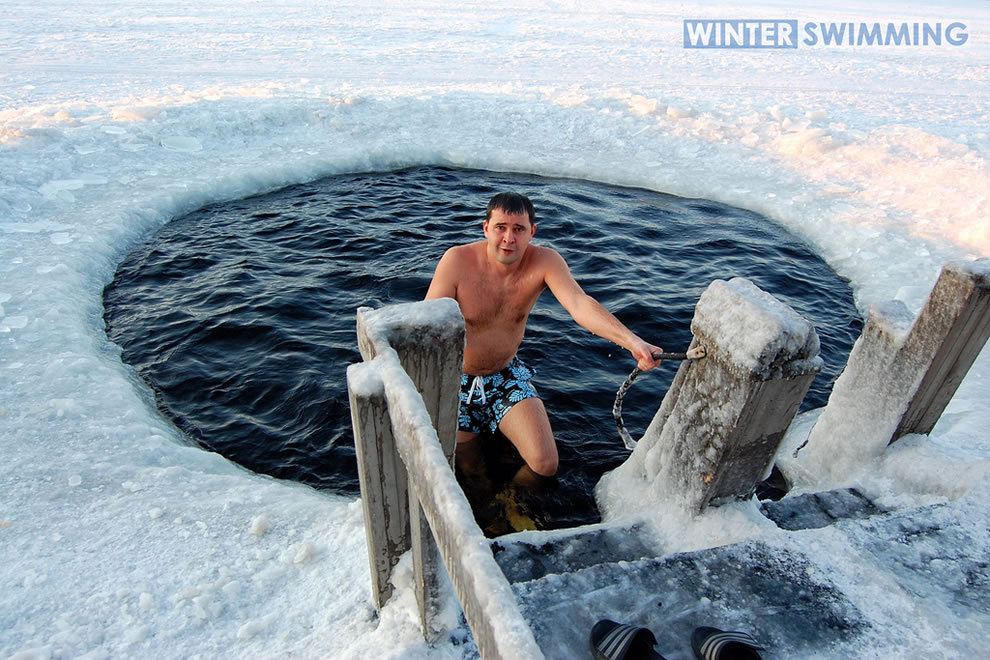 The second thing to remember is to be prepared. First time swimmers should only go along with experienced ice-swimmers who can pull you out after and offer advice to help you enjoy the experience more. Absolutely no alcohol should be drunk before hand – it increases the chances of hyperthermia, and warm clothing should only be removed at the last moments and kept to hand to immediately dry the water off afterwards. 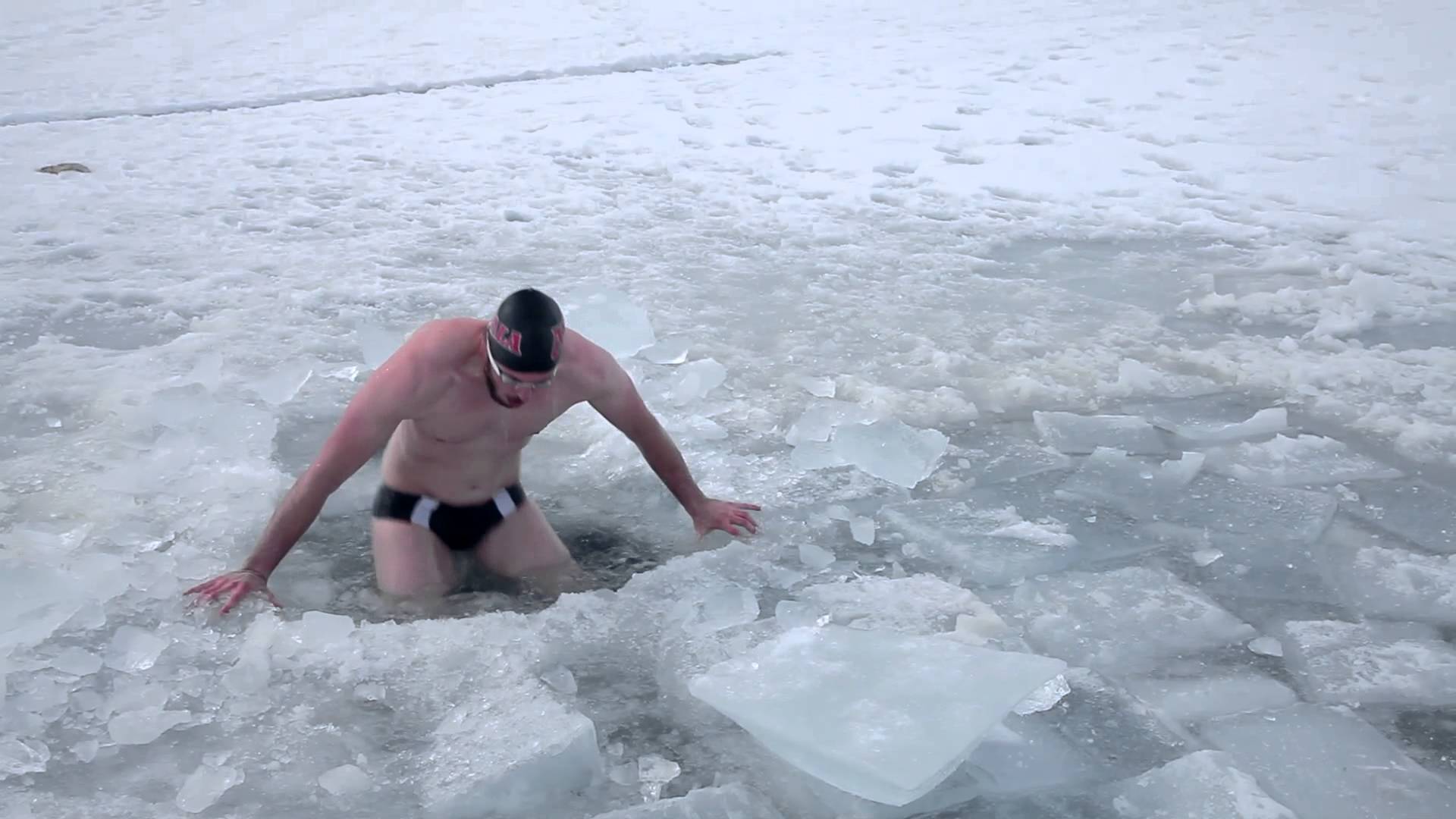 In case you were wondering, they all survived this crazy stunt, which means they’ll probably survive the next ice age. 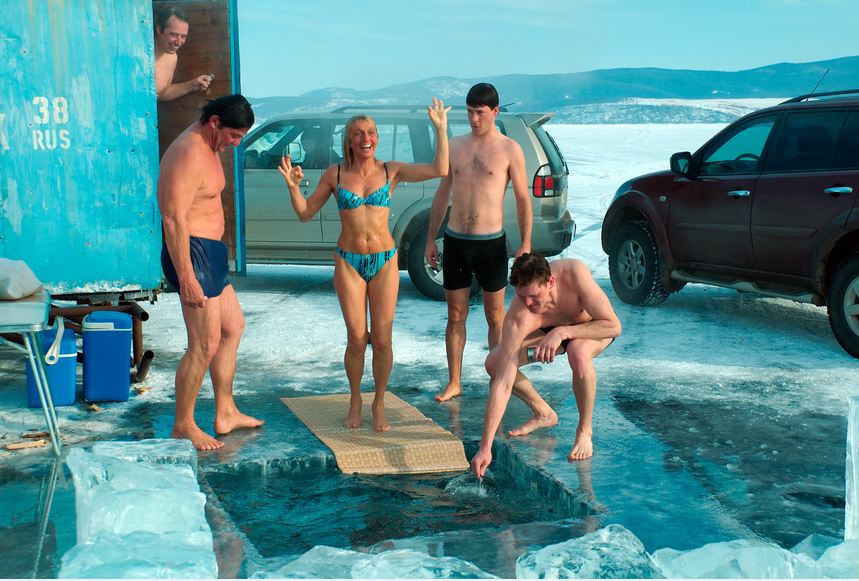