The railway system in Japan is so well developed, punctual, extensive and diverse that you can simply assume that wherever you plan to go – there is a train that will take you there. Another symbol for Japan is the crazy train traffic. In Japan the rail way system is absolutely huge. Everyone there uses the train. If there is one thing I can advise you. If you are not used to travelling in Japan. Please avoid the peak hours!

Have you ever heard of Train Pushers? 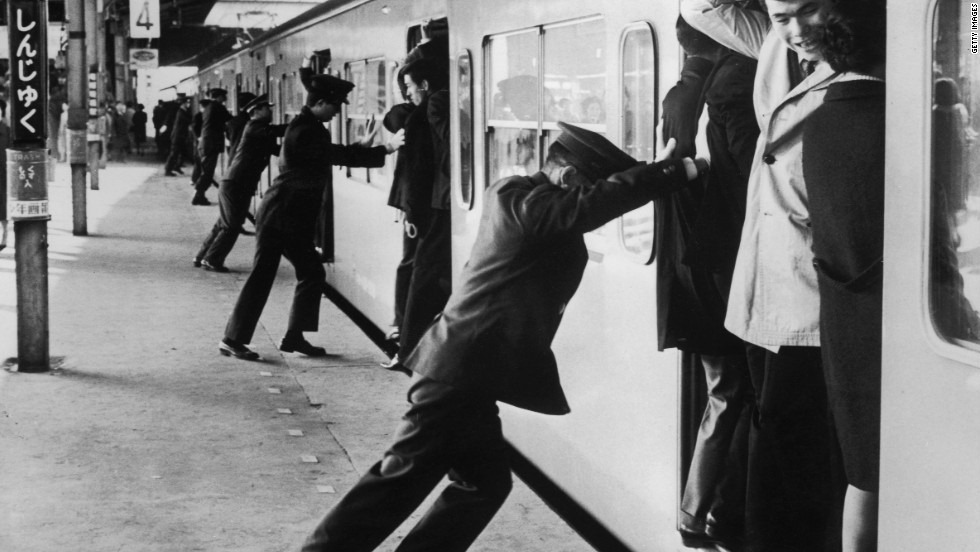 “Oshiya” or “pushers” at Tokyo’s Shinjuku station trying to pack as many passengers as possible into the carriages during rush hour in 1967. Photo credit: CNN

In Japan, During rush hours, railway station attendants called “pushers” or “oshiya” doing weirdest jobs in the world –  push passengers into the trains. It is unevitable due to large number of commuters who wishes to arrive at their desired locations on time that is they have to endure the pain in squeezing theirselves inside the train. 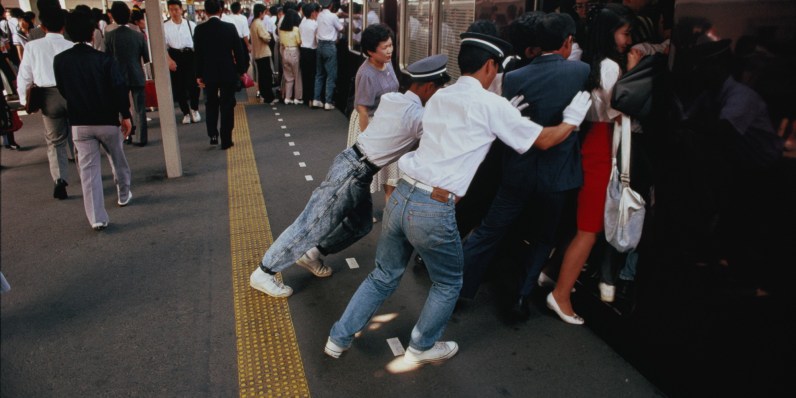 Also in Japan, if you commit suicide by jumping into an oncoming train, The train company can/will sue your family for the clean up fee, loss of income and negative publicity brought on by your suicide. If the train is delayed for 5minutes, the train attendant will bow personally to every passenger in the train and will definitely issue a delay certificate for the passengers to show to work or school if they get late. And if it is more than that, The train may even get into the news! Interesting isn’t it? 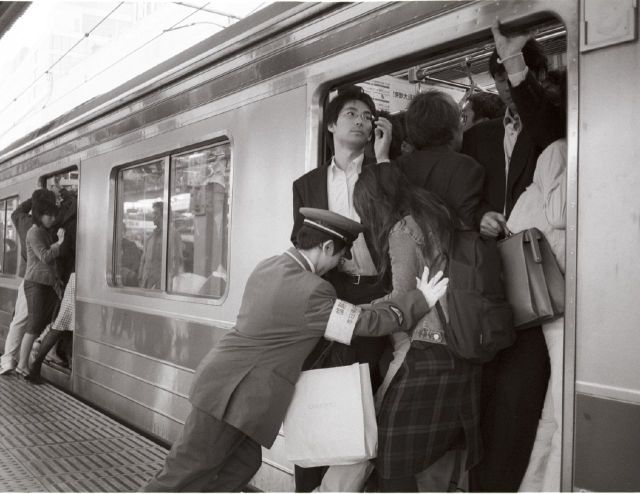 In 2012, Hong Kong- based photographer Michael Wolf created a photo series named Tokyo Compression, where he captured the traumatized and pained expression of commuters as their faces were crushed against the windows. These pictures show how horrible and shameful the situation inside the subway is. 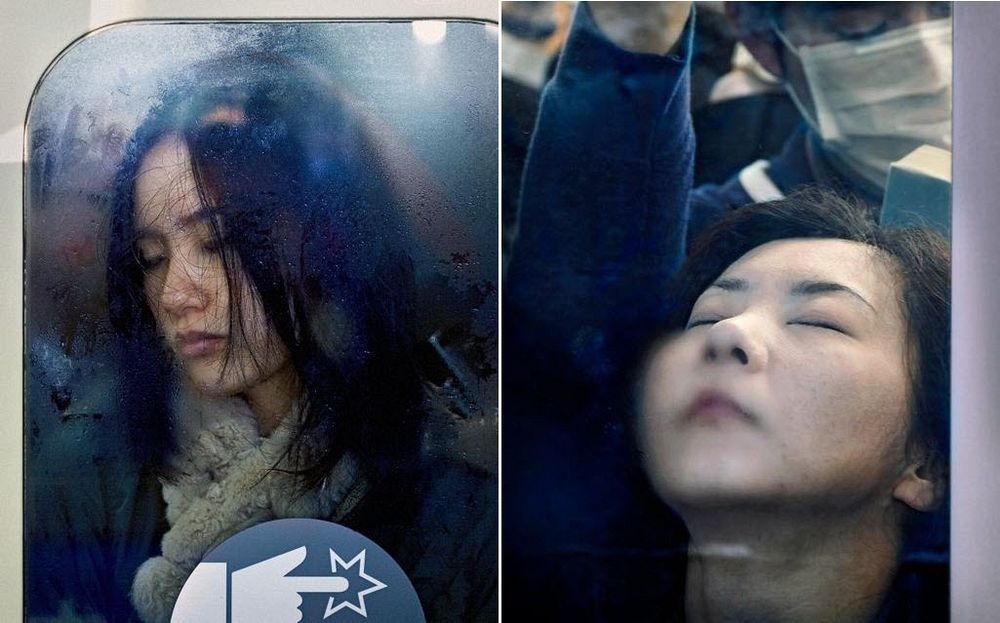 Bodies are squished so tightly against one another that most people can’t physically move. Short persons suffer the risk of getting smothered against the coat of their fellow passenger. Getting off at the right station require strength and determination, and fire hazards and emergency evacuation are serious issues. The subways are also fertile grounds for pickpockets and gropers. 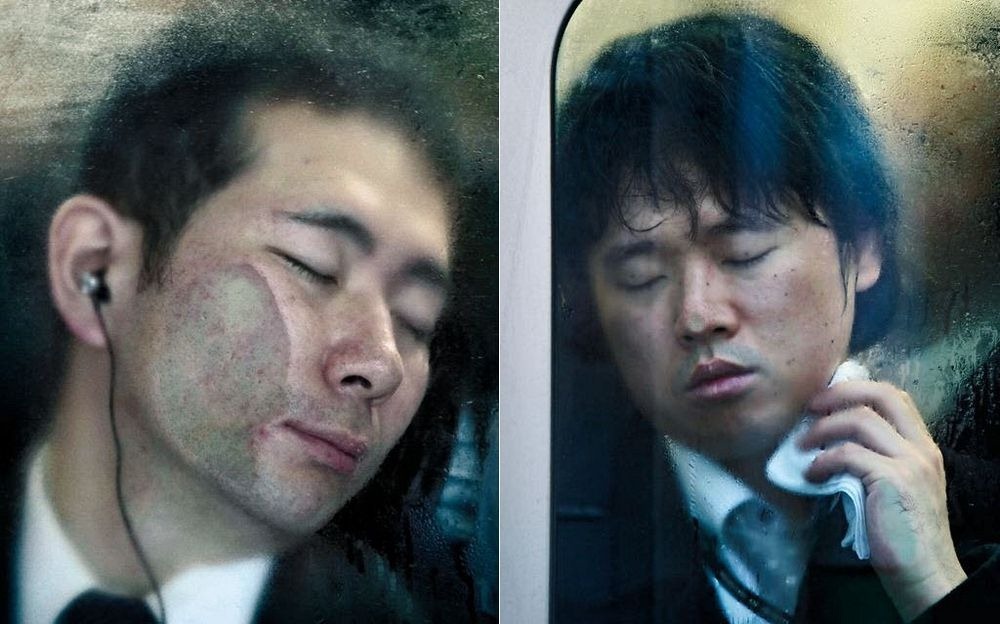 When pushers were first brought in at Tokyo’s Shinjuku Station, they were called “passenger arrangement staff” and were largely made up of students working part-time. Nowadays, there are no dedicated “pushers”. The station staff and part-time workers fill these roles during rush hours. 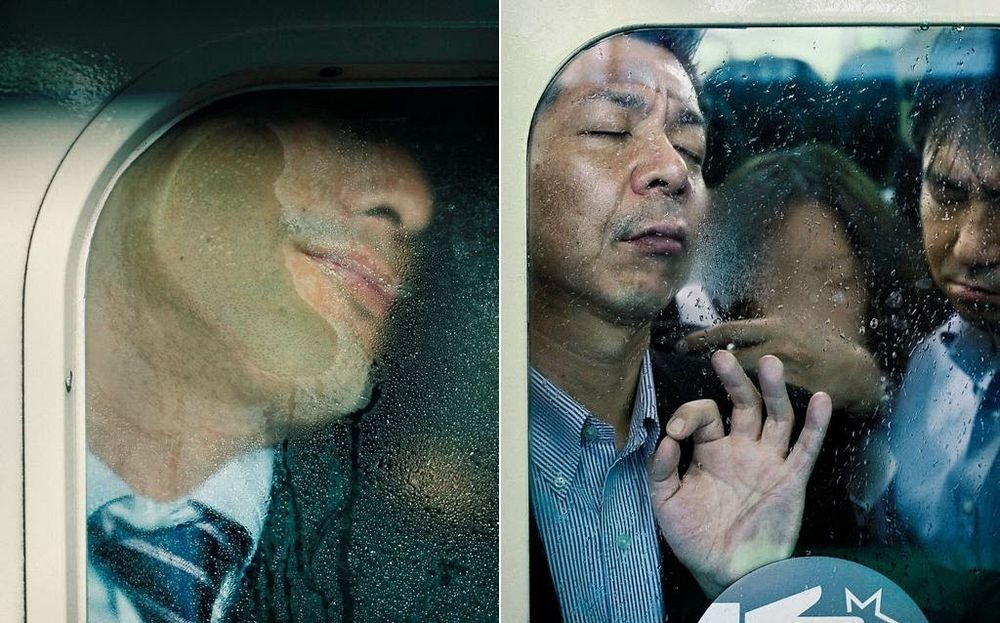 Although a Japanese phenomenon now, subway pushers were an American invention and originated in New York City, nearly a century ago. They were not very well-liked because they were known to push and shove passengers with hostility. The vigor with which the guards often did their job earned them the reputation as “sardine packers”. 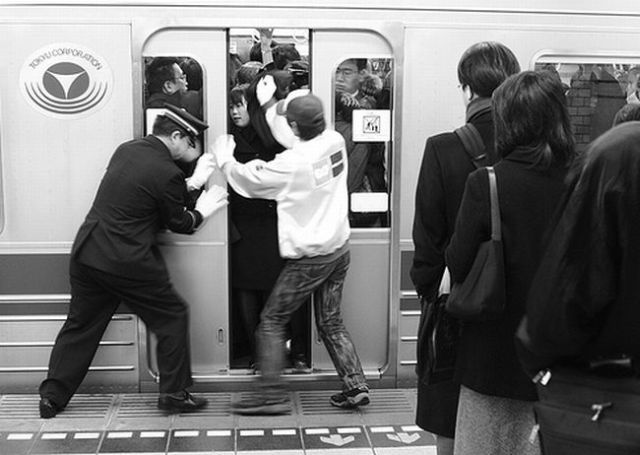 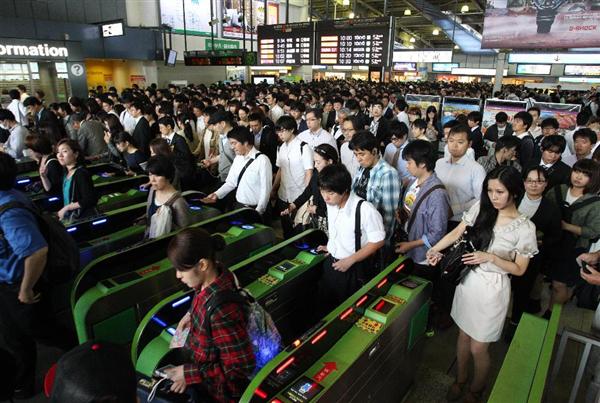 3. Will You Get GROPED on Tokyo Subway? — Tokyo, Japan

If your question is:

What is it like to work as a “pusher” in Tokyo’s subway system?

A lot, I suppose, like being a Normal Station Attendant or Train Conductor, 90% of the time. There is no “Dedicated Train Pusher” job title on either the Tokyo metropolitan train or subway systems… At least, not anymore!

Thought, the station workers’ main job is not to push people into the trains during the morning commute. They ensure the safety of passengers and signal the drivers that it’s safe for the train to depart. However, in the mornings they help facilitate boarding!

Train stuffing is a comparatively rare occurrence that happens only during the confluence of two factors:

Walk with me here a minute, and it’ll make more sense. In a single day, the Yamanote line (most famous for the train stuffing effect, and pictured in the Question above) serves 3.5 million riders at 29 stations – by comparison, the entire NYC subway system serves 5 million a day across 26 lines and 468 stations.

When I lived in Tokyo a few years back I caught the Sobu line. There were ‘pushers’ that only worked during peak times (which was usually only the morning). They (about 5 employees) would be spaced apart on the platform and would franticaly run to a particular carriage if the door couldn’t close properly in order for the train to depart.

You have to push quite hard if you are a passenger, but as with everything in Japan there is a polite way and a rude way. When the doors open the carriage looks as though nothing else could possibly fit but as they say, “there’s always room for one more (or 10)”.

Sometimes I felt sorry for women who weren’t strong enough to push themselves into a carriage, they would have a few failed attempts and then make a desperate bid at the next carriage.

Once you’re in, you’re in and there’s no moving. I would decide where I would place my hands before boarding as you physically can’t move once you’re in there. More often than not I chose to have my hands on my upper chest so they were visible, men copping a feel in the trains is common.

Like I said, trains are only really busy in the morning because everyone needs to get to work early, that’s the only time I would see pushers. Whereas at night, the trains are still busy but nothing compared to the the AM as most workers are either finishing really late or having a drink.

It’s not so bad if you schedule your trips realistically, but Japanese and foreigners working for Japanese companies are often slaves to the time clocks so sometimes they feel that even a two minute wait for another train is more time than they can afford.  In that case, you just jam yourself in and make the best of it.

Here’s a tip, though.  If you have to get in a train like this, try to get in at the front of the line and once past the doors, immediately start working your way left or right away from the door crush itself.  The center of the car is still going to be crowded, but you will be able to breathe.

Another tip. If you’re tall (like me) you can use the straps and bars to pull yourself in deeper rather than pushing directly against the passengers in front of you.

Final tip. On trains that are known to be frequented by chikan (perverts) keep one hand on a overhead strap and a book in the other.  That way of a sneaky bastard reaches around you to cop a feel from the young lady directly in front, she’ll know it wasn’t you when she turns around to glare.  (This has actually happened to me.)