Johnny Lever touching solo performance- This will make you cry

1.   According to a report on Thenewsreports.com, Colors has cut down the number of times Comedy Nights with Kapil airs every week without any official announcement. According to sources, it was Kapil Sharma himself who had requested to decrease the frequency as he wants to pursue his film career, the report stated. The report quoted a source saying that with the shooting of Kapil Sharma's film with Abbas-Mustan gathering momentum, the show's frequency had to be reduced. 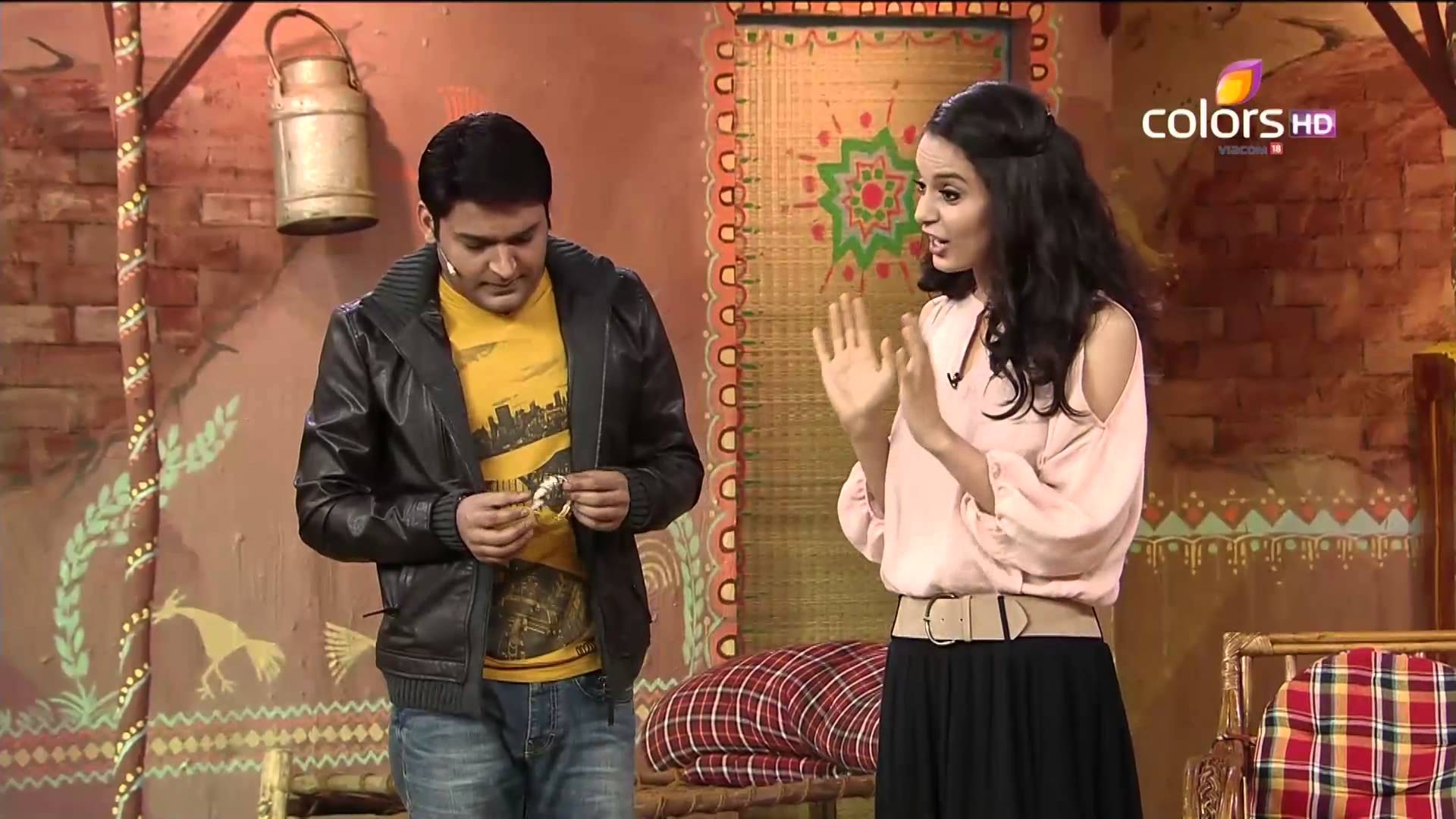 2.  Kapil Sharma’s TV show Comedy Nights With Kapil has managed to emerge as one of the most-watched shows on TV. CNWK is ruling the small screens since its launch last year, and is still ruling the TRP charts due to its unique concept. Kapil Sharma and his peculiar family members including his crazy daadi, flirty bua, interrupting wife, irritating father-in-law and neighbour Palak are now identified and mimicked by their fans. 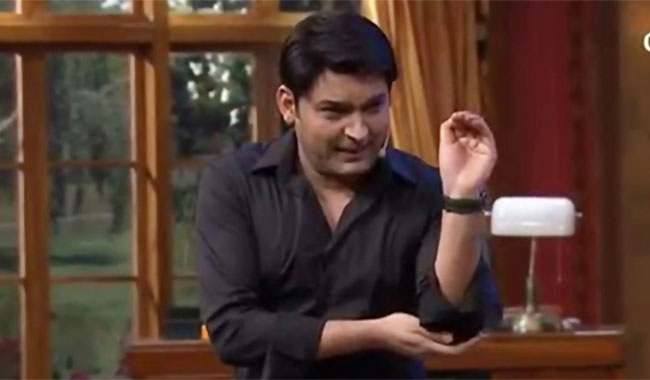 3.  Kapil Sharma emerged as the winner of The Great Indian Laughter Challenge (Season 3), but became a celebrity only with the launch of the TV show Comedy Nights With Kapil. The comedian hails from the state of Punjab and wanted to be a singer. Apart from winning several comedy shows like Comedy Circus Ke SuperStars, Comedy Circus Ka Jadoo; the left-handed artist had also won Kahani Comedy Circus Ki with his on-screen wife Sumona. 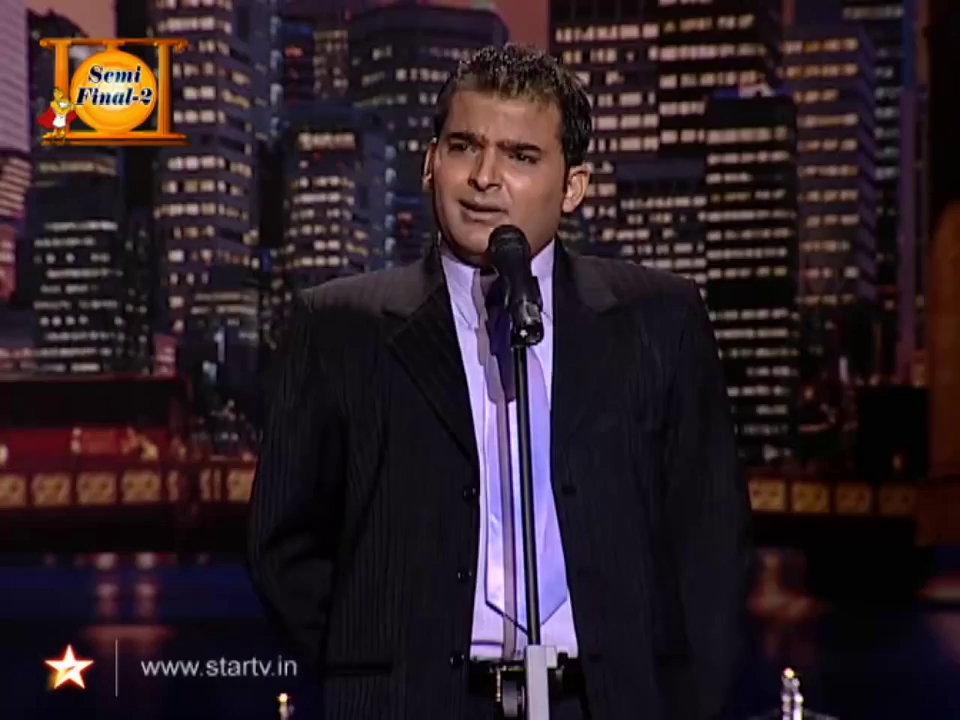 4.  Kapil Sharma’s crazy daadi has kissed all – from Shah Rukh Khan to Saif Ali Khan. But daadi actually is actor Ali Asgar who has played several prominent roles like Kamal Agarwal in Kahaani Ghar Ghar Ki, Inspector Raj Aaryan in comedy show F.I.R and Juju in the comic show Jeannie Aur Juju. Ali has also worked as a supporting actor in several films like Tees Maar Khan, Partner and Agneepath to name a few. Reportedly, the actor was even offered a role by Salman Khan in the blockbuster film Kick but due to lack of dates, he could not take up the role. 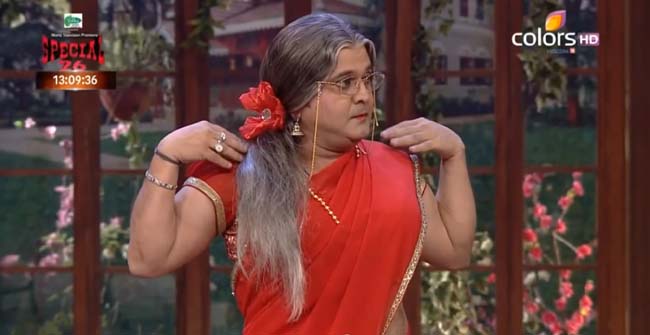 5.   Comedy Nights With Kapil cannot be complete without the presence of Kapil’s ‘twenty-two’ year old bua. Actress Upasana Singh plays the role of Kapil Sharma’s aunt who is still single and ready to mingle. Upasana is known for her role as the deaf and mute girl in the Anil Kapoor-Sridevi-Urmila Matondkar starrer film Judaai. She has also played several memorable roles like Kamlabai in Ishq Vishk and Gangu Tai in My Friend Ganesha. The actress also played the role of Kali Pari in the show Sonpari and was recently seen in Bani – Ishq Da Kalma. She is married to her ‘Aye Dil-e-Nadaan’ co-star Neeraj Bharadwaj. She is also a big name in Rajasthani cinema and has worked in several Punjabi, Bhojpuri, and Gujarati films. 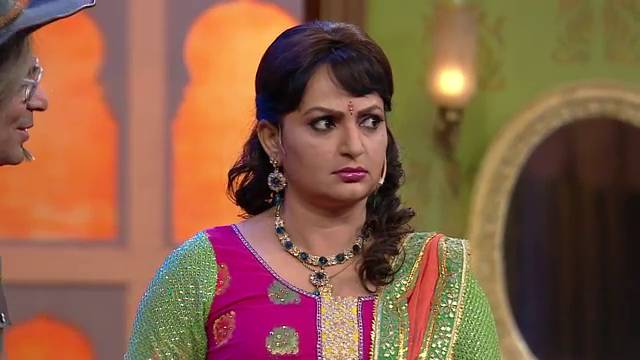 6.   Sunil Grover is back on Comedy Nights With Kapil as Kapil’s father-in-law who is hated to the core. Sunil shot to fame as Gutthi but left the show to launch his project Mad In India. The Sudarshan aka Sud of Hassey Ke Phuarey heard on Radio Mirchi is also remembered as Balu of the comedy show Gutur Gu. The actor who cross-dresses on Comedy Nights With Kapil, has also been seen in big banner films like Zila Ghaziabad, Ghajini and The Legend of Bhagat Singh. 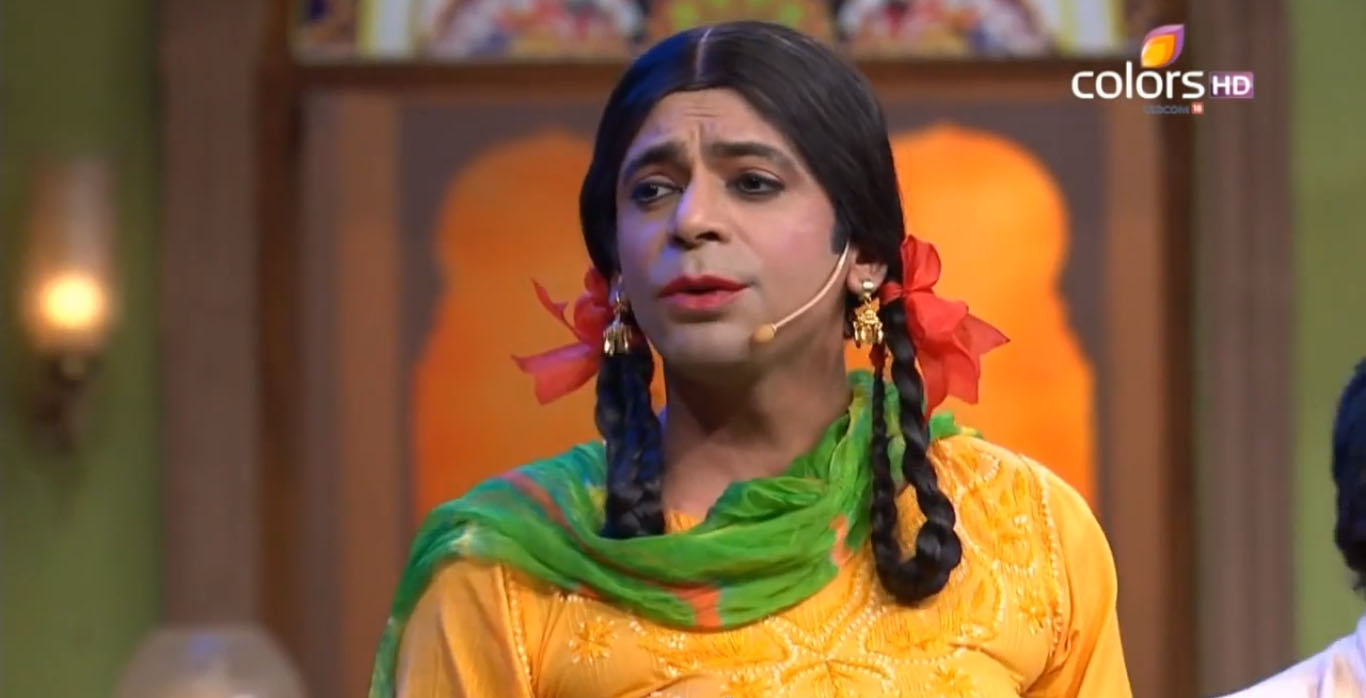 7.   Kapil’s wife Manju aka Sumona Chakravarti considers Kapil to be her brother in real life. However, the two not just play a married couple on Comedy Nights With Kapil but had also won Kahani Comedy Circus Ki together. Sumona was also seen as Natasha in Bade Achhe Lagte Hain and recently seen as Jacqueline’s friend in the blockbuster film Kick. Sumona, who is often criticised by Kapil for her big lips, is an aspiring model and has also won the Miss Mumbai title in 2005. The actress has worked as a child artist in the film Mann and played a cameo role in the award-winning film Barfi!. 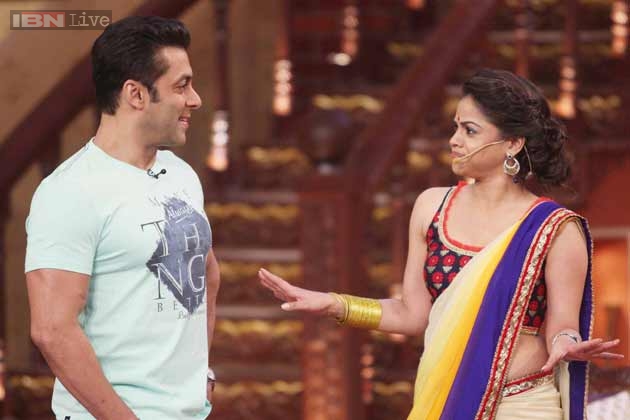 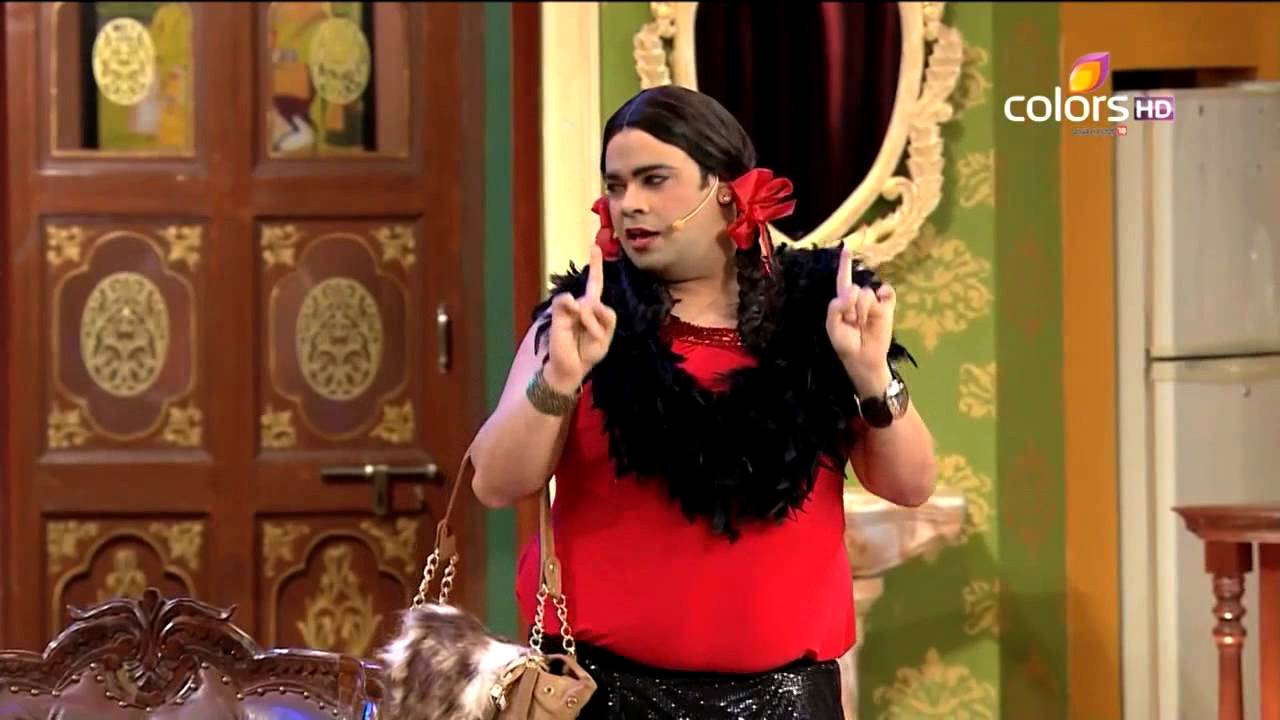 9.  Kapil Sharma often insults his servant on Comedy Nights With Kapil and is also insulted by him in return for his poor lifestyle. Chandan Prabhakar who plays Kapil’s servant Ramu, is one of his few friends roped in from the The Great Indian Laughter Challenge. Chandan was the runner-up on the third season of the stand-up comedy show which had Kapil Sharma as the winner. 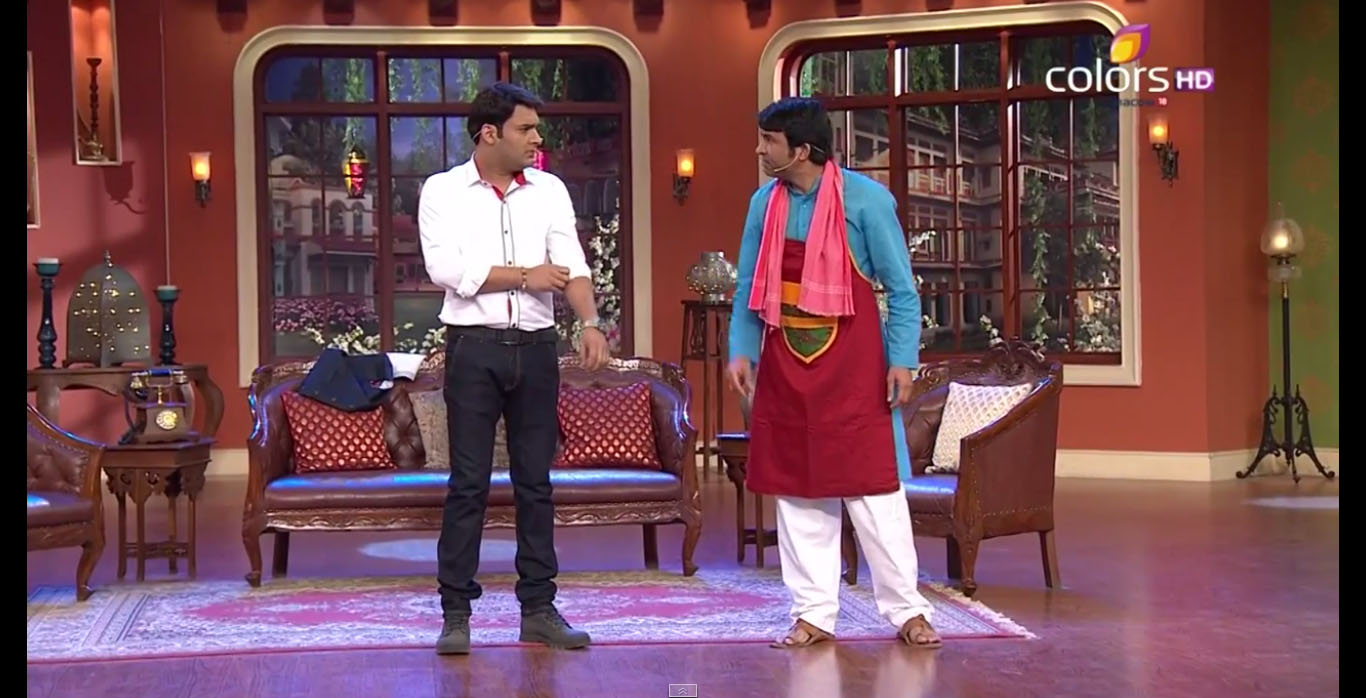 Bunch of Talented youngsters came together to create magic and give tribute to A R Rehman by using Glasses & Bottles. What happens when you...
Read more

This Taiwanese Animation will Tell You, Why Kanye...

After Kanye West's longtime DJ, Mano, was fired by the rapper for undisclosed reasons, Taiwanese animators have produced a brilliant's bizarre video detailing their...
Read more

They have got looks, they are loaded with talent, they have an uncanny attitude and they are undoubtedly the only reason why Indian men...
Read more

Forced perspective is a technique which employs optical illusion to make an object appear farther away, closer, larger or smaller than it actually is....
Read more
Load more