Story of Hawa Abdi: Mother Teresa of Somalia | Heroes in the Land of Pirates

A woman who has never raised her fist in anger against another human being, but also one who could perform three C-sections on dirt-poor women, wash her hands, then go straight outside, stare down an army of gun-toting hardcore fanatical Somali militiamen, and with four words send them running for their lives on a light-speed rainbow of shame and self-loathing without even fucking blinking. she described once as the “one part Mother Teresa, one part Rambo”

There is no need to explain Somalia.Somalia is a war-torn wasteland of anarchistic warlord-controlled destruction so miserable that the UN has referred to it in official documents the “worst humanitarian crisis on the planet” In a country bruised by two-decade civil wars, Somalia is still in the throes of its worst humanitarian crisis. According to the UN Food Security and Nutrition Analysis Unit, more than 2 million Somalis are still living in the crisis and dependent on humanitarian aid to survive.

Scroll Down For Video!!

Let’s see who is she what she done:

Born in Mogadishu, Somalia in 1947, her mother died in childbirth when she was 12. Her father supported her to pursue her dream of becoming a doctor. At 17, she won a scholarship to study gynecology in Kiev, Ukraine during the 1960s. After completing her studies, Dr. Hawa Abdi returned to Somalia in 1971.

(this is a big deal in a country under Sharia law, where some dudes don’t really see the point in a woman doing anything other than cooking dinner and shooting out babies)

In 1983, fresh off her successes in Mogadishu and looking to set up her own practice  As the government collapsed, and the Somali Civil War began, she has dedicated herself to providing help for people whose lives have been shattered by violence and poverty.People traveled from across the land to see her, some women carrying their infants for days on foot across the countryside, and before long Dr. Hawa was seeing hundreds of patients a day. That number increased exponentially after basically the entire country exploded into civil war in 1991. 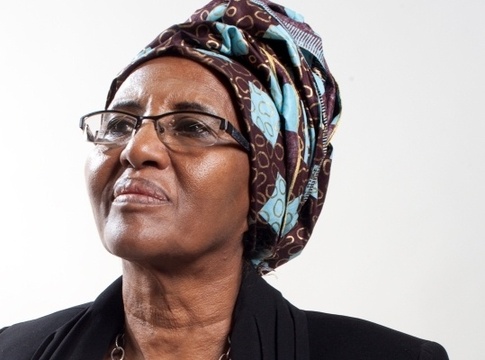 Dr. Hawa didn’t blink. She sold all of her jewelry, liquidated her assets, sold off parts of her land, and pleaded for humanitarian aid from NGOs. Despite the destruction, war, and subsequent famine ravaging the land all around her, Hawa Abdi spent the next 29 years providing a safe haven for the displaced, turning her tiny one-room shack into a 400 bed hospital, and her 1,300-acre farm into a refugee camp where 90,000 displaced Somalis received free food, clean water, free health care, and a clean place for women to give birth. She built a school that educates 850 children between the ages of 7 and 18. She negotiated for fishing boats and farmland so her people could grow and fish for their food. She personally spent 12-hour days, 7 days a week, delivering babies, treating gunshot wounds, and setting up IV lines for malnourished children, and she’s done it all through donations and her own personal funds, without hardly any international funding or aid.

Oh, and this isn’t even the badass part yet:

Apparently there are some pretty magnificent pieces of human garbage who felt like it was totally bullshit how this woman was using her own money to help people – over the last 20 or so years about a dozen local warlord douchebags tried to shut her operation down at gunpoint.They’ve blocked aid, raided her camp with machine guns, and threatened her life dozens of times.
Hawa Abdi could give a shit. She’s not impressed by dickless bullies preying on the weak and the wounded, and she’s more than prepared to lay it all on the line for the sake of defending her people and exposing these spineless asshats for the chumps they truly are. In the early 2000s, when an International Red Cross aid truck was blocked by a local militia band, Dr. Hawa rolled up her sleeves, walked out there alone, stood between the militia and the Red Cross trucks, and told those jerkwads she was going to personally take the food to her people – if they wanted to stop her, they were going to have to put a bullet in her. The militia leader protested, Dr. Hawa argued back, shook a finger at them disdainfully, and told them to slow their fuckin’ roles, and when the sun set that night not only had the militia troops allowed the aid to come through, but they personally gave the good doctor’s supply convoy a full military escort all the way to the hospital. 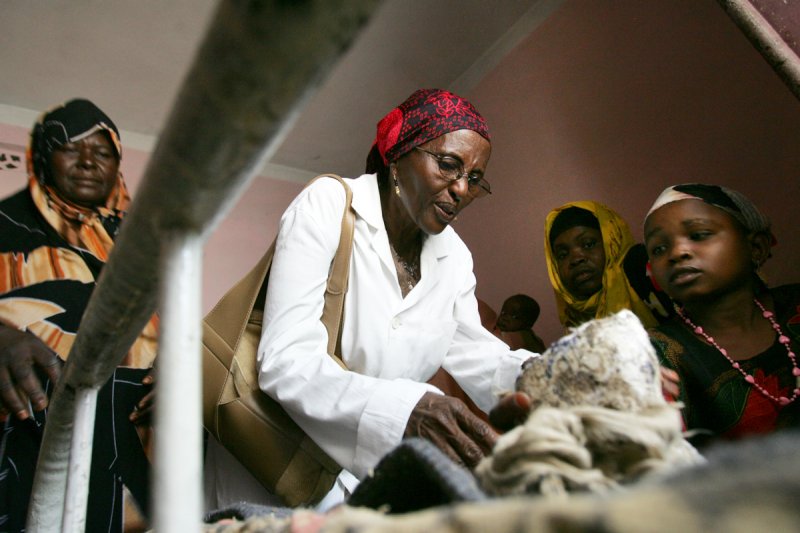 One of the biggest threats to Hawa’s camp came in May of 2010, when a rampaging band of 750 Somali pirate showed up at her front door with AKs, RPGs, and mortar launchers, demanding that Dr. Hawa come out and surrender the hospital. Hawa Abdi, 63, unarmed, walked out there to meet them. She told them to get lost. They said they needed to talk. She invited their leaders to dinner – a pretty generous offer that I have no doubt had all of those assholes’ heads spinning. While they were considering the offer, she sent the word out for the women in the hospital to get their shit together and sneak out as quickly as possible, a move that probably saved a shitload of lives.
At dinner, the leaders of the militia told Mama Hawa that since she was a woman she had no business running anything. She told them, “I’ve been working for the country for the past 20 years. What have you done?”

This didn’t go over well.
The militia terrorist baby-kickers attacked, opened fire with machine guns, mortars, and rocket launchers, shot the place up, looted everything worth looting, broke every generator and piece of medical equipment they could find, beat a bunch of people up, and took the men, women, and children inside prisoner. Dr. Hawa was thrown under house arrest, barricaded in her room by armed guards. They told her to sign the papers and hand over her shit. She told them to get fucked. They told her not to do interviews. She got a cell phone and gave interviews to anyone who would listen.

Between the international media, a national outcry among the Somali people, Dr. Hawa’s own outcry, and a fiery revolt among Dr. Hawa’s imprisoned people that bordered on full-scale rioting, the bullshit militia suddenly started to lose their nerve. They came to Hawa and told her they’d leave and let her run the joint, but only if she signed over the rights to the place to them. She told them to piss off. Then they said they’d leave and let her keep the place, if she’d just get it up and running so that the militia troops would stop getting heat from the media and the populace. She told them she’d only re-open the place if she got a public written apology from the militia leader.

The militia left, she got a written letter apologizing for the damage, rebuilt the place, got the hospital generators back on-line, and went to work saving lives once again. Since 2010 she’s fought off another rebel attack on her hospital, and is currently battling some bullshit attempt by rich fucks to seize her land, but a woman like this isn’t one who’s going to back down from a fight, especially when there are tens of thousands of lives hanging in the balance.

She had been nominated for the 2012 Nobel Peace Prize.

For her lifetime dedication to providing safety and healthcare to 90,000+ internally displaced persons at her camp in Somalia, Dr. Hawa Abdi was honored with the 2013 Vital Voices Global Leadership Awards’ Fern Holland Award. As a trained gynecologist, Dr. Hawa Abdi fights for the women, children and elderly people of the Hawa Abdi Village. With the help of her two daughters, Deqo and Amina, both doctors, she founded the Dr. Hawa Abdi Foundation (DHAF) which provides healthcare, food and shelter to Somalis displaced by famine and civil war.

My patient felt ecstatic when she saw the two dark pink lines on her pregnancy test. She wasn’t surprised when fatigue and...
Read more

“The Most Wanted Man in the World” Interview...

Here is the Article by "SCOTT DADICH" About Edward Snowden Publish on wired.com: "I was in a Russian hotel room, waiting for the biggest photo...
Read more

Four years ago, it came as a big shock to Americans Greg Moran and David Back that India lacked any short-term car rental services....
Read more