Welcome To "The Vernon C. Bain" prison barge which is recognized by the Guinness Book of World Records as the largest operational prison ship in the world.


There are currently somewhere around 800 prisoners floating on the East River, housed inside of the Vernon C. Bain jail barge (named for a warden who died in a car accident). The Department of Corrections uses this to battle overcrowding in the Rikers Island jail complex, and has since 1992 when it built for $161 million. The barge, which was built in New Orleans and brought here, sits approximately one mile west of the SUNY Maritime College (here it is on Google Maps). 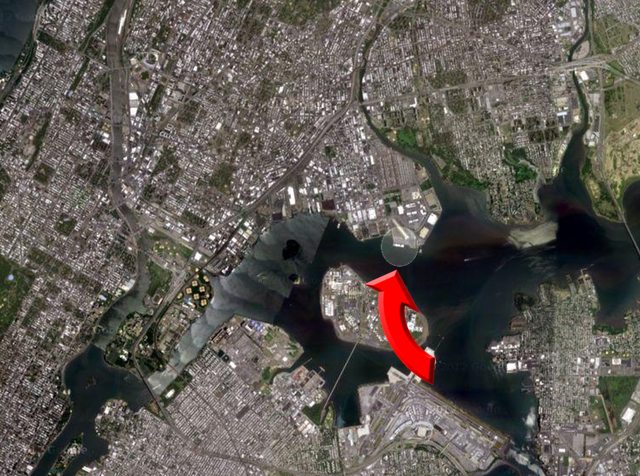 Since it is floating and not permanently moored to the shore, "Coast Guard regulations require that she have 3 maritime crew on board at all time, including a mate, an engineer and an oiler." 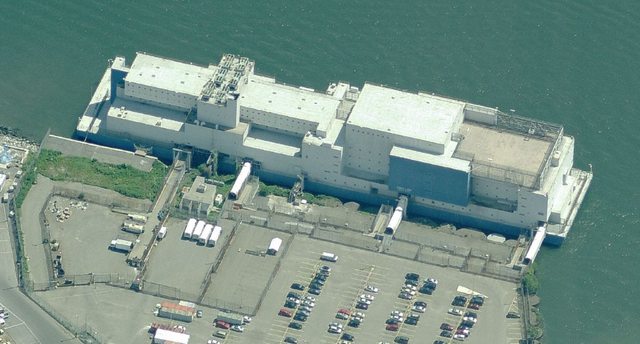 The inmates on board are medium to maximum security, and are contained within 16 dormitories and 100 cells. There's also a law library, recreation rooms, and a basketball court on the top deck! We've reached out to the Department of Corrections with some more questions about this floating prison, and will update when we have more information. 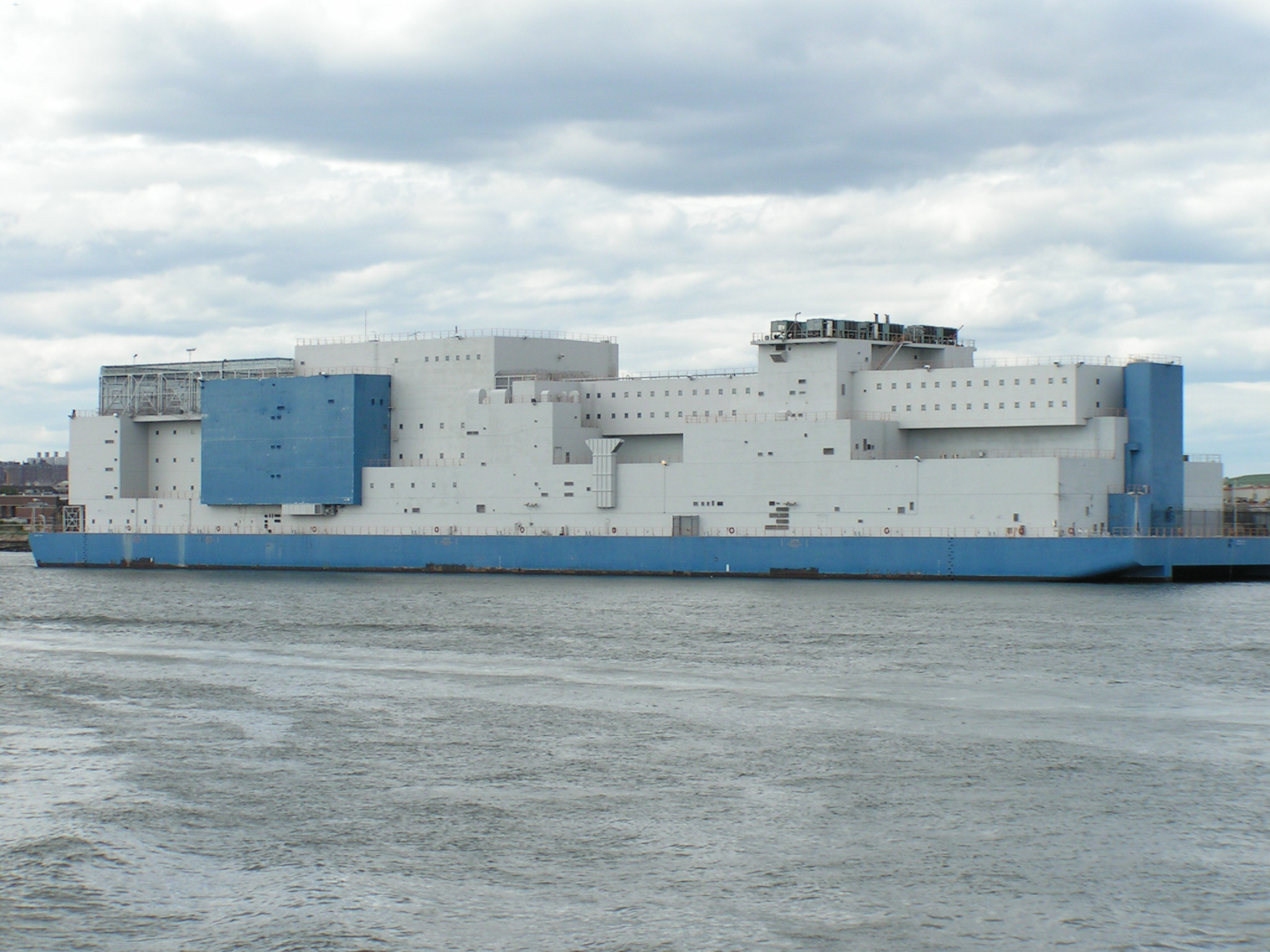 This wasn't the first of its kind in New York City, either… in 1989 (when there was an influx of arrests), the NY Times reported that locals were outraged when the city proposed "to moor a prison barge on the Greenwich Village waterfront for up to five years." Eventually, "the Army Corps of Engineers denied a permanent mooring application and issued a one-year permit instead" for the 386-inmate barge, called the Bibby Venture. At the time of their report, it was sitting abandoned and waiting to be transported to Pier 40 on the Hudson River. It is currently listed on the DoC's website as being closed, but when it was open it was referred to affectionately by inmates as the Love Boat—one NY Times article painted the scene:


''We live large on the barge,'' declared an inmate, Angel Velazquez, 37 years old, who smiled as he stood on the sunbaked recreation deck watching other prisoners play a loping game of basketball as a sailboat fluttered by on the water below. 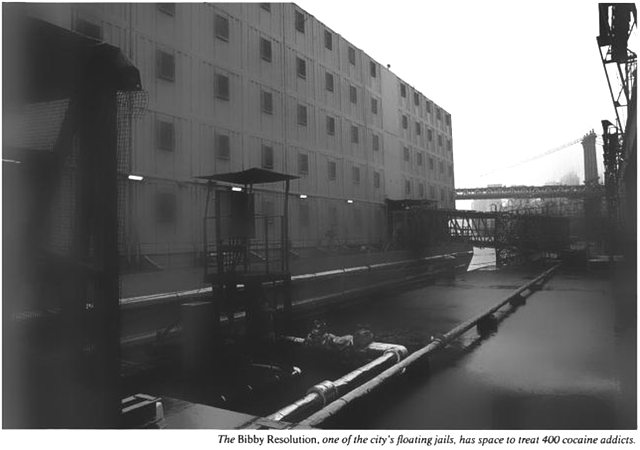 
This barge was later sold to England

The first time a prisoner tried to escape from the Bain happened in 1993, when a 38 year-old prisoner was able to escape while he was supposed to be cleaning ice from the parking lot in front of the ship. The guard who was responsible for the inmate was suspended without pay due to the incident.
Prior to 2002, an inmate tried to escape from the prison's recreation area by climbing the 30-foot fence equipped with razor wire. The guards' uniform boots prevented them from climbing the fence in pursuit, so they threw basketballs at the inmate to stop his escape, but he was able to successfully climb over it. He dove into the East River, where he was promptly picked up and returned by a police watercraft that was dispatched to the scene.


Another escape occurred in February 2004 when the girlfriend of an inmate gave him a handcuff key. The inmate was handcuffed by one wrist to another inmate, but he was able to, without any prison employee noticing, remove the cuffs and free himself. The inmate was able to cling to the undercarriage of a prisoner transport bus to ride away from the facility. He let go of the bus in the South Bronx and walked away, but was apprehended nearly a month later. Six officers and a captain were given administrative leave due to the incident. The corrections commissioner said the escape was caused by a combination of the inmate's quick thinking and the officers' sloppy work.
In early 2013, an inmate charged with petty larceny successfully slipped out of his handcuffs as he arrived at the Bain Center.

The 625-foot long by 125-foot wide flatbed barge is equipped with 14 dormitories and 100 cells for inmates. For recreation, there is a full-size gym with basketball court, weight lifting rooms and an outdoor recreation facility on the roof. There are three worship chapels, a modern medical facility and a library open to inmate use. The 47,326-ton facility was on the water, so when it opened, a minimum of three maritime crew was maintained under Coast Guard regulations. According to John Klumpp, the barge's first captain, in 2002, "the Coast Guard, after years of monitoring the prison barge, finally accepted the reality that that it was, de facto, a jail and not a boat. The prison ship is located approximately one mile away from SUNY Maritime college.

It’s not easy to be happy. We all know that. But when your default setting is to always think of everything with a way...
Read more

Cute and innocent demands of a 5 year old girl....You will just laugh out and enjoy the reactions of this girl Sadie and her...
Read more

Superdstar Mahesh Babu as "Encounter Shankar" - Hindi version of High Action Telugu Movie - "AAGADU" Hold on to your breath as the most desirable...
Read more

Why Do Japanese Sleep So Much on Trains...

Here We are Trying to find out an answer of this question: Why Do Japanese Sleep So Much on Trains ? Tokyo trains - clean,...
Read more

She is cute, She is talented & She is strong too. This Strong Young Girl Are Changing the Face of Girl Power As We...
Read more

The medical profession has recognized healthful and nutritive properties in wine for thousands of years. Recent archeological evidence shows wine was in use as...
Read more
Load more