Next time you are stuck in traffic, don't feel too sorry for yourself. You could be stuck in a Chinese traffic jam–which can last for an entire day. Or ten. That's how many days drivers got stuck on China Highway 110 outside of Beijing in August 2010. Traffic on China's roads grows 40% per year, with road expansion happening constantly. In fact, that's what caused the jam: too many large trucks carrying construction supplies for traffic-easing projects. Instead, the mother of all traffic jams was born, with bumper to bumper cars stretching for 62 miles or 100 KM.

During the 11 days drivers were stuck, vehicles progressed less than a mile per day. With the drivers stuck in a nightmare, locals turned it into a business opportunity. Vendors walked up and down the traffic stretch selling food and water. Instant noodles were going for four times their usual price, and the hot water to cook them was marked up 1000%! The more thuggish vendors broke windshields with rocks if drivers didn't buy from them. Drivers turned off their cars and sat under trucks for shade while dozing or playing cards. A few times per hour they would start their engines to move a few feet down the road. I don't know about you you, but my first thought when I read this was Dante's Inferno. My second thought: bathrooms?

Every car enthusiast should know that: China is a great automotive market and will remain so as long as more and more manufacturers are attracted by cheap labor costs and state incentives.

But the downside of this breathtaking boom is actually the continuously increasing number of cars that reach the public roads in China. If we are to trust the estimates, no less than 7 million cars are expected to be on the road by 2015 in Beijing. What’s more, nearly 14 million cars are purchased each year, while 650,000 vehicles meet the road every month. It’s like saying: “hey, everybody in Beijing must have a car. No, make that two!”. 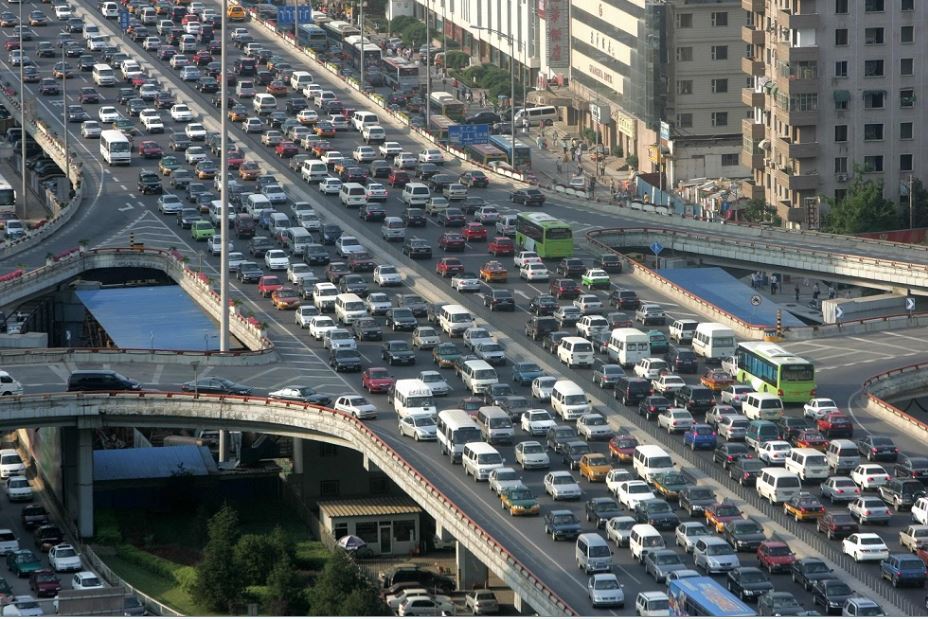 Authorities have tried to stop residents from buying so many cars, mostly in an attempt to reduce pollution and ease traffic, but their efforts are almost useless. Beijing drivers for example must leave their cars at home one day per week, based on a scheme that involves the last digit of the number plate, again in an effort supposed to ease traffic on Chinese roads. Still, local reports claim that the daily Chinese driver spends two or three hours per day in traffic, just because of the huge number of cars.

Well, the inevitable has happened in the end and it’s hard to find someone to blame. Back in August 2010, China was crowned the unofficial “host” of the mother of all traffic jams,  with a huge car panorama that stretched for more than 62 miles (100 km) and lasted for 12 days.

The traffic jam was caused by trucks carrying coal to Beijing and unofficial sources claim that each vehicle moved with the insane speed of 2 miles per day!

It all happened on the Beijing-Tibet Expressway near Beijing and, ironically, the cause of the huge traffic jam was the road work on the highway. Trucks carrying construction supplies to Beijing, most of them supposed to be used on the expressway in order to ease traffic, were blocked at the exit, thus causing a traffic jam that lasted over 12 days.

The highway was initially designed to be used exclusively by trucks, but due to the growing number of vehicles, passenger cars started using it too.

Since we’re talking about China, there are no clear statistics concerning the number of stranded drivers, but instead reports published on the web at that time claim that some of the cars advanced with a speed of 2 miles per day! That’s insane, we know, but such a huge gathering had some positive effects for the local region.

For example, those hoping to become the Chinese version of Donald Trump had a chance to make a name for themselves by selling food and water to drivers. Obviously, prices were shockingly high and some of the drivers even refused to buy the goodies, in which case they were robbed or even stabbed. But let’s take everything one at a time.

Twelve days in a traffic jam is a lot, that’s pretty clear, and even if some drivers already had bread and cigarettes as a method of precaution, everybody had to buy at least a cup of water.

Of course, the Chinese living in the area tried to take the most out of this unfortunate moment and raised prices as much as possible, with reports claiming that a cup of water cost 3 yuan, which is 0.4 American dollars. If drivers were starving, they had to pay 2 yuan (around $0.3) for an egg, while those who wanted cigarettes were almost ripped off: the price was nearly $8 a packet.

Lorry drivers were the ones most affected though. Water and food were very expensive, but some of them were robbed during the night. What’s more, local residents syphoned gasoline out of their cars while sleeping and one driver even needed medical assistance as he was stabbed in the arm.

In an effort to prevent this ad-hoc road rage, authorities sent more than 400 police officers in the area, but thieves were still hard to stop during the night.

Ironically, nobody wanted to leave and although some of the lorries were carrying fruits and vegetables, drivers refused to take a detour because of the high gas prices.

“We are advised to take detours, but I would rather stay here since I will travel more distance and increase my costs,” a lorry driver told the Global Times, perfectly emphasizing the reason why the traffic jam reached 62 miles (100 km) in the 12th day.

Playing cards was the only effective way to kill time, although doing that for 12 consecutive days is not such a pleasant activity for sure. Others preferred reading, while some spent the spare time sleeping under their lorries, thus trying to stop thieves from stealing gasoline.

Surprisingly, the Guinness World of Records claims that this isn't the longest traffic jam in history. A previous episode that took place in France, spanning from Lyon to Paris, is regarded as the biggest jam ever. it stretched for 109 miles (175 km) and happened on February 16, 1980. The reason? Poor weather and the huge number of cars on the French Autoroute.

Wondering if authorities sent water and food to the area? There are no reports in this regard, but since so many drivers complained about the exorbitant prices of water and bread, such a scenario is very unlikely.

Sadly, authorities expected the traffic jam to last about a month, so drivers who managed to squeeze out from the area after only 12 days were very, very lucky.

As a conclusion, stop whining about the extra 10 minutes you spend in traffic every day when you go to work and just think about the drivers that had to face 12 days in a traffic jam without water, food and toilets. But this doesn’t mean that authorities shouldn’t do something about it – it’s all because of the increasing number of cars and unless carpooling becomes a much more popular programme, such traffic jams could take place everywhere around the globe.

What do you think About This Traffic Jam ? We want to hear from you ! Share your comments below.