The world is changing and not always for the better. The Repeat Photography project tracks the rate of glacier decline in Glacier National Park,...
Read more
Nature

The Alaska State Fair held annually in Palmer, 42 miles northeast of Anchorage, is not your regular agricultural show. Here farmers from the Matanuska-Susitna...
Read more

Alaska is called “The Last Frontier”, because of its opportunities and many lightly settled regions, and the “Land of the Midnight Sun”, because the sun shines nearly around the clock during Alaskan summers.

As Alaska is big, so too is its beauty. A vast, uninhabited wilderness overwhelms the comparatively small cities in the state, such as commercial-minded Anchorage and tucked away Juneau (a curious state capital with no road access). This natural beauty can be enjoyed while hiking, paddling, and fishing in the great outdoors, especially as the state and national parks here are some of the largest in the United States.

On March 30, 1867, the United States agreed to purchase Alaska from Russia for $7.2 million dollars, about two cents an acre; "Seward's Folly" many called it, after Secretary of State William H. Seward. A check for $7,200,000.00 was issued on August 1, 1868 and made payable to Edouard de Stoeckl, the Russian Minister to the United States.

On January 3, 1959, Alaska, with a land mass larger than Texas, California and Montana combined, became the 49th state in the union. It is a large state, 1/5 the size of all the other states together, reaching so far to the west that the International Date Line had to be bent to keep the state all in the same day. It's also the only U.S. state extending into the Eastern Hemisphere.

In Alaska, the "family car" has wings, vegetables and fruit grow to two times their normal size and moose interrupt golf games when they feel like it.

The name "Alaska" was used by the Russians to refer only to the peninsula. This name was used by the United States to refer, first to the entire territory, and then, to the State after its purchase in 1867.

The name "Alaska" is taken from the Aleut word "aláxsxaq" that refers to an object to which the sea is directed, in this case the Alaska peninsula and mainland. This is sometimes loosely translated as "great land." People who live in Alaska or who come from Alaska are called Alaskans.

Though there are a number of museums and other tourist attractions in the major centers, towns are perhaps more accurately used as jumping-off points for exploring the Alaskan wilds such as Denali and Kenai Fjords national parks. But wherever your sightseeing may take you, the scale of Alaska is sure to impress. In the northern part of the Alaska Range, Denali National Park is the one of the largest in the United States and encompasses North America's highest mountain. Denali is the 20,320-foot peak's traditional name, but modern explorers dubbed it Mount McKinley. The name is a strong point of local contention. But names aside, the six million acres of wide river valleys, tundra, high alpine ranges, and glacier-draped mountains are purely spectacular. A single road leads into the park, and only park-approved buses are permitted to travel beyond Savage River. Views of Denali can be enjoyed from the park road, weather permitting.

Located midway between Anchorage and Fairbanks, Denali is the home of grizzly bears, wolves, reindeer, elk, and other animals. More than 167 species of birds have been recorded in the park. Another favorite among the park's many things to do are the Sled Dog Kennels, which offer demonstrations and are home to dozens of energetic huskies. 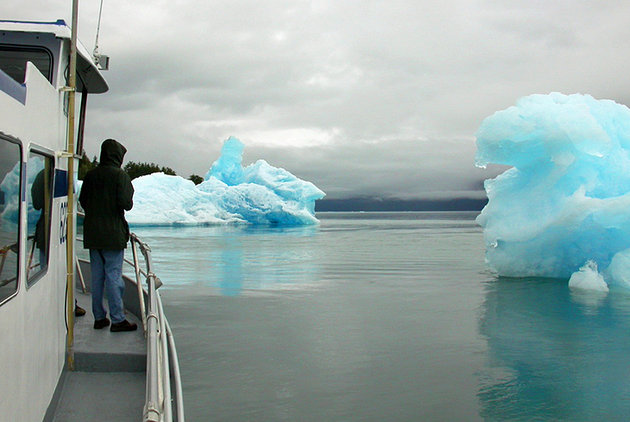 A fjord edged with glaciers, Tracy Arm is located south of Juneau and is a popular destination for cruise ships and boat tours. Waterfalls tumble down the sharp rock walls and glaciers calve, creating small icebergs. The scenic setting lies within the bounds of the Tongass National Forest. At the head of the fjord sit the twin Sawyer Glaciers. Wildlife sightings are common on tours, whether it's a brown bear or moose on land, or the whales and seals that inhabit these waters. 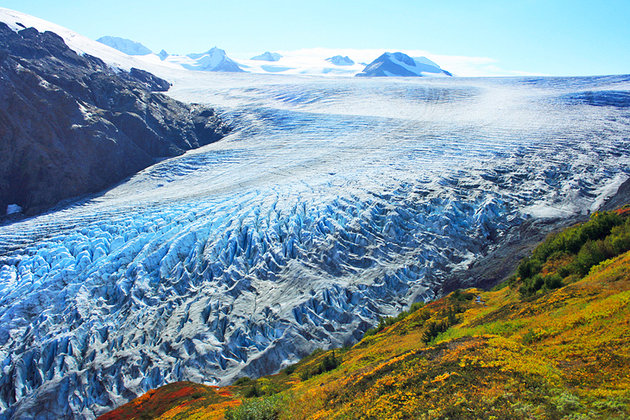 Protecting much of the fjord-riddled coastline of the Kenai Peninsula (south of Anchorage), this national park offers some of the best sightseeing in Alaska. Not only do panoramas take in the many glaciers of the Harding Icefield and an uninhabited coastline, but the national park is home to monstrously large brown bears that feed on the fat-rich salmon. Many tourist options converge in the surrounding areas, be it the end of Hwy 1 in Homer, or the terminus of the Alaska Railroad and access to the Exit Glacier, both in Seward. 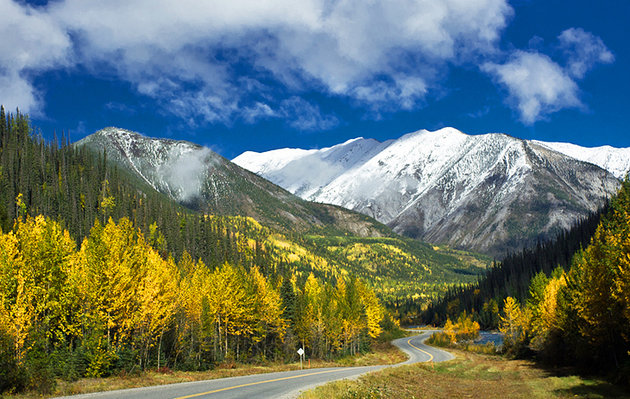 The Alaska Highway runs from Dawson Creek in British Columbia (Canada) through the Yukon Territory to Fairbanks, in the center of Alaska. It was built for military purposes in 1942, during WWII, in the record time of only eight months. But since the end of the war, the route has been the most important means of access by land to the Yukon Territory and southern Alaska, and a favorite with recreational vehicle travelers. The highway passes through Whitehorse, Canada before crossing the international border into Alaska and ending in Fairbanks. Motels, shops, and gas stations lies at intervals of 30-50 miles.


5. University of Alaska Museum of the North 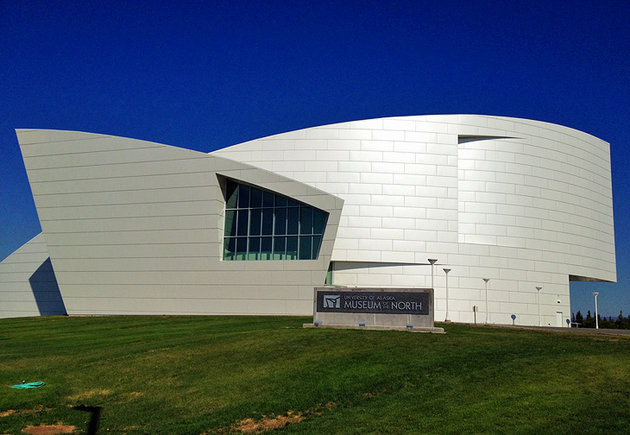 Located in Fairbanks, the University of Alaska Museum of the North offers well over one million historical artifacts and natural history pieces. The permanent collection includes ethnological items made and used by indigenous groups, a fine arts collection that focuses mainly on Alaskan art, archeological finds from prehistoric cultures, a bird collection, and paleontology specimens.

The building that houses the museum is also noteworthy. Designed by Joan Soranno, the white structure features interesting lines and curves intended to resemble the Alaskan landscape. 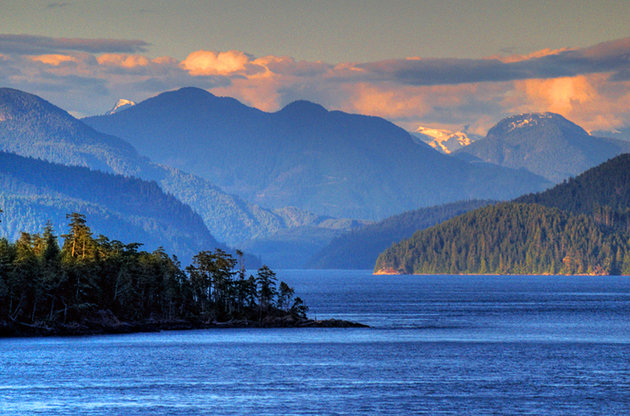 The most popular way to visit the Inside Passage is to cruise through the fjords on large ships, charter boats, and private yachts, or to stop off the highway at Haines, Skagway, or Hyder. This section of southeast Alaska offers incredible scenery of glaciers, mountains, and ocean, and is home to an abundance of wildlife. The area is also inhabited by the Tlingit, Haida, and Tsimshian peoples.

Along the coastal passage, the Tongass National Forest covers 17 million acres and includes islands, mountains, glaciers, ice fields, fjords, and waterfalls. Included in the forest is Prince of Wales Island, one of the largest islands in the US. Major towns along the route include Skagway with its Klondike Gold Rush National Historical Park, the once-chief town of Russian America Sitka, and Ketchikan, where stoic totems are on display at both Totem Bight State Historic Park and the Totem Heritage Center. 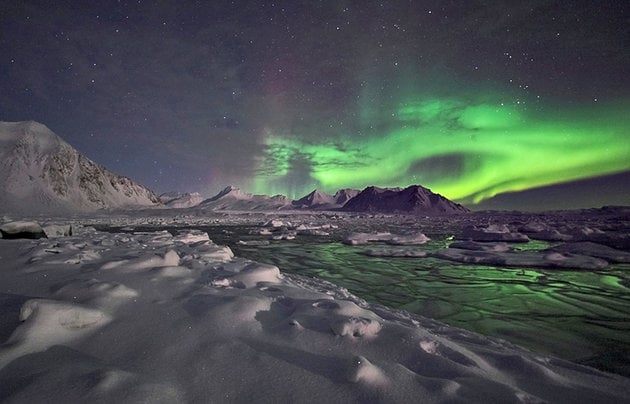 One of the up-sides to Alaska's long dark winters are the glowing Northern Lights that appear on many nights from September to mid-April. Some of the best aurora borealis viewing happens in the Fairbanks area. The peak time to watch for solar particles in the earth's magnetic field is after midnight. Joining an aurora tour can help keep sightseers warm in this frigid season. 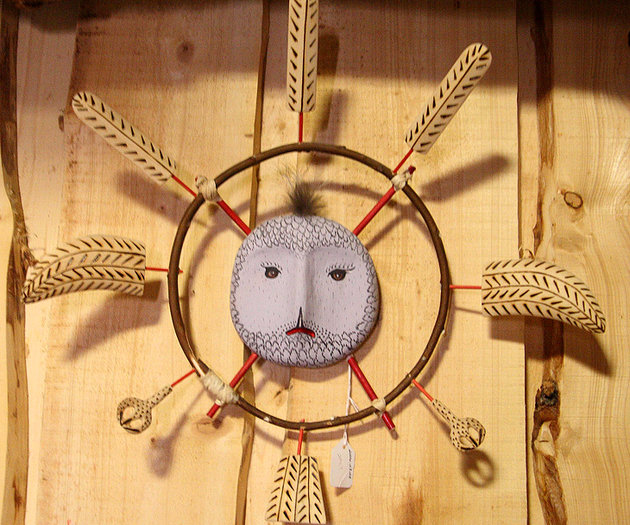 Traditional dwellings of some of Alaska's native peoples surround a lake at the Alaska Native Heritage Center in Anchorage. Cultural guides demonstrate crafts and artworks and perform dances and songs. Though the sightseeing attraction is located out of downtown, there is a summer-season shuttle from the modern Anchorage Museum at Rasmuson Center.

Wrangell-St. Elias National Park is the largest and most magnificent of Alaska's sprawling national parks, with nine of the 16 highest peaks in the United States. This grandiose mountain region on the frontier with Canada contains numerous glaciers, lakes, and mountain streams and is home to a rich variety of wildlife. It is superb country for climbers, walkers, and water sports enthusiasts. And the park's Kennecott Mines National Historic Landmark gives insight into the one-time mill town with barely preserved heritage buildings and abandoned mines. 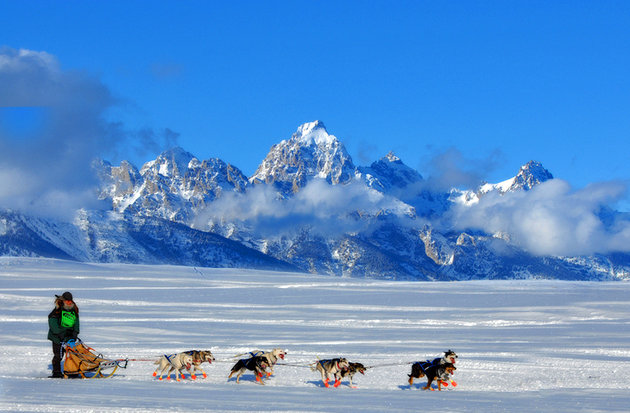 The Iditarod National Historic Trail consists of a network of trails totalling more than 2,300 miles between Nome, on the Bering Strait, and Seward, near Anchorage. Originally used by ancient hunters and later by gold prospectors, the trail is now used, and best known, for the Iditarod Trail Sled Dog Race. Although it is primarily a winter trail, hikers do use sections during the summer months. 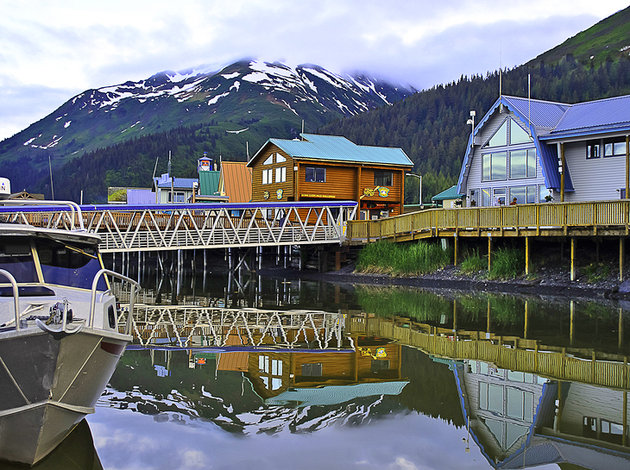 The journey to Seward is equally as alluring as the small town itself. To reach the community south of Anchorage, visitors travel by way of the Seward Highway, Here, along the shoreline of Turnagain Arm, stretches of the rugged Chugach State Park meet the saltwater. Or tourists can take the scenic Alaska Railroad. Beside the appeal of the town's excellent Alaska SeaLife Center, Seward is a base for exploring Kenai Peninsula attractions, such as Exit Glacier, and area fjords by boat. 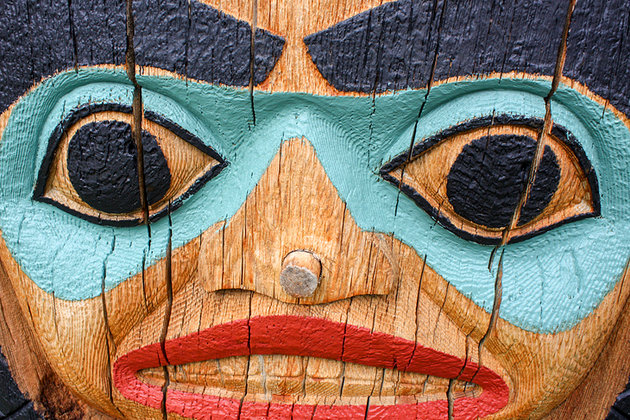 In 1938 the US Forest Services began a project to salvage, reconstruct, and create totem poles – a tradition which was dying out. Funds were used to hire carvers from among the older generations, and abandoned totem poles were restored or recreated by these craftsmen. And, in the process of this work, they were able to pass on their skills to younger community members.

Fourteen poles were erected in Ketchikan's Totem Bight State Historic Park, now listed on the National Register of Historic Places. Also on the site is a recreated clan house from the early 19th century. There are more heritage totem poles and local details available at the town's Totem Heritage Center. 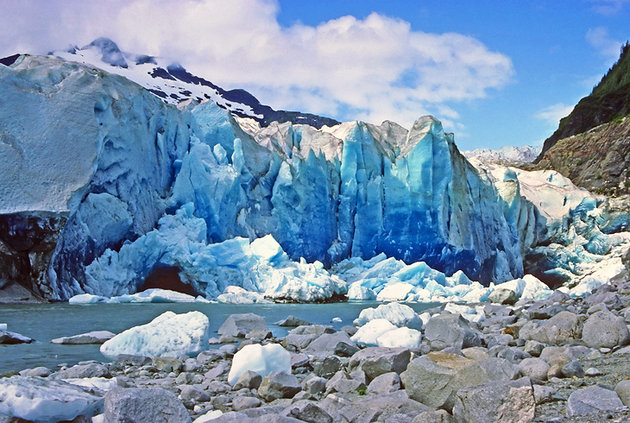 Located just 12 miles northwest of the state capital and accessible by road, the Mendenhall Glacier snakes down from the Juneau Icefield to touch the shores of a small lake. A visitor center looks out over both the glacier and the iceberg-dotted waters, while trails venture along the shore to roaring Nugget Falls as well as the impressive ice mass. Rafting and kayaking trips allow visitors to float among the bergs. 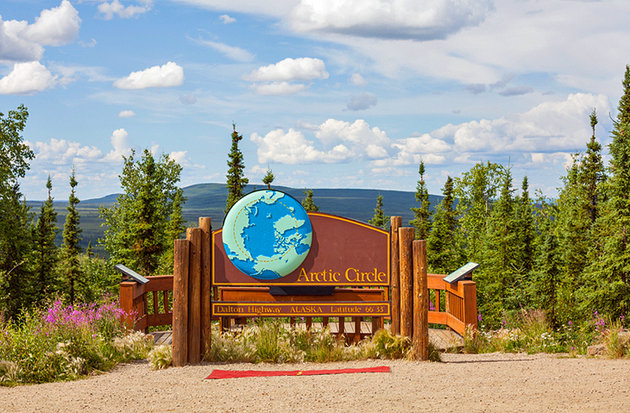 At 66 degrees 33 minutes latitude, you reach the imaginary line of the Arctic Circle where the summer solstice brings 24 hours of daylight and the winter means 24 hours of darkness. Some visitors take day trips or longer tours to the alpine tundra by air or by land on the Dalton Highway, often out of Fairbanks. Journeys also take in the Trans-Alaska Pipeline, which runs (like the Dalton Highway) up to Prudhoe Bay on the Beaufort Sea. The White Pass & Yukon Route Railway leaves from Skagway, climbing up to White Pass at a 2,865-foot elevation. The depot, one of Alaska's oldest, houses the visitor center.


What do you think About This List ? We want to hear from you ! Share your comments below.

Here are 30 Dogs that have better hair...

Grooming our-self is awesome, fun and pampering. But if you see these dog's hairstyle, you might start shaming on your hairstyle....
Read more

How Good Are You At Reading People?

Are you able to accurately read other people's emotions?
Read more

By the end of the Western Roman Empire, the town was known simply as Parisius in Latin and would later become Paris in French.Christianity...
Read more

A lady’s makeup just above imagination.

Known as the super fruit, Guava can hardly be missed out in its season. Guava is relished by one and all, not only for...
Read more
Load more