Every city has its landmarks and famous sights. Paris has its Tower and London its great clock, but Brussels is a little different. One of the most famous attractions in the city isn’t a remnant of a World’s Fair or an architectural marvel, no it’s a trio of oddly placed peeing statues.

The statue that most people know and the replica of which sits in gardens around the world is the fountain known as Manneken Pis. There are a lot of myths and legends associated with the boy statue/fountain and they form along two clear lines: victory in battle and rebellious spirit. Some say that it represents a boy lord who vanquished his foes (well, his troops did) or a young boy who managed to save the city with his urination. The other line, rebellious kid, revolves around a parent losing track of their child and finding him in various areas around town peeing. His fame though most likely comes through a more prosaic chain of events. Since the fountain was a central water source for a few hundred years, generations of Belgians grew up “getting to know” Manneken Pis and his whimsical ways and he gradually found himself the star of several myths and legends. 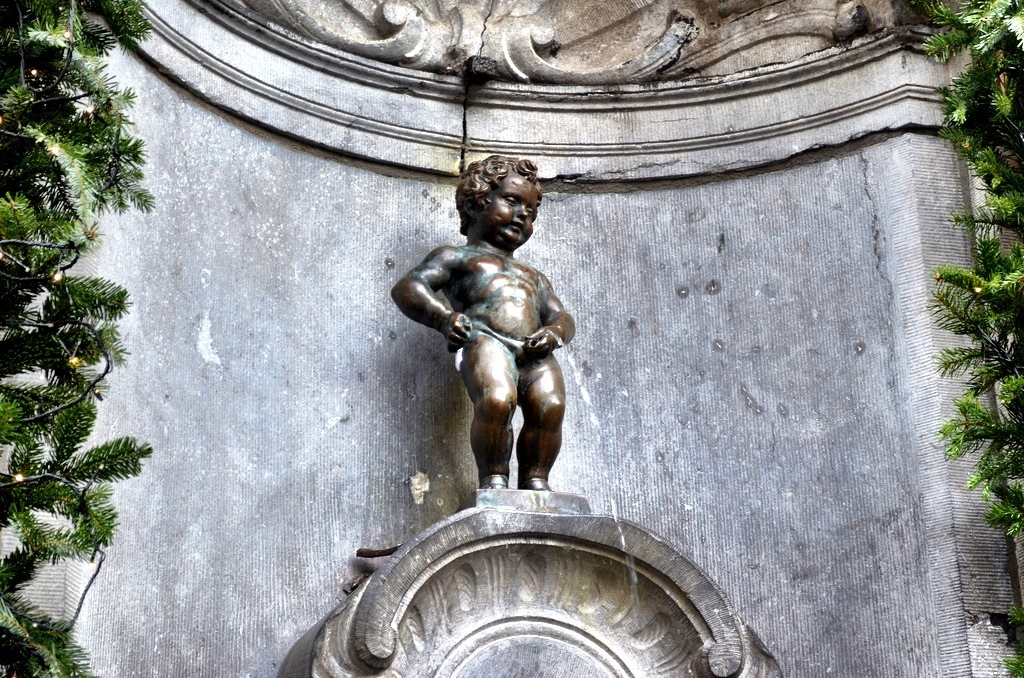 One of the most iconic symbols of Brussels is not a majestic bridge or a tower or a cathedral, but a tiny statue of a little boy happily pissing in public. If you have ever been to the Belgian capital, chances are you’ve seen Manneken Pis – the bronze statue of a boy peeing into the fountain’s basin. Manneken Pis is the city’s most famous attraction and visited by hundreds of tourists every single day. But not many of them are aware that the little boy is not alone – he has a family, consisting of a sister and a dog, and they all seem to suffer from the same problem of relieving themselves in public.

Since it’s one of the most famous tourist stops in Brussels, Manneken-Pis is fairly easy to find. On your trusty map locate Rue Lombard (it’s not far from the Grand Place) and turn left on Rue de l’Etuve. The swarm of tourists will reveal the location of the tiny mascot of the city, on the corner almost hidden away.

The peeing boy isn’t alone though, he now has an extended family thanks to some enterprising artists. Manneken Pis has graced the streets of Brussels since the 1600s, but it wasn’t until the 1980s when he finally got a little sister. Jeanneke Pis is a fountain like her big brother and is confoundedly located in the recess of a wall, hidden behind red bars. To find Jeanneke, head to the Impasse de la Fidelite, a narrow cul-de-sac near the popular Rue des Bouchers. 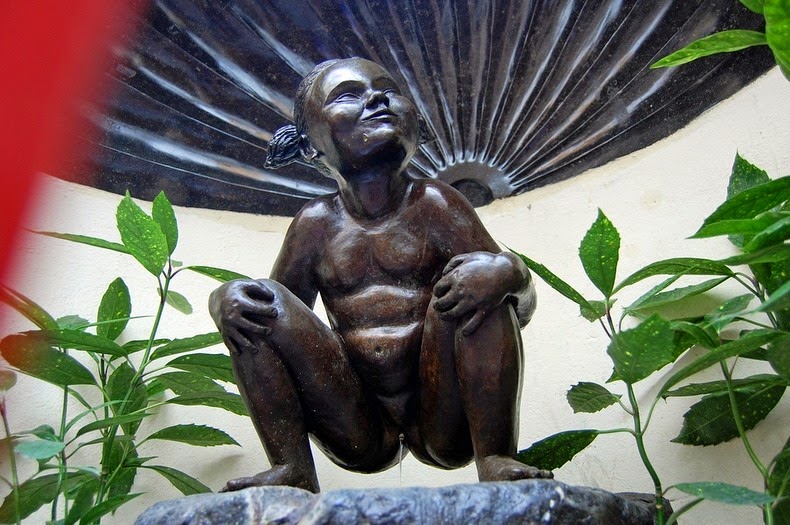 The famous statue is located at the junction of two streets, close to Grand Place. The statue is just two feet tall and was placed there in 1619 by the sculptor Hieronimus Duquesnoy. Some say the statue represents a young boy who urinated on a burning fuse and thus managed to save the city from destruction. Another story revolves around a wealthy merchant who lost his young son and eventually found him happily urinating in a small garden.

Part of the reason why people visit this little figure so frequently is its enormous wardrobe of costumes. The statue is dressed in tiny costume several times each week, according to a published schedule which is posted on the railings around the fountain. His wardrobe consists of several hundred different costumes, many of which may be viewed in a permanent exhibition inside the City Museum.

Manneken Pis dressed as (from left to right): Mozart, a pilot, Nelson Mandela and a Russian cosmonaut. Photo credit

Jeanneke-Pis was the gift of a local who wanted to give his beloved neighborhood a present it would always remember. Thus was born Jeanneke-Pis whose presence is about much more than just gender equality, it’s about philanthropy as well. Thousands of people toss coins into the fountain for their chance to get their wishes granted. What they don’t realize is that they are helping answer other people’s wishes since the coins are all donated to cancer research. Oddly though poor Jeanneke isn’t nearly as well known as her brother and it can take a little effort to find her well-hidden home.

Jeanneke though is a comparative rock star given how hard it was to find the third member of the Pis family, Zinneke Pis. I’m a dog lover and can well appreciate the fact that no family is truly complete without a family pet, in this case it’s a peeing dog. Zinneke-Pis, which can be found at the corner of Rue des Chartreaux and Rue de Vieux-Marche is the Pis family pet. The bronze pup has been modeled with leg lifted, doing his business just like Manneken and Jeanneke. Unlike the other members of his family though Zinneke isn’t a fountain, just a well placed statue. Designed in 1998, it’s the newest member of the family and while technically close to the center of Brussels, it is a challenge to actually locate. Determination is well rewarded though when you stumble upon this cutest member of the Pis family. 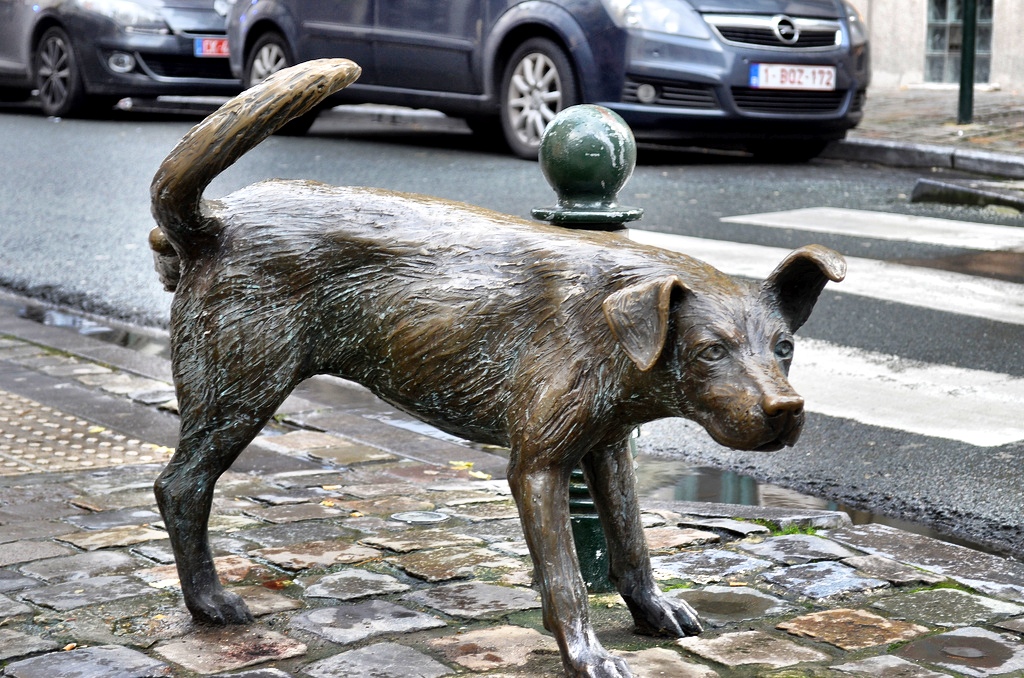 Jeanneke Pis is Manneken Pis’ little sister, a half-metre-high statue of blue-grey limestone of a little girl with her hair in short pigtails, squatting over a fountain doing her business for the world to see. It’s a fairly recent addition to the city, erected in 1987, because of which Jeanneke Pis remains mostly unknown to travellers who do not live in Brussels. The sculpture is now behind iron bars to protect it from vandalism.


The third member of the Pis family is the dog, Zinneke Pis. The bronze sculpture can be found at the corner of Rue des Chartreaux and Rue de Vieux-Marche, lifting his leg and doing his business just like Manneken and Jeanneke. Unlike the other members of his family though Zinneke isn’t a working fountain. It was erected in 1998. 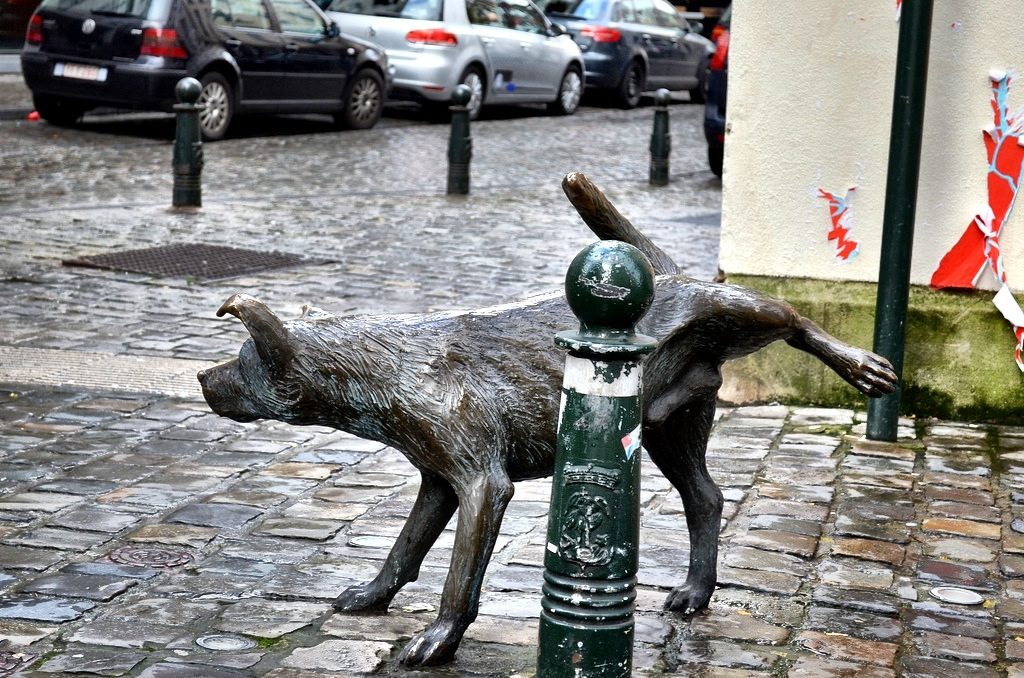 I love Brussels and could return again and again and never get tired of it. One reason I love it is because of the spirit of the city, traditional with a slightly ironic edge. Nowhere are these character traits better seen than through the three peeing statues of the city. Are they silly and sometimes a tourist trap? You bet, but it’s a fun way to see more of the city and a great story to share with friends.