Migingo Island – Smallest & Most Populated Island In the World

Migingo Island is one of the most densely populated islands in the world. In the middle of Lake Victoria, it’s home to Ugandan and Kenyan fishermen and their families. Although tiny in size, the island is home to 1000 people living in crammed huts made of corrugated sheets and wood. RT Doc’s Peter Scott paid a visit to find out how more than a thousand people live on a rock half the size of a football pitch.

Migingo is a small island in East Africa’s Lake Victoria, the world's second largest fresh water lake, bordering Uganda, Tanzania and Kenya. There’s a sovereignty dispute over Migingo Island between Uganda and Kenya but while the governments of the two countries may argue over the tiny piece of land, both Ugandan and Kenyan fishing families live here peacefully side-by-side. 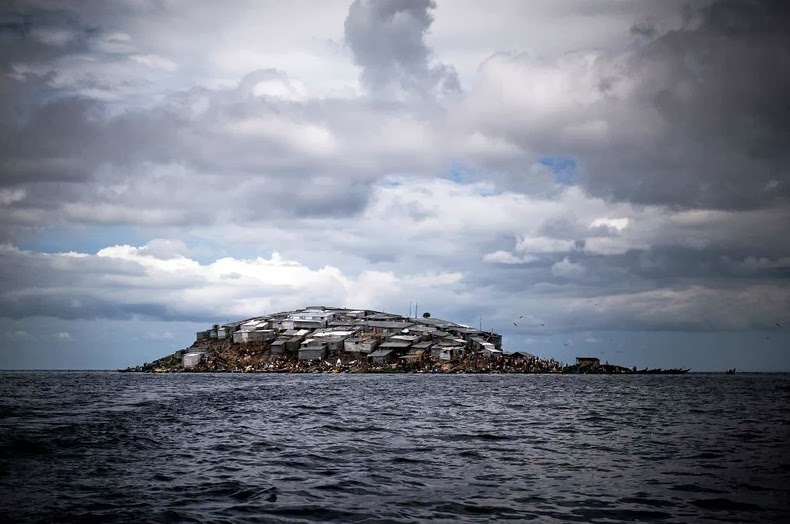 Migingo life is dictated by the catch and that varies depending on many factors. Beyond nature, one of the main dangers for the fishermen, and their catch, is local pirates. They’ve been known to rob and even kill their ill-fated victims, making the lake a dangerous place to work. 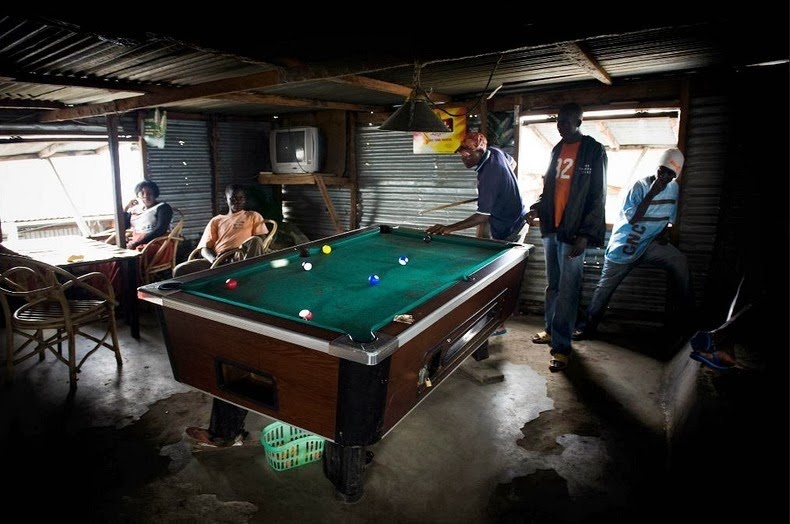 Even though the island is roughly half the size of a football pitch, it has everything a town needs. Despite shabby living conditions, Migingo Island boasts of five bars, a beauty salon, a pharmacy as well as several hotels. It’s a close community, literally, where they’ve learned a few things about effective space management. 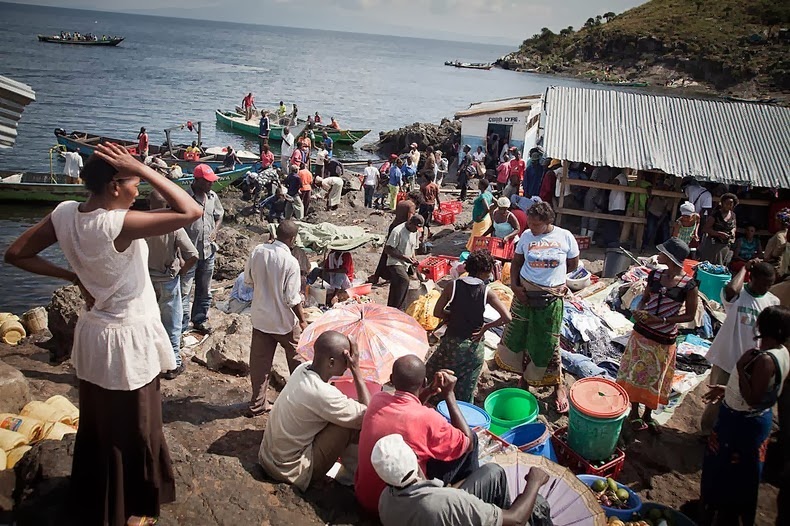 At first, Migingo was described to Peter as a hostile and dangerous place, where strangers weren’t welcome, but that myth was soon dispelled when the islanders proved to be hospitable hosts, eager to talk and happy to share their memories of the island and their opinions about its future. 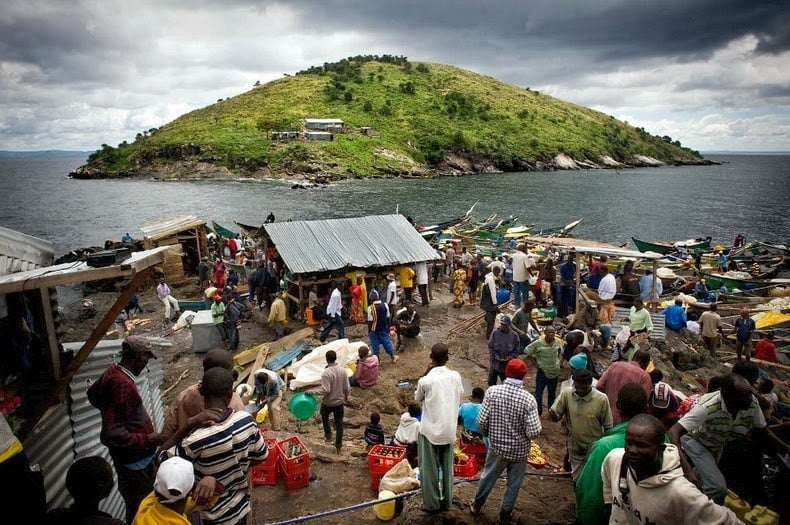 Most of island’s inhabitants are fishermen and fish traders. The first to arrive were two Kenyan fishermen, Dalmas Tembo and George Kibebe, who claimed to have settled there in 1991. At that time, the island was covered with weeds and infested with birds and snakes. They were later joined by 60 members of their fishing group who followed after receiving information that the area was rich with Nile Perch. Subsequently, other fishermen from Kenya, Uganda and Tanzania came to the island turning it into a thriving commercial center.


The island is a beehive of activities as more than 100 boats bring in their catch every morning for weighing and sale to buyers. After being bought by fish processing firms they are transported to the Kenyan mainland, from where it’s exported to the European Union and beyond. The coveted Nile Perch is central to a multi-million dollar fishing industry vital for the economy of Uganda, Kenya and Tanzania.

The rich stock of Nile Perch in the waters around Migingo Island has lead to territorial dispute between the two countries – Uganda and Kenya, both of which lay claim to the island. Technically, Migingo Island belongs to Kenya, being inside the country’s international border and is also marked so on maps and official documents. In 2009, the Ugandan government claimed that Migingo Island is in Ugandan waters and that it is therefore illegal for Kenyans to fish there. 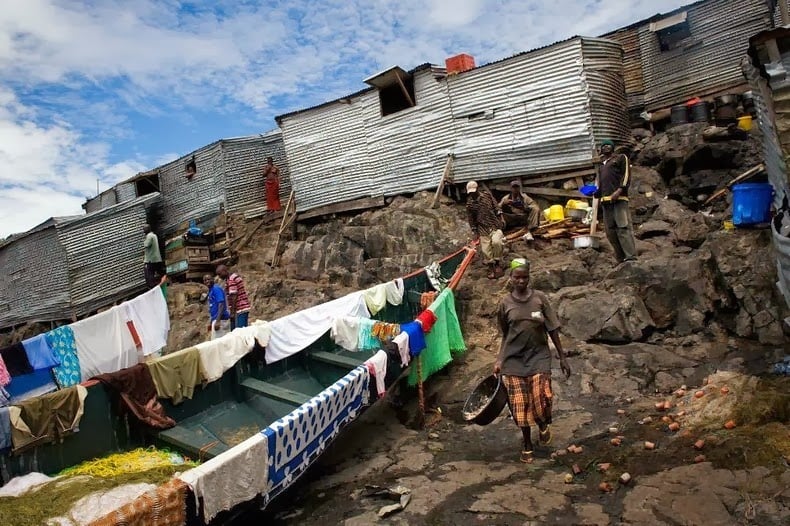 Trouble started when pirates first heard that fishermen were making $300 a day, which was approximately three or four times what many people in East Africa earn in an entire month on dry land, they flocked to the island and stole fish, cash and engines. The fishermen called upon their governments for help in 2009 with the Ugandans being first to respond by sending maritime police. Upon arrival, the Ugandans raised their flag and slowly began to exploit the fishermen who had made their home on the tiny island. Entry permits and taxes were introduced on fishermen that hoped to cash in on the newly discovered fishing grounds. Boats and fishing nets belonging to Kenyan fishermen are regularly confiscated by Ugandan forces for fishing on Uganda’s territorial waters.

The ownership dispute is yet to be resolved. 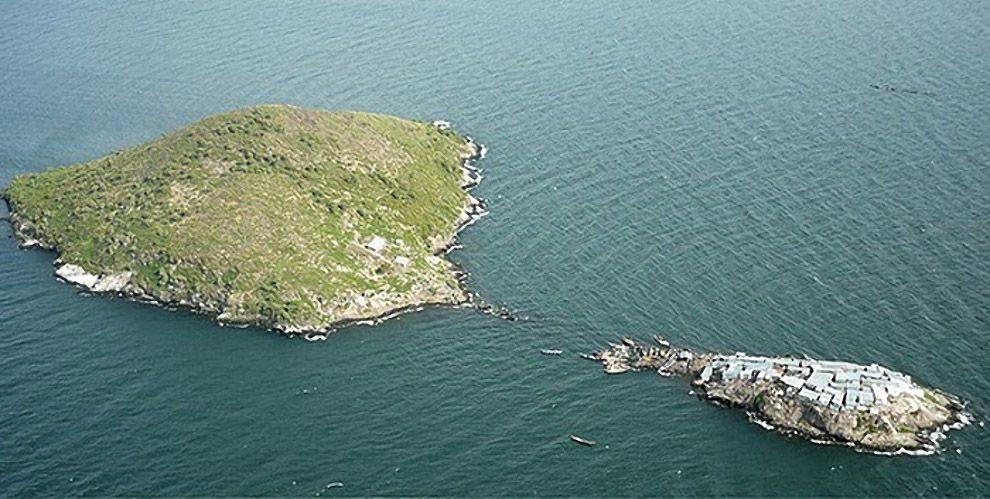 Interestingly, there is a much larger island called Usingo just 200 meters to the east of Migingo Island that remains uninhabited. As per the RT Documentary the other island isn't inhabited because there is no security provided there, but there is security provision on the small island.

These 25 Stunning Photos will Show You What...

Scientists at Facebook have published a paper showing that they manipulated the content seen by more than 600,000 users in an attempt to determine...
Read more

We've seen many Photoshop Battles on internet over the years, from badass hawks and awkward half-cats to naked guinea pigs and superhero squirrels, but...
Read more

20+ Halloween Snacks That Look So Wrong But...

No Halloween house party is complete without some spooky and tasty Halloween treats.   They don't have to be sweet, either – there will be plenty...
Read more

Check out how Elders React To Fifty Shades...

The erotic-romance novel Fifty Shades of Grey took the mainstream by storm. Soon, it seemed everyone was reading the electric book. As expected, Hollywood...
Read more
Load more