Essay writing skills are essential to be mastered by every single student. Especially during these pandemic days since school is online and all you’re...
Read more
Careers

Upskill for a Better Opportunity: Learn Data Science with Python

Ever heard of the idiom “Finding a needle in a haystack”? Would you find that needle if you were asked to? You'd straight away...
Read more

Corporate Lessons to learn from Mahabharata Mahabharata – the epic tale of war teems with lessons that one can draw for our modern-day work life. Be it working with jealous colleagues or being a manager, Mahabharata has many instances from which parallels can be drawn. From marketing, leadership tips to entrepreneurship, Indian mythology can help solve a modern-day executive's many 'dharamsankats'.

Identify What you want to do: –

Who Is Dronacharya: The Mentor. The employee who doesn't like working himself but is always ready to guide and train new joiners. 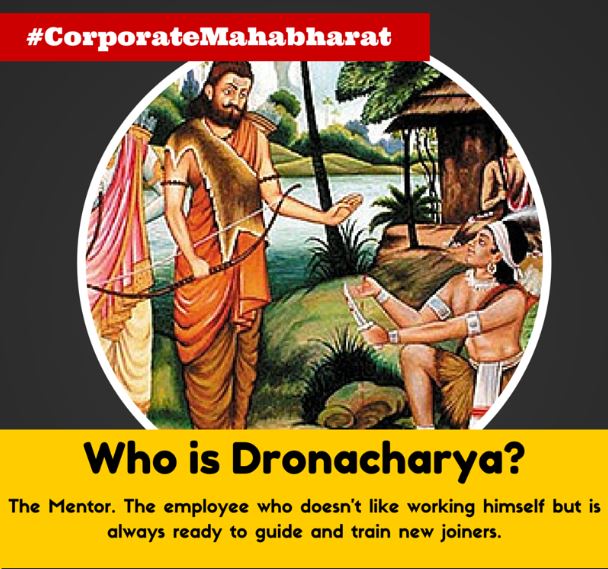 Who Is Bhisma: The Loyal. The employee in a relatively senior position who happily assists the boss in spite of knowing his incompetence (because of some strange oath maybe) 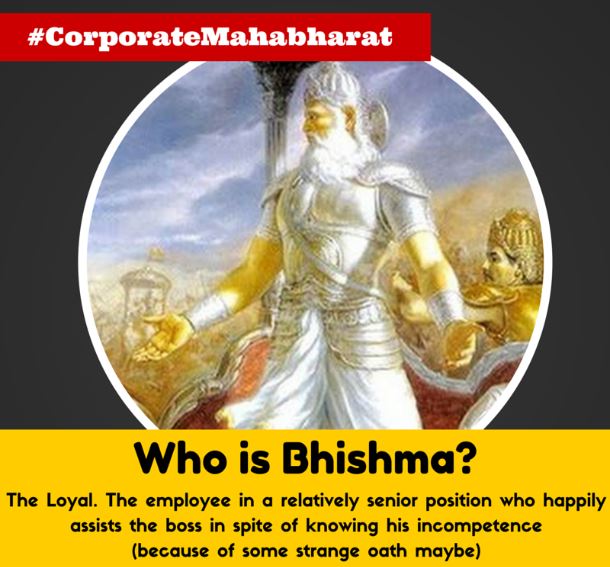 Who Is Dhritarashtra: The blind boss. He knows that everything is wrong with his project but will still let it function, without making any changes to the current processes. 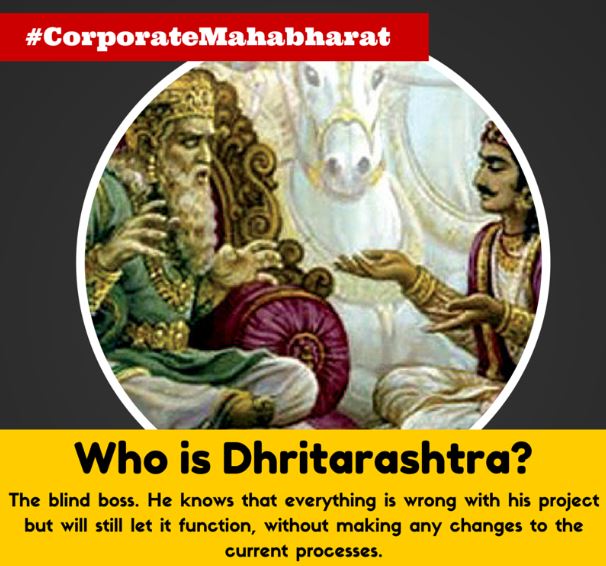 Who Is Gandhari: The Yes-men / Women. Boss's immediate juniors who know that they are a part of an evil plan but will stay blindfolded and pretend as if nothing is happening. 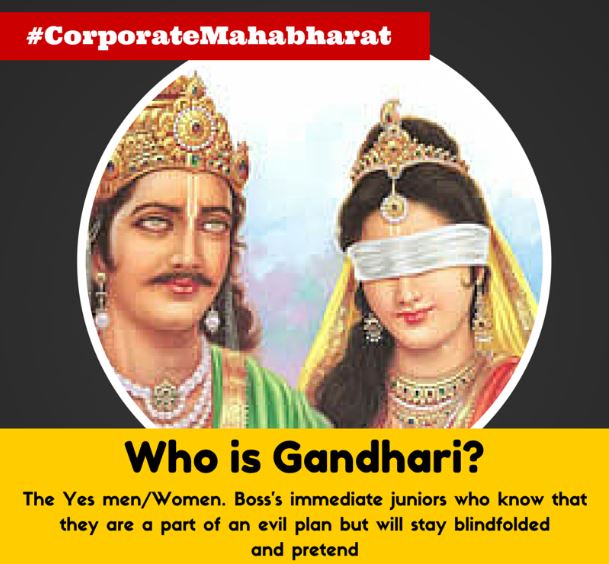 Who Is Yuddhisthira: The ethical guy. Poor chap would never fudge timesheets and call in sick only when he is dying. 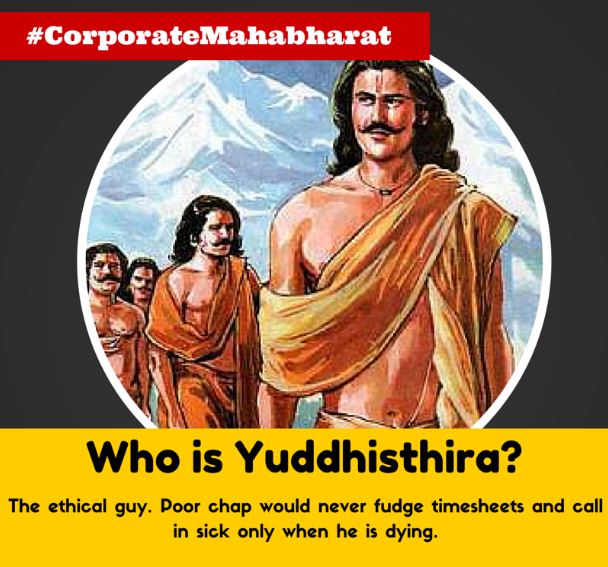 Who Is Bheema: The angry resource. Always ready to pick up a fight with his peers, subordinates or even the bosses. 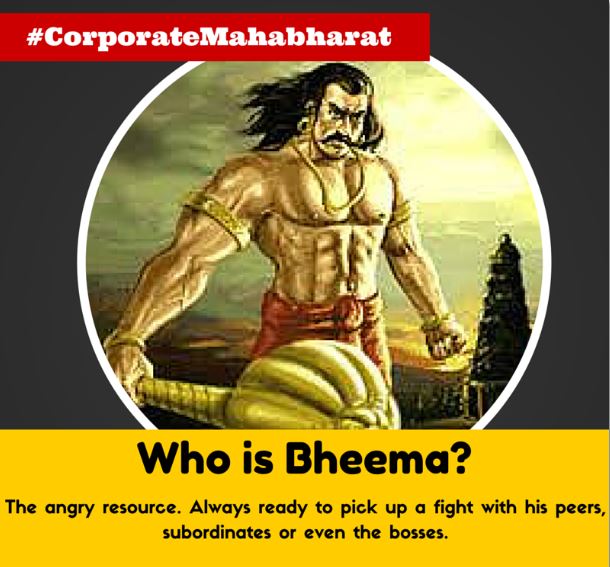 Who Is Arjuna: The cool dude. The star performer who also knows how to sell his skills. A natural charmer, very famous among the ladies. 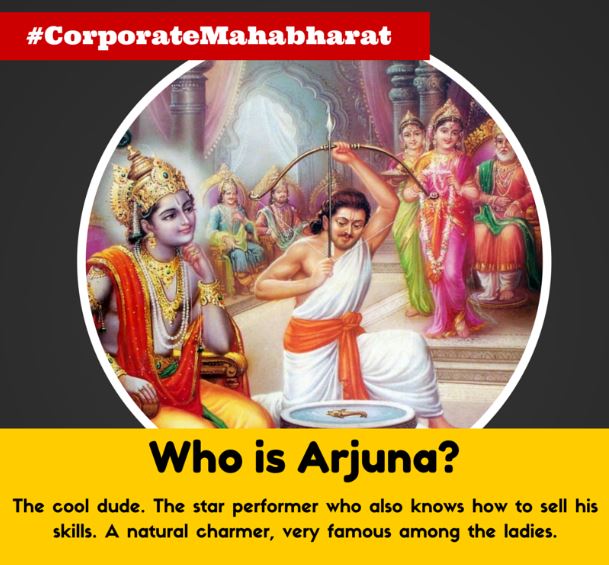 Who Is Nakul & Sahdev: The good average resource. No one notices them. They keep doing their work and get average appraisals. 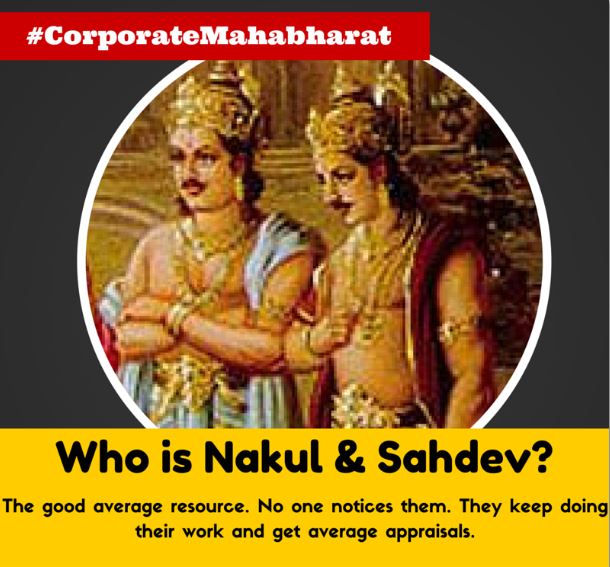 Who Is Karna: The unsung hero. The best performer in the office but never claims credit for his work. Stays an unsung hero for all his life. Girls take him for a snobbish nerd. 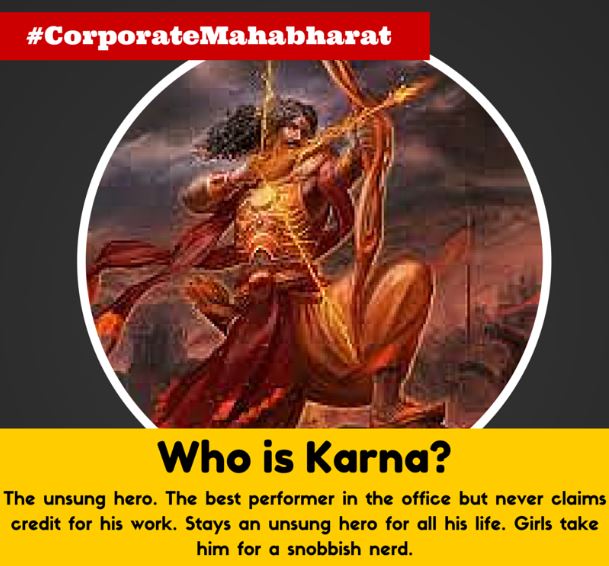 Who Is Duryodhana: The Bully. Knows how to get work done, by hook or by crook. Doesn't mind threatening the likes of Nakul and Sahdev to get his work done. 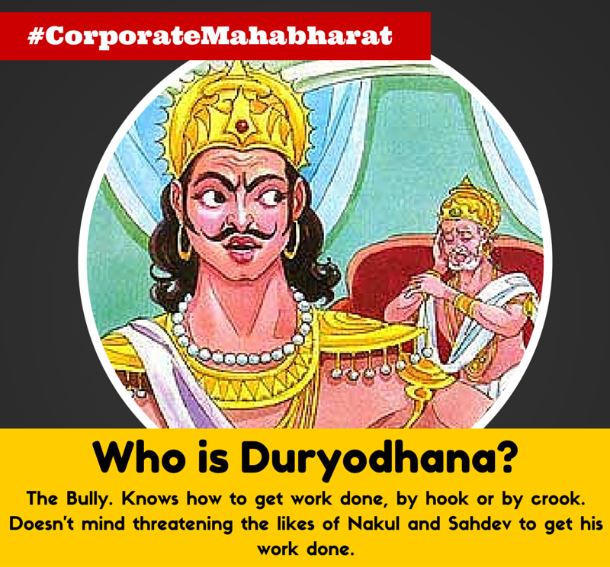 Who Is Shakuni: The evil plotter. Copies management in every mail. Escalates every trivial issue, sometimes to take credits and sometimes purely for fun. 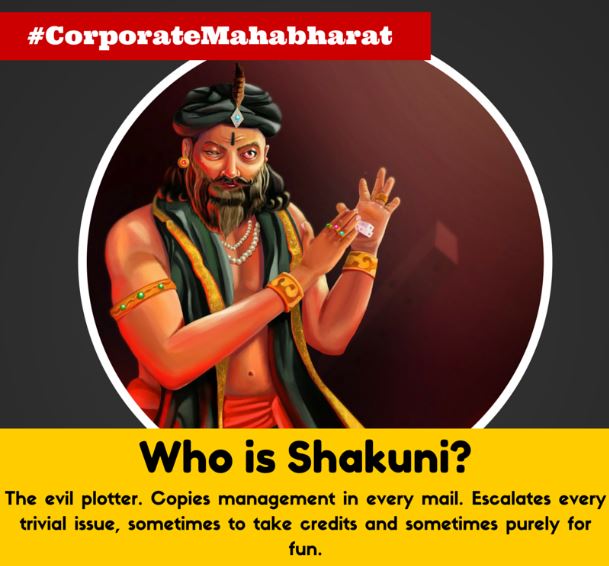 The One inning wonder. The one who performs an extraordinary feat, and then basks in the glory of it for the rest of his life.

Who Is Draupadi: The shared resource. Keeps hopping projects on boss's advice. 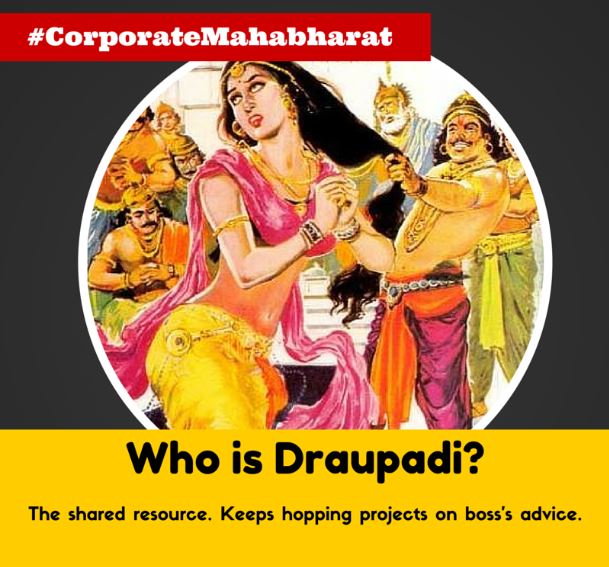 Who Is Krishna: The Ultimate Boss (MD/CEO) who knows that it is his game while he makes everyone believe that they are playing important roles too. 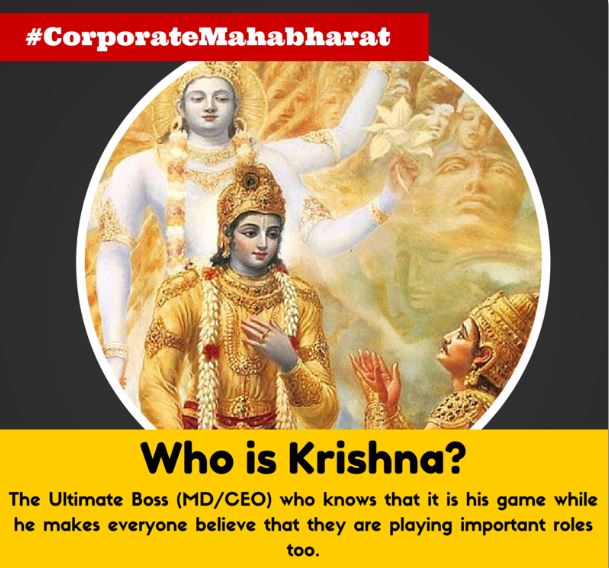 Identify What you want to do: – Bhisma – Goes against the system. He takes advantage of his boon of choosing the time of his death, refuses to die, even after his grand-nephews become old enough to be kings. Basically he does not let go and Krishna pins him to the ground, gets him out of the way, so that life can move on. Are you a "Bhisma"?

We are identified with the work we do. Hence we cannot let go of the work. When we let go of our work, we let go of our identity and that is terrifying. The thing you have to realise is: you may not let it go, but it may let you go.

Win Allies: – Five brothers won against a hundred. How do you think Pandavas did that? The relationships they established over the years paid off. You may be busy focussing on your own growth at the present, but you must start reaching out to more people and making allies. They will push you forward when the time comes.

Use the Challenging Time to your own Benefit: – Before the great war begins, the Pandavas had to spend challenging 13 years in exile in a forest. If one looks at those thirteen years, one realizes that the Pandavas' victory would not have been possible without those years in exile.We can apply the same approach to challenging times in our life and look at what can we learn from that situation. If we can do that, we will come out victorious.

Be solution oriented:- This is a very big lesson that Mahabharat teaches us. Krishna goes to the Kauravas as Pandavas messenger and asks them to give only five villages to the Pandavas and solve the dispute. But the Kauravas refuse even that as their focus is not on finding a solution to their dispute with Pandavas. Rather, they are driven by ego and power. Eventually, they lose their kingdom and their lives in the epic war. Had they been solution oriented and given the 5 villages to the Pandavas, they would have ruled their kingdom and lived longer. So remember to be solution oriented for a long and happy life!

Consequences of a Decision: – Yudhishtira and his brothers, the Pandavas, were unanimous in their choice of who should be honored first, Krishna. And so Krishna was made to sit in a special seat and his feet were washed. Unfortunately, the other guests took this as an insult. The kings raised objections, tempers flared, angry words were exchanged and finally violence broke out.Decisions do not exist in isolation. They are perceived differently by different people. Each one perceives it from his or her individual point of view. Thus, every decision contributes to the measure of one's own value. And this can be very tricky.

Distribute Work:- The more people you have, working towards different goals, the more efficient the output is going to be. One-man leadership strategy didn't work for Kauravas and there is no way it's going to work for you.

Know Every Member's Potential:- If you're going to manage a team, you better know what role they suit the best. Pandavas knew how to harnesses energies from each man in their army. You should be smart enough to use your team's ability and potential to the maximum.