Google has honored former South African President, anti-apartheid revolutionary and philanthropist Nelson Mandela with a Doodle on the occasion of the leader's 96th birthday. 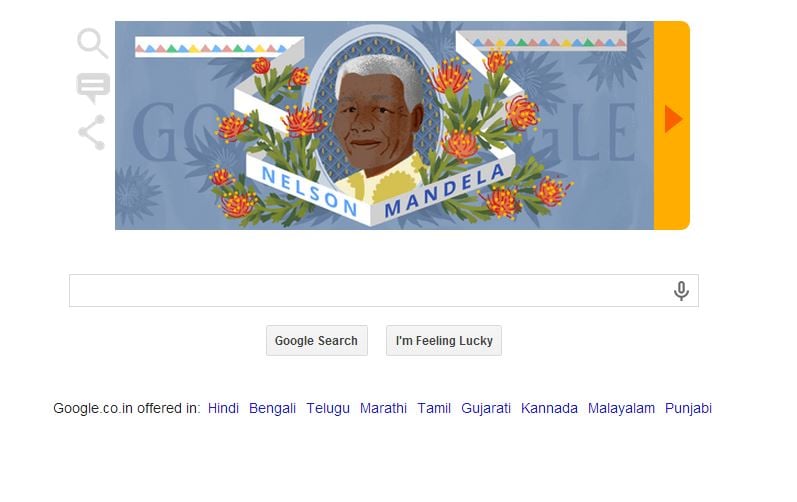 Born on July 18, 1918, Mandela became involved in anti-colonial politics and joined African National Congress (ANC) where he also served as the President from 1991-97. However, prior to being the president of ANC, he gained prominence during the 1952 Defiance Campaign of the ANC.

Arrested and convicted for conspiracy to overthrow the state in 1962, he was sentence to life imprisonment and served 27 years of his life in prison until his release in 1990.

Honouring him on his 96th birthday, Google has outlined some of the best quotes of Madiba or Tata (Father of the Nation).

The first one reads, "No one is born hating another person because of the colour of his skin or his background or his religion".

Another one reads, "People must learn to hate and if they can earn to hate they can be taught to love for love comes more naturally to the human heart than its opposite".

Lovingly known as the 'Father of the Nation', Mandela died on 5th December 2013 at the ripe age of 95 after prolong respiratory infection.

1) "Difficulties break some men but make others. No axe is sharp enough to cut the soul of a sinner who keeps on trying, one armed with the hope that he will rise even in the end."

2) "It always seems impossible until it's done."


3) "If I had my time over I would do the same again. So would any man who dares call himself a man."

4) "I like friends who have independent minds because they tend to make you see problems from all angles."

5) "Real leaders must be ready to sacrifice all for the freedom of their people."

6) "A fundamental concern for others in our individual and community lives would go a long way in making the world the better place we so passionately dreamt of."

7) "Everyone can rise above their circumstances and achieve success if they are dedicated to and passionate about what they do."

8) "Education is the most powerful weapon which you can use to change the world."


9) "I learned that courage was not the absence of fear, but the triumph over it. The brave man is not he who does not feel afraid, but he who conquers that fear."

10) "For to be free is not merely to cast off one's chains, but to live in a way that respects and enhances the freedom of others."

11) "Resentment is like drinking poison and then hoping it will kill your enemies."

12) "Lead from the back — and let others believe they are in front."

13) "Do not judge me by my successes, judge me by how many times I fell down and got back up again."

14) "I hate race discrimination most intensely and in all its manifestations. I have fought it all during my life; I fight it now, and will do so until the end of my days."

15) "A good head and a good heart are always a formidable combination."

Dog blows bubbles in the pool on command!

For any dog lover this video is a must watch. People quickly learn the pleasure of blowing bubbles in the poo or bathtub at a...
Read more

Today, From a long walk in Cubbon Park to hundreds of cafes, from trails of trees everywhere to the amazing weather, you can’t help...
Read more