15 Weirdest And Wackiest Festivals From Around the World

Ten Weird and Wacky Festivals of the world

Who doesn’t like festive seasons? The magical music, the fierce dance, the vibrancy, the color and the enthusiasm!!!

Being at festivals is like standing inside the mind of a culture as it dreams. So here are the 10 weirdest and most unique festivals celebrated around the world. From birthdays to new years every culture has its fair share of things to celebrate. While in most parts of the world you’ll find that the celebrations have at least a few things in common (eating, drinking, dancing) many times the similarities stop there. Where some people like to complement the festivities with throwing goats out of towers others prefer driving skewers through their faces. Whatever helps you get your party on right? Well prepare for some culture shock because these are the 15 most insane festivals from around the world. 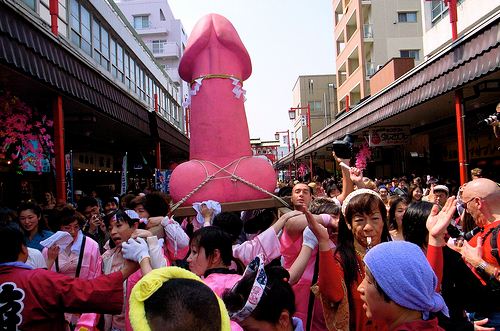 The Shinto Kanamara Matsuri is yet another strange and weird Japanese festival which takes place in Kawasaki. This festival focuses on penis shaped carvings [Read also: Magic Penis Tricks], candies and decorations to celebrate a penis-venerating shrine which was once poplar among prostitutes, who were believed to go there and pray for their protection from sexually transmitted diseases. This festival is also believed to help in easy and better deliveries, marriage and harmony between couples.

The Cooper’s Hill Cheese Rolling and Wake is an annual festival held at Spring Bank Holiday at Cooper’s Hill  in Cotswold region of England. This traditional event involves the rolling of a round Double Gloucester cheese and the people roll down the hill after this cheese. The first person to roll and race down to touch the line at the bottom of the hill wins the cheese. 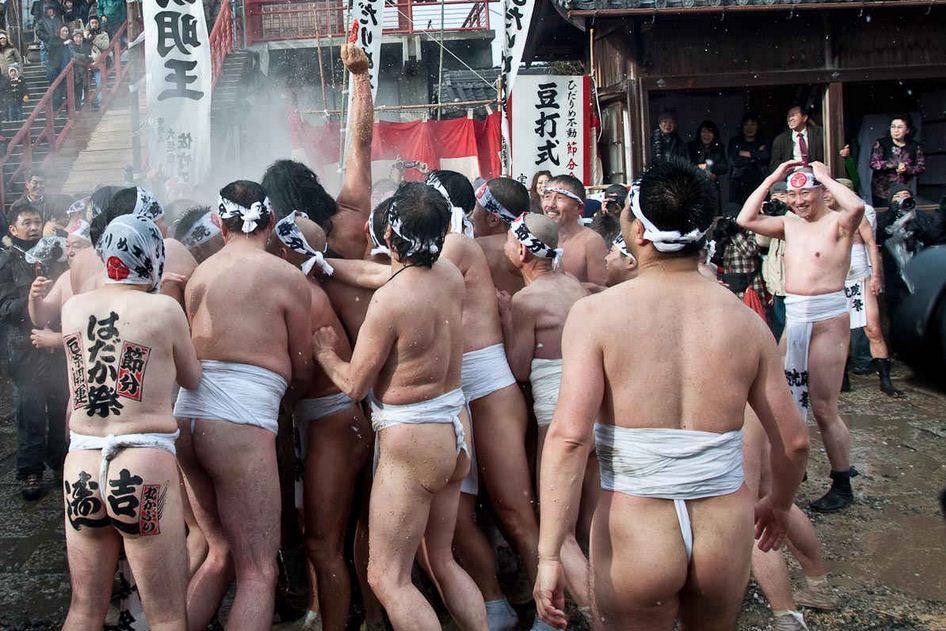 A Hadaka Matsuri is a Japanese festival, in which participants wear a minimum amount of clothing; usually just a Japanese loincloth (called fundoshi), sometimes with a short happi coat, and rarely completely naked. This festivals are held in dozens of places throughout Japan every year, usually in the summer or winter. The most famous festival is the Saidai-ji Eyo Hadaka Matsuri held in Okayama, where the festival originated. Dating back 500 years, over 9,000 men participate in the Naked Festival – Hadaka Matsuri – every year in Okayama, Japan. Every year, over 9,000 men participate in this festival. A Shinto priest throws a pair of lucky sticks into the crowd at midnight and the men must duke it out until a winner finally secures them in his grasp. Tradition dictates that if the winning man puts the sticks into a wooden box with rice, he will be happy the whole year. 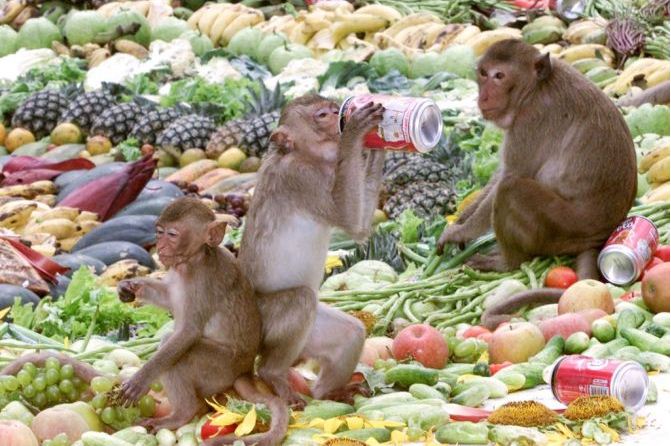 The Monkey Buffet Festival is annually held in Thailand, where almost 2000 kilograms worth of food and fruits are spread out for monkeys to feast on. A popular belief goes that the natives in Lopburi think that these monkeys are descendants of a monkey warrior, and therefore are known to bring good luck and fortune to people. So for this one day, these large numbers of monkey are left out to roam freely among people and have a lavish meal. 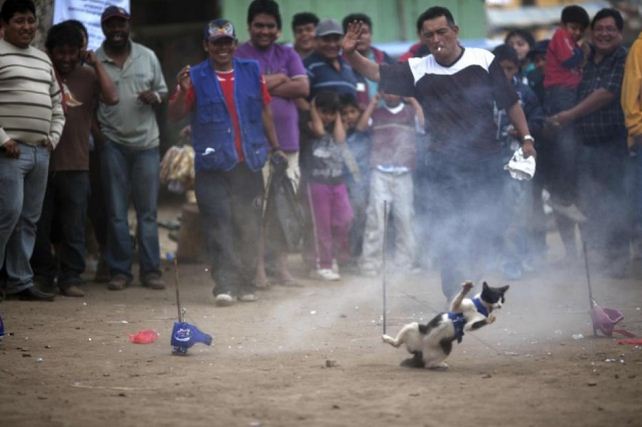 The Cat Food Festival held annually in Cañete , south of Lima, the day of Santa Ifigenia, protective black art. The festival takes place in the month of September, sacrificing himself for the occasion about fifty cats. In the same preparations are different dishes with cat meat, such as schnitzel, huacatay or greaves. Animals are bred and fattened especially for human consumption. According to popular belief, the cat meat has properties aphrodisiac and prevent ailments in the bronchi. 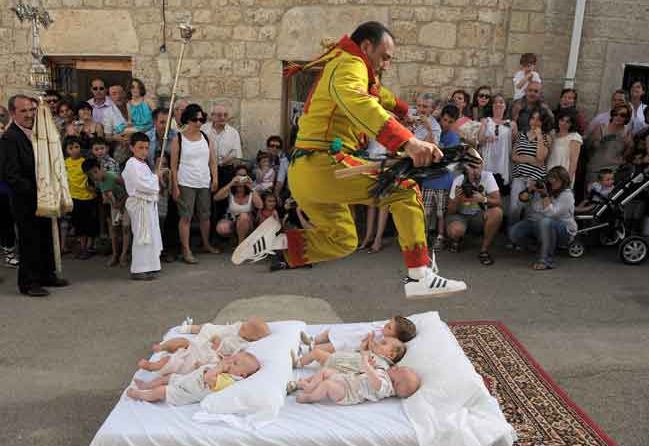 This is one of Spain’s more weird annual festivals which has taken place in the Province of Burgos since 1621. During the act, known as El Salto del Colacho (the devil’s jump) or simply El Colacho, men dressed as the Devil (known as the Colacho) jump over babies born during the previous twelve months of the year who lie on mattresses in the street. The festival has been rated as one of the most dangerous in the world. The origins of the tradition are unknown but it is said to cleanse the babies of original sin, ensure them safe passage through life and guard against illness and evil spirits.

7. Festival of the Horns, Rome 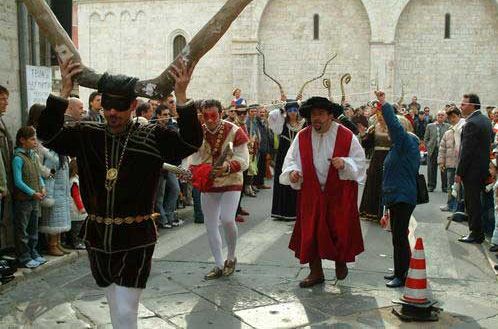 Has your wife or girlfriend ever cheated on you? If so, this festival may be of some interest. Every year, Rocca Canterano, a city outside of Rome, celebrates Festa del Cornuto — Festival of the Horns. In Italian culture, the horns represent a man who has been cheated on. The association is said to date back o the Roman Empire. Many warriors left for battle for extended periods of time. Upon their return, they were given a pair of horns as a gift. However, when they returned to their homes, they often found their wives had left them for other men. So the term “cornuto” began to refer to a man who has been cheated on. In Rocca Canterano, men who have been wronged by their better halves march through the streets, sometimes weeping or breaking objects given to them by their former lovers. The parade is meant to honour and console the men. 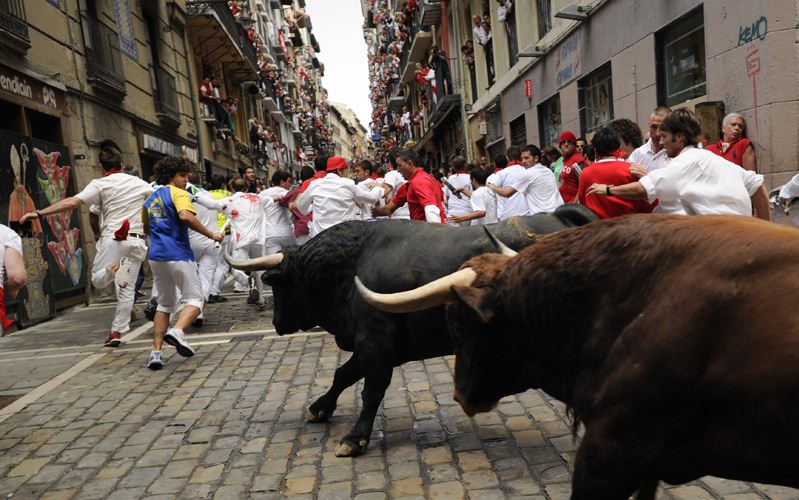 The Bull Run is part of the Fiesta San Fermin, which runs from July 6th to the 14th every year. Basically, a group of charging, angry bulls are released, chasing men down the streets for over 800 metres. The goal? To get away before a half-ton bull knocks you down. Since the Bull Run tradition began in 1910, there have been nearly 300 people injured and 15 killed. The cause of death is usually goring by a bull, with only one death a result of being hit by the bull’s horns. Despite the physical harm a bull can cause to a human, particularly during a bull run, these animals are highly respected among the Spanish people. The origin of this event comes from the need to transport the bulls from the off-site corrals where they had spent the night, to the bullring where they would be killed in the evening. Youngsters would jump among them to show off their bravado. Spanish tradition says the true origin of the run began in northeastern Spain during the early 14th century. 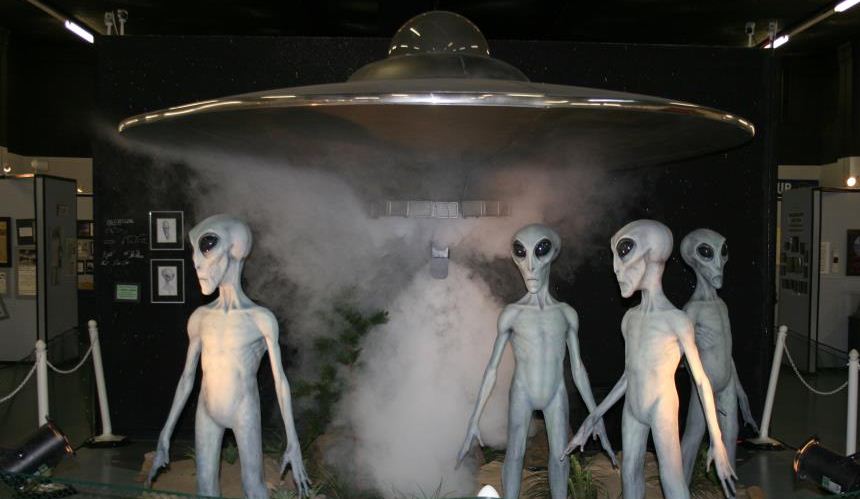 The Roswell UFO incident, also known as Roswell, was a report of an object that crashed near Roswell, New Mexico, in June or July 1947, allegedly an extra-terrestrial spacecraft and its alien occupants. The Roswell Army Air Field was quoted as saying a “flying disk” had been recovered from the scene. The following day, the statement was retracted and changed to say a weather balloon was what was found. This sparked immediate controversy among the population, who most certainly believed aliens had landed and the government was attempting a coverup. Over 60 years later, the debate continues. To celebrate their belief that aliens have landed on earth in the city of Roswell, there is an annual parade where patrons can dress up in alien-like costumes and attend brief conferences given by alien experts and authors. However, these alien activists don’t discriminate. Non-believers of the alien theory are also welcome to enjoy the festivities and dress up. 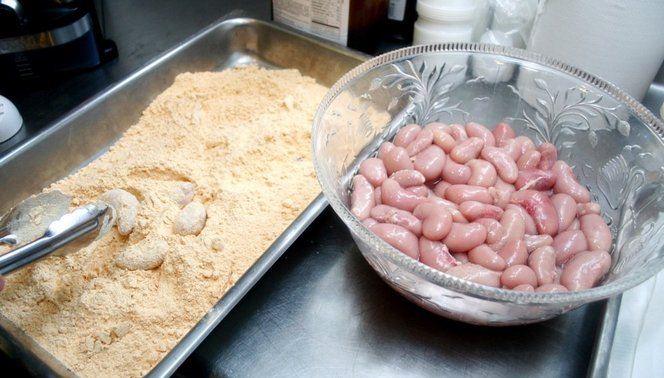 A Testicle Festival is an event held at several small towns in which the featured activity is the consumption of animal testicles, usually battered and fried. The oldest such festival takes place in Byron, Illinois, and features turkey testicles. Similar festivals are held in Olean, Missouri, Oakdale, California, Huntley, Illinois, and Missoula, Montana, some of which feature cattle testicles. Every year in September the village of Ozrem, Serbia, hosts the World Testicle Cooking Championship. The festival serves up a variety of testicles, including wildlife. It also gives awards for “ballsy” news makers. U.S. President Barack Obama and pilot Chesley Sullenberger won awards in 2010. 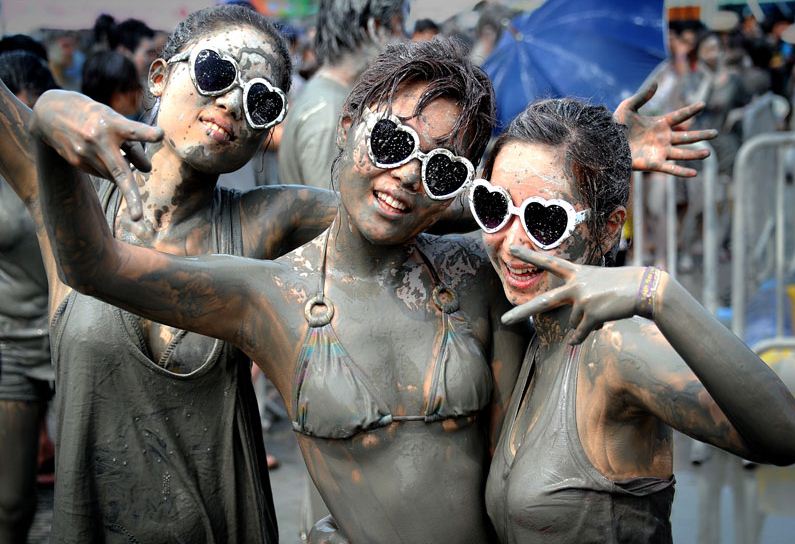 The mineral-rich muds from the Boryeong Mud Flats, a region located outside of Seoul, are used in the manufacture of high-end Korean cosmetics. To take advantage of the supposed medicinal value of the mud, tens of thousands of Korean and international tourists flock to Boryeong in July for mud wrestling, slinging and other antics at the Boryeong Mud Festival. 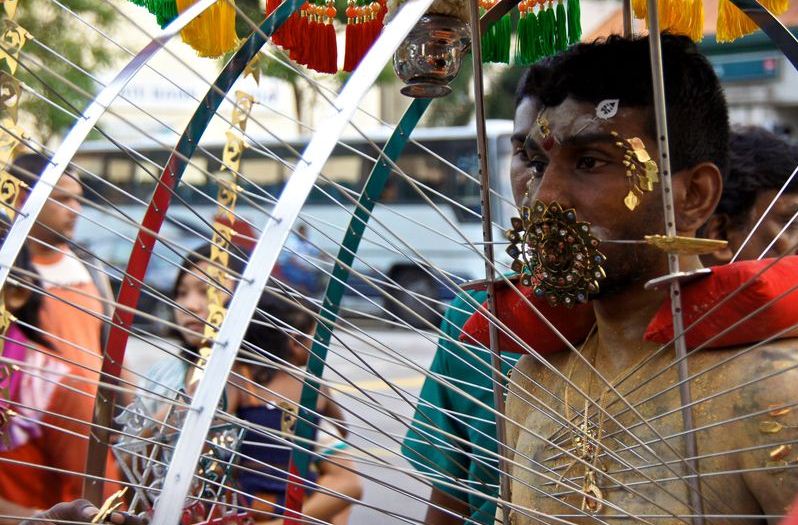 Not for the faint of heart, this Hindu festival is typically celebrated in southern India and involves some of the most intense body piercings known to man. According to practitioners, the more pain you can endure, the more you will be blessed and some even try pulling tractors or other heavy objects with the hooks in their skin.

13. Festival of the Pig, France 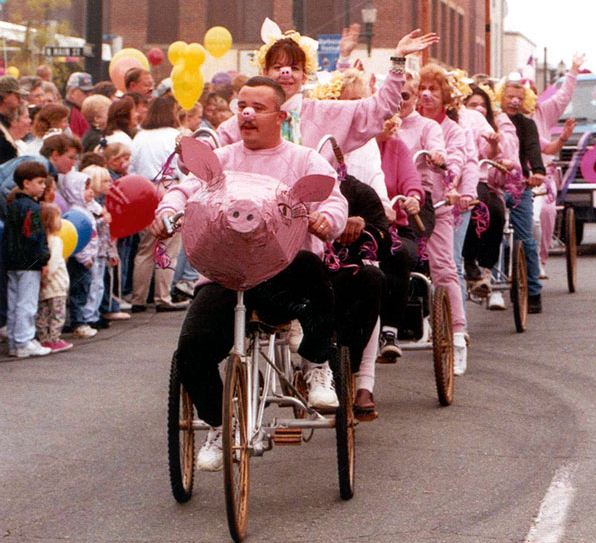 Where some people ask “why?” the French ask “why not?”. That’s about as good an explanation as your going to get concerning this annual festival held in the small town of Trie Sur Baise. Ok, that’s not completely true. The town used to be France’s biggest pig market and although business isn’t quite what it used to be, it seems the locals are still very passionate about their swine. 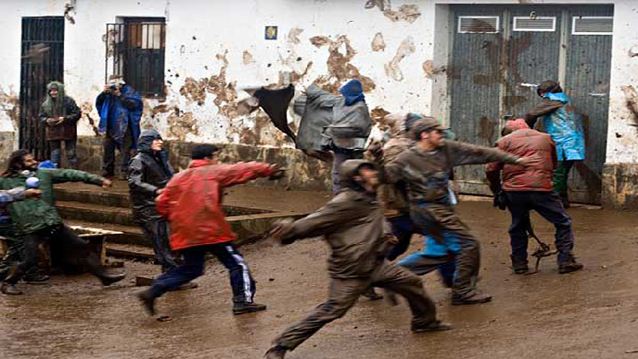 Every year the town of Laza in northern Spain holds a festival that involves people throwing muddy rags at one another. That’s not the worst part though. While everyone is in the town making a mess of themselves several young men will go up into the mountains and collect fire ants. After shoveling them into dirt filled sacks they bring them back to the town where they douse them in vinegar to rile them up a bit. After this the only thing left to do is take the angry fire ants around town and throw them into people’s faces. 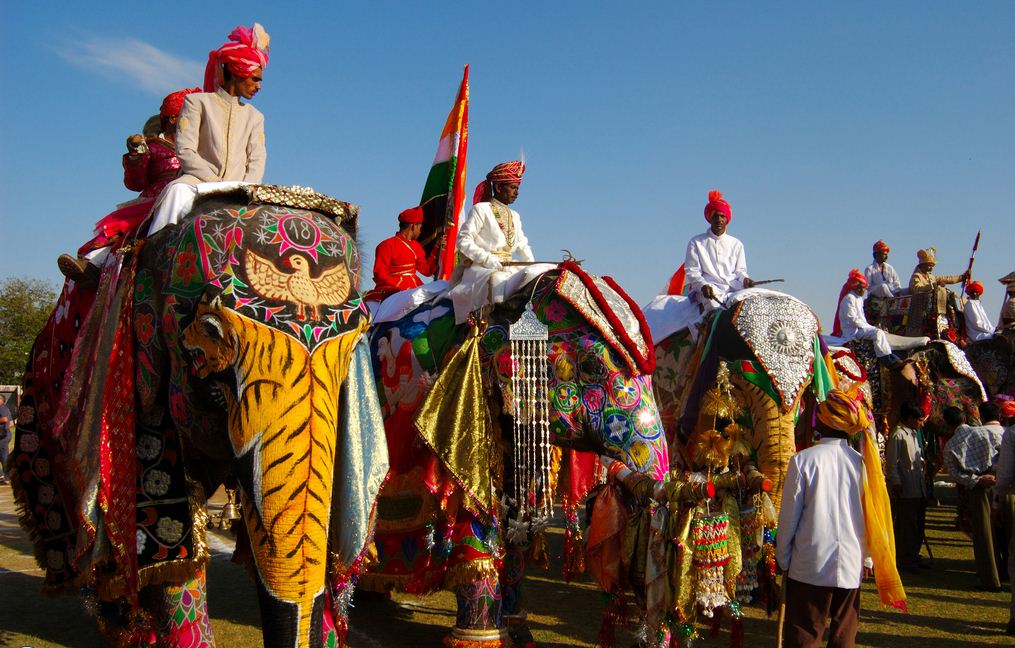 Held during India’s Holi festival, this event features races, elephant polo, and even tug-of-war between elephants and people. The most beautifully decorated elephant is awarded.