The La Brea Tar Pits are a group of tar pits in urban Los Angeles, around which Hancock Park was formed. The pits are one of the world's best and most important sources of Ice Age fossils.

Tar pits form when crude oil seeps to the surface through fissures in the Earth's crust, and when the light fraction of the oil evaporates it leaves behind the heavy tar or asphalt, in sticky pools. The La Brea tar pits have been seeping for tens of thousands of years, and has been traditionally used by local native Americans as glue and as waterproof caulking for baskets and canoes. But for the animals, these tar pits meant death. Over many centuries, hundreds of animals have fallen into the pits, become trapped and lost their lives, but the sticky gooey mass has preserved their bones. Many of these animals are now extinct, so the bones and fossils recovered from the La Brea tar pits are priceless today.

Asphalt or tar is thick and at many times the surface of the pits would be covered with layers of water, dust, or leaves. Animals mistaking it to be solid ground would wander in, become trapped, and eventually die. Predators would enter to eat the trapped animals and also succumb to it. As the bones of the dead animals sink into the asphalt, it soaks into them. The lighter fractions of petroleum evaporate away leaving a more solid substance, which encases the bones.

The bones occasionally found in the tar were first thought to be those of unlucky cattle. It was not until 1901 that the first scientific excavation of the pits were carried out. The pits have, till now, yielded entire skeleton of large mammals such as mammoths and saber-tooth cats. Over the hundred years of digging, some 5.5 million bones were recovered representing more than 600 species of animals and plants – the richest cache of Ice Age fossils. Also recovered are ancient wood and plant remnants, rodent bones, insects, mollusks, dust, seeds, leaves, and even pollen grains. The oldest known material extracted from the La Brea seeps has been dated to 38,000 years old.

Examples of some of these fossils are on display in the George C Page Museum, right next door to the tar pits themselves. 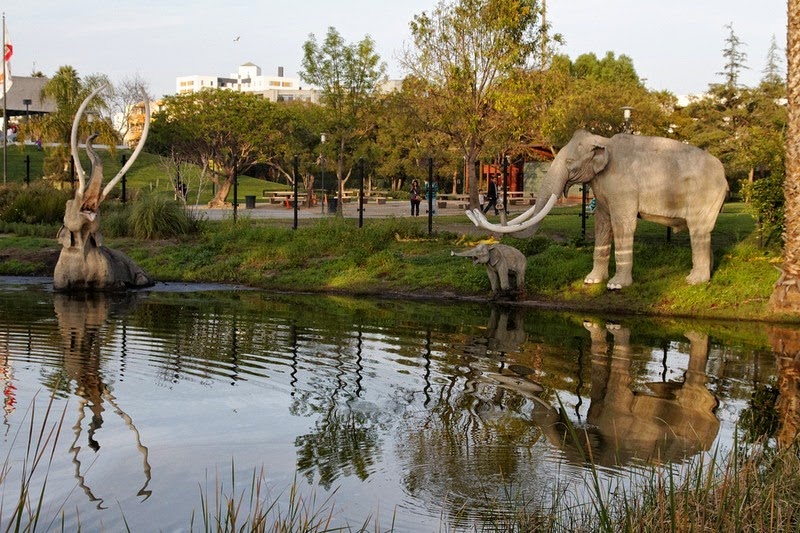 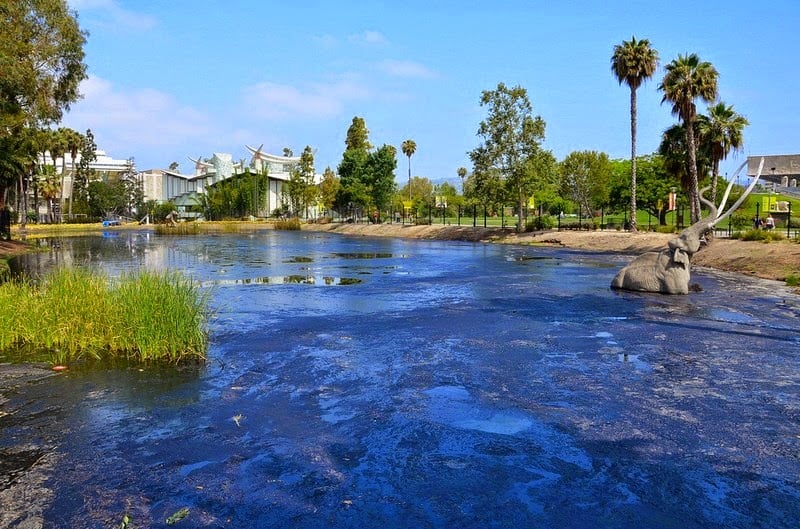 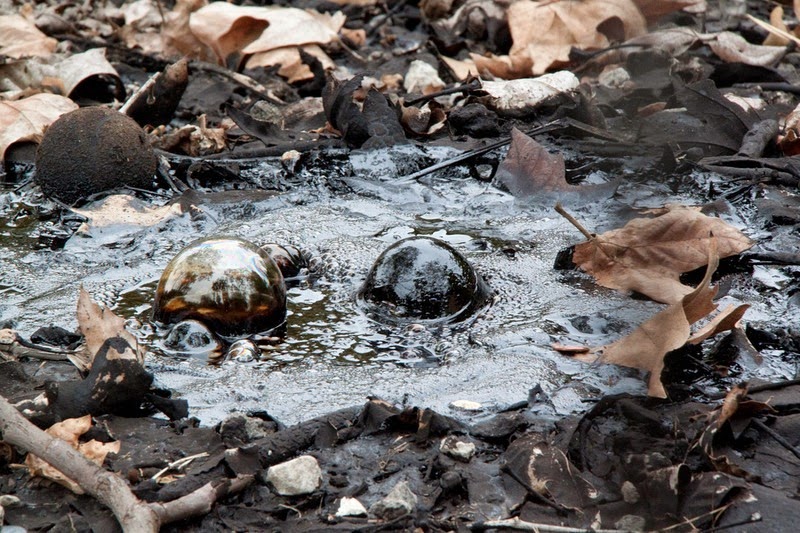 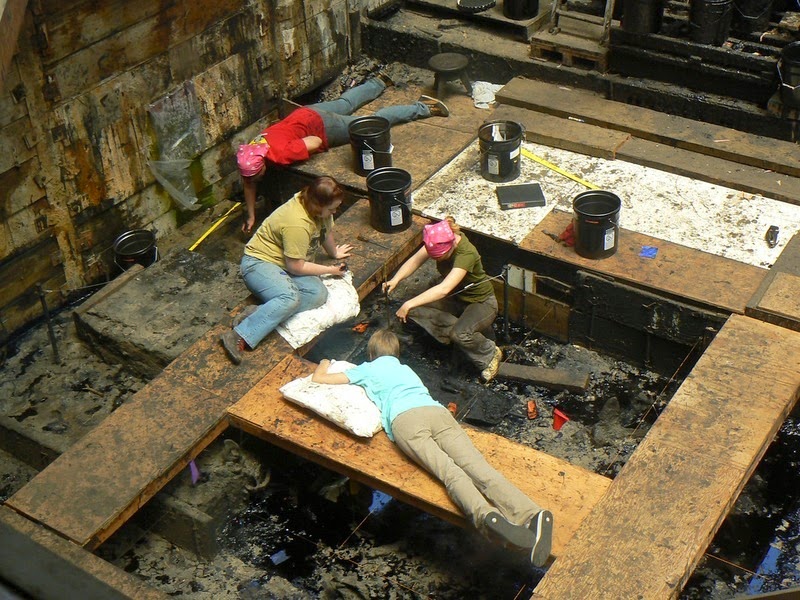 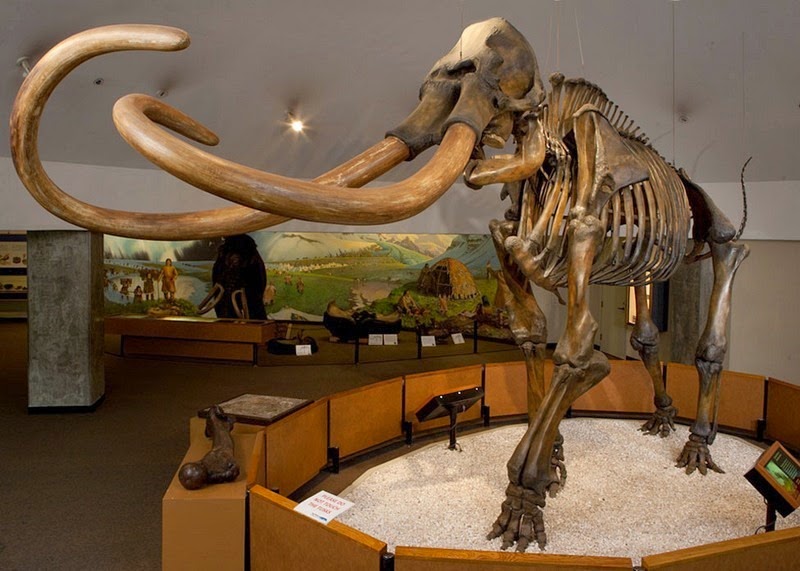 Skeleton of a mammoth at the George C Page Museum. Photo credit 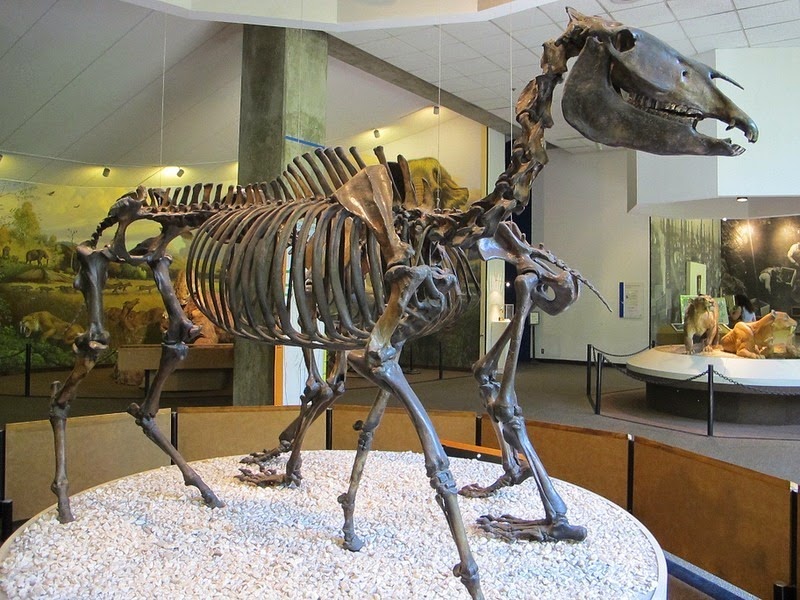 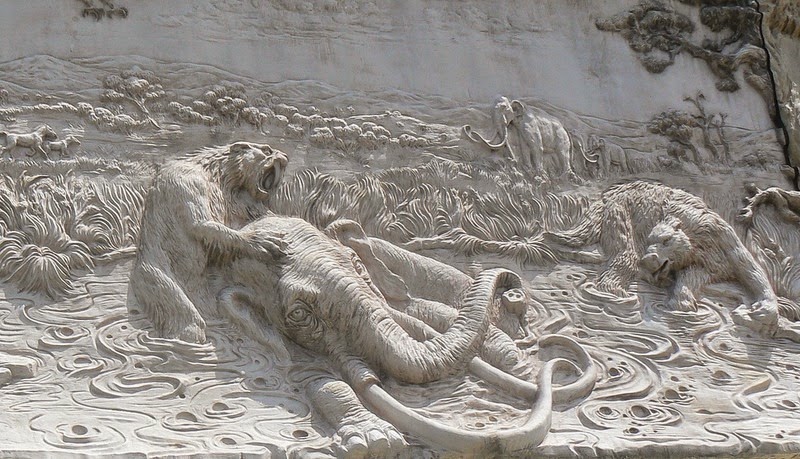 A detail from the frieze above the front entrance to the Page Museum at the La Brea Tar Pits. Photo credit

It will be closed on:

Free general admission on the first Tuesday of every month, except July and August.

The Museum's parking lot is located at the corner of Curson Ave. and 6th St., directly behind the museum (enter from the western side of Curson Ave).

If you choose street parking, please read all parking signs carefully, as restrictions apply.  Most importantly, DO NOT PARK ALONG WILSHIRE BOULEVARD between the hours of 7-9 am and 4-7 pm (Monday – Friday), or your car will be ticketed and towed.  This applies even if you are parked at a meter.
Accessibility:

Wheelchairs are available for rent on a first-come, first-served basis and can be checked out at the Main Entrance by depositing a driver's license or other form of valid identification.  All exhibits and theaters within the Museum building are accessible for wheelchairs. Wheelchairs may enter through the Main Entrance, located on the South side of the building; follow the suggested route through the pedestrian gate adjacent to the handicapped spaces in the parking lot.

Side effects of trolling Kejriwal is that the guy also got slapped Kejriwal is back!!!! Kejriwal talks to media sings and introduces his brother for...
Read more

Italian artist Peter Demetz carves realistic human figures out of wood scaled down to less than two-feet, although some of his bigger sculptures stand...
Read more

Here is the bloopers of Amazing TV series of "Game of Thrones" Season - 4 Take a Look!! https://www.youtube.com/watch?v=v-7Fs9HJvs0 Credit:GameofThrones on YouTube Thank you for watching! Please Share...
Read more

20 Qualities Without Which You Cannot Be A...

As soon as an Indian woman enters her twenties (or in some cases, mid-twenties), her parents are constantly worried about her marriage. Well, of...
Read more

“Puppy Love” on last year’s Super Bowl was such a hit that Budweiser couldn’t resist going back  for another look at the “Best Buds”—the...
Read more

Kenya is a sovereign state in East Africa that is officially known as Republic of Kenya with Nairobi as the Capital and largest city....
Read more
Load more