Mystery Of The Universe’s Missing Stars Solved By Astronomers

There are not enough stars in the universe and now astronomers think they know why.

Using the Hubble space telescope, they have discovered a distant galaxy in which star formation is itself driving the raw materials for more stars out into space at two million miles per hour – and in the process slowing future star production.

They believe the discovery could explain why the number of stars in space is lower than expected.

The astronomer Carl Sagan memorably said there were more stars in the universe than grains of sand on all the beaches in the world. That estimate has been refined more recently to 10 stars for every grain – or roughly one hundred thousand million million million, or 100 sextillion, stars. Yet not even this vast figure is enough for modern astronomers.

“We’ve known for about 10-15 years that there are not as many stars in the universe as we expect,” says Dr James Geach, of the University of Hertfordshire. 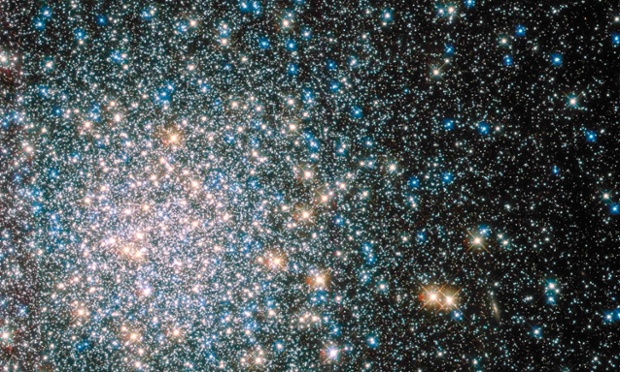 A globular star cluster called Messier 5 containing 100,000 or more stars packed into a region around 165 light-years across. Photograph: Nasa/Q

Now, Geach and his colleagues think they have discovered what astronomers have been missing.

They have found a distant galaxy known as a starburst 10bn light years away that is furiously forming stars at 260 times the rate of our own Milky Way. The torrents of radiation created by the celestial newborns are driving out the remaining gas. As this raw material is blasted away into deep space, the rate of formation will slow and eventually come to a halt.

“We are witnessing the aggressive termination of star formation,” said Geach.

The more stars that form, the more pressure their starlight creates, driving out more gas and preventing rapid star formation.

In the nearby universe, many galaxies have stopped forming stars altogether. “Something must have cleared the gas out of these galaxies,” said Philip Best, professor of extragalactic astronomy at the University of Edinburgh, who was not involved in the study.

It is not just individual stars that can fall victim to this process. In its most extreme form, astronomers think that it could even blow small galaxies apart, explaining why there are ten to a hundred times fewer dwarf galaxies than expected.

Geach says his team’s observation, published in the journal Nature, is “an important new clue in our understanding of the evolution of galaxies”.


Now Just Do Me A Favour, Share This With Your Friends !!