The Costs Of Starting An Online Business: Software, Tools, And Websites

Everyone wants to start an online business, but no one wants to pay the price and go through the sacrifice that it takes to...
Read more
Business

By stats, over 330 million active people are on Twitter. This relatively high number of people makes it a very good ground for people...
Read more 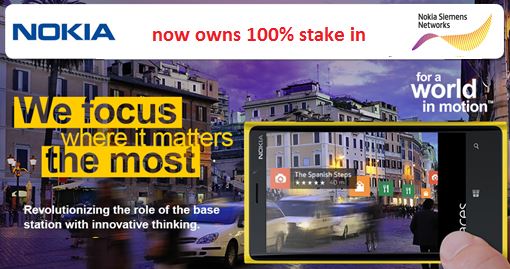 “With this transaction, Nokia buys itself a future, whatever happens in smartphones and feature phones,” Bernstein analyst Pierre Ferragu wrote in a note to clients.

Nokia and Siemens formed the 50-50 joint venture in April 2007 and the agreement lapsed in April this year (2013). Nokia had said it had wanted NSN to be sold or listed and many analysts had believed it might be sold.

The transaction had been speculated by Bloomberg — which quoted three sources close to the deal — and full control of the now-profitable business will help offset losses that Nokia has incurred from its hardware and Windows Phone business. The Finnish phone-maker recorded a loss of $196 million during Q1 2013.

Nokia Siemens Networks is the third-biggest provider of mobile network equipment, with 15 percent of the market at the end of 2012, according to market research firm Gartner. It trails Sweden’s Ericsson, with 35 percent, and China’s Huawei, with 17 percent.

NSN CEO Rajeev Suri told the conference call his firm was always looking “for ways to be more efficient, but we have no announcements to be made regarding NSN’s manufacturing or production network”.

NSN won key contracts in early-adopter countries such as Softbank in Japan and SK Telecom in Korea, and its technology has proven popular with European operators SFR in France and Telefonica for its British and German roll-outs, but it remains weak in the key United States

Under pressure from the likes of Huawei and ZTE, Nokia Siemens Networks was an unprofitable venture that both Nokia and Siemens had unsuccessfully tried to sell to private investors last year. However, a series of cost-cutting initiatives — which included the slashing of 17,000 jobs (just shy of one-quarter of the total workforce) — have seen earnings improve significantly and turn the company into a lucrative one.

Nokia Siemens Network posted profit of €899 million ($1.2 billion) during Q1 2013, which represented a 117 percent increase on the previous year. That’s despite the value of net sales actually contracting 5 percent annually. Profit in Q4 2012 was higher still, coming in at €1.197 billion ($1.56 billion).

Nokia expects the deal to be completed during the third quarter of 2013. It says that the business will become a wholly owned subsidiary of Nokia. The company confirmed that Nokia Siemens Network will be renamed, but it says it will reveal the new branding once the deal is completed.

With its clear strategic focus and strong leadership team, Nokia Siemens Networks has structurally improved its operational and financial performance. Furthermore, Nokia Siemens Networks has established a clear leadership position in LTE, which provides an attractive growth opportunity. Nokia is pleased with these developments and looks forward to continue supporting these efforts to create more shareholder value for the Nokia group.

– Stephen Elop, President and CEO of Nokia, said in a statement

The €1.7 billion deal will be paid for with €1.2 billion in cash, and the remainder via a secured loan due with Siemens one year after the deal is closed.

With Inputs from Nokia Press