OMG! 50% of Americans Have Gone to Work Hangover

Take a close look at your coworkers right now. Any of them wearing sunglasses indoors and drinking a vitamin water? There's a good chance they're hangover.

Hitting the bottle hard during Thursday happy hour can easily lead to a bleary-eyed workday. But the fear of an alcohol-induced headache on the job still doesn't stop many people from partying.

According to Blowfish, a company that makes tablets for treating hangovers, about 50% of people have admitted to going to work hungover. The data is based on a study produced in October 2013, which surveyed 5,249 Americans over the age of 21.

Gender hardly plays a part in the percentage. Fifty-two percent of women surveyed had shown up hungover, compared with 50% of men. Although, according to the Center for Disease and Prevention, men are more likely to drink excessively.

When broken down by type of job, waiters are the most likely employees to show up to work hungover. Rounding out the top five are realtors, salespeople, police officers and chefs.

The map below shows which U.S. states have the most people who have skipped work all because of hangovers. Michigan and West Virginia lead the pack with 27.5%, while the folks of Montana trail behind with 7.5%. 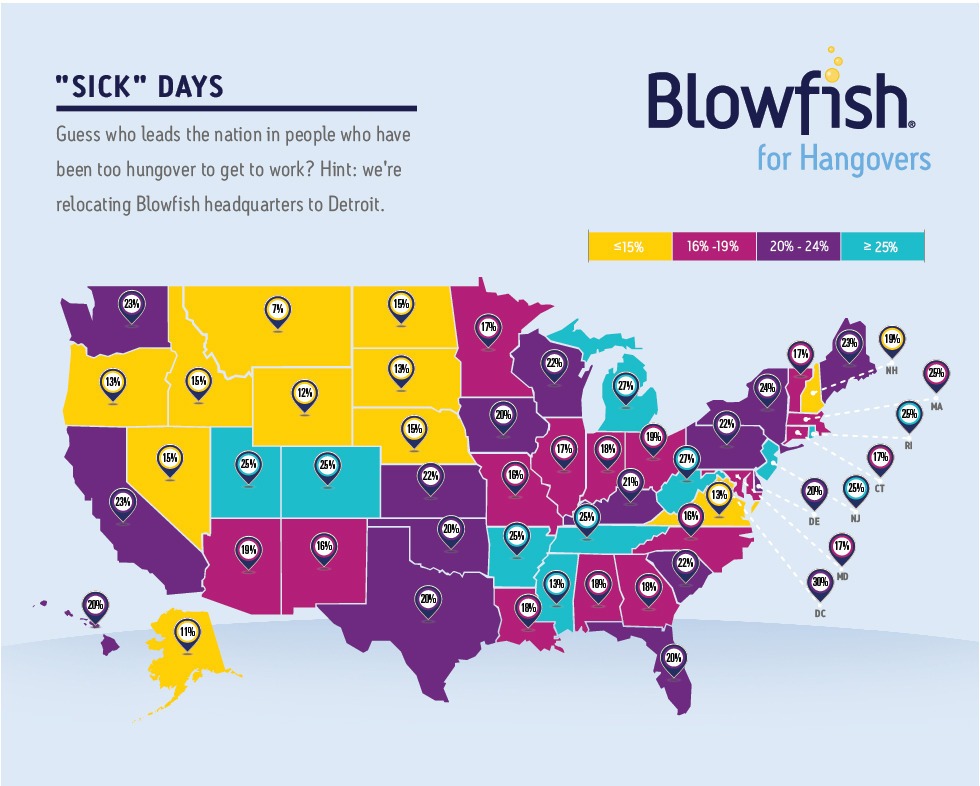 This map shows which U.S. states have the highest percentage of people who skip work due to hangovers. IMAGE: BLOWFISH


Residents of Washington, D.C., complain the most about having hangovers, while residents of Wisconsin, Utah, Rhode Island and Missouri follow behind.

Naturally, having a hangover can affect your productivity. Blowfish found that 28% of people said they've been late to work because of a hangover. About 7% have admitted to screwing up an assignment at work.

According to the Substance Abuse and Mental Health Services Administration, the rate of alcohol use was 64.8% for full-time employed adults, aged 18 or older (even though the legal drinking age in the United States is 21). The data is compiled from SAMHSA's last national survey, conducted in 2012. 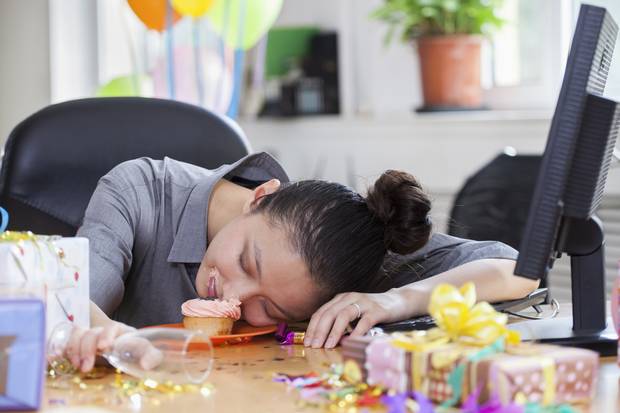 Most binge-drinking alcohol users happen to be employed, a SAMHSA rep tells Mashable.

About 57.9 million adults admitted to being binge drinkers, 75.4% of whom were employed either full- or part-time.

If you've ever had a hangover, you know its effects are all over the place. It can cause dehydration, acute inflammation, headaches, stomachaches, liver stress and general fatigue, according to Women's Health Magazine. For you, that equals one rough day at the office, when all you really want to do is sleep and eat greasy food.

Gone is the Mad Men era of grabbing a cocktail in the office. But hey, you can still have your hangover served straight up.