Relive the best moments of the 2014 FIFA World Cup in just four minutes... After 64 games and a record-tying 171 goals, the 2014 World...
Read more
Entertainment

There were definitely some amazing, crazy and weird ones Click Me For More Such Quizzes
Read more

Physicists have explained one of football's most spectacular goals. 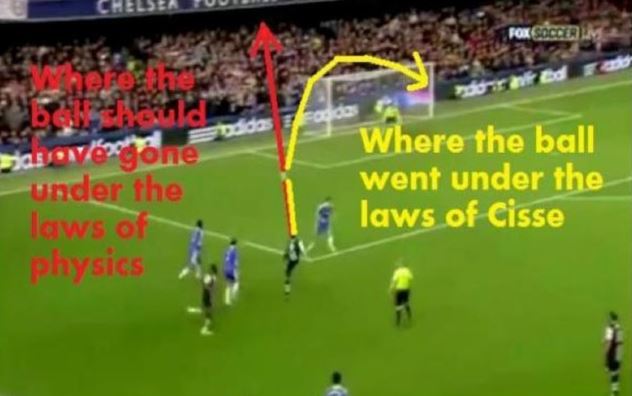 Now, a study published in the New Journal of Physics suggests that the long-held assumption that the goal was a fantastic fluke is wrong.

A French team of scientists discovered the trajectory of the goal and developed an equation to describe it.

They say it could be repeated if a ball was kicked hard enough, with the appropriate spin and, crucially, the kick was taken sufficiently far from goal.

Roberto Carlos scored his wonder goal during the inaugural match of the Tournoi de France, a friendly international football tournament that was held in France ahead of the 1998 World Cup.

Many pundits referred to it as "the goal that defied physics", but the new paper outlines the equation that describes its trajectory exactly.

"We have shown that the path of a sphere when it spins is a spiral," lead researcher Christophe Clanet from the Ecole Polytechnique in Paris told BBC News. 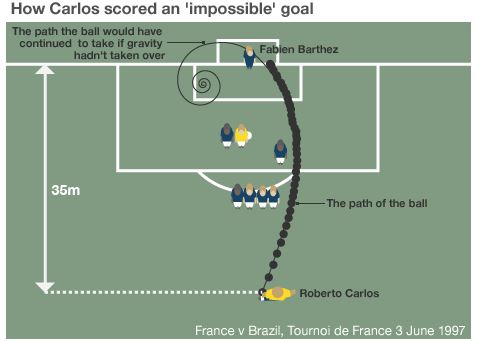 Dr Clanet described this path as a "snail-shell shaped trajectory", with the curvature increasing as the ball travels.

Because Roberto Carlos was 35m (115ft) from the goal when he kicked the ball, more of this spiral trajectory was visible. So the apparently physics-defying sharp turn of the ball was actually following a naturally tightening curve.

Dr Clanet and his colleague David Quere were studying the trajectory of bullets when they made their sporting discovery.

They used water and plastic balls with the same density as water to "simplify the problem".

This approach eliminated the effects of air turbulence and of gravity and revealed the pure physical path of a spinning sphere.

"On a real soccer pitch, we will see something close to this ideal spiral, but gravity will modify it," explained Dr Clanet.

"But if you shoot strongly enough, like Carlos did, you can minimise the effect of gravity."

The crucial aspect of the wonder strike, according to the scientists, was the distance the ball had to travel to beat Fabian Barthez.

"If this distance is small," said Dr Clanet, "you only see the first part of the curve.

"But if that distance is large – like with Carlos's kick – you see the curve increase. So you see the whole of the trajectory."

Ajit Johnson, a Ph.D. student working in cancer genetics and genomics and when he is not deconvoluting the complexity of cancer he loves telling...
Read more

This Family Has Been Creating ‘Real Life’ Christmas...

Each year they try to capture the essence of raising two boys in their personalized unique Christmas cards…here they are.
Read more

Which Mythical Being are You?

Which Mythical Being are You? Demigod, Shadowhunter, Witch/Wizard, Werewolf, Vampire, Fairy, Mermaid, or Genie? Click Me For More Such Quizzes
Read more

Here is a selection of the beautiful photographs from the Urban Photographer of the Year 2015, a competition organized by CBRE, which brought together...
Read more

Dabbawalla: One Of The Most Efficient System In...

A dabbawala; also spelled as dabbawalla or dabbawallah; is a person in India, most commonly in Mumbai, who is part of a delivery system...
Read more

Kareena Kapoor Khan can carry any outfit or attire with equal grace. Be it a traditional outfit or a modern westernized dress. But a...
Read more
Load more