Giraffes an African even-toed ungulate mammal, the tallest living terrestrial animal and the largest ruminant. Its species name refers to its camel-like appearance and the patches of color on its fur. Their long necks, regal stance, and beautiful features make them seem almost surreal, despite the fact that they roam the African plains with very real danger all around them.

Their unique biology means that they have some problems to deal with that never affect other animals, and some behaviors that at first look downright bizarre. 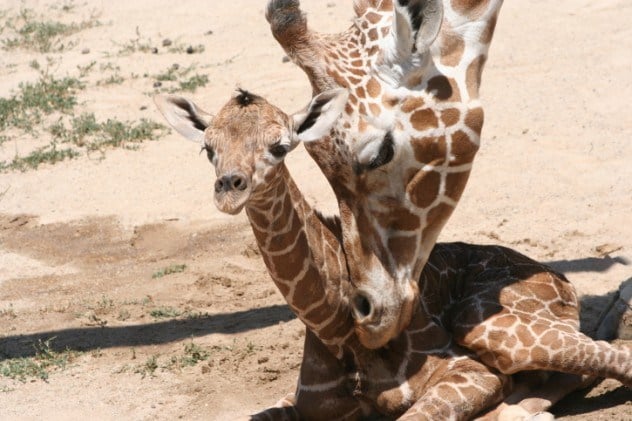 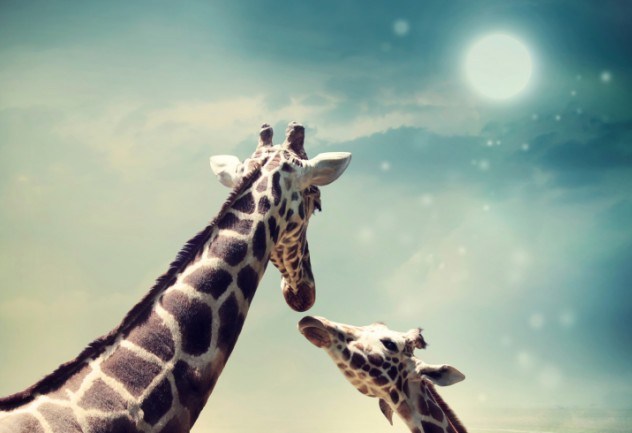 Giraffes and space travel don’t seem like an obvious mix, but they have actually contributed quite a lot to our travels in space. Weightlessness has always posed a number of problems to the human body. One of the most significant issues is the weakening of leg veins. Since the blood flows differently in space, the circulatory system of the legs doesn’t have to put in so much work in order to pump the blood back up. The veins get lazy, thin, and weak, which can pose serious problems when returning to Earth. Giraffes have provided a solution to this problem. Baby giraffes learn how to stand almost immediately upon birth, thanks to their rapidly inflating leg veins. When NASA observed this, they were able to create the Lower Body Negative Pressure process. It’s a device that consists of an airtight tube that seals around the astronaut below the waist and applies vacuum pressure, thus rapidly expanding the leg veins and making blood rush into the legs and pelvic area. When this pressure is applied at regular intervals, the astronaut’s leg veins stay in shape. 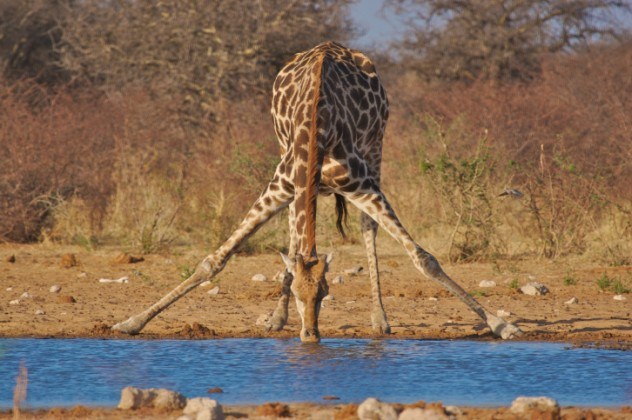 Because giraffes are built the way they are, drinking can pose serious problems for them. To get to water, they need to spread their front legs and crane their neck down at an awkward angle, a position that leaves them clumsy and vulnerable to predators such as crocodiles.Giraffes deal with this very real drinking problem in a number of ways. Their digestive system can obtain almost all the water they need from the plants they eat, so the adults only need water once a day. Young giraffes, being the most vulnerable, are the most efficient at this, to the point where they often don’t need to drink water at all. The reason they’re able to do this is that giraffes are extremely economical creatures when it comes to liquids, they never sweat or pant to cool down, like most mammals. Instead, they allow their body temperature to fluctuate according to the temperature around them, enabling them both to conserve water and to keep cool in any situation. 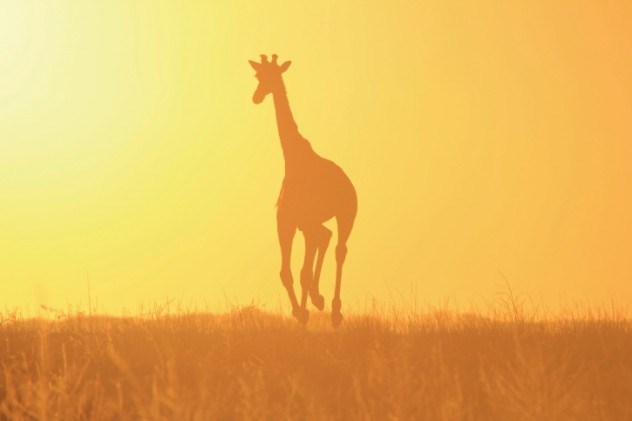 Giraffes seem like relatively clumsy creatures, thanks to their cumbersome looking limbs and top-heaviness. Their bobbing walk, where both legs on one side are lifted in unison, looks positively relaxed. But looks can be deceptive. Giraffes have two modes of locomotion, fast and horrifyingly fast or, as biologists put it, walking and galloping. A walking giraffe might seem slow, until you realize it can cover 4.5 meters (15 ft) with every step. That means even a leisurely walk gives it a speed of 16 kilometers (10 mi) per hour.And that’s just its normal, lazy cruise mode. If a giraffe decides to run, you’d better hope it’s not because it is chasing you. The fast and surprisingly graceful gallop of a giraffe can easily outpace a human, and even many horses. Its top recorded speed is a whopping 56 kilometers (35 mi) per hour. Still, giraffes are unlikely to replace horses anytime soon. Thanks to their long windpipe, they run out of breath quite quickly when running. 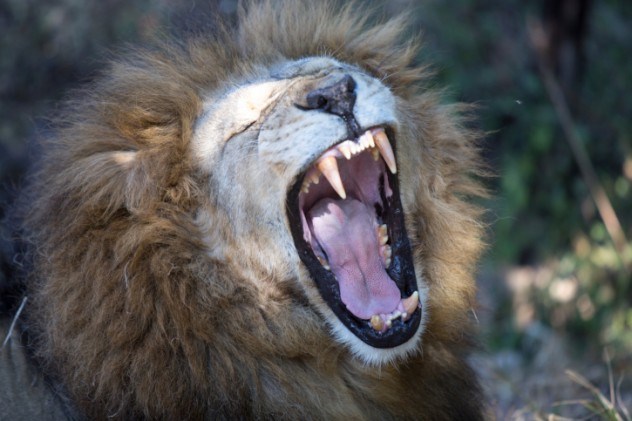 With its ridiculously unbalanced build and fast gallop, it’s easy to assume the giraffe is ill-equipped for defending itself and runs away when predators are near. Nothing could be further from the truth. Giraffes are well-versed in the art of self-defense, to the point where even lions only dare to attack them in large groups (and then only when they’re desperate). Giraffe legs are powerful and heavy, and each of them ends in a hard, sharp, 30-centimeter (12 in) hoof. A giraffe can kick in any direction and in a manner of ways, and its kick can not only kill a lion, but actually decapitate it.Unsurprisingly, very few predators bother an adult giraffe. 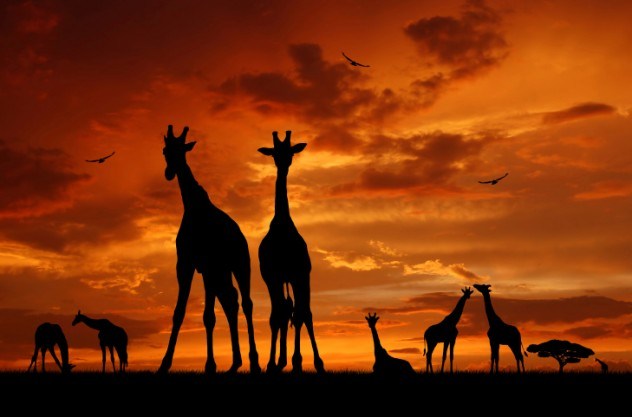 Thanks to their awe-inspiring appearance and hidden strength, giraffes are greatly revered in many traditional African belief systems. Although large world religions (particularly Christianity) have taken their toll on traditional African religions, the giraffe has endured as a mystical symbol here and there. One of the stranger ways this has manifested is the Giraffe Dance. It is a mystical “curing” dance that came to a woman in a dream in the 1950s. She saw a vision of a herd of giraffes running in the rain, their hooves and the raindrops beating a peculiar melody. The vision became the Giraffe Song, which spawned a Giraffe Dance, which in turn started spreading like wildfire. For decades, the Bushmen of the Kalahari area used it as their main hunting dance. The actual dance consisted of the men doing the Giraffe Dance in a large circle, inside which the women sat in a group, singing and playing the Giraffe Song. 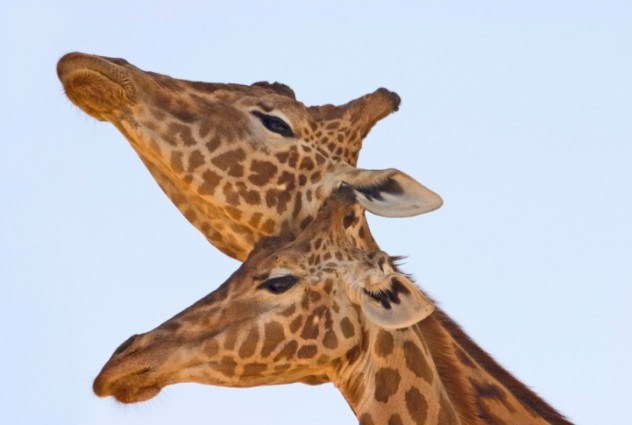 Many of you have probably  seen pictures of two giraffes gently rubbing their necks together. It’s an adorable image that gives the impression of intimacy and companionship, and as such it has been used on many a Valentine’s Day card. This practice is actually far from friendly, it’s closer to locker room wrestling or even actual fighting. It’s called necking, and it’s usually done by male giraffes as a test of strength, the giraffes bang, twist, and rub their necks together to see which of them is stronger. Although they seem cute, these fights are quite taxing and can last up to 20 minutes.Still, the Valentine’s cards are right in one respect—even brutal necking can sometimes turn erotic, though female giraffes are not involved. Sometimes, the test of strength arouses the male giraffes so much that they just drop the fighting and move on to . . . other things. 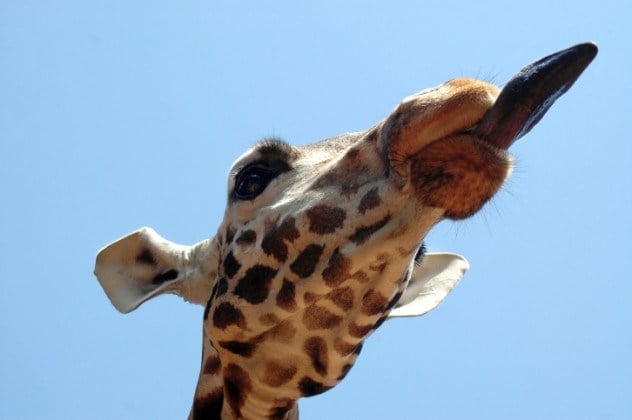 Giraffes have a prehensile tongue approximately 50 centimeters (20 in) long. The tongue is colored bluish-black to protect it from sunburn, and the giraffe uses it much like an elephant uses its trunk—it grasps things with it and uses it for personal grooming, such as picking its nose and cleaning its ears. The snake-like tongue is especially useful for obtaining food, the giraffe can just wrap it around the foliage and yank it into its mouth.The mouth itself is no less strange. The giraffe’s large upper lip is also prehensile, which gives the mouth an almost hand-like dexterity when combined with the tongue. The insides of the mouth, along with the lips and the tongue, are completely covered with hard, finger-like papillae to protect it from thorns and nasty gashes. 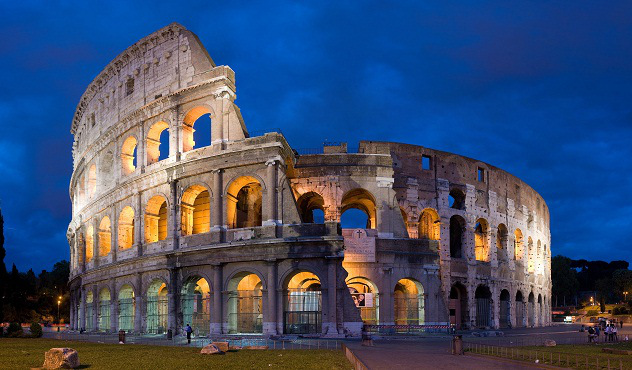 With their forceful kicks and enormous height, one might assume a giraffe would make a poor pet. Ancient Egyptians thought otherwise. As early as 2,500 B.C., Egyptian rulers captured giraffes and paraded them in front of their subjects. Hunters found giraffes fairly easy to transport on a raft down the Nile, so they could provide a steady supply of these exotic animals. Giraffes were so impressive and regal that the Egyptians started giving them as presents—and passive-aggressive examples of their power—to the rulers of other countries. The most famous recipient of a giraffe gift was none other than Julius Caesar, who was most impressed by the present. He named his new prize animal “cameleopard,” because he thought it resembled a cross between the two species. He paraded it home for the whole of Rome to admire. And then he stuck the poor animal in a circus arena and fed it to lions to show his power. Moral of the story—you don’t become the emperor of the most powerful nation in the world by being a particularly nice person. 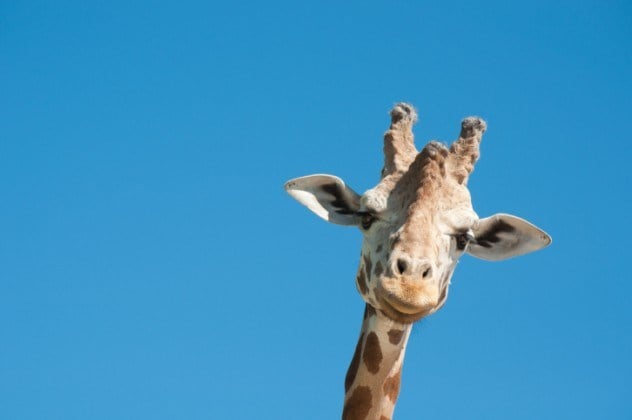 Perhaps the best-known giraffe celebrity in history is Zarafa, the first giraffe in France and a royal gift to King Charles X from Muhammad Ali, the Ottoman viceroy of Egypt. Zarafa—meaning “The Lovely One” in Arabic—arrived in France in October 1826. She was paraded from Marseilles to Paris at a leisurely pace, and her regal and friendly demeanor made her the toast of the town wherever she went—100,000 members of the adoring public came out to follow her progress. Eventually, Zarafa set up shop in the Jardin des Plantes in Paris and became the biggest celebrity in the entire country. Famous writers wrote stories about her. Acclaimed artists painted pictures inspired by her. Women started wearing high “giraffe” hairstyles and clothing with giraffe spots patterned after her. Giraffe-themed furniture and decorations were all the rage, and eventually the entire continent of Europe caught “Giraffemania.” Of course, like every craze, it was bound to end. Zarafa fell out of fashion, and the public stopped coming. Although some say it is sad that the giraffe had to spend her final years as a relative recluse, she probably enjoyed the peace and quiet after a lifetime of being constantly followed by millions of people.

Isn’t it interesting and funny to know that this beautiful, tall creature has lot to do in its life. Here are some other interesting knowledge consolidated for you.

1. Tallest mammal: Giraffes are the tallest mammals on Earth. Their legs alone are taller than many humans—about 6 feet.

2. Fast Runner: They can run as fast as 35 miles an hour over short distances, or cruise at 10 mph over longer distances.

4. Drink Less: Giraffes only need to drink once every few days. Most of their water comes from all the plants they eat.

5. Sleeping on legs: Giraffes spend most of their lives standing up; they even sleep and give birth standing up.

6. Giraffe Calf can stand after birth: The giraffe calf can stand up after about an hour and walk within a week, it starts to sample vegetation.

7. Calves get killed: Despite the females’ attempts to stand over their calves during attacks by lions, spotted hyenas, leopards and African wild dogs, many calves are killed in their first few months.

8. Giraffe spots: A giraffe’s spots are much like human fingerprints. No two individual giraffes have exactly the same pattern.

9. Covered horns: Both male and female giraffes have two distinct, hair-covered horns called ossicones. Male giraffes use their horns to sometimes fight with other males.

10. Less sleep: Giraffes only need 5 to 30 minutes of sleep in a 24-hour period! They often achieve that in quick naps that may last only a minute or two at a time.

11. Soundless: Whilst it was thought that giraffes did not make any sounds, this is now known to be untrue, as giraffes bellow, snort, hiss and make flute-like sounds, as well as low pitch noises beyond the range of human hearing.