After two years of failed attempts in Congress and months of internal deliberations, President Obama is likely to go it alone in the coming weeks and roll out a series of unilateral changes to the nation's immigration system.

The options could be far-reaching, from shielding millions of undocumented immigrants from deportation to tweaking the immigration system to allow more foreign workers into the country.

The announcement will undoubtedly kick off a heated debate between immigration advocates and hard-liners. It could prove the signature of Obama's immigration legacy and prompt lawsuits against his administration. It could even influence elections critical for Republicans trying to regain control of the Democrat-controlled Senate.

Both sides have lined up for weeks, offering suggestions, recommendations and admonitions. Immigration advocates have huddled with White House officials to stress how broad Obama's legal authority is. On Twitter, they use the hashtag #GoBigObama.

"President Obama can and should undertake administrative reforms that are broad, inclusive and that benefit a significant portion of the 11 million Americans in waiting," said Marielena Hincapié, executive director of the National Immigration Law Center, referring to the more than 11 million undocumented immigrants in the USA. "If the administration decides to make less significant administrative reforms, it will be because of today's politics, not the law or historic precedent that will have held him back." 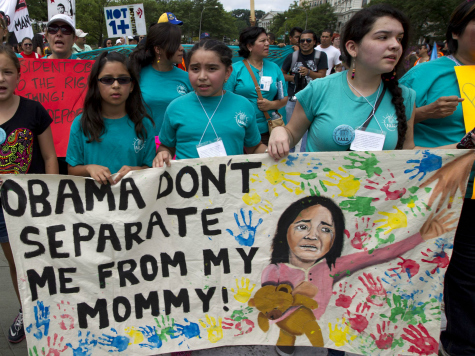 Critics say Obama has crossed a constitutional line and will break the law if he protects more undocumented immigrants from deportation. On Twitter, they compare him to Roman emperors.

"This is opening up a constitutional can of worms that threatens to fundamentally challenge our system of governance to one of elected monarchs every four years who write their own laws," said Mark Krikorian, executive director of the Center for Immigration Studies. If Obama protects millions of undocumented immigrants from deportation, "it would represent the greatest power grab by a president in peacetime."

Here is a look at five changes proponents and critics of the White House say could be on the way:

In 2012, Obama created a program called Deferred Action for Childhood Arrivals, or DACA, which allowed undocumented immigrants brought to the country as children to apply to the federal government to be removed from consideration for deportation for two years. More than 550,000 people have been approved, and many of those are in the process of applying for two-year extensions.

The president may expand that pool considerably. Possible beneficiaries include parents, siblings and spouses of DACA recipients, parents of U.S.-born children and undocumented immigrants who have lived in the USA for long periods of time. Immigration advocates have estimated up to 5 million undocumented immigrants could benefit.

A group of Immigration and Customs Enforcement agents sued the president over DACA, arguing it violated his congressional mandate to carry out immigration enforcement laws.

Immigration advocates say the president is well within his constitutional authority to decide which of the nation's undocumented immigrants should be targeted for deportation given the government's limited funding.

The president could grant "temporary protected status" to people from countries ravaged by war, violence or disasters. Or he could use various forms of "parole" granted to undocumented immigrants such as those with immediate relatives in the U.S. military.

When undocumented immigrants are approved for DACA, they are eligible for a work permit that allows them to legally work in the country. Any expansion of that program would probably include a similar ability to work.

Business groups are pressing the White House to change some regulations that govern foreigners trying to enter and work in the USA. For example, a technical change in federal regulations could free up hundreds of thousands of green cards for foreign workers. Obama could also change a rule that restricts the spouses of foreigners working in high-tech fields from working while in the country.

Agricultural groups are pressing Obama to change visas for lower-skilled workers. The system makes it difficult for farmers and ranchers to quickly bring in workers they need, something they want Obama to address on his own without congressional authority.

Opponents such as Sen. Jeff Sessions, R-Ala., have argued that such efforts would take jobs away from Americans.

"Tens of millions of Americans are on welfare, unemployment and public assistance," Sessions said recently. "Yet the White House and their Senate majority seem more concerned about the economic demands of large corporations or the citizens of other countries than about getting our own citizens back to work into stable jobs that can support a family and uplift a community."

Over the course of Obama's presidency, the Department of Homeland Security has expanded a program to every U.S. county called Secure Communities that gives police the ability to check the immigration status of people they've arrested for other crimes.

Proponents say its critical to help federal officials know immediately when immigration law violators are in custody. Once a person is flagged, ICE can request that police hold onto that suspect, even after their local charges have been cleared, so federal officials can pick them up and process them for immigration violations.

The program has been lambasted by immigration advocates and some law enforcement officials who say it breeds distrust between undocumented immigrants and the police officers who patrol their neighborhoods. A growing number of cities and states from California to Maryland to Oregon have refused to comply with the federal requests to hold the violators.

Another program, known as 287(g), deputizes police to help enforce immigration laws. The Obama administration has not pushed for a nationwide rollout of the program like it did with Secure Communities, but 34 local agencies use it.

Immigration advocates hope the president scales back those programs or eliminates them.

Law prohibits undocumented immigrants from serving in the armed forces.

A change in that policy has been proposed by Democrats and Republicans alike. Rep. Jeff Denham, R-Calif., proposed the ENLIST Act this year, which would allow some undocumented immigrants to join the military and get a green card after their service, but House Speaker John Boehner, R-Ohio, did not bring it to the House floor.

The secretary of Defense has the power to allow some immigrants to enlist if their skills are considered vital to "national interests." Obama could use that power to expand the number of undocumented immigrants who can join the military.

Some legislators are concerned that U.S. citizens with undocumented immigrant dependents have been barred from joining the military. Obama could eliminate that hurdle or provide a more uniform set of rules for those cases.

Before Congress adjourned for its August recess, Obama requested $3.7 billion to help the federal government deal with the 50,000 Central American children caught crossing the border. Congress left town without approving any funding, and that could open the door for the president to make some changes on his own.

The administration has redirected funding and manpower toward the border. ICE agents, immigration judges and U.S. attorneys are being reassigned from the interior of the country to the border to process the waves of unaccompanied children being caught. Immigration courts face years-long backlogs, so the president could make broad changes to speed up the deportation hearings of those caught.

In 2011, the administration published a new set of guidelines dictating where federal authorities would focus their deportation efforts. For example, undocumented immigrants with extensive criminal records, those who pose a threat to national security and repeat border-crossers would be targeted before others. The president could change those priorities to focus more on Central Americans caught crossing the border.

She is cute, She is talented & She is strong too. This Strong Young Girl Are Changing the Face of Girl Power As We...
Read more

20 Luxury Watch and Jewelry Brands & Their...

You’ve never been quite sure if you’re pronouncing all your favorite watch company whose remarkable piece of timekeeping engineering you wish to wear on...
Read more

You shouldn’t in any case mess with the first and inner layer of clothing – your lingerie.  The ‘right fit feeling’ should not be...
Read more

WiseGEEK has conducted a very visual and informative study and presented a photo series, which compares what 200 calories actually look like in different...
Read more

International No Car Day | Its Amazing To...

To celebrate International No Car Day (Sept. 22), some clever Latvian bicyclists from the Let’s Bike It organization dressed their bikes up as automobiles...
Read more
Load more