The Guy Who Invented the Kalashnikov Assault Rifle Has Died

This Russian RIFLE can control any DRONE without firing ANY BULLET

Russian company Kalashnik (it’s Kalashnikov of course) father of the famous rifle coming up with a next-gen. They have made a new...
Read more
Animals

Monkey firing AK-47 between soldiers in Africa- An Analysis

Video shows African soldiers giving Monkey a loaded gun ... AK-47, the Chimp monkey shoots at soldiers and they run away. This is a popular...
Read more

The man who gave the world the AK-47 assault rifle has died.

[quote align=”right”]Mikhail Kalashnikov's automatic rifle became one of the most familiar weapons on the planet. It was employed by the armies of dozens of countries, and incorporated in several national flags.[/quote]

Russia Today reports that Mikhail Kalashnikov has died at the age of 94. There is, at this time, no official cause of death until an autopsy can be performed. Kalashnikov was hospitalized in November, and spent time at a cardiac clinic in May.

Kalashnikov leaves behind a mixed legacy. It’s telling that the obituaries coming out – including this one – focus on his assault rifle invention.

Mikhail Kalashnikov developed the AK47 to match the firepower of German weapons. The AK-47 was a revolutionary weapon. Its ease of use and cheap cost of production made it a favorite of armies around the globe. It became the most popular assault rifle in the world. 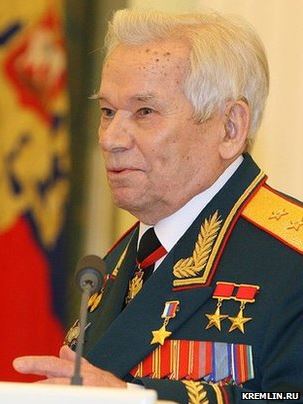 But it has also been used to kill an estimated 250,000 people every year. It has iconically been used by everyone from the Vietcong to Osama bin Laden. The AK-47 has become a symbol.

During his life, Kalashnikov went back and forth on what his invention eventually became. “It’s not my fault that it was sometimes used where it shouldn’t have been,” he said once at the Kremlin. But he also expressed regrets. In 2006, he said, “I’m sad that it is used by terrorists … I would prefer to have invented a machine that people could use and that would help farmers with their work – for example a lawnmower.”

For all its prominence, Kalashnikov supposedly never saw profits from the AK-47 – he never patented it.

Perhaps the world would have indeed been better off if Kalashnikov invented a lawnmower instead of the AK-47. But a simple, cheap assault rifle seems like an inevitable invention. Kalashnikov simply gave the world what it craved.

In 1987 he was made an honourable citizen of Izhevsk, where he had lived and worked from 1949. On his 75th birthday, he was promoted to Major-General by President Boris Yeltsin.

However the simplicity of his weapon meant that he failed to gain much financial benefit from his invention.

Dozens of arms manufacturers in other countries found the AK47 very easy to copy and few paid any royalties because of a dispute over patents.

But late in life – when he was 83 – Kalashnikov was reported to have acquired a 30% share of a German company in exchange for the use of his name for products including Kalashnikov umbrellas and mineral water.

But it is the AK47 which guarantees that his name will be remembered.

Mikhail Kalashnikov refused to accept any responsibility for the many people killed with the weapon.

"My aim was to create armaments to protect the borders of my motherland," he said.

"It is not my fault that the Kalashnikov was used in many troubled places. I think the policies of these countries are to blame, not the designers."

The tortoise and the hare story. V 2.0

Good old lessons in teamwork from an age-old fable Once upon a time a tortoise and a hare had an argument about who was faster. They...
Read more

We have posted several videos for Qityapa regarding MTV roadies, CID, SIDHU. Now its turn of the office romance Qtiyapa Have you ever imagined a...
Read more

"You're from Noida! YUCKS!" "That's so LS!" "Let's go Thailand." "My boyfriend drives BM yaa!" We have been hearing, watching and thinking, the most gravely misconstructed social and...
Read more

Amazing Grandmother With Tooth In Her Eye

Blind woman regains sight with tooth for an eye   The procedure had been efficiently conducted in the U. S. before. However, it’s still amazing that...
Read more
Load more