The monotheistic Sikh faith accounts for around 20 million followers worldwide, but remains clouded in mystery in many parts of the world.

Sikhism’s spiritual home is the Punjab district of what we now recognise as India and Pakistan. Indeed, the majority of Sikhs live in Punjab province, India, which perhaps explains why such mystery continues to surround the religion as outsiders are less likely to come into contact with Sikhs than they are followers of more widespread religions.

But knowledge of Sikhism is growing and Billionaires is keen to continue to explore this great faith and the long and noble history of its people. Established in the 16th century, Sikhism is a young religion, but nonetheless steeped in rich tradition. The fact that many of Sikhism’s most important Gurus can be traced historically means plenty of tangible evidence about their lives and deeds exists, making it a particularly interesting line of research for us.

One element of the faith that particularly struck a chord with us is the importance placed on holy relics. With that in mind, we’ve looked at five of the religion’s most revered items that we’ve chosen for their fascinating stories. 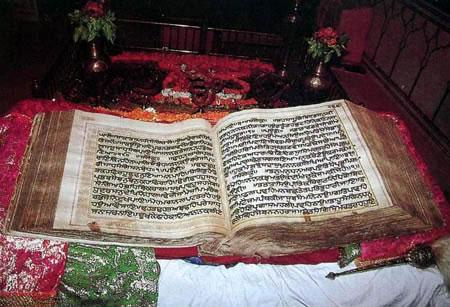 When we think of a Guru, the image that often springs to mind is of a holy man who can administer spiritual teaching to help people develop their faith. But in Sikhism the ultimate Guru is considered to be a holy book – the Guru Granth Sahib.

For Sikhs, the Gurus were the men who established and advanced their religion and its practices. There were 10 human Gurus, the last being Guru Gobind Singh. After making his own sacred additions to the text, the Guru declared Sikhism’s holy book would be his successor. By this action, the human lineage of the Sikh Gurus was concluded, and the Guru Granth Sahib enshrined as the final sovereign Guru.

The text is considered completely sacred by Sikhs; no-one is permitted to change or revise any of the writings contained within, as they contain a direct transmission of the wisdom of the 10 Gurus.

In 2008 the genteel world of Sotheby’s auction house in London was punctured when Sikhs staged passionate protests over a rare 18th-century steel armour plate thought to belong to the aforementioned Guru Gobhind Singh, one of the religion’s most esteemed figures.

Some of India’s most senior Sikhs mobilised to block Sotheby’s from putting the relic up for sale to outsiders, with Avtar Singh Makaar, President of the Sikh committee SGPC, arguing that the armour plate belonged in the Central Sikh Museum. Sotheby’s responded by saying it had received no information linking the piece directly to the Guru, but the pressure was enough to have the plate withdrawn from auction.

Sikh relics are so highly revered by the religion’s followers that the prospect of them being in the wrong place can lead to heated disputes, as we saw with the armour plate.

In 2008 the Punjab and Haryana high court commanded the Nabha family of New Delhi – known for its royal connections – to return a collection of Sikh relics that belonged to Guru Ghobind Singh to what was perceived to be their rightful home at the museum of Takht Kesgarh Sahib at Anandpur Sahib.

Three ornate swords, a turban, a cloak, a comb with hair and a manuscript comprised the collection. The relics were believed to have been looked after by Sufi Saint Peer Budhu Shah, who was fighting with his sons and disciples for the Guru against hill tribes when he came into possession of the items. How they came to be part of the Nabha family treasure in the first place is uncertain, but they are now back in Sikh hands.

Legend has it that Guru Tegh Bahadur performed a miracle when he visited Gurdwhara (a place of worship) in Varanasi, a city with huge significance for Sikhs and Hindus.

One morning the Guru was meditating in a small room known as the Tap Asthan, when Bhai Kalyan Mal, who owned the house, suggested he go for a dip in the holy Ganges river. In response, the Guru pointed out that God’s name is the holiest of all; the Ganges should come to them rather than the other way around. Seeing Kalyan Mal’s confusion, the Guru requested he lift a nearby stone. As soon as Kalyan Mal did, a spring of river-water gushed forth.

The sacred spring can still be visited at Baoli Ganga Pargat, and two ancient pairs of shoes, one once worn by the Guru, and his long, loose gown, known as a chola, are now on display as relics connected to this amazing tale. 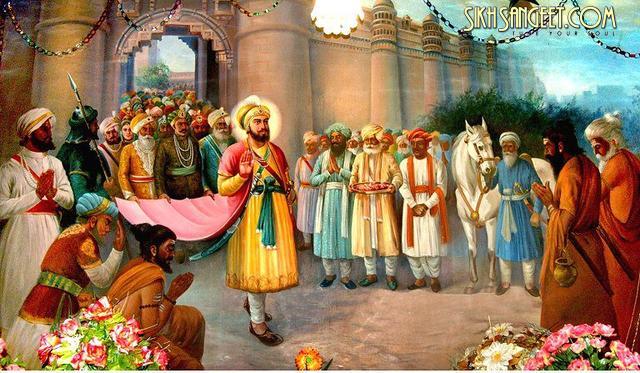 This year saw the restoration of a hugely significant piece of Sikh history, as a sacred robe that belonged to Guru Hargobind (the sixth Guru) was preserved just before Diwali.

Dating to the early 17th century, the lush robe was supposedly worn by the Guru on the day he liberated himself and 52 Hindu kings from a prison of the Mughal emperor Jahangir. The prisoners were told whoever held onto the Guru’s robe would be set free; the 52 each grasped a piece and they walked from the prison. Sikhs continue to celebrate this important event as the day of liberation.

The robe is today looked after by a village near Amritsar in north-west India called Ghudani Kalan. It was given to villagers there as a gift for their hospitality, and the relic was restored to its former glory by an expert team of conservators after the villagers – who zealously guard the artefact – approached them for help in 2011 when they realised the fabric was deteriorating.


Does religion cause more evil than it does good?