The genocide suffered by the Hindus of India at the hands of Arab, Turkish, Mughal and Afghan occupying forces for a period of 800 years is as yet formally unrecognised by the World.

[alert type=”alert-danger ” title=”Warning “]This content may not be appropriate for viewers of a few countries and below 18 years age group. This article is not published to hurt sentiments of a particular community but to aware people of history. Viewers discretion suggested. [/alert]

The only similar genocide in the recent past was that of the Jewish people at the hands of the Nazis. 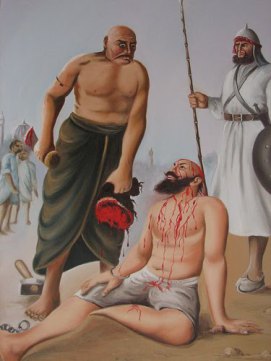 The holocaust of the Hindus in India was of even greater proportions, the only difference was that it continued for 800 years, till the brutal regimes were effectively overpowered in a life and death struggle by the Sikhs in the Panjab and the Hindu Maratha armies in other parts of India in the late 1700’s.

We have elaborate literary evidence of the World’s biggest holocaust from existing historical contemporary eyewitness accounts. The historians and biographers of the invading armies and subsequent rulers of India have left quite detailed records of the atrocities they committed in their day-to-day encounters with India’s Hindus.

These contemporary records boasted about and glorified the crimes that were committed – and the genocide of tens of millions of Hindus, mass rapes of Hindu women and the destruction of thousands of ancient Hindu / Buddhist temples and libraries have been well documented and provide solid proof of the World’s biggest holocaust.

Dr. Koenraad Elst in his article “Was There an Islamic Genocide of Hindus?” states:

“There is no official estimate of the total death toll of Hindus at the hands of Islam. A first glance at important testimonies by Muslim chroniclers suggests that, over 13 centuries and a territory as vast as the Subcontinent, Muslim Holy Warriors easily killed more Hindus than the 6 million of the Holocaust. Ferishtha lists several occasions when the Bahmani sultans in central India (1347-1528) killed a hundred thousand Hindus, which they set as a minimum goal whenever they felt like punishing the Hindus; and they were only a third-rank provincial dynasty.

The biggest slaughters took place during the raids of Mahmud Ghaznavi (ca. 1000 CE); during the actual conquest of North India by Mohammed Ghori and his lieutenants (1192 ff.); and under the Delhi Sultanate (1206-1526).“

He also writes in his book “Negation in India”:

“The Muslim conquests, down to the 16th century, were for the Hindus a pure struggle of life and death. Entire cities were burnt down and the populations massacred, with hundreds of thousands killed in every campaign, and similar numbers deported as slaves. Every new invader made (often literally) his hills of Hindus skulls. Thus, the conquest of Afghanistan in the year 1000 was followed by the annihilation of the Hindu population; the region is still called the Hindu Kush, i.e. Hindu slaughter.”

Will Durant argued in his 1935 book “The Story of Civilisation: Our Oriental Heritage” (page 459):

“The Mohammedan conquest of India is probably the bloodiest story in history. The Islamic historians and scholars have recorded with great glee and pride the slaughters of Hindus, forced conversions, abduction of Hindu women and children to slave markets and the destruction of temples carried out by the warriors of Islam during 800 AD to 1700 AD. Millions of Hindus were converted to Islam by sword during this period.”

“The massacres perpetuated by Muslims in India are unparalleled in history, bigger than the Holocaust of the Jews by the Nazis; or the massacre of the Armenians by the Turks; more extensive even than the slaughter of the South American native populations by the invading Spanish and Portuguese.”

Writer Fernand Braudel wrote in A History of Civilisations (1995), that Islamic rule in India as a

“colonial experiment” was “extremely violent”, and “the Muslims could not rule the country except by systematic terror. Cruelty was the norm – burnings, summary executions, crucifixions or impalements, inventive tortures. Hindu temples were destroyed to make way for mosques. On occasion there were forced conversions. If ever there were an uprising, it was instantly and savagely repressed: houses were burned, the countryside was laid waste, men were slaughtered and women were taken as slaves.”

“From the time Muslims started arriving, around 632 AD, the history of India becomes a long, monotonous series of murders, massacres, spoliations, and destructions. It is, as usual, in the name of ‘a holy war’ of their faith, of their sole God, that the barbarians have destroyed civilizations, wiped out entire races.”

Irfan Husain in his article “Demons from the Past” observes:

“While historical events should be judged in the context of their times, it cannot be denied that even in that bloody period of history, no mercy was shown to the Hindus unfortunate enough to be in the path of either the Arab conquerors of Sindh and south Punjab, or the Central Asians who swept in from Afghanistan…The Muslim heroes who figure larger than life in our history books committed some dreadful crimes. Mahmud of Ghazni, Qutb-ud-Din Aibak, Balban, Mohammed bin Qasim, and Sultan Mohammad Tughlak, all have blood-stained hands that the passage of years has not cleansed..Seen through Hindu eyes, the Muslim invasion of their homeland was an unmitigated disaster. 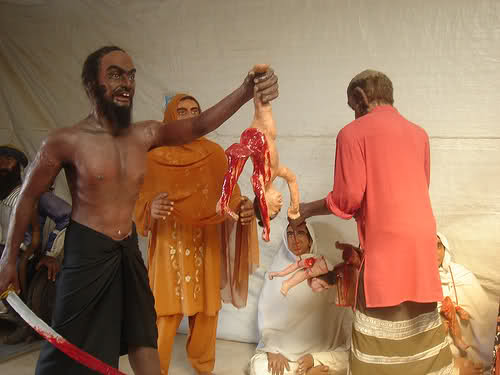 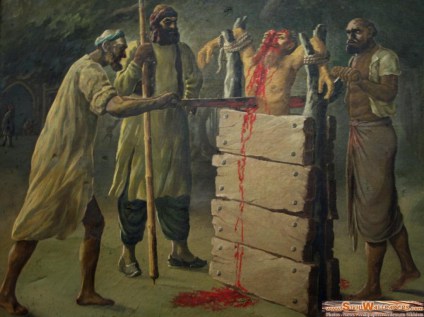 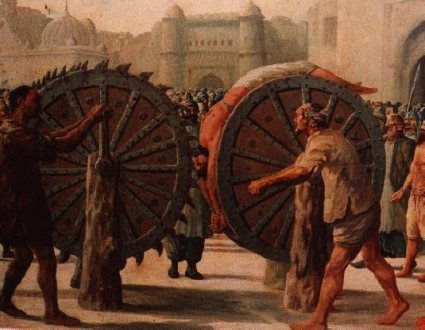 Islamic methods of punishment in India.

“Their temples were razed, their idols smashed, their women raped, their men killed or taken slaves. When Mahmud of Ghazni entered Somnath on one of his annual raids, he slaughtered all 50,000 inhabitants. Aibak killed and enslaved hundreds of thousands. The list of horrors is long and painful. These conquerors justified their deeds by claiming it was their religious duty to smite non-believers. Cloaking themselves in the banner of Islam, they claimed they were fighting for their faith when, in reality, they were indulging in straightforward slaughter and pillage…”

A sample of contemporary eyewitness accounts of the invaders and rulers, during the Indian conquests -The Afghan ruler Mahmud al-Ghazni invaded India no less than seventeen times between 1001 – 1026 AD. The book ‘Tarikh-i-Yamini’ – written by his secretary documents several episodes of his bloody military campaigns :

“The blood of the infidels flowed so copiously [at the Indian city of Thanesar] that the stream was discoloured, notwithstanding its purity, and people were unable to drink it…the infidels deserted the fort and tried to cross the foaming river…but many of them were slain, taken or drowned… Nearly fifty thousand men were killed.”

In the contemporary record – ‘ Taj-ul-Ma’asir’ by Hassn Nizam-i-Naishapuri, it is stated that when Qutb-ul- Din Aibak (of Turko – Afghan origin and the First Sultan of Delhi 1194-1210 AD) conquered Meerat, he demolished all the Hindu temples of the city and erected mosques on their sites. In the city of Aligarh, he converted Hindu inhabitants to Islam by the sword and beheaded all those who adhered to their own religion.

The Persian historian Wassaf writes in his book ‘Tazjiyat-ul-Amsar wa Tajriyat ul Asar’ that when the Alaul-Din Khilji (An Afghan of Turkish origin and second ruler of the Khilji Dynasty in India 1295-1316 AD) captured the city of Kambayat at the head of the gulf of Cambay, he killed the adult male Hindu inhabitants for the glory of Islam, set flowing rivers of blood, sent the women of the country with all their gold, silver, and jewels, to his own home, and made about twentv thousand Hindu maidens his private slaves. 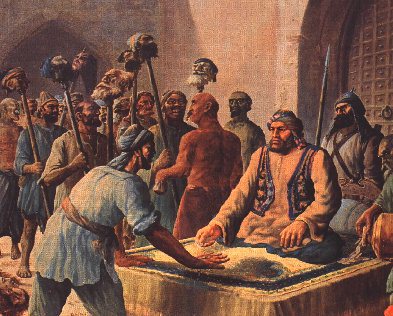 ” In AH 934 (2538 C.E.) I attacked Chanderi and by the grace of Allah captured it in a few hours.  We got the infidels slaughtered and the place which had been Daru’l-Harb (nation of non-muslims) for years was made into a Daru’l-Islam (a muslim nation).”

In Babur’s own words in a poem about killing Hindus (From the ‘Baburnama’ ) he wrote :

“For the sake of Islam I became a wanderer,
I battled infidels and Hindus,
I determined to become a martyr
Thank God I became a Killer of Non-Muslims!“

The atrocities of the Mughal ruler Shah Jahan (who ruled India between 1628 – 1658 AD) are mentioned in the contemporary record called : ‘Badshah Nama, Qazinivi & Badshah Nama , Lahori’ and goes on to state :

“When Shuja was appointed as governor of Kabul he carried on a ruthless war in the Hindu territory beyond Indus…The sword of Islam yielded a rich crop of converts….Most of the women (to save their honour) burnt themselves to death. Those captured were distributed among Muslim Mansabdars (Noblemen)”

The Afghan ruler Ahmad Shah Abdali attacked India in 1757 AD and made his way to the holy Hindu city of Mathura, the Bethlehem of the Hindus and birthplace of Krishna.

The atrocities that followed are recorded in the contemporary chronicle called : ‘Tarikh-I-Alamgiri’ :

“Abdali’s soldiers would be paid  5 Rupees (a sizeable amount at the time) for every enemy head brought in. Every horseman had loaded up all his horses with the plundered property, and atop of it rode the girl-captives and the slaves. The severed heads were tied up in rugs like bundles of grain and placed on the heads of the captives…Then the heads were stuck upon lances and taken to the gate of the chief minister for payment.

“It was an extraordinary display! Daily did this manner of slaughter and plundering proceed. And at night the shrieks of the women captives who were being raped, deafened the ears of the people…All those heads that had been cut off were built into pillars, and the captive men upon whose heads those bloody bundles had been brought in, were made to grind corn, and then their heads too were cut off. These things went on all the way to the city of Agra, nor was any part of the country spared.”

Why we should remember

The biggest holocaust in World History has been whitewashed from history.

When we hear the word HOLOCAUST most of us think immediately of the Jewish holocaust. Today, with increased awareness and countless cinema films and television documentaries – many of us are also aware of the Holocaust of the Native American peoples, the genocide of the Armenian peoples in the Ottoman Empire, and the millions of African lives lost during the Atlantic slave trade. 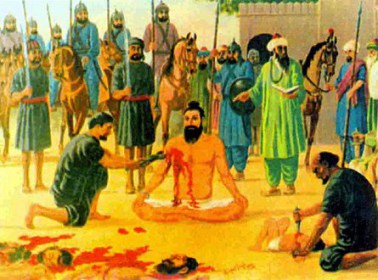 The Indian historian Professor K.S. Lal estimates that the Hindu population in India decreased by 80 million between 1000 AD and 1525 AD, an extermination unparalleled in World history. This slaughter of millions of people occurred over regular periods during many centuries of Arab, Afghan, Turkish and Mughal rule in India.

Many Indian heroes emerged during these dark times – including the 10th Sikh Guru – Guru Gobind Singh and also the Hindu Maratha king – Shivaji Maratha – who led the resistance against this tyranny and eventually led to its defeat by the late 1700s – after centuries of death and destruction.

The modern World today is facing a global threat from organizations and groups of terrorists such as the Taliban and Al-Qaeeda – whose ideology is chillingly similar to that of the perpetrators of the World’s biggest holocaust in India. Also ironically – these terrorist groups are growing and launching attacks in exactly those areas that suffered extensively during India’s holocaust. Let us hope that the bloody lessons of the past are learnt so that history does not even have the remotest chance of repeating itself.

For rest of the article kindly visit here