Japan's Yakuza have been a thorn in the side of Japanese authorities for years. But what role do they play in the country? And...
Read more
Opinion

THE Old Town in Tallinn, the capital of Estonia, does not look like a den of thieves. On a summer afternoon, herds of elderly tourists—American, Japanese, British—wander between the gift shops and sip lagers at pavement cafés beneath the gothic town hall. In a park, teenagers chat and smoke cigarettes in the sun.

Valdo Pôder, a local police officer, remembers when it was quite different. In the mid-1990s curtains rose at the city’s theatres at six o’clock so that the audience could get home before sunset. Young men hung around selling bootleg vodka. The streetlights were always smashed. Pointing to one smart-looking bar Mr Pôder says he would have needed a team of at least ten officers to raid it. “We’d have to put everyone inside on the floor,” he says. “Or else we might get shot at.”

Crime in Estonia has fallen precipitously. Since 1995, the country’s murder rate has dropped by 70%, and robbery and car theft have fallen almost as far. Even as the country entered a deep recession in 2009, which pushed unemployment up to 19%, the crime rate kept falling. But though the magnitude of this trend sets post-Soviet Estonia apart, its direction does not. Across the developed world, the crime wave that began in the 1950s is in broad retreat.

Both police records (which underestimate some types of crime) and surveys of victims (which should not, but are not as regularly available a source of data) show crime against the person and against property falling over the past ten years in most rich countries. In America the fall began around 1991; in Britain it began around 1995, though the murder rate followed only in the mid-2000s. In France, property crime rose until 2001—but it has fallen by a third since. Some crimes are all but disappearing. In 1997, some 400,000 cars were reported stolen in England and Wales: in 2012, just 86,000.

Once upon a time in America
Cities have seen the greatest progress. The number of violent crimes has fallen by 32% since 1990 across America as a whole; in the biggest cities, it has fallen by 64%. In New York, the area around Times Square on 42nd Street, where pornographers once mingled with muggers, is now a family oriented tourist trap. On London’s housing estates, children play in concrete corridors once used by heroin addicts to shoot up. In Tallinn you can walk home from the theatre unmolested as late as you like.

What is behind this spectacular and widespread improvement? Demographic trends are an obvious factor. The baby-boom in the decades after the second world war created a bubble in the 16- to 24-year-old population a couple of decades later, and most crimes are committed by men of that age. That bubble is now long deflated. In most Western countries, the population is ageing, often quite fast.

But demographics are not everything. Mark Simmons, a deputy assistant commissioner for the Metropolitan Police in London, points out that the number of 18- to 24-year-old men in the city has been increasing in recent years, and yet the decline in crime has continued. The sheer magnitude of the improvement in places such as New York and Los Angeles, where the incidence of some crimes has fallen by as much as 90%, cannot be explained just by a young-person deficit. 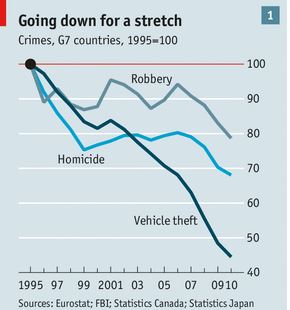 Steven Levitt, an economist at the University of Chicago, has argued that the legalisation of abortion in the 1970s cut America’s crime rate by reducing the number of children growing up in inner-city poverty and thus predisposed to criminality. But that cannot explain why rates have kept falling long after such an effect should have tapered off, or why crime rates in Britain, where abortion has been legal for longer, began falling later. Jessica Wolpaw Reyes, an American researcher, has argued that the cognitive effects of exposure to lead were a primary determinant of violent crime, and unleaded petrol is to thank for the improvement. But the causal link is far from proven.

Could more criminals being locked up be the answer? The number of people behind bars has grown substantially in many countries over the past 20 years. In Britain the prison population doubled between 1993 and 2012; in Australia and America, it almost doubled. But several countries, including Canada, the Netherlands and Estonia, have reduced their prison populations without seeing any spike in crime; so too have some American states such as New York, where crime rates have fallen fastest. Prison takes existing criminals off the streets. But in many places, the drop in crime seems to be down to people not becoming criminals in the first place. Between 2007 and 2012 the number of people convicted of an offence for the first time in Britain fell by 44%.

Better policing is a more convincing explanation than bigger prisons: the expectation of being caught undoubtedly deters criminals. In New York and Los Angeles, where crime has fallen further and faster than almost anywhere, Bill Bratton, a former police chief of both cities, is often credited for the turnaround. Partly, that is thanks to higher standards. Today’s LAPD is a far cry from the racist, corrupt and scandal-ridden force of the 1990s. But tactics have also changed.

Hot fuzz
A combination of officers talking to the people whose neighbourhoods they police and intensive targeting of crime “hotspots” has transformed the way streets are protected. In the 1990s, Mr Bratton embraced data-driven “CompStat” policing, targeting the most blighted districts with huge numbers of officers. The biggest subsequent crime drops were extremely localised: for example, in the area around Canal Street in Lower Manhattan, the murder rate fell from 29 per 100,000 residents in 1990 to around 1.5 by 2009.

According to Lawrence Sherman, a criminologist at the University of Cambridge, such tactics have now worked in places as different as Sweden and Trinidad and Tobago. In Chicago, where crime has been slower to fall than elsewhere, local politicians this year thanked hotspot methods for the lowest murder rate in half a century. Technology has improved the effectiveness of detective work too. The advent of DNA testing, mobile-phone location and surveillance cameras—which have spread rapidly, especially in Britain—have all increased the risk of getting caught. 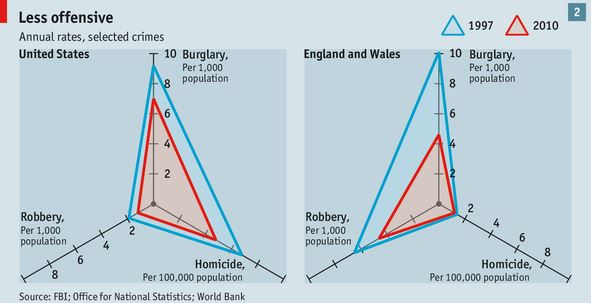 Some broad social changes have probably helped. In most countries young people are increasingly sober and well behaved. They are more likely to live with their parents and to be in higher education—across the European Union 28% of adults aged 25-34 still live at home. In Britain, the current generation of 18- to 24-year-olds is a lot less likely to have tried an illegal drug or to drink than those ten years older were at their age, and the same is true in most European countries. In most countries wife-beating has become more stigmatised and less common: since 1994, self-reported domestic violence has fallen by three-quarters in Britain and two-thirds in America.

In America, the end of the crack-cocaine epidemic in the 1990s is widely credited with reducing crime. In Europe, the explosion in heroin use that accompanied the high unemployment of the 1980s has largely receded, even though hard economic times are back. Junkies are older and fewer; in Rotterdam, there is now a state-sponsored hostel for elderly heroin addicts. A lot of people in the rich world still take illegal drugs, but they tend to be drugs that they pay for out of what they earn, not what they steal.

The repopulation of inner cities is probably also a help. A middle-class exodus to the suburbs of the 1950s and 1960s often left behind inner cities blighted by derelict properties and concentrated poverty. George Kelling, the American criminologist who first developed the idea that seemingly small signs of dereliction—such as broken windows—can encourage more significant criminality, points out that inner-centre neighbourhoods such as Harlem in New York, or Amsterdam’s Nieuwmarkt district, have been reclaimed by the well-off. The windows have been mended. Gentrifiers may not always be popular, but they set up neighbourhood watch meetings, clean up empty spaces and lobby politicians to take crime more seriously. They may be a consequence of falling crime that lowers crime further.

The last category of explanations is perhaps the most intriguing: that criminals simply have fewer opportunities. Jan van Dijk, a criminologist based at Tilburg University in the Netherlands, points out that in the 1950s and 1960s millions of people across the Western world acquired cars, televisions, record players, jewellery and so on for the first time; rich pickings for those who would steal them. In the decades since, those same people have added burglar alarms, window locks and safe deposit boxes. Between 1995 and 2011, the proportion of British households with burglar alarms increased by half, to 29%. And some things once worth stealing from people’s homes have become less valuable. There is little point in burgling a house to steal a DVD player worth $30.

Bellman and true
Shops have invested heavily in security, installing clever gates and tags to deter shoplifters and employing ever more guards. In fact, private security is booming in many places. The number of guards employed in Europe has increased by 90% over the past decade, and they now outnumber police officers. Security vans are now harder to knock off and are often followed by police cars. Fewer businesses handle lots of cash. Those that do keep less on the premises.

Armed robbery has been particularly hard hit by reduced opportunities. In 1950s London, professional criminals—often ex-servicemen—used explosives to crack the safes of factories and banks. When safes toughened up, the hard men moved on to holding up banks. As banks put up shutters and alarms, bulletproof partitions and surveillance cameras, they turned to robbing less secure building societies. By the 1990s it was betting shops and off-licences (liquor stores). Now there are few armed robberies at all. As Roger Matthews of the University of Kent puts it: “You might make a thousand pounds and you’ll get caught. What’s the point?”

What makes a great leader? Management theorist Simon Sinek suggests, it's someone who makes their employees feel secure, who draws staffers into a circle...
Read more

Hero dog saves owner, who is not actually...

Hero dog saves owner, who is not actually drowning Just when you thought dogs had reached peak amazingness, this pup shows up to blow everyone...
Read more

Have you ever seen a diving Elephant? Japanese Zoo Builds Swimming Pool For Elephants. A mammoth-sized swimming pool has been built at the foot...
Read more

6 Reasons Why You Should Not Go Around...

You cannot get anything for free. Nowadays people buy and sell almost everything. Our era is also called the era of consumerism. Wherever you...
Read more

Google and students at the Berghs School of Communication in Stockholm, Sweden are working on an incredible new translation tool that will give mute...
Read more
Load more