The Most Amazing Sculptures From All Around The World

Almost every city has its own creative sculptures or statues, usually tucked along streets or city squares. Some of them are pretty ordinary, others...
Read more

The skyline of the seaside town of Ilfracombe in north Devon, England, is about to change, and not many residents are happy about it. A 20 meter high statue of a naked pregnant women wielding a sword is being erected on the coast. One side the woman’s skin is peeled back, revealing her skull, muscles and developing foetus in her stomach. The woman also carries a sword in her up stretched arm, and has scales hidden behind her back. Amazing yet controversial work by Damien Hirst.

The bronze statue called “Verity” is the creation of the controversial English artist Damien Hirst who lives locally and owns a restaurant in the town. According to Hirst, “Verity” is a modern-day allegory for truth and justice. The figure’s stance is taken from Edgar Degas’s ‘Little Dancer of Fourteen Years’ which the artist used in his earlier bronze creation “Virgin Mother”.

Hirst’s statue has been loaned to the local authority by the artist for 20 years and will stand by the town’s pier.

Hundreds of residents wrote to the council to object, with one saying it would ‘encourage teenage pregnancies’. Another said it was ‘demeaning to women’ while a third claimed it was ‘eccentricity posturing as art’. It has been called every derogatory word in the book – outrageous, immoral, bizarre, offensive, distasteful, embarrassing, grotesque, disrespectful, insensitive, inappropriate, a monstrosity, tasteless, ugly, vulgar and of no artistic merit.

But still the council has agreed to let this sculpture take pride of place on the idyllic British coastline at Ilfracombe. 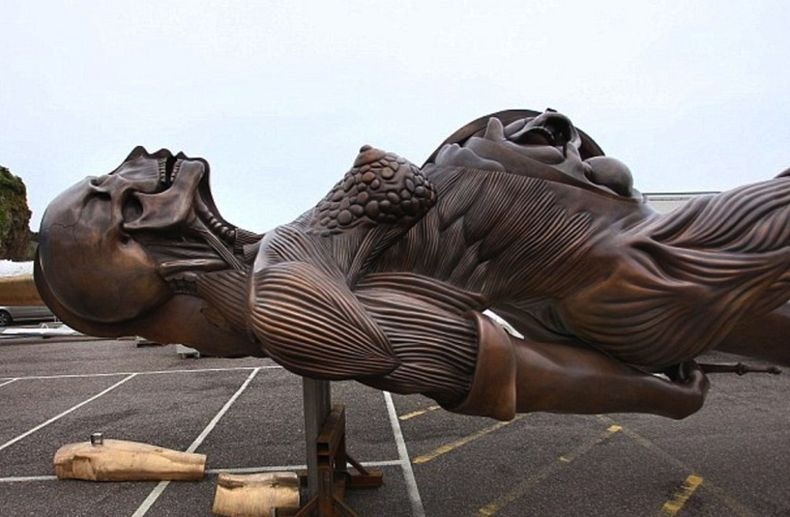 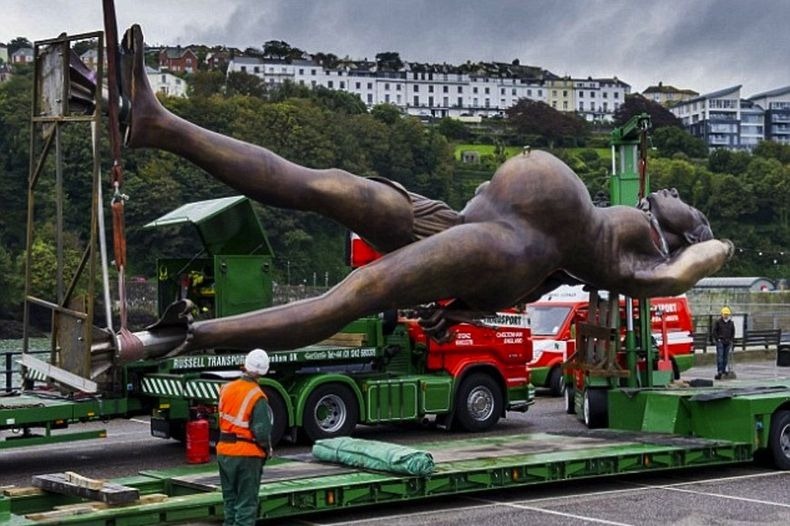 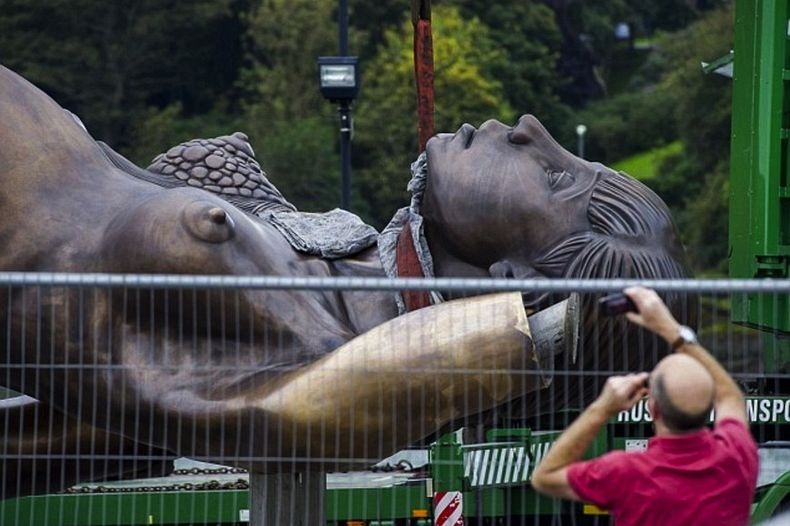 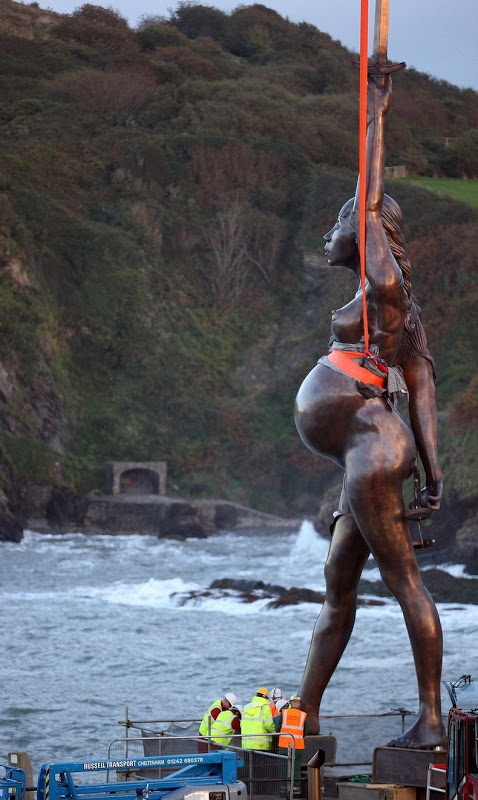 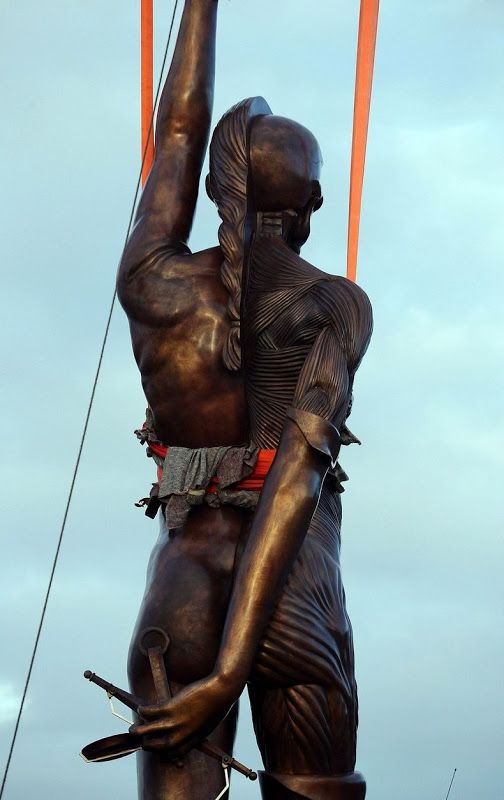 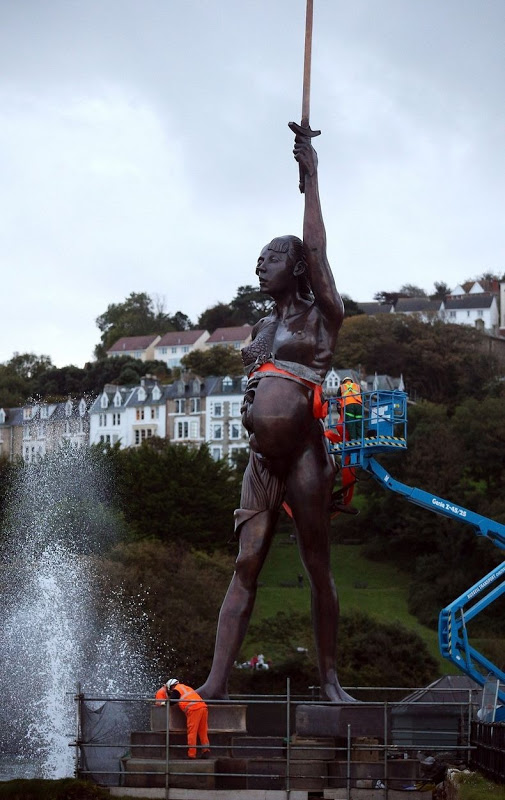 “We’ve relied, as a holiday resort, on our natural charm and beauty, but that’s not enough in the present day. Hotels are closing, so we’ve got to do something to boost the economy and we’re looking at the arts as a way of encouraging visitors,” says Ilfracombe councillor Mike Edmunds.

‘Verity‘ was made in over forty individual castings at Pangolin Editions foundry in Gloucestershire. The frame was fabricated in a single piece of stainless steel. The bronze parts were cast in pieces using sand moulds, which were then metalworked and reassembled around the steel frame. The sword and upper arm is a single piece of glass fibre reinforced polymer and the entire piece underwent significant windtunnel testing in order to ensure it was capable of withstanding the extreme force of high winds and sea spray. 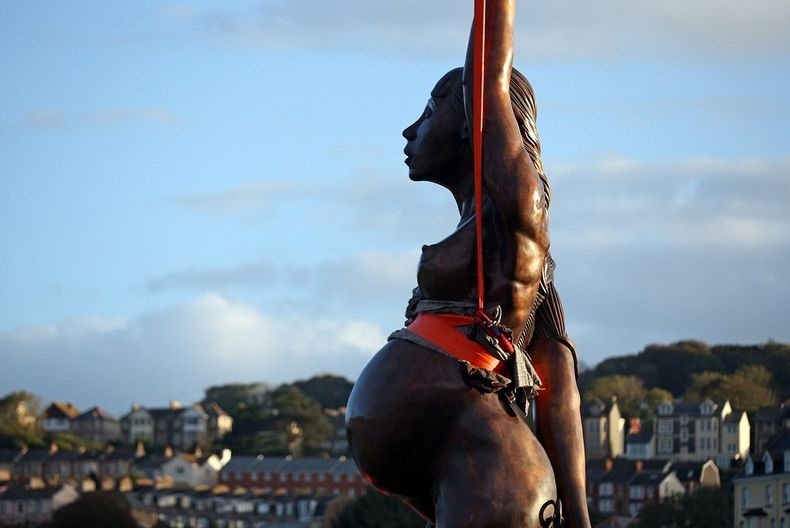 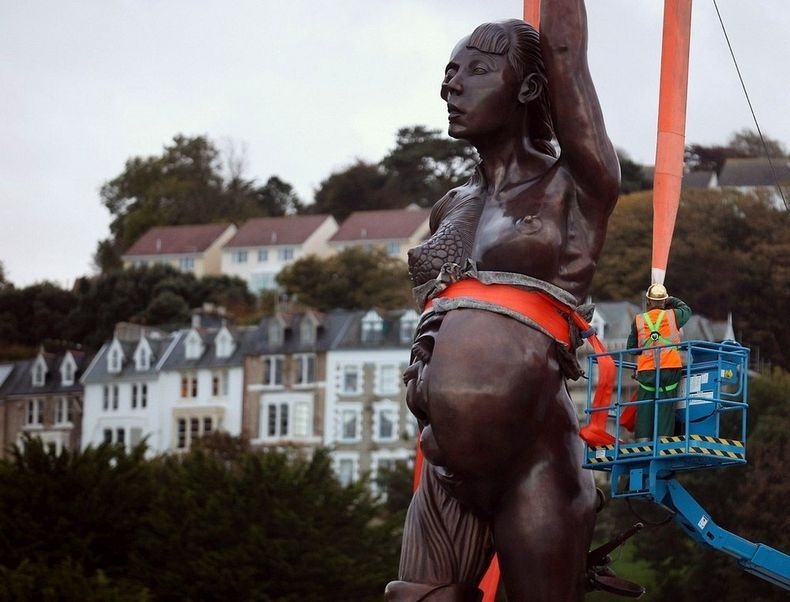 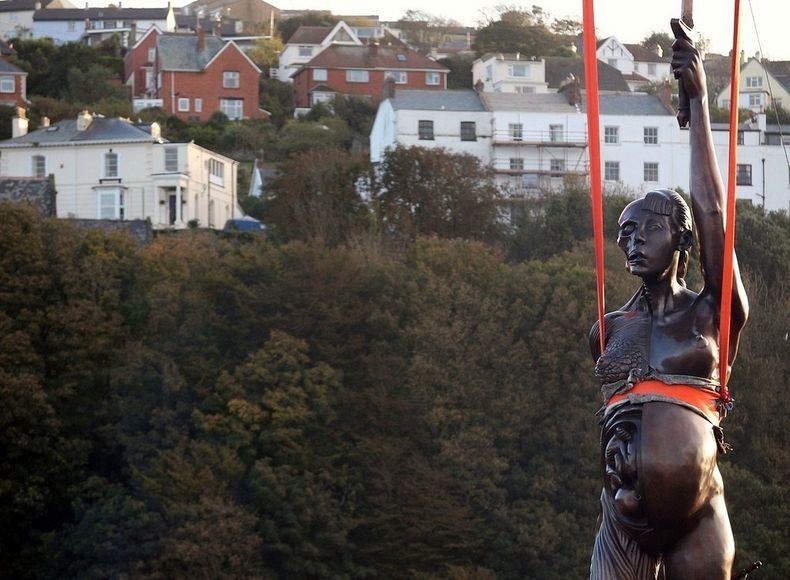 It was their first glimpse of the controversial statue by Damien Hirst which has stirred up controversy since he announced plans earlier this year to “loan” it to Ilfracombe, Devon, until 2032.

The council has received more than 100 complaints from locals who have described the work of art as “obscene and disgusting.”

It is now being kept in a temporary compound on site at the entrance to the harbour while contractors continue to work on the sculpture.

1. Incredible Sculptures by John Lopez of Lemmon, South Dakota will blow your mind

Hey Guys What's Up ! This Time we have found something related to childhood, most amazing memory in everyone's life. Some Creative fellas just...
Read more

Actual Business Cards Of The World’s Most Famous...

Have you ever wondered what some of the most famous personalities in the world had on their business cards? I mean, if you're a...
Read more

Bhagwant Mann is an Aam Aaadmi Party elected M.P. Recently he got very much publicity for his great poem in parliament. But prior to...
Read more

Wondering where to get that MBA from? Try...

Want to be a billionaire and wondering which business school to go to? You should probably try Harvard University, at least that's what a...
Read more
Load more