Hanuman is an ardent devotee of Sri Rama. He is one of the central figures in the Hindu epic Ramayana and its various versions. As one of the Chiranjivi, he is also mentioned in several other texts, including the Mahabharata, the various Puranas and some Jain texts. Hanuman participated in Rama’s war against the demon king Ravana. Several later texts also present him as an incarnation of Shiva. He is the son of Anjana and Kesari and is also described as the son of the wind-god Pawan, who according to several stories, played a role in his birth.

Hanuman is mentioned in both the Hindu epics, Ramayana and Mahabharata.The word “Vrsakapi” or “Vrishakapi”, later used as an epithet for Hanuman,is mentioned in the Rigveda (X:86). Some writers, such as Nilakantha (author of Mantra Ramayana) believe that the Vrishakapi of Rigveda alludes to Hanuman. However, other scholars believe that Hanuman is not mentioned in the Vedic mythology: the “Vrsakapi” of Rigveda refers to another deity or is a common name for the monkeys. 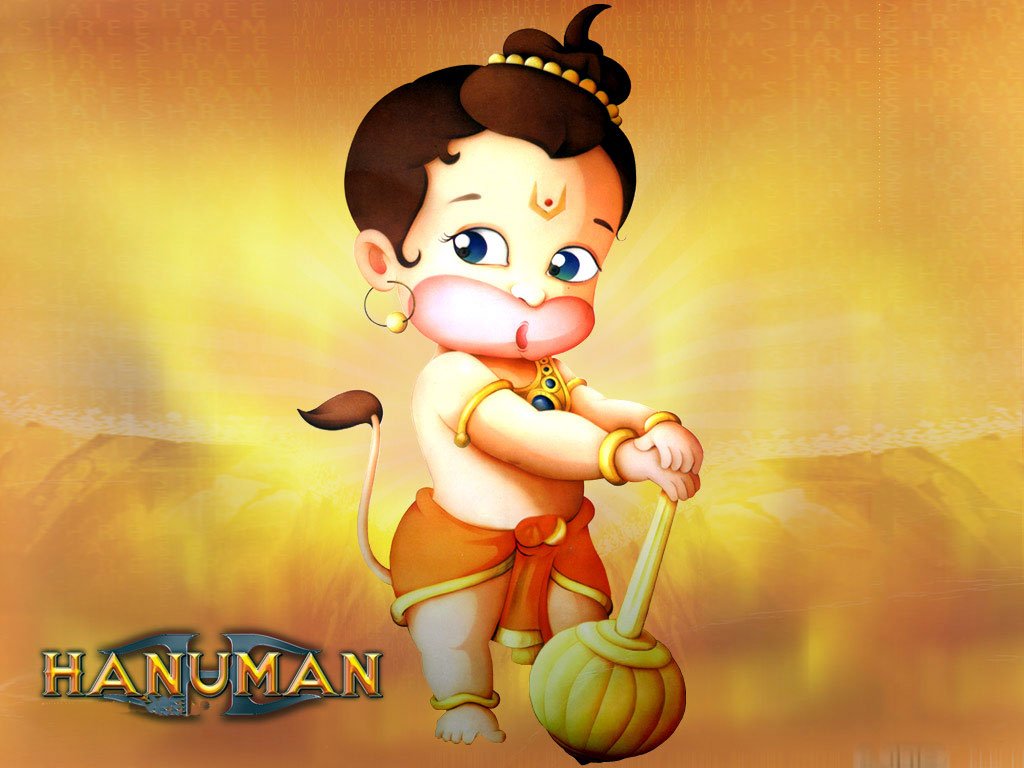 When Lord Vishnu decided to incarnate on earth in the form of Rama, Lord Shiva professed his desire to serve him. Shiva’s intention perturbs Sati as she would have to stay apart from her beloved husband. Learning of Sati’s concern, Shiva promised to send only a portion of him to earth so that he could fulfil both the purposes. But the form which Shiva should adopt for his reincarnation became a cause of great distress to both Sati and Shiva. Finally after much deliberation, Shiva decided to assume the form of a monkey, as the humble creature can sustain with a simple lifestyle and is free of all bondages of caste and traditions. Thus he took birth in the form of Hanuman, who served Lord Rama with utmost devotion.

2. Pawanputra Hanuman Was An Incarnation Of Lord Shiva. 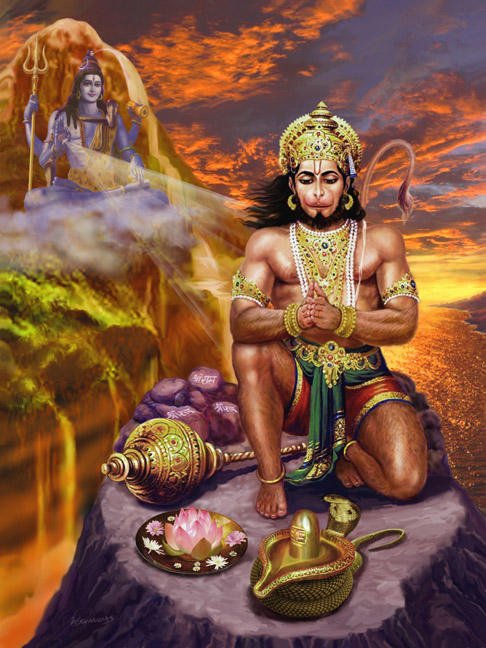 Hanuman was the son of Anjana and the monkey king Kesari. Anjana was an ethereal fairy who served in the celestial palace of Lord Brahma and was apparently self-obsessed and egotistical. In her vanity, once she enraged a sage who in turn cursed the divine beauty that her beautiful face would morph into one that of a monkey the moment she falls in love. Lord Brahma took pity on Anjana and sent her to earth where she was smitten by Kesari. The two then exchanged nuptial vows.

Anjana who was a zealous devotee of Lord Shiva wished for the Lord to take birth as her son. Thus she set about meditating to appease the God. In the end Shiva granted her the boon that he will incarnate on this earth as her offspring.

3. It was not his parents who gave the name Hanuman.

Anjana and Kesari gave their child the name, Bajrang. The story of Bajrang to Hanuman is very interesting. Some days after the birth of Hanuman,her father was out and mother went to bring food to him. At the time of their departure, the child was sleeping. But after some time, he woke up from the sleep because of being hungry. The little Bajrang looked around, there were not a sign of their parents.Suddenly, the bright sun was noticed by him. He thought the reddish sun was a fruit. Without wasting time, Hanuman flew towards Surya Deva (ability to fly is given to him by Vayu Deva who is considered as his father). That was the day of a Solar Eclipse and Rahu was also approaching the sun to engulf it.But he became terrified of a little monkey who was approaching the sun with a tremendous speed. He met Indra to complain about him. Indra became furious and applied his Vajrayudha against Hanuman.The weapon hit on his jaw and he fell down on the earth unconsciously. This made Vayu angry and he didn’t blow after that.After hearing the problem from Devas, Brahma made the child open his eyes. Many Devas gave boons to please Vayu.There was a permanent mark on the face of Hanuman which indicated the impact of Vajrayudha. In Sanskrit, Hanu means jaw and man means disfigured. That’s why he got the name.

4. Hanuman fought lord Rama in a battle and Won. 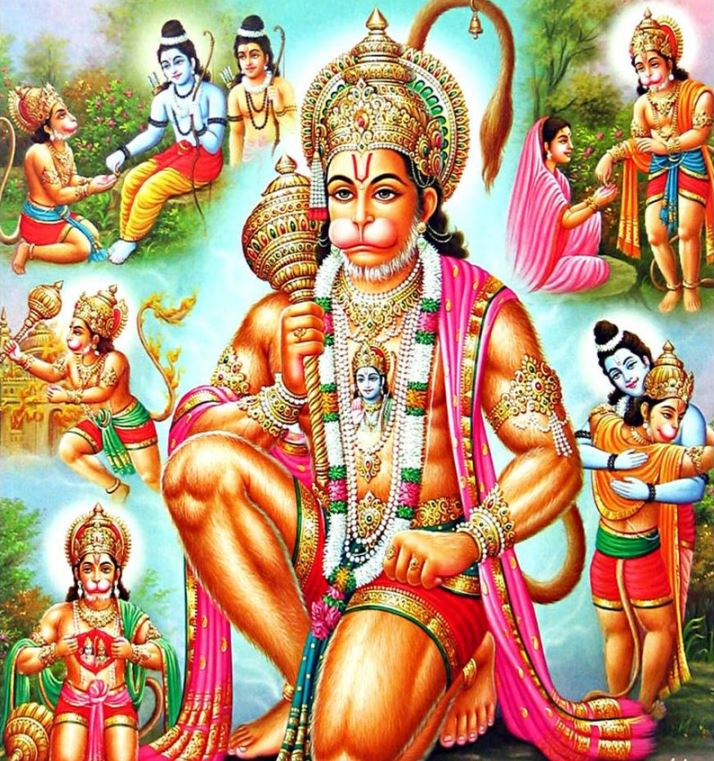 Rama was ordered by sage Vishwamithra to kill Yayati. Sensing the danger, Yayathi went to Hanuman for help, who in turn promised that he would save Yayati from any kind of danger. Hanuman did not use any weapon in his battle, instead stood chanting Rama’s name in the battle field. The arrows from lord Rama’s bow did not have any effect on Hanuman. Lord Rama then gave up and sage Vishwamithra relieved Rama of his word seeing the devotion and courage of Hanuman. 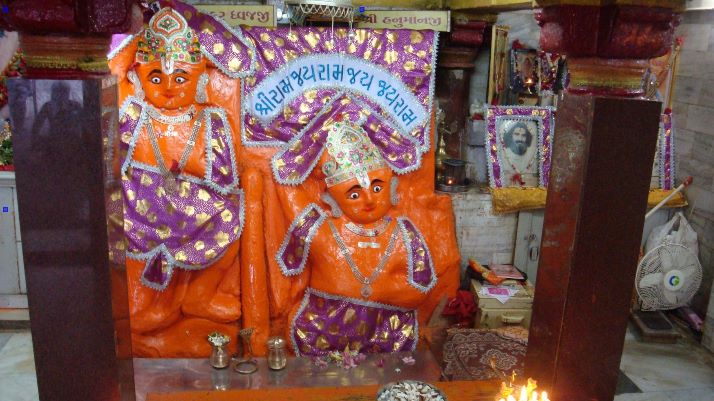 Hanuman’s Son Makar Dhwaja was born to a mighty fish of the same name when Hanuman after burning the entire Lanka with his tail had dipped in the sea to cool off his body. It is said that his sweat was swallowed by the fish and thus was Makar Dhwaja conceived. The fish was caught by Ravana’s step brother Ahiravana who ruled Patal, the nether world. When Makar Dhwaja grew up, Ahiravana was impressed by his strength and virility. He then made him his soldier.

Hanuman had lost in a duel with Makar Dhwaja when he went to rescue Rama and Laxman whom Ahiravana had kidnapped. Later, Hanuman killed Ahiravana and made his son Makardhwaja, the king and left the place with Lord Rama and his brother Laxman.

6. Jambavantha had to remind Hanuman of his Powers.

Lord Hanuman had earned the reputation of being notorious during his childhood. He used to pester meditating hermits, who had taken refuge in the kingdom of his father, King Kesari. During one such incident, an annoyed sage had hexed Hanuman. Due to the spell Hanuman was unable to remember the powers vested in him by the deities unless someone reminded him of it. When Sita was kidnapped by Ravana, Jambavantha had to remind Hanuman of his powers, so that he could pursue the search for Sita.

7. Lord Hanuman and Lord Bhima were both Brothers. 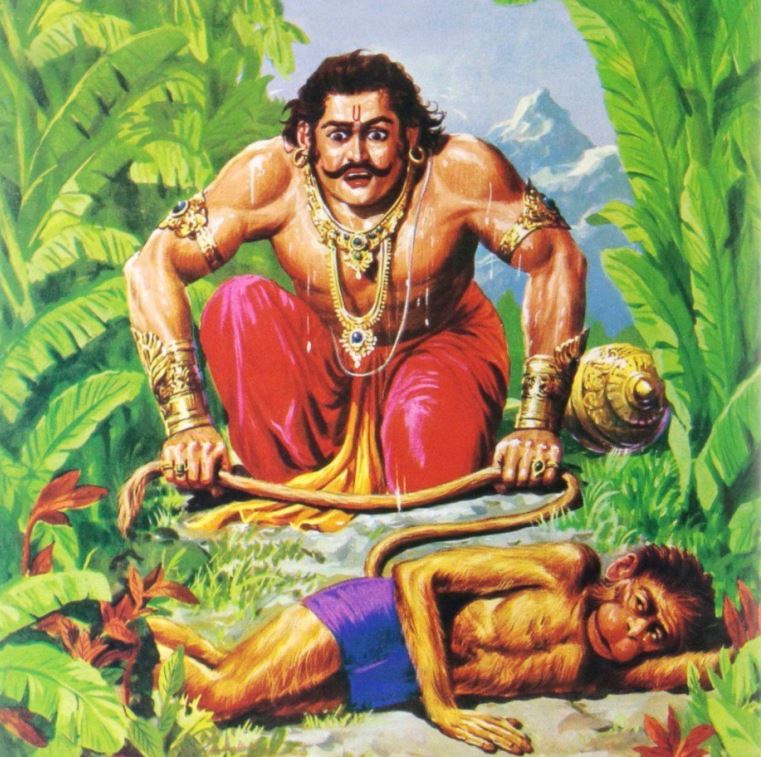 Bhima was also the son of Vayu (the Lord of the Winds). One day, when Bhima was searching for a flower his wife wanted, he saw a monkey sleeping with his tail crossing the path. He asked him to move his tail. But the monkey didn’t do it and asked Bhima to move it. Bhima was very arrogant with his strength. Nevertheless, he couldn’t move or lift the tail. Therefore, he realized that this was not a mere ordinary monkey. It was none other than Hanuman. He lied there just to reduce the arrogance of Bhima.

8. Why Lord Hanuman is Covered with Sindhoor. 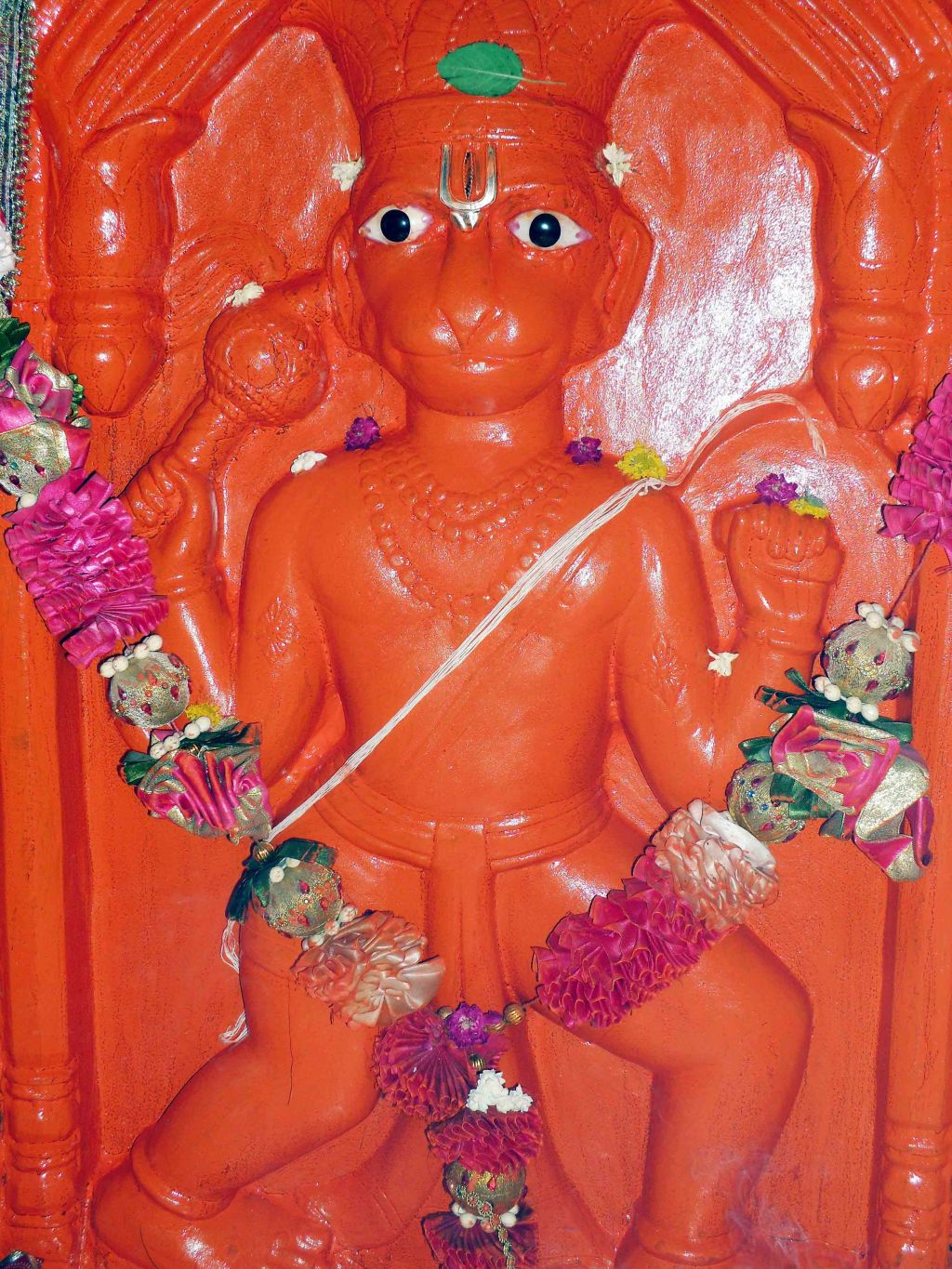 after exile was over and Lord Rama & mata Sita were back to Ayodhya .one day Hanumanji saw mata Sita wearing sindhoor and asked with curiosity about the same . Sita replied as per retuals wearing sindhoor will result a long life & well being of Lord Rama. than Hanuman, the biggest devotee of Rama thought if a pinch of sindoor in the hair can increase the longevity of Lord Rama then why not apply on the entire body. 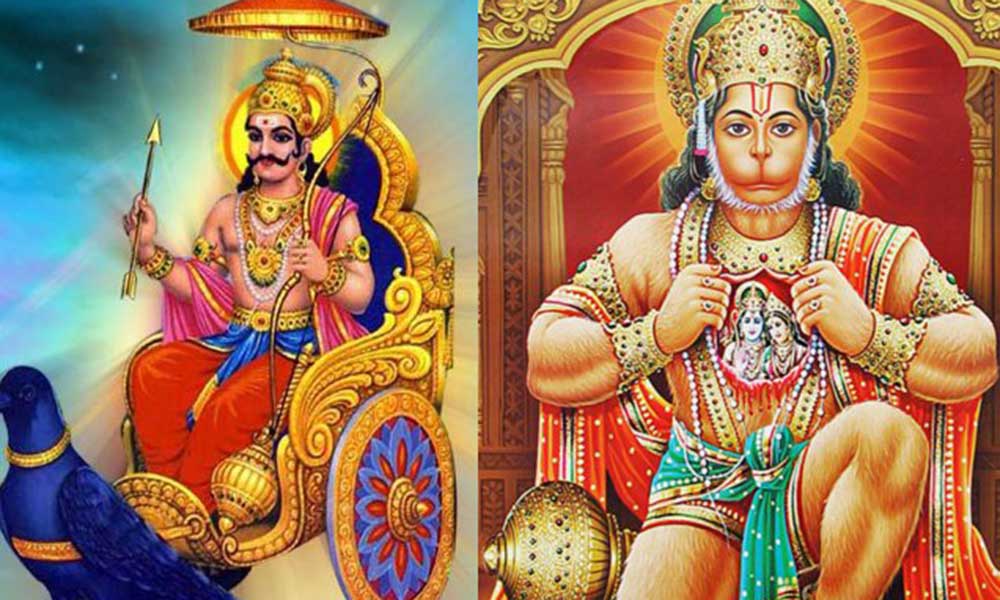 Lord Shani is one angry god and it is really difficult to please him. However, it is said that if you are a disciple of Lord Hanuman, you need not fear Lord Shani. This is because it has been mentioned in Purans that – During Rams’s quest to free Sita from the clutches of Ravana, it was Hanuman who flew across the sea to reach the demons king’s palace and discovered the whereabouts of Sita.

When Ram decided to leave for the heavenly abode, many including his wife Sita and Lakshman followed him. But his most ardent devotee vowed that he would stay on this earth for as long as the name of Rama is chanted by its inhabitants. Hanuman is one among the 7 Chiranjivis or immortals, according to the Hindu traditions, who will live until the beginning of the next Satya Yuga

He is believed to be alive even today keeping a close watch on every human being.

11. Hanuman In Mahabharat: On Arjuna’s Chariot. 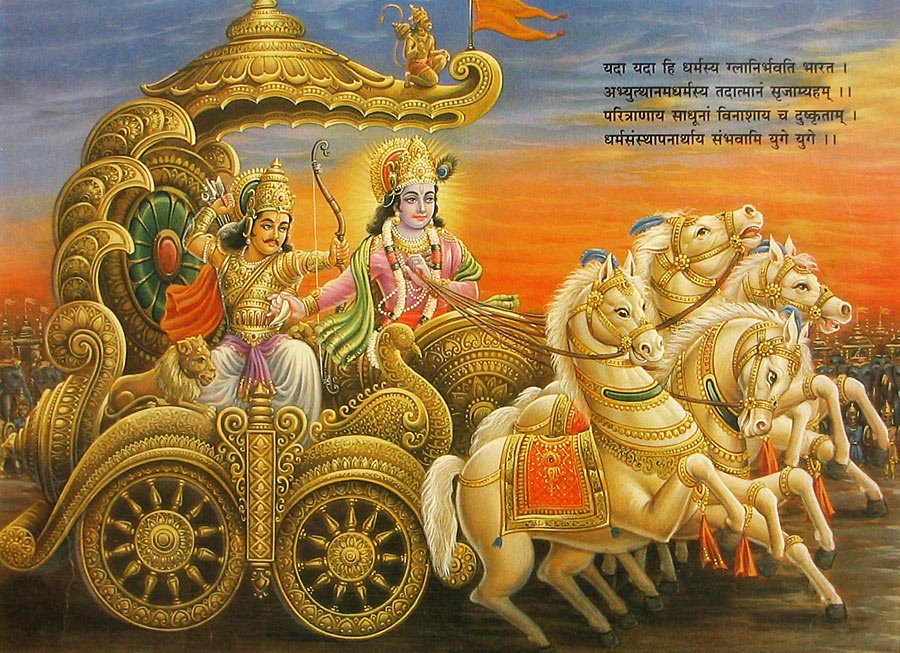 Arjuna was a skilled archer and was capable of conjuring wonders with his arrows.

During the Mahabharata war, he requested Lord Hanuman to be present on his chariot to which Hanuman asked him to prove his mettle. Arjuna then claimed that he could reconstruct the bridge Rama’s army had built to cross the ocean. Intrigued by his claims, Hanuman challenged him to create a bridge that would be able to withstand his weight. He promised that if Arjuna succeeded in the task, Hanuman would accompany him on his chariot. An eager Arjuna, created the bridge in a jiffy but it collapsed even faster as soon as Hanuman set foot on it. A crestfallen Arjuna approached Lord Krishna who convinced Hanuman that Arjuna should be given another chance. With Krishna’s blessing Arjuna built the bridge again, and this time it did not crumble under Hanuman’s weight. Hanuman then realised the fact that Krishna was an incarnation of his revered Lord Vishnu and was overwhelmed. He agreed to aid Arjuna in his battles with the Kauravas and thus Arjuna’s chariot featured Hanuman on its flag.

After the battle of Kurukshetra, Krishna asked Arjuna to step down the chariot. Krishna thanked Hanuman to stay with them during the war in the form of a flag on the chariot. Hanuman came in his original form, bowed to Krishna and flew away. As soon as he left, the chariot turned into ashes. Krishna explained to a shocked Arjuna, that the chariot would have burnt long time back due to the effects of celestial weapons thrown at it during the war. However, Lord Hanuman protected it.

12. Women Are Not Allowed To Touch Hanuman’s Feet.

There’s a common saying about Lord Hanuman that women can’t worship him as he is a bal Brahmachari. While most people consider this to be a myth, the truth is there are still women in certain sections of our society who are not allowed to worship the Monkey God. While some say that women can worship but should not touch the idol.

The place where Lord Hanuman was born