15 amazing Facts You Should Know About Tirupati Balaji

The Tirumala Hill is 853m above sea level and is about 10.33 square miles (27 km2) in area. It comprises seven peaks, representing the seven heads of Adisesha thus earning the name Seshachalam. The seven peaks are called Seshadri, Neeladri, Garudadri, Anjanadri, Vrushabhadri, Narayanadri and Venkatadri.

Situated in the Chittoor district of Andhra Pradesh, The Tirupati Balaji temple is one of the most sacred sites of Hindus, It is truly believed that life of a Hindu is not fulfilled until he visits this temple once in his Lifetime.

Famous celebrities like Amitabh Bachchan and others have visited this temple very often. People are often found wearing Tirupati Balaji bracelets as a symbol of Lord Venkateswara. The jewelry related to this temple is said to be holy and blissful.

Tirupati Balaji Facts You Should Know

1. This temple holds immense significance for people belonging to Hinduism. According to Hinduism, there is a total of 8 Vishnu Swayambhu Kshetras and The Tirupati Balaji Temple is one of them. It is also regarded as one of the 106 Divya Desam or Vishnu Temples (mentioned by Tamil Azhwar saints) that are located within the earthly realms. 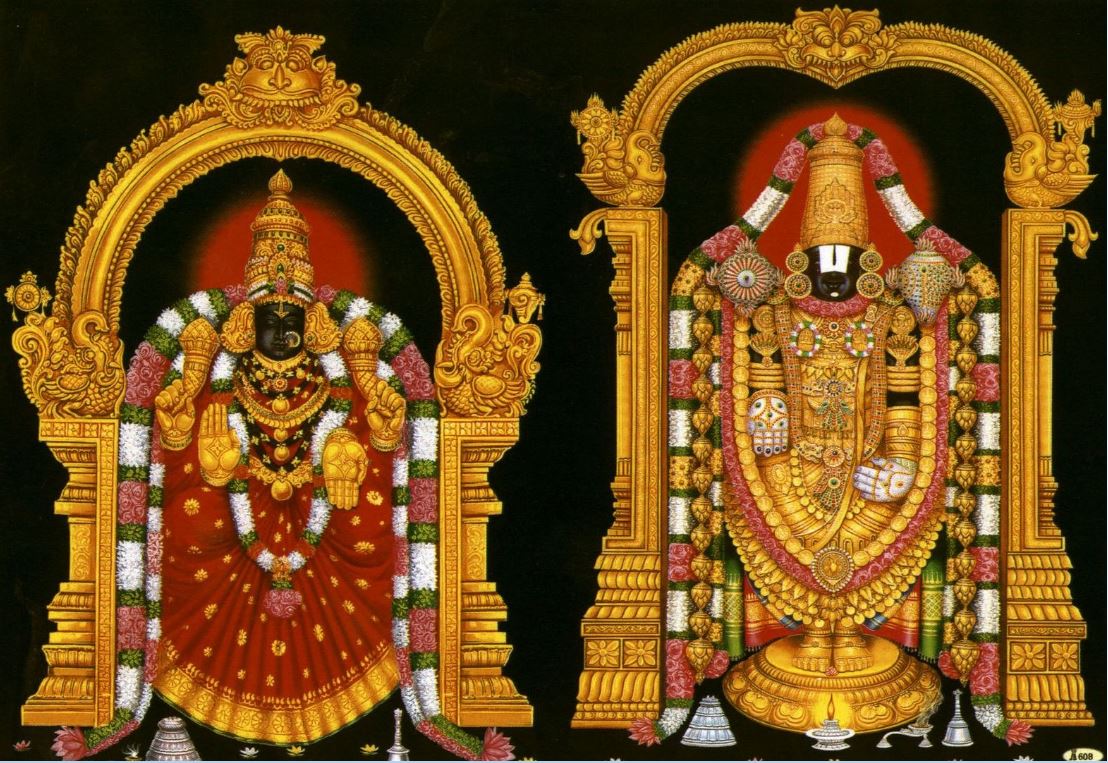 3. This view of Tirumala hills from down in Tirupati.

4. Tirupathi laddu has a GI Patent making it arguably the first offering at a place of worship anywhere in the world to be recognized as an intellectual property (IP)—in this case, of the Tirumala Tirupati Devasthanams (TTD), a trust that manages the temple at Tirupati. The GI status is granted to identify a product as having a specific provenance, and with a certain quality or reputation associated with that origin. Kashmir pashmina, Darjeeling tea and Kancheepuram silk have all been granted GIs. 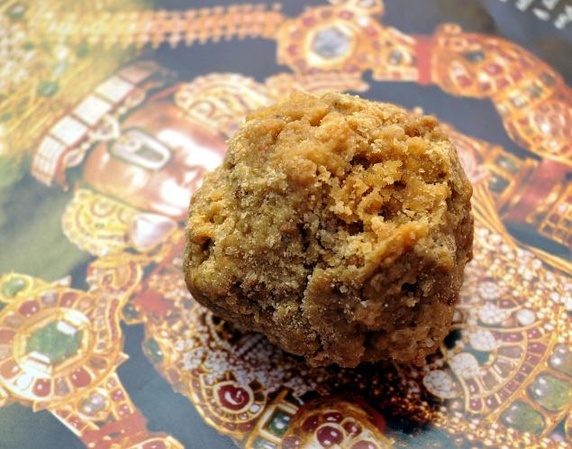 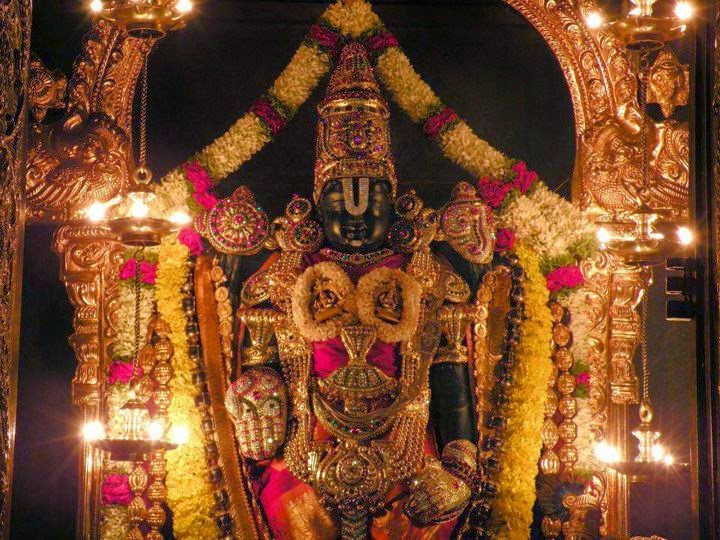 6. The Arch at the entrance of Tirumala Hills, which resembles the hood of a serpent is considered unique in the world. It is said that main deity in Tirumala temple is of the same height as the height of the Arch. Lord Vishnu is said to have put his first foot down at a place called Padalu, which is the highest point of Tirumala hills, Second step at the location of the arch and the next step is stated to have been placed where his idol is now worshipped in the temple at Tirumala. 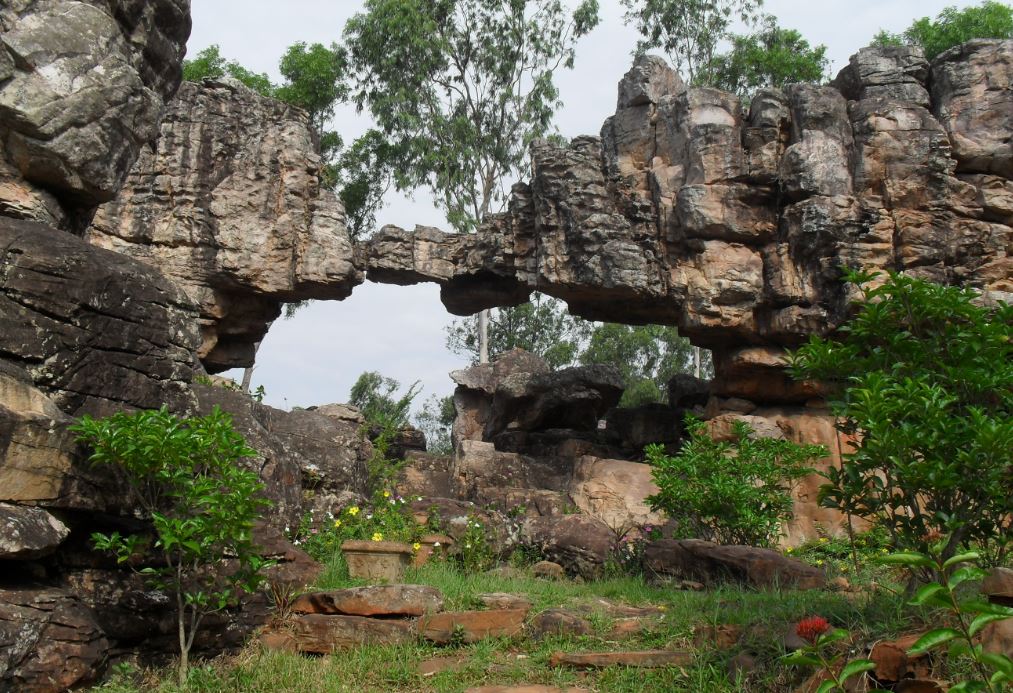 7. The Idol of Balaji is adorned with ‘Pachai Karpooram’, from Cinnamomum camphora, which is a highly volatile substance,daily.      If applied to a stone, it will form Cracks. But not so in Lord Balaji’s case. 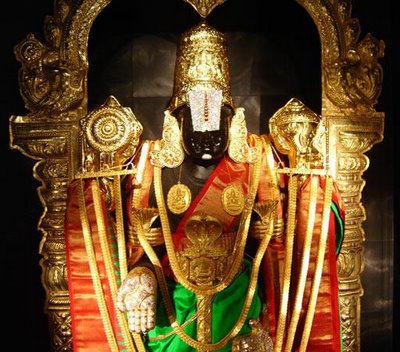 9. In 1800, the temple was said to be closed for 12 years. One King is said to have punished. 12 people (who committed some crime) by killing them and hanging them on the walls of the temple. They say that, it was at this time that Vimana Venkateshwara Swamy appeared..! 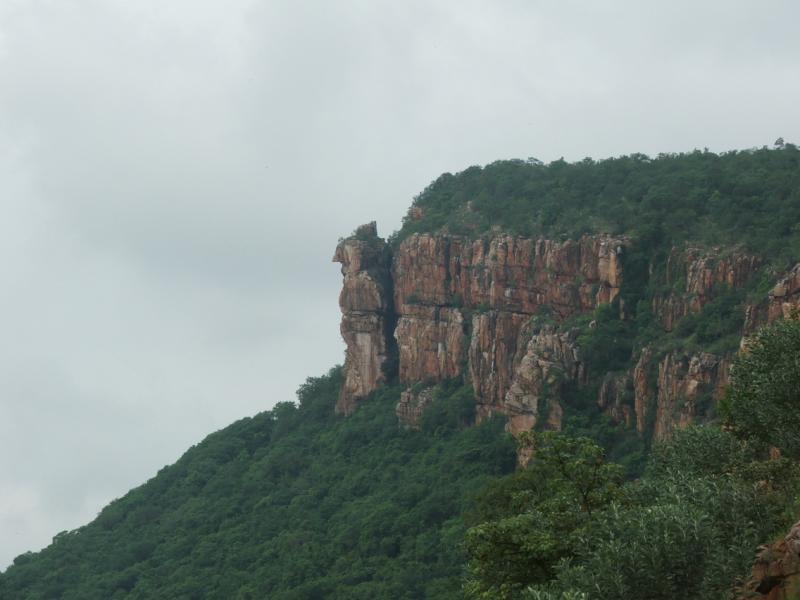 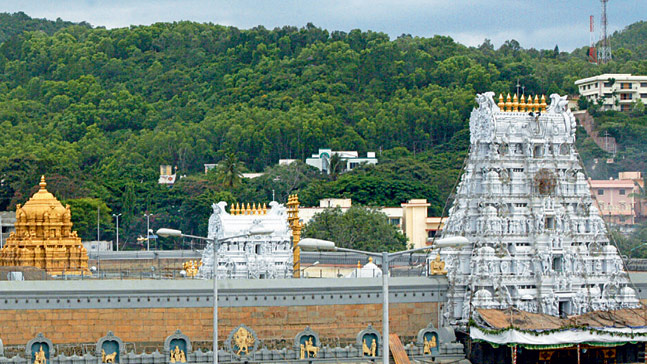 13. At the entrance of the main door, to the right side, a stick which was used by Ananthaalvar to hit Venkateshwara Swamy is present. When this stick was used to hit the ‘small boy’ Venkateshwara, his chin was hurt. Since then, the practice and tradition of applying Sandalwood paste on Swamy’s chin began. 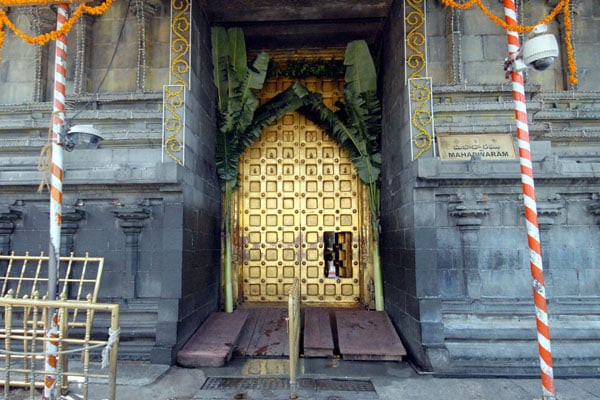 14. It remains a miracle that there is real hair on the main idol of Venkateswara Swamy. The authorities say that this hair never tangles and is silky smooth always. 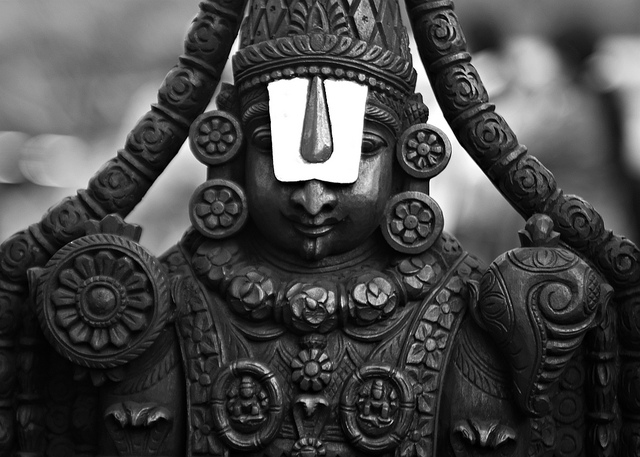 15. The flowers used in the sanctum will be never brought out of the sanctum. These flowers are leaved(facing forward and leaving behind) in an small water fall that exists behind the idol of the swamy.

Sri Venkateswara Swamy Temple is a landmark Vaishnavite temple situated in the hill town of Tirumala at Tirupati in Chittoor district of Andhra Pradesh, India. The Temple is dedicated to Lord Venkateswara, an incarnation of Vishnu, who is believed to have appeared here to save mankind from trials and troubles of Kali Yuga. Hence the place has also got the name Kaliyuga Vaikuntham and Lord here is referred to as Kaliyuga Prathyaksha Daivam. The temple is also known by other names like Tirumala Temple, Tirupati Temple, Tirupati Balaji Temple. Venkateswara is known by many other names: Balaji, Govinda, and Srinivasa.

The Tirumala Hills are part of Seshachalam Hills range. The hills are 853 metres (2,799 ft) above sea level. The Hills comprises seven peaks, representing the seven heads of Adisesha. The seven peaks are called Seshadri, Neeladri, Garudadri, Anjanadri, Vrushabhadri, Narayanadri and Venkatadri. The temple lies on the seventh peak -Venkatadri, on the southern banks of Sri Swami Pushkarini, a holy water tank. Hence the temple is also referred to as “Temple of Seven Hills”. Tirumala town covers about 10.33 sq mi (26.75 km2) in area.

The Temple is constructed in Dravidian architecture and is believed to be constructed over a period of time starting from 300 AD. The Garbagriha(Sanctum Sanctorum) is called AnandaNilayam. The preciding deity, Venkateswara, is in standing posture and faces east in Garbha griha. The temple follows Vaikhanasa Agama tradition of worship. The temple is one of the eight Vishnu Swayambhu Kshetras and is listed as 106th and the last earthly Divya Desam. The Temple premises had two modern Queue complex buildings to organize the pilgrim rush, Tarigonda Venkamamba Annaprasadam complex for free meals to Pilgrims, hair tonsure buildings and a number of pilgrim lodging sites.

It is the richest temple in the world in terms of donations received and wealth. The temple is visited by about 50,000 to 100,000 pilgrims daily (30 to 40 million people annually on average), while on special occasions and festivals, like the annual Brahmotsavam, the number of pilgrims shoots up to 500,000, making it the most-visited holy place in the world.[6]

There are several legends associated with the manifestation of the Lord in Tirumala. According to one legend, the temple has a murti (deity) of Lord Venkateswara, which it is believed shall remain here for the entire duration of the present Kali Yuga.

Tirumala Tirupati Devasthanams (TTD) is the trust board (of Tirupati Balaji Temple) which oversees and manages the operations of Tirumala Venkateswara Temple. It is operated by a Board of Trustees that has increased in size from five (1951) to eighteen (2015) through the adoption of Acts. The daily operation and management of TTD is the responsibility of an executive officer who is appointed by the Government of Andhra Pradesh.