How do people around the world celebrate New Year’s Day? When it comes to celebrating the New Year it seems that everyone has their own peculiar way of doing things. Some people throw bread, others burn scarecrows, and still others fist fight for good luck. These are the 25 strangest New Year’s traditions from around the world.

While at any other time of the year breaking dishes might be considered bad luck, on the eve of the New Year in Denmark, it’s anything but. An old custom for both the New Year and the night of a wedding, a truck rolls into towns and villages a few days before the end of December with ceramic seconds. In Denmark they save all of their unused dishes and plates until the 31st of December when they affectionately shatter them against the doors of all their friends and family. People then proceed to pack their homes full of cracked plates and dishes in preparation for the midnight celebration. As the clocks strikes 12 on New Year’s Eve, people rush around throwing plates at their neighbors’ doorsteps. The more broken plates you have outside your house, the better your luck in the year to come.

In Ecuador they celebrate the New Year by burning paper filled scarecrows at midnight. They also burn photographs from the last year. All in the name of good fortune. To banish any ill fortune or bad things that happened in the past year, Ecuadorians set fire to scarecrows filled with paper at midnight on New Year’s Eve. They also burn photographs of things that represent the past year, which leads us to believe that New Year is just a thinly veiled excuse for Ecuadorian pyromaniacs to set things on fire.

In Spain, if you can manage to stuff 12 grapes in your mouth at midnight you’ve achieved good luck for the next year. As the clock counts down to 12 and people around the world are preparing to watch fireworks and drunkenly kiss each other, Spaniards are staring at bunches of grapes with a steely gaze. This challenge involves stuffing your face with 12 grapes, one for every ring of the bell. Succeed and you’ve got good luck for the year ahead.

In the Philippines it’s all about the cash. They believe that everything should be round so as to represent coins and bring wealth. Round food, round clothes, as long as it’s round. In the Philippines New Year is about one thing, and one thing only; cold hard cash. Hoping to bring prosperity and wealth for the year ahead, Filipino people try to use as many round things as possible to represent coins and wealth. Round clothes, round food, you name it; if it’s round, they want in.

In some South American countries wearing colored underwear will determine your fate for the new year. Red underwear means you’ll find love. Gold means wealth, and white signifies peace. In South American countries such as Mexico, Bolivia and Brazil, your fortunes for the year ahead are all decided by your underpants. Those who want to find love wear red underwear for New Year, whilst gold diggers should opt for yellow, which brings wealth and luck. If you’re just after a bit of peace for the New Year, some white pants should do the trick nicely.

In Japan they ring all of their bells 108 times in alignment with the Buddhist belief that this brings cleanness. It’s also considered good to be smiling going into the New Year as it supposedly brings good luck. Think the countdown of 12 rings takes too long? Try 108 on for size. In Japan bells are rang 108 times in a Buddhist tradition that is believed to banish all human sins. It’s also good luck to be smiling or laughing going into the New Year, but who knows how you can be in a good mood after having to sit through that prolonged ringing.

Every year at the end of December people in this small Peruvian village fist fight to settle their differences. They then start the year off on a clean slate. This annual Peruvian festival held at the end of December is all about people beating the living daylights out of each other. Competitors face off in a ring for a round of bare-knuckle brawling, which is overseen by local policemen. Takanakuy literally means ‘when the blood is boiling’, but apparently all of the fights are friendly, and represent a fresh start for the year.

In Switzerland they celebrate the New Year by dropping ice cream on the floor.

In Romania they throw their spare coins into the river to get good luck.

In some parts of Puerto Rico they throw pails of water out of their windows to drive away evil spirits.

In Belgium they take their livestock seriously. At least seriously enough that the farmers wish their cows a happy new year! 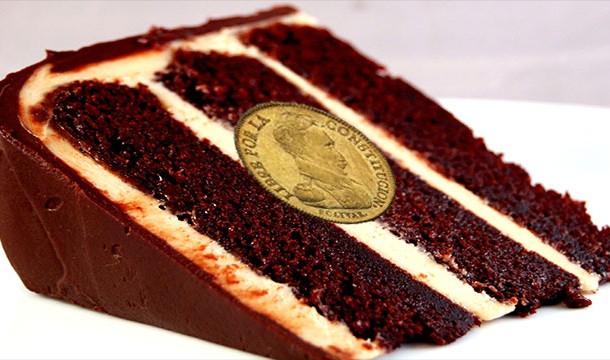 In Bolivia coins are baked into sweets and whoever finds the coins has good luck for the next year.

The french like to keep things simple and delicious. Every new year they consume a stack of pancakes.

In Colombia they carry their suitcases around with them all day in hopes of having a travel filled year.

In Denmark people climb on top of chairs and literally “jump” into the New Year to bring good luck.

Besides throwing buckets of water on each other in Thailand they also go around smearing each other with gray talc.

In Chile families spend the night in the company of their deceased loved ones by sleeping at the cemetery.

Just like in Belgium, Romanian farmers try to communicate with their cows. If they succeed, however, then it means bad luck for the year.

Just as you might expect, in Siberia they jump into frozen lakes carrying tree trunks

In Finland people predict the coming year by casting molten tin into a bucket of water and interpreting the resulting shape.

In Scotland the first person to cross the threshold of a home in the new year should carry a gift for good luck.