A fence in rural New Zealand is covered in bras, and not everyone is happy about it. The Cardrona Bra Fence is a controversial tourist attraction in the Cardrona Valley, New Zealand, began in 1999 some time between Christmas and New Year, when four women’s bras were found attached to the wire fence alongside the road. 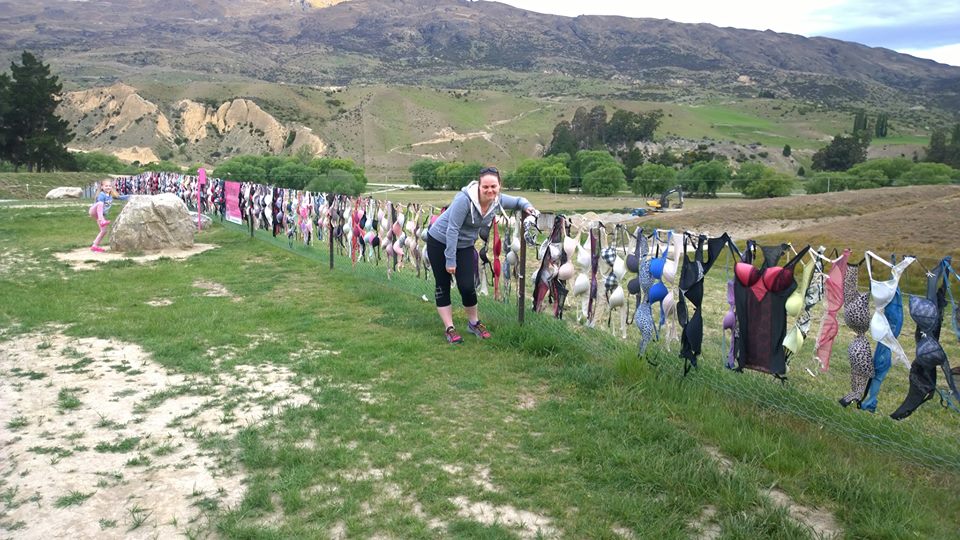 The site has been a controversial tourist attraction for years. it soon became very popular and over the years the bras hanging on the fence grew to hundreds. 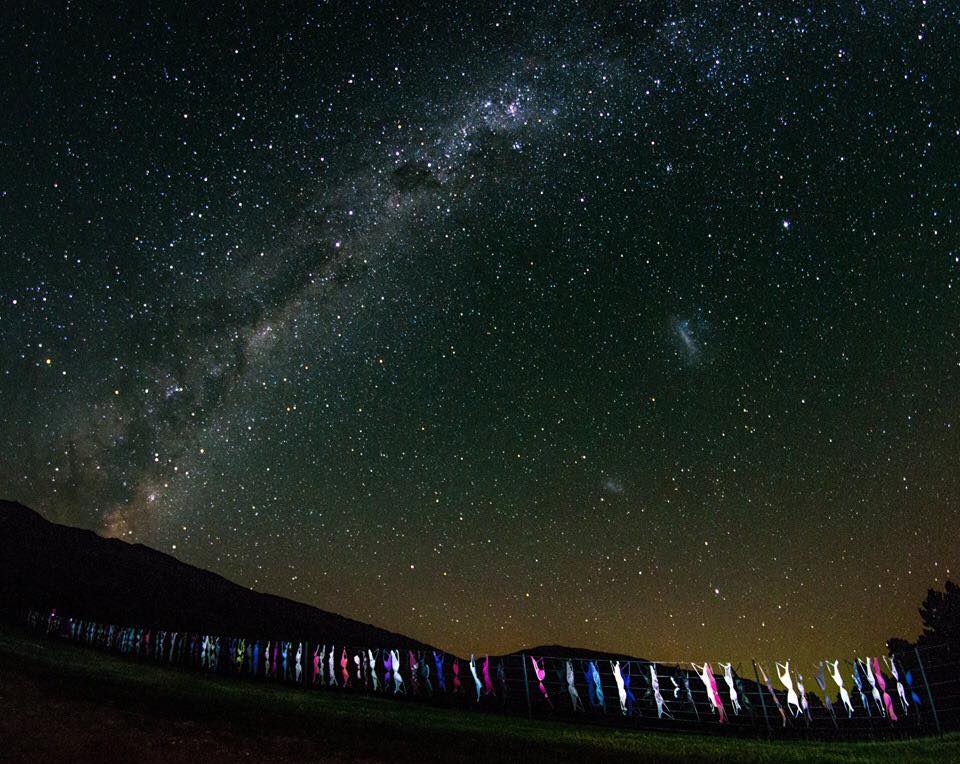 People from all over the world visiting New Zealand would go to the Cardrona Valley just to tie their bra to it. In the following years the bra population multiplied to thousands and the fence became a unique tourist attraction gaining worldwide attention. 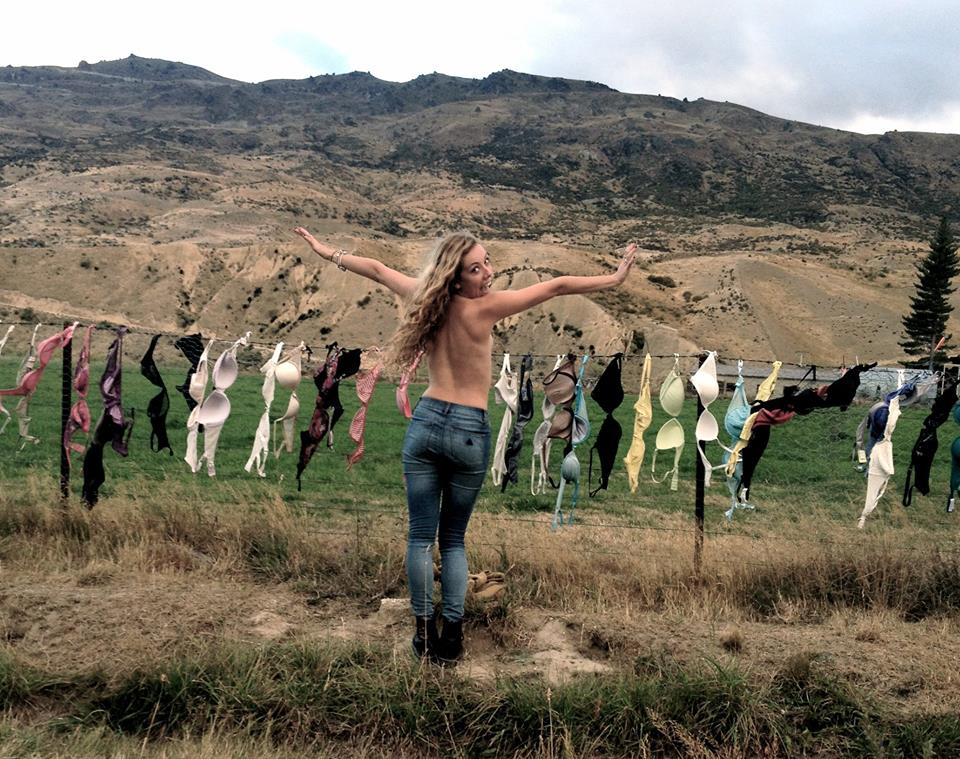 Unfortunately, not everyone was pleased. Some viewed the fence as an eyesore and embarrassment and also as a potential hazard to drivers using the road. Over the years, the fence was stripped off the bras on numerous occasions. But the bras returned each time. The first attempt at clearing was made just two months after the first bras were attached. Another attempt was made in October 2000 when a few unknown persons removed some 200 bras from the fence. In 2006, even the Queenstown Lakes District council stepped in and removed 1,500 bras from the fence. But the fence started rebuilding its collection again. Later that year, an attempt to make the world’s longest bra chain was made. The world record fell woefully short by more than 100,000 bras but managed to raised over $10,000 for charity. 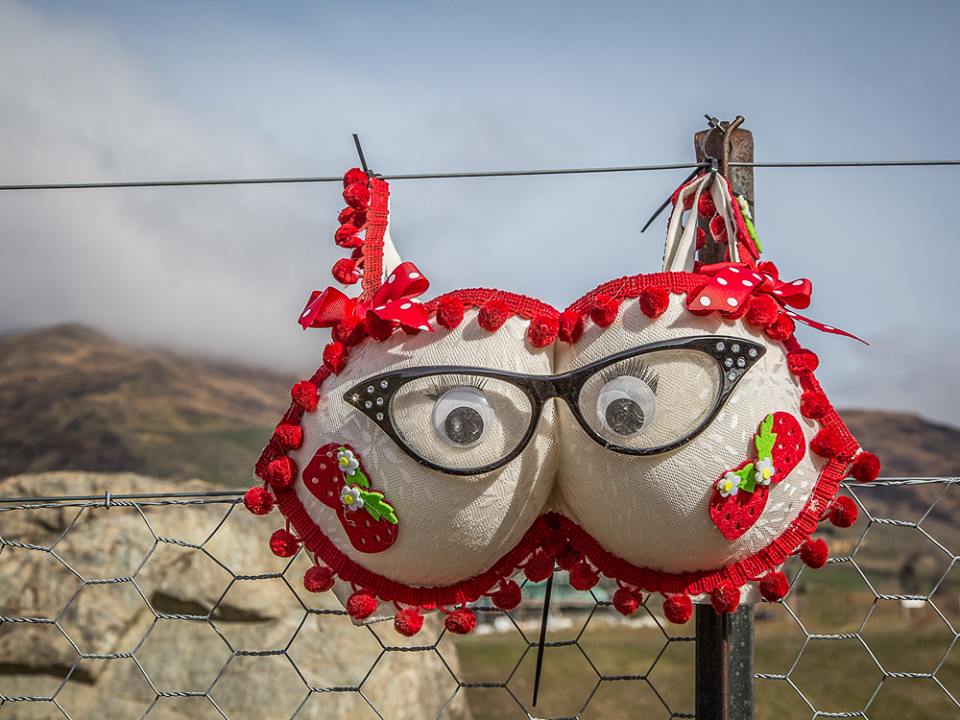 The Cardrona Bra Fence continues to be attacked periodically, and depending on when you visit, you might or you might not see the undergarments. But rest assured, the bras will return. 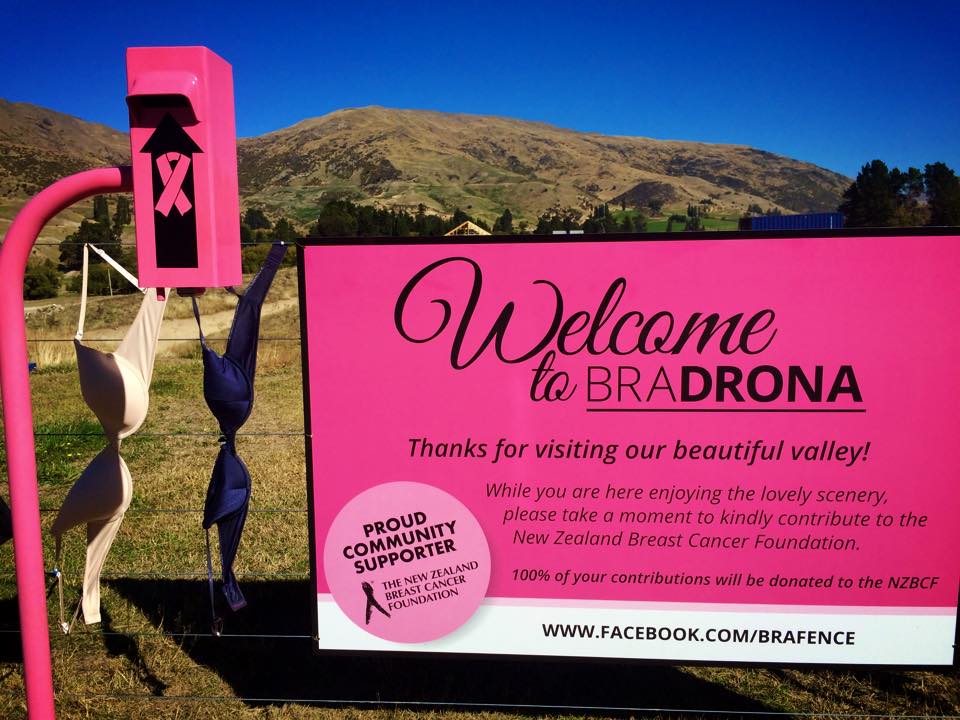 Cardrona’s infamous bra fence has been cheekily rebranded “Bradrona” to raise money for breast cancer. A pink sign and collection box was put up a week ago beside the fence, which now runs along the driveway to The Cardrona, a quad bike and horse trek business at the bottom of the Snow Farm Rd. By today it was full, raising nearly $200 for the Breast Cancer Foundation. The box has been emptied and the money was being banked. 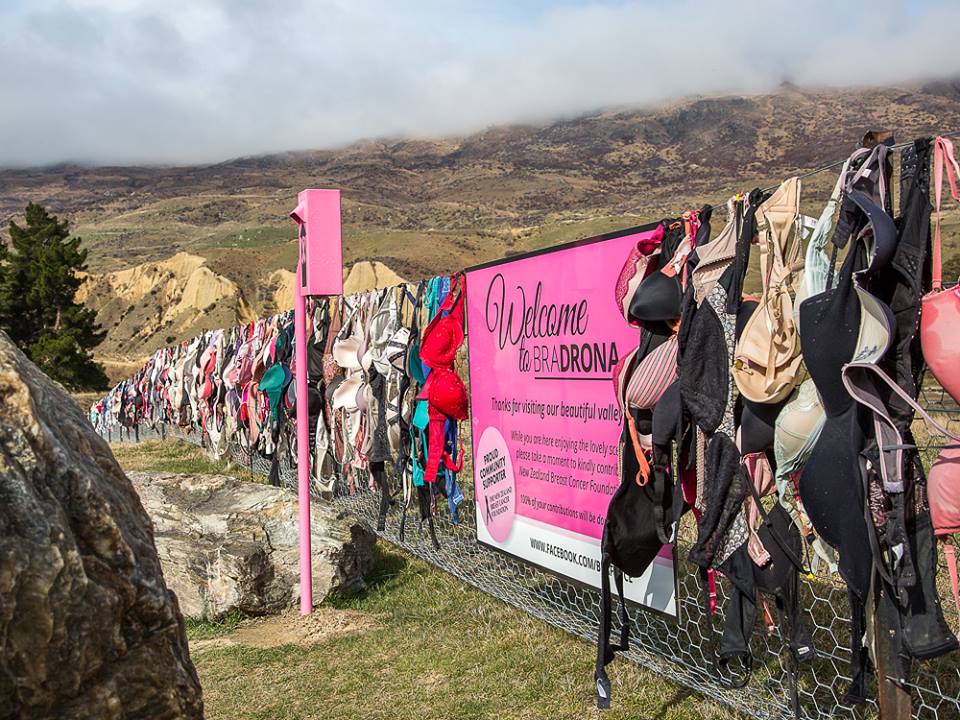 They shifted the fence from beside the Cardrona Valley Rd to their driveway in November because it was being regularly targeted by unknown scissor-wielding fence objectors who apparently preferred a bare fence.

Bras Stolen by Unknown Thieves In 2014: 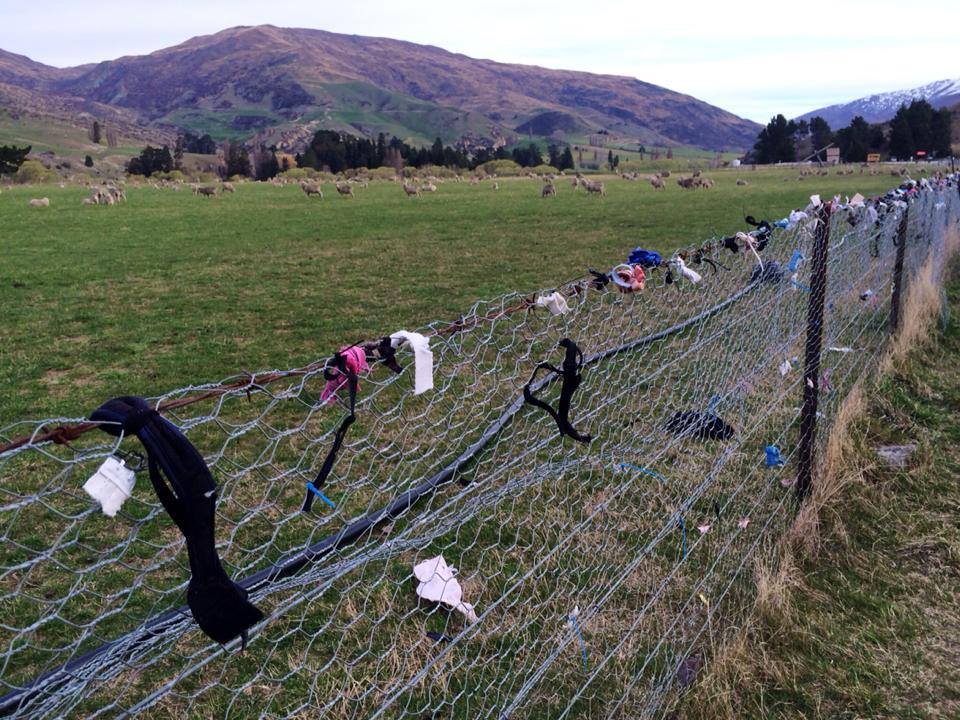 Thieves regularly stealing bras from the Cardrona Valley Bra Fence in New Zealand have been warned by locals to keep their hands to themselves in future. For the past two years thieves have been stealing the bras off the fence, and in recent months there were regularly none to be seen on it at all. However, those who want to see the local tourist attraction remain are jumping out of their cups with anger. Tired of being taken for b**bs, the Cardrona Valley Bra Fence Facebook page has been updating its followers with tip-offs on who the thieves are. No one has been arrested by police yet, but the page is now asking its supporters to return to the fence with their ‘pre-loved’ bras to help recreate the attraction. 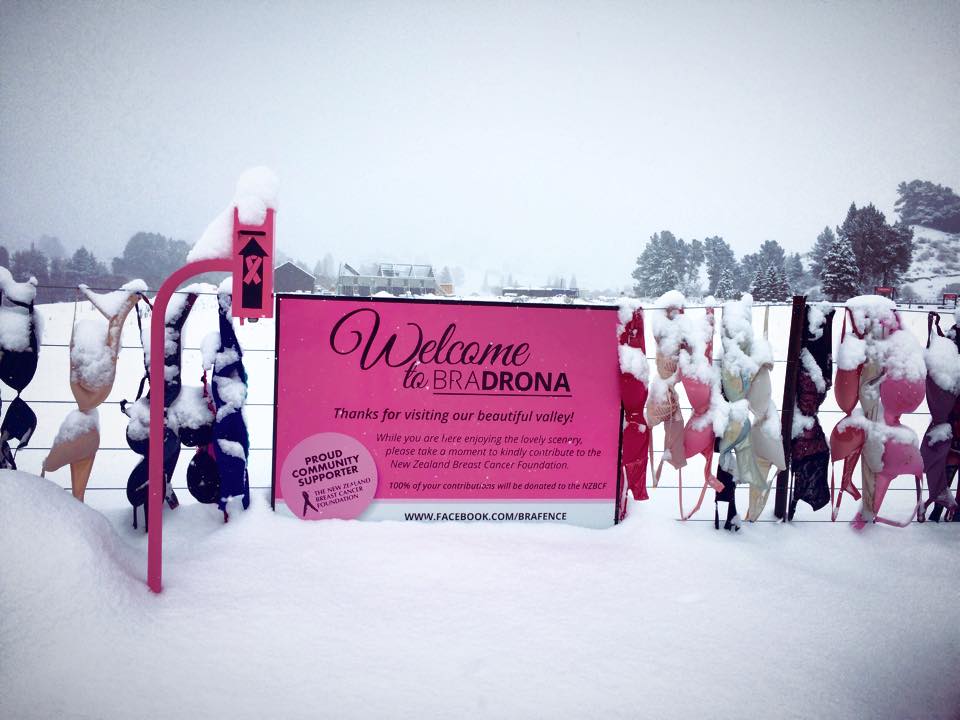