It’s Arkhangelsk High Security Penal Colony in Russia. There are about 1500 prisoners convicted for serious crimes. Yes, it’s not that Halden Fengsel 5-star prison in Norway.

IK-28, a maximum-security Russian penal colony, is located in Yertsevo, in the northern Arkhangelsk region near the Arctic Circle. It was once part of a cluster of camps founded in the late 1930s as part of the Gulag system. Today, it houses over 1,000 prisoners, many of whom were convicted on murder or terrorism charges. “Most of them killed two or more people,” says photographer Max Avdeev, who shot the prison in February 2010.

Given the growing number of Russian political prisoners who find themselves in jail—Mikhail Khodorkovsky, two members of the punk band Pussy Riot, and soon, opposition politician Alexey Navalny—we thought we’d show you what Russian penal colonies look like. This is one of the harsher ones.—Julia Ioffe 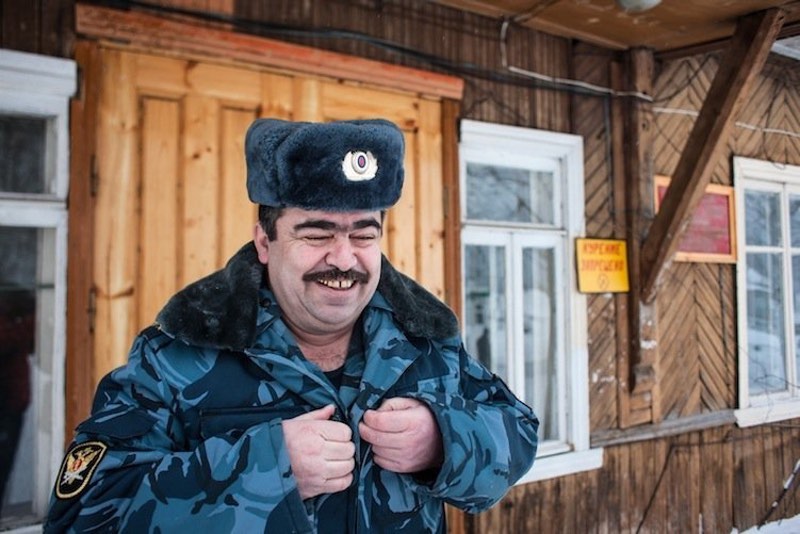 The head of the prison. 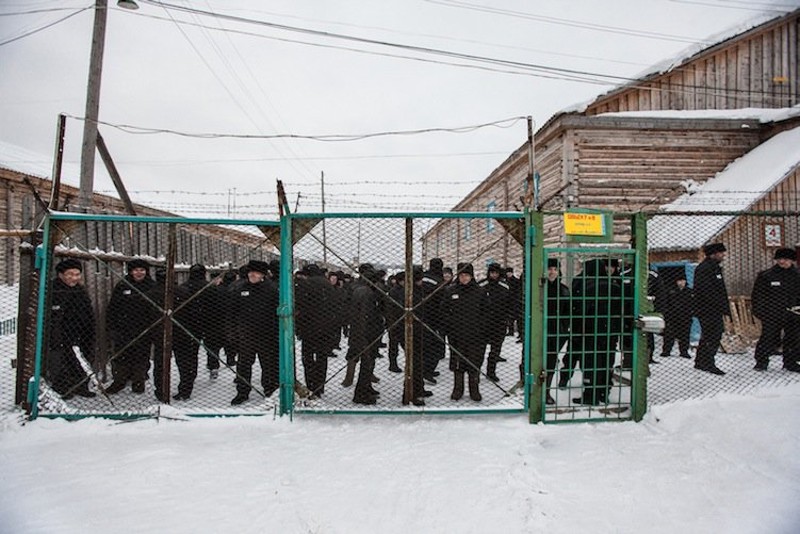 Prisoners are kept in distinct sectors to prevent them from sharing items and ideas with other groups. For example, prisoners convicted of terrorism charges (mainly from Chechnya) are kept together in one sector.

Although the term Gulag originally referred to a government agency, in English and many other languages the acronym acquired the qualities of a common noun, denoting the Soviet system of prison-based, unfree labor.

Even more broadly, “Gulag” has come to mean the Soviet repressive system itself, the set of procedures that prisoners once called the “meat-grinder”: the arrests, the interrogations, the transport in unheated cattle cars, the forced labor, the destruction of families, the years spent in exile, the early and unnecessary deaths. 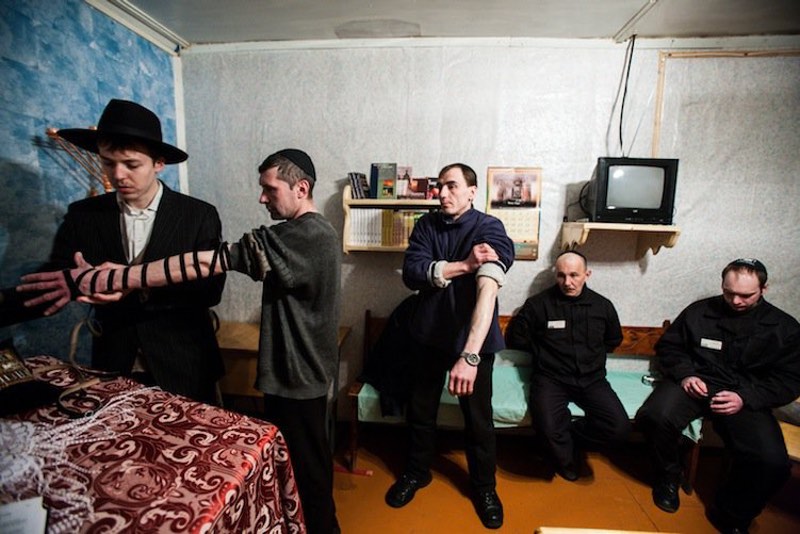 A young rabbi from Moscow leads a ceremony with Jewish prisoners. Prison authorities tolerate all religions, figuring that a practicing prisoner is less trouble than an idle one. 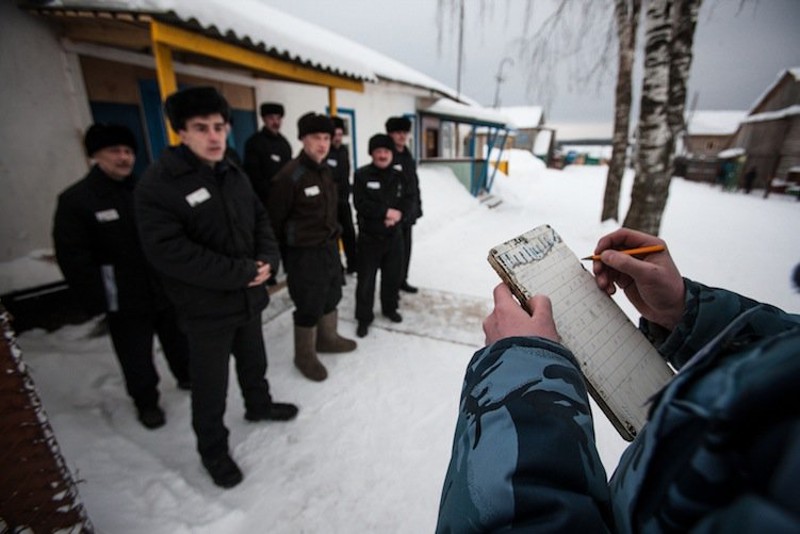 A roll call is taken three times a day.

Western authors use Gulag to denote all the prisons and internment camps in the Soviet Union. The term’s contemporary usage is notably unrelated to the USSR, such as in the expression “North Korea’s Gulag” for camps operational today. 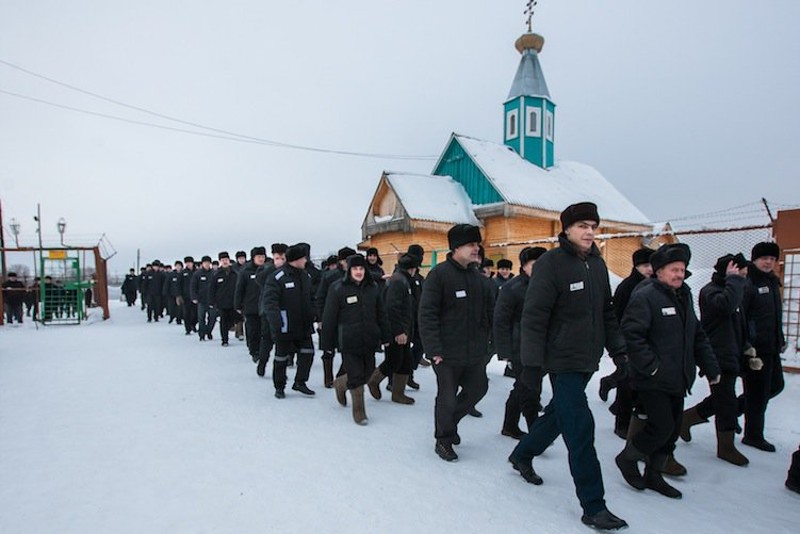 Prisoners return to their sectors after dining.

The word Gulag was not often used in Russian — either officially or colloquially; the predominant terms were the camps (лагеря, lagerya) and the zone (зона, zona), usually singular — for the labor camp system and for the individual camps. The official term, “corrective labor camp”, was suggested for official politburo of the Communist Party of the Soviet Union use in the session of July 27, 1929. 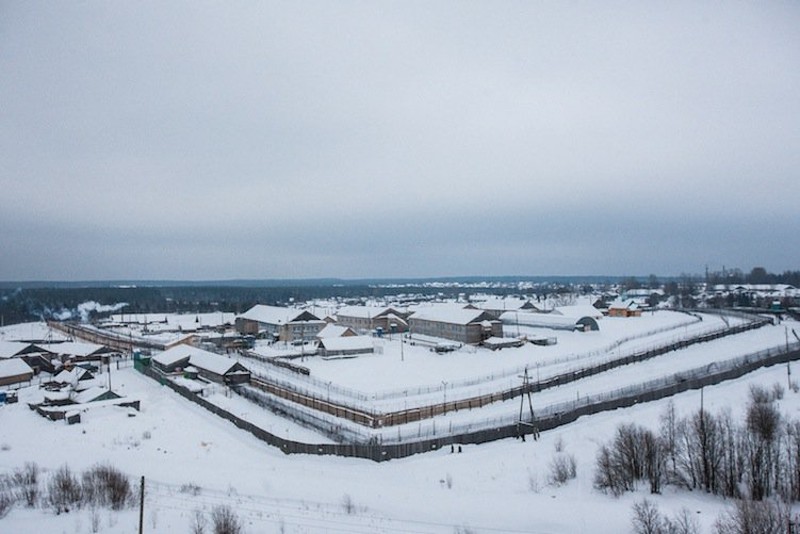 The prison and environs in winter. Guards are allowed to shoot an escaping prisoner after he has crossed the middle wooden fence. 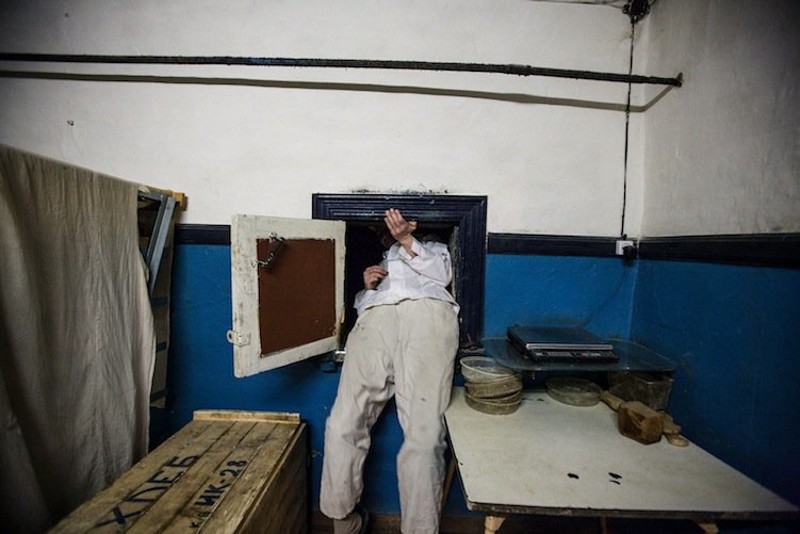 A prisoner working in the kitchen. 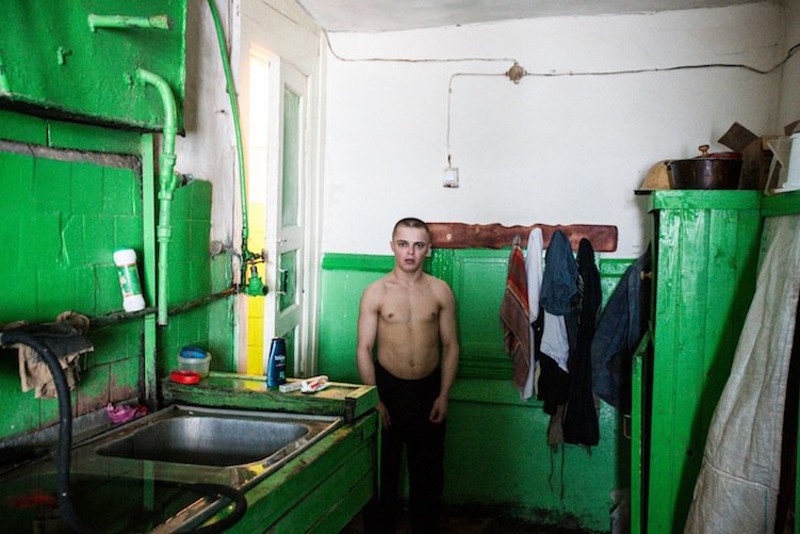 This prisoner killed a man who was nearly 10 inches taller, and did so “without special devices”—that is, with his hands. 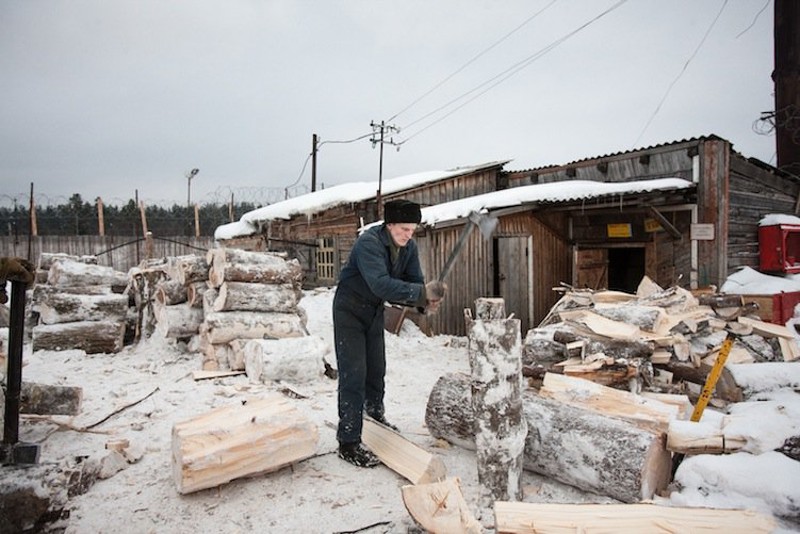 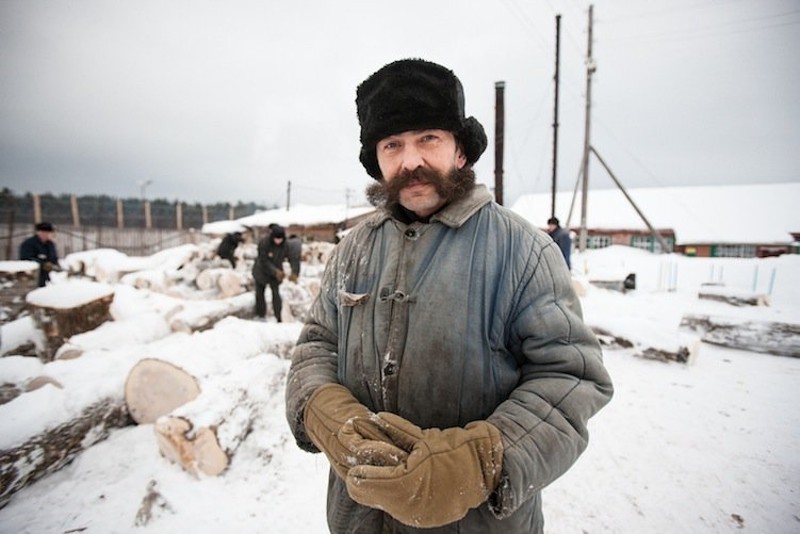 This inmate was allowed to keep his mustache after proving that it was a part of his family heritage dating back to the 16th century. 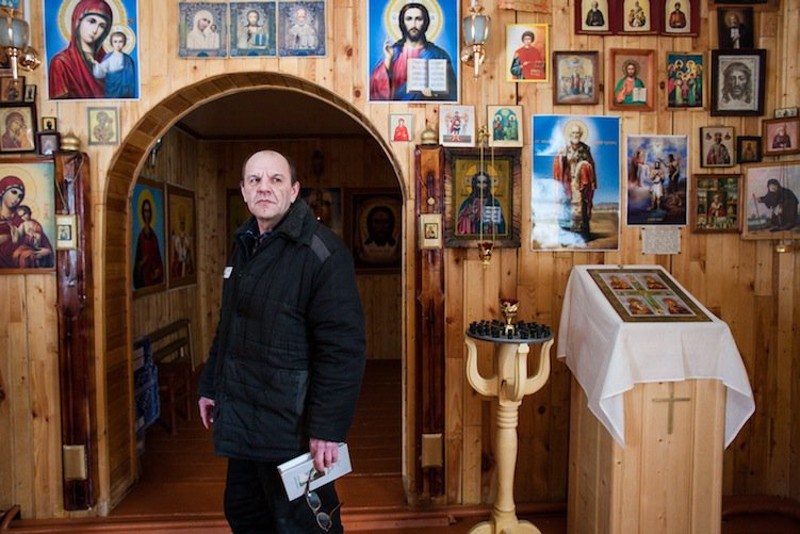 This inmate oversees the prison’s Russian Orthodox church, which is attended by about 30 inmates. The sign reads, “Every employee is a teacher and a controller.” 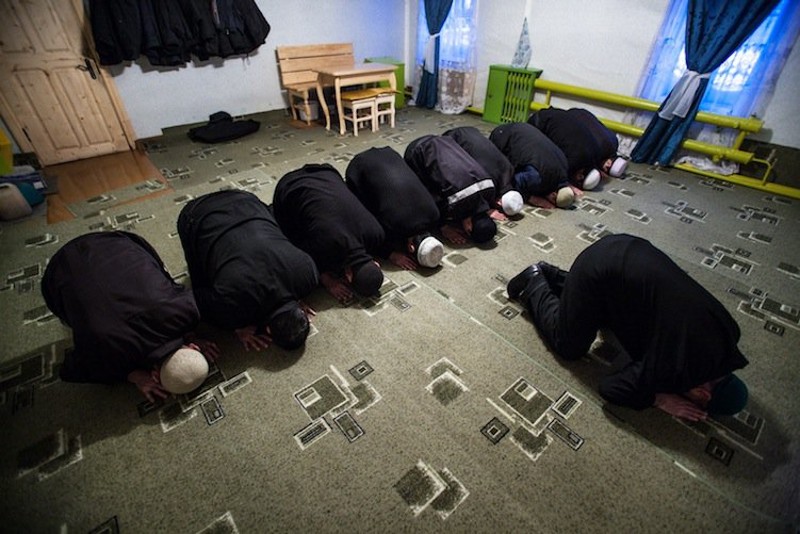 A prayer room for Muslims. This prisoner runs the library. 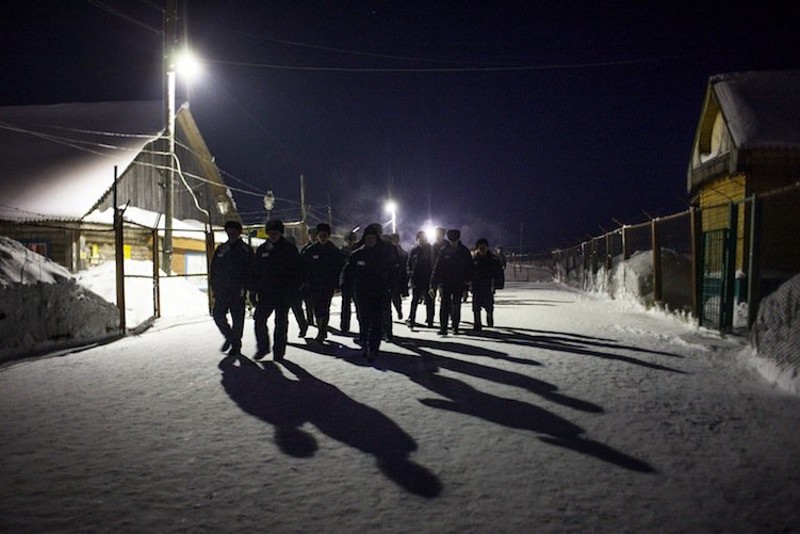 Workers return to their sector at night. 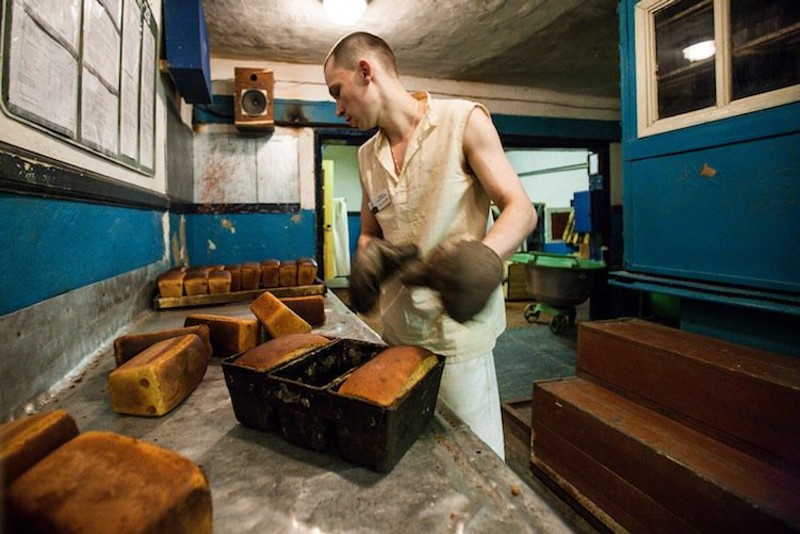 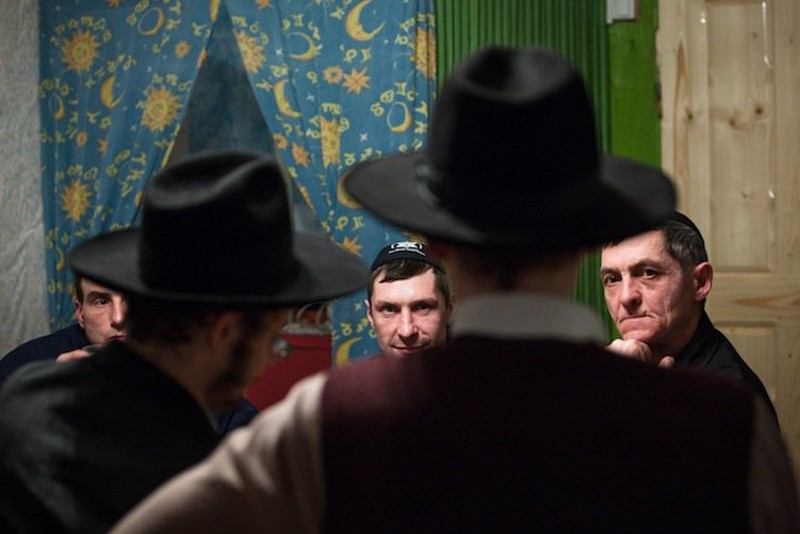 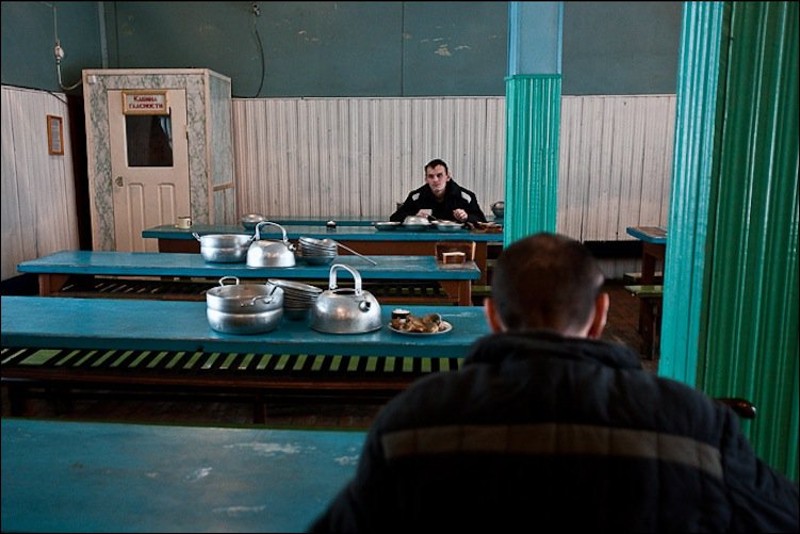 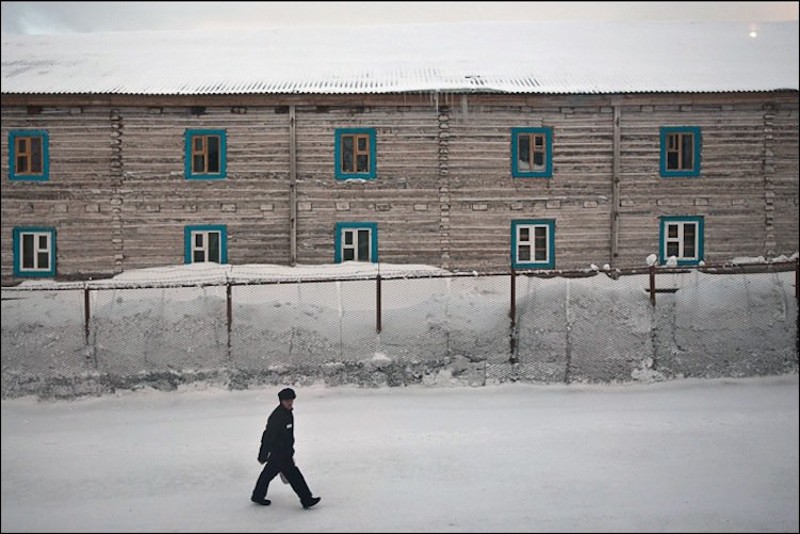 A prisoner who has been transferred to another prison returns his mattress. 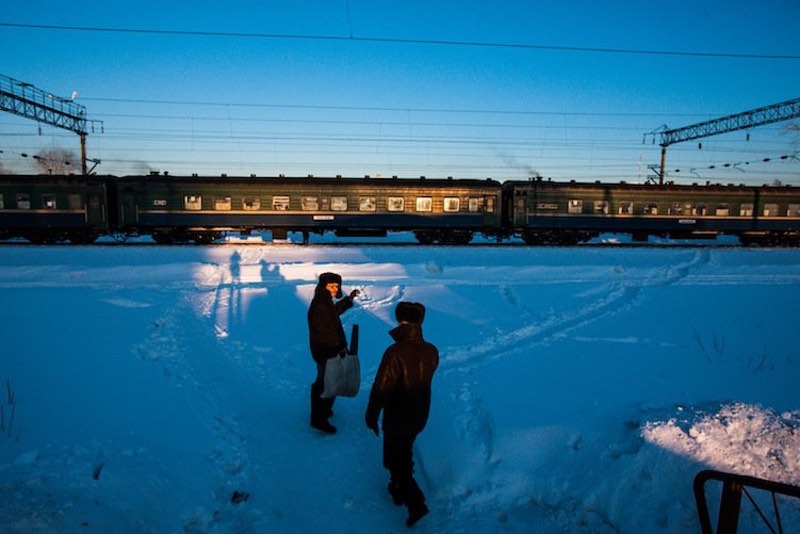 Locals near the railway station. There are two trains a day out of Ercevo—one to Arkhangelsk in the morning, and one to Moscow in the evening. These prison guards are on a 2-hour, 25-kilometer trip for a shift change with guards at a colony-settlement of about 100 non-dangerous prisoners. It’s about -31ºF outside, and around 10ºF inside the truck. 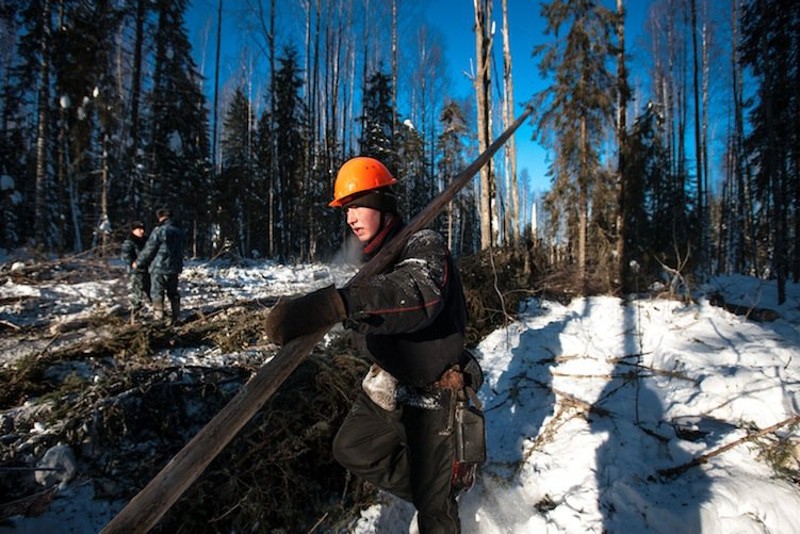 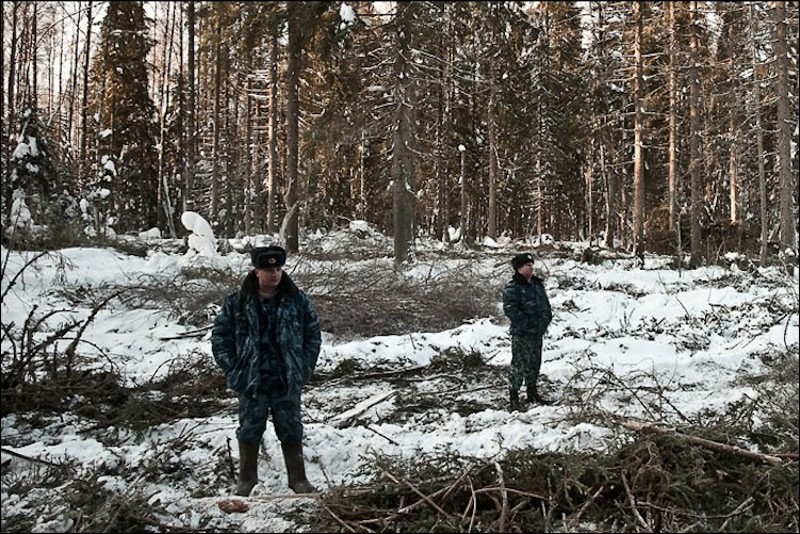 Guards form a perimeter, discouraging prisoners from making a run for it.

Before You Go Watch YouTube Video Of Russia’s toughest prisons

About 14 million people were in the Gulag labor camps from 1929 to 1953 (the estimates for the period 1918–1929 are even more difficult to calculate). A further 6–7 million were deported and exiled to remote areas of the USSR, and 4–5 million passed through labor colonies, plus 3.5 million already in, or sent to, labor settlements. According to some estimates, the total population of the camps varied from 510,307 in 1934 to 1,727,970 in 1953. According with other estimates, at the beginning of 1953 the total number of prisoners in prison camps was more than 2.4 million of which more than 465,000 were political prisoners. The institutional analysis of the Soviet concentration system is complicated by the formal distinction between GULAG and GUPVI. GUPVI was the Main Administration for Affairs of Prisoners of War and Internees (Russian: Главное управление по делам военнопленных и интернированных НКВД/МВД СССР, ГУПВИ, GUPVI), a department of NKVD (later MVD) in charge of handling of foreign civilian internees and POWs in the Soviet Union during and in the aftermath of World War II (1939–1953). (for GUPVI, see Main Administration for Affairs of Prisoners of War and Internees). In many ways the GUPVI system was similar to GULAG. Its major function was the organization of foreign forced labor in the Soviet Union. The top management of GUPVI came from the GULAG system. The major noted distinction from GULAG was the absence of convicted criminals in the GUPVI camps. Otherwise the conditions in both camp systems were similar: hard labor, poor nutrition and living conditions, and high mortality rate.

For the Soviet political prisoners, like Solzhenitsyn, all foreign civilian detainees and foreign POWs were imprisoned in the GULAG; the surviving foreign civilians and POWs considered themselves as prisoners in the GULAG. According with the estimates, in total, during the whole period of the existence of GUPVI there were over 500 POW camps (within the Soviet Union and abroad), which imprisoned over 4,000,000 POW.

According to a 1993 study of archival Soviet data, a total of 1,053,829 people died in the Gulag from 1934–53 (there is no archival data for the period 1919–1934). However, taking into account the likelihood of unreliable record keeping, and the fact that it was common practice to release prisoners who were either suffering from incurable diseases or near death, non-state estimates of the actual Gulag death toll are usually higher. Some independent estimates are as low as 1.6 million deaths during the whole period from 1929 to 1953, while other estimates go beyond 10 million.

Most Gulag inmates were not political prisoners, although significant numbers of political prisoners could be found in the camps at any one time. Petty crimes and jokes about the Soviet government and officials were punishable by imprisonment. About half of political prisoners in the Gulag camps were imprisoned without trial; official data suggest that there were over 2.6 million sentences to imprisonment on cases investigated by the secret police throughout 1921–53. The GULAG was reduced in size following Stalin’s death in 1953, in a period known as the Khrushchev Thaw.

In 1960 the Ministerstvo Vnutrennikh Del (MVD) ceased to function as the Soviet-wide administration of the camps in favor of individual republic MVD branches. The centralized detention facilities temporarily ceased functioning.

The Gulag Archipelago is a three-volume book published in the West in 1973 detailing the gulag system. Written by Aleksandr Solzhenitsyn, who was himself imprisoned, this book gave many people their first real glimpse of what life was like in the Soviet Union. Along with his exhaustive research, Solzhenitsyn waxes philosophical, pontificating on the nature of evil in the human soul.

Solzhenitsyn’s reports left him perpetually under observation by the KGB. They did everything in their power to get their hands on his work, including torturing one of his typists, Elizaveta Voronyanskaya, who gave up the location of one of the manuscripts in September 1973 before hanging herself. Solzhenitsyn himself was arrested in February 1974 and exiled to West Germany, eventually settling in the US.

Not surprisingly, it was difficult to get the book published in the USSR. It was circulated for years in underground samizdat publications before appearing in part in a Russian literary journal called Novy Mir in 1989. Today, The Gulag Archipelago is required reading in Russian schools. Solzhenitsyn returned to Russia after the fall of the Soviet Union and died in Moscow on August 3, 2008, at age 89.

Know more about Gulag and Soviet Gulag camp on Wikipedia

1. Who Was Worse: Hitler Or Stalin ?
2. This Russian Girl Mechanic Getting Popular With Her Hobby
3. 22 Greatest Russian Inventions
4. Russian Submarine B 396 | An Inside Story
5. 10 Russian Signs Board Look Like Puzzle For Brain
6. What Does “Russia” Feed Their Great Soldiers!!
7. 9 Soldiers Face Photos Before And After Russian Airborne Service
8. Hilarious Photos Found On Russian Dating Sites